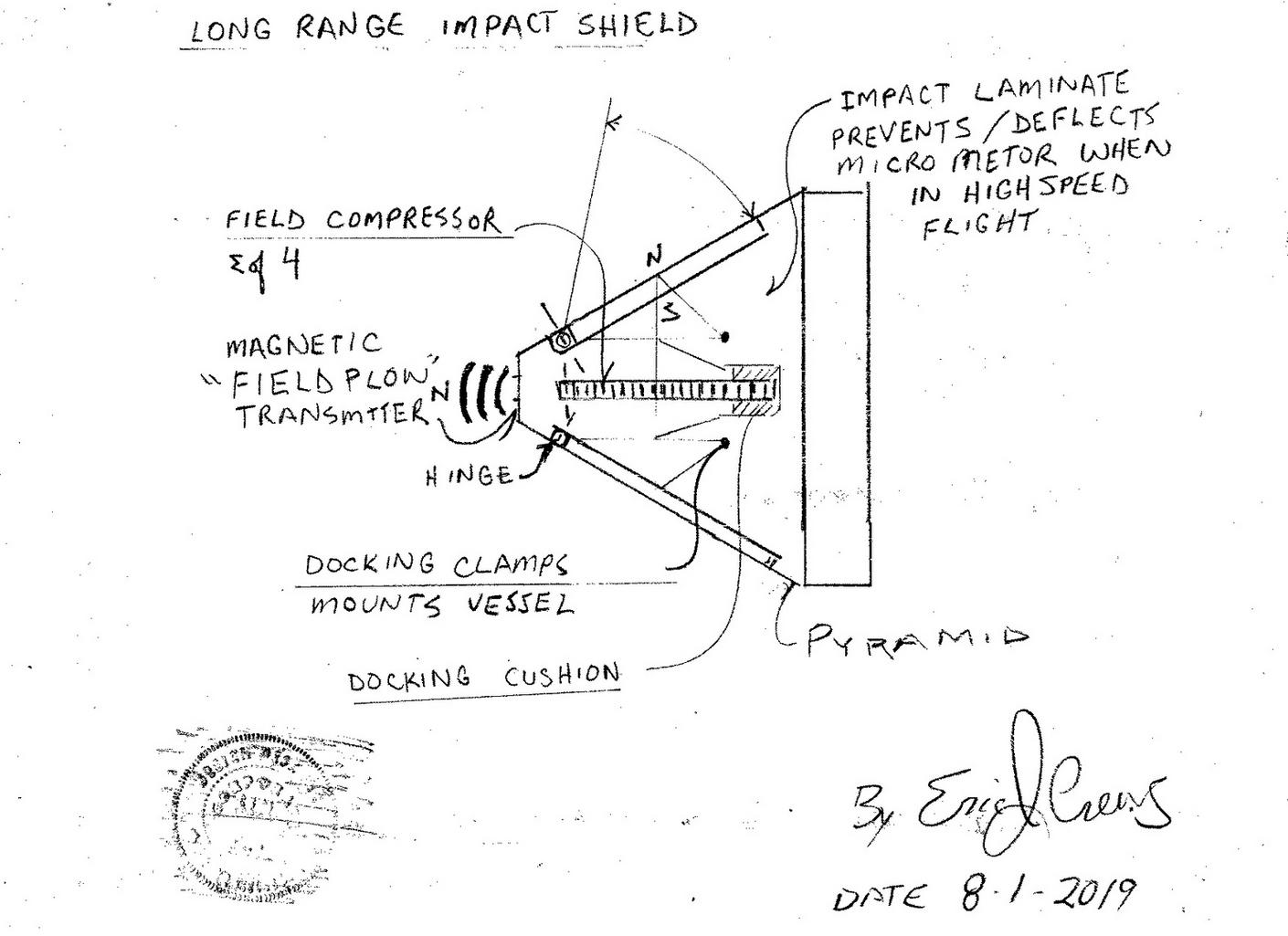 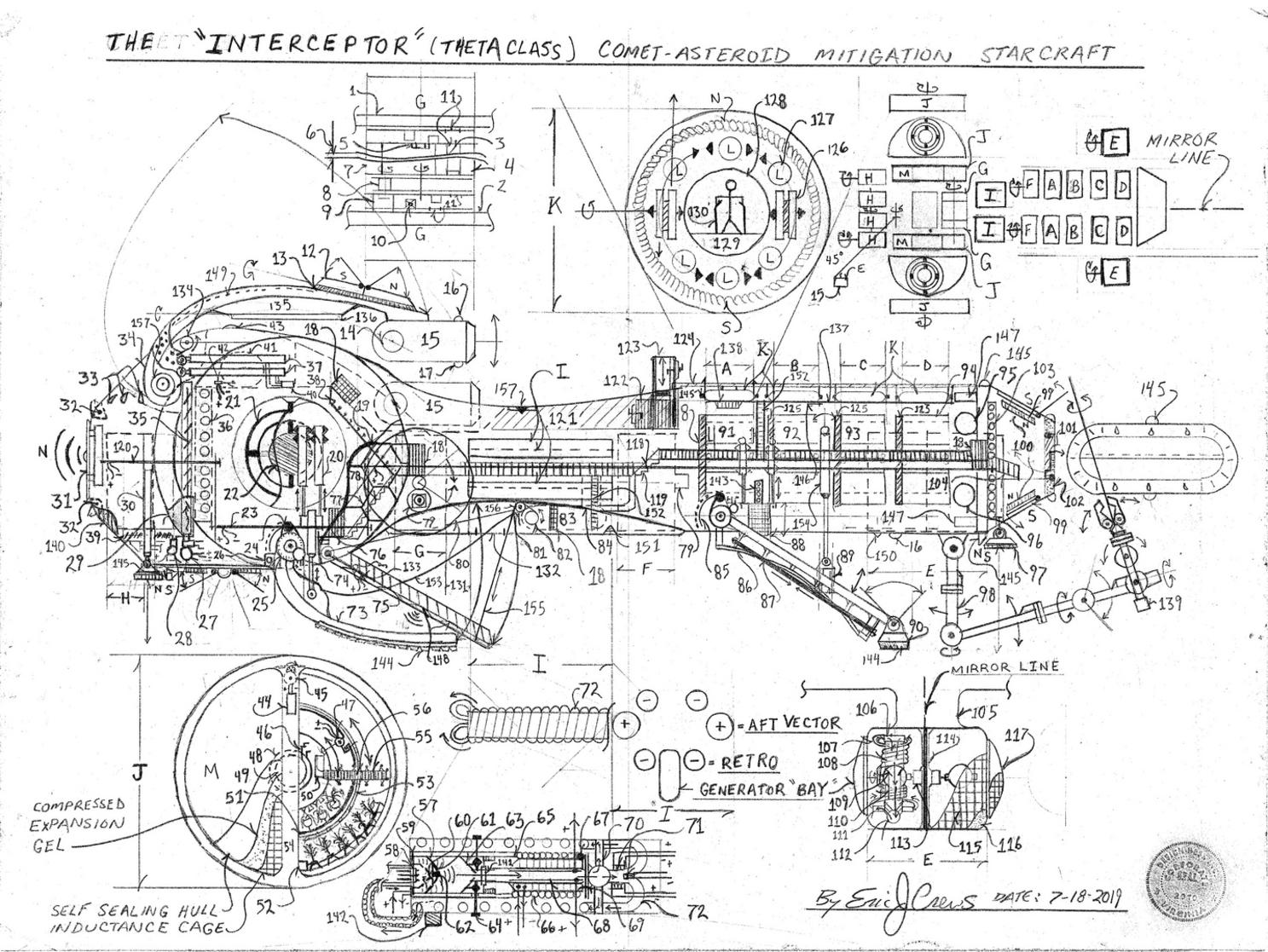 The following design system is a high speed long range craft to allow the capacity to then redirect an asteroid or comet that endangers the earth. The design system then may also serve as a ship of exploration, a mining craft or as defunct satellite retrieval system.  The design system then with slow re-entry capacity to not cause excessive heat upon the hull of the vessel due to atmospheric friction incurred by speed of flight. This lowers the total weight of the vehicle.

This vehicle is special... as the helm is then producing artificial gravity by centrifugal force allowing a more comfortable setting.

The design is then addressing a critical component of asteroid mitigation... ie... the "speed of response" / time... Currently,  addressing a NEO ( Near Earth Object / impactor ), the flight speed and power capacity to deal with the situation currently is not openly found present. This design is then using static compression and sealed flight hover motors that mimic anti gravity.. operating upon the vessel's "on board" fuel less generators to net capture a NEO with remote controlled flight disk and correct the NEO's trajectory before it could impact the Earth.

8. spin entry rotating entry system... matches the helms rotation to then walk from zero gravity to the spin

of the helm tumbler to walk into an artificial gravity. Spin entry contains required locked in safety harness.

craft, the hydraulic assembly then able to "tilt" mounted upon a pivot hinge to allow for correct landing

with hydraulic draft accelerator upon the center flight deck). The spherical positional flight mobile then

impeller (centrifugal type) to then allow for the vector of the the force of the flight deck. The electric servos

for data to extrapolate force vector allowing for high speed course correction. The flight mobile then

via solenoid and or by manual mechanical reversible ratchet

27. H.V.A.C. climate control refrigeration compressor banks each side of the craft total of eight compressors

with system rerouting to compensate should component fail

refrigeration system by the H.V.A.C. master flow switch to melt the water in the ice tank.

29. refrigeration evaporator - causes the water in the water tank to freeze better protecting the core of the

31. magnetic field forward electromagnets -  has the capacity to "launch" magnetic bubbles to act as a high

change it's course in minute fashion

51. algae bio reactor growth coils and pump cycle system - transparent with the CO2 from the sip being able

63. electron compression venturi "funnel" magnetic to then assist in channeling the random electrons

to a pressurized flow

67. cooling systems location redundant and back up flow re-route

68. electron absorption system - the electromagnetic "bottle" then by magnetic field causes the electron

cause "flow" at the feed pressure replacement  "rate" ie... the rate of the microwave transmitter.

73. curved landing ski - landing foot - sum of two equally spaced upon each side of the center line of the craft

with the same mechanical operation system.

82. loading ramp electric ratchet wench a "trine"  three cable reel upon each side with the third cable a

89. aft landing foot hydraulic piston union mount - *Note - sum of two equally spaced upon each side of the center

line of the craft with the same mechanical operation system.

the integrity of the pneumatically sealed electric jet engine

"back up" generator listed at https://www.designdeskinc.com/cross-pump-generator.html

for safety. Also detects ship hull compression for controlled slowing of the craft

131. cargo lift with system as an air lock lift

156. pulley (sum of three cable tracks each side of the vessel ).

Letter "B" = tool bay ( octagonal frame for  "flat" floors factoring the centrifugal motion artificial gravity effect ),
with with the taper angle produced then for electrical / plumbing and ventilation) the walls of the rooms
then perpendicular to the floors to have a standard square room appearance

gravity effect ), with with the taper angle produced then for electrical / plumbing and ventilation)

Letter "D" = galley ( octagonal frame for  "flat" floors factoring the centrifugal motion artificial gravity effect ),
with with the taper angle produced then for electrical / plumbing and ventilation) the wall of the rooms
then perpendicular to the floors to have a standard square room appearance

travel with the inertia of mass. Forward hover motor assembly allowing for the two outer most

vector discharge to the bow or  stern https://www.designdeskinc.com/hover-motor.html

Letter "M" = Quarters / with plumbing (lavatory), and electric in each sleeping Quarters self contained

septic (note- the inner gravity theta frame  "wheels" then may also be quarters only. This allows

effect ), with with the taper angle produced then for electrical / plumbing and ventilation) the wall of

to the the hull's frame

Rate of travel to a detected object then also requiring particle gain such a Muons and or Neutrions within the static compressor high speed flight engine system.  ie... "particles permeate compression chambers and when traveling at high velocity the monitoring of said type of particle is critical for system safety".

*Note - The sub atomic "Quark" then being effected at high velocity a critical phenom to observe within the
engine system as time is a factor / "rate of travel ", also energy in the bond ( strong force weak force )

The exterior hull outer shape then encapsulating the system components (omitting number 34 and landing gear components to allow said components function), with the hull contour lines included in the hull's over all appearance ... please note* " in alignment positional chart components are not to scale" ... scale will follow engine capacity performance dynamic and service requirement. The "ship" frame of laminate plastics also able to be grown in the algae bio reactor.... The ramp, number 75, is tandem with the vessel's center line

By the shape of the vessel the system would then be water buoyant,  ie.... "able to float or land in water by the volume of displacement vs. weight of the vessel".

Due to the temperature of outer space the ship's hull integrity is paramount. Thermal cycles ( hot to cold and cold to hot ) fatigue hull composition material. This design will then be a dual outer hull with a cavitation between the two barriers. The outer most surface a tight weave with electrically conductive filament  above a thermal insulator that is also acting as an electrical insulator.

The interior of the insulator then mated to  a net grid weave, "screen with depth" of the screen. The water ice slurry of  synthetic fiber derived from the algae bio reactor, to then be injected to the force chilled cavitation between the hulls. This increases the total hull system hull strength by freezing the outer surface of the inner hull by "heat exchange" using the ambient cold temperature of outer space. The screen and filling the void between the solid inner hull and the screen outer net hull causing a thick hull effect. This enables the craft to then resist high speed micro meteorite.

The thermal barrier is, also an electrical insulator, to then  thermally insulate the temperature extremes encountered in space with the outer surface as a tight weave ( containing conductive filament ). This prevents the ice from melting in high temperature starlight.....

The inner hull then with the capacity to also self seal ( pressurized gel between two inner hull layers). The inner hull then has and outer panel that will be able to be chilled by the forced air exchanger accommodating fittings to fill the cavitation between the hulls with the water ice slurry - contains fittings for...; water drain (wet vac ports) water and steam injectors that will be able to pump the water containing fiber slurry (causing hull ice) and slurry of micro synthetic fiber into the cavitation between the inner hull and the fine screen outer hull.

The increased hull impact strength is incurred in this method and is required due to the speed capacity of the vehicle. The chamber is forced cooled (air cycle) prior to water slurry injection. Using an ice core hull with micro fiber then increases the impact strength of the hull. The outer "plate" upon the inner hull then with plenum channel to cause the cooling keeping the ice frozen using the force cooling system. The said "plate" then with fixed protrusion to lock the ice that is formed within cavitation in place. The protrusion then cold conductive to assist in thermal stability of the ice slurry. The "cold conductive protrusion" then assisting in supporting the outer weave and insulator when cold cycling the cavitation... stabilizes the "height" of the cavitation allowing air flow when force freezing the water ice fiber slurry.

This allows for hull repair with out having to exit the craft. Within the outer hull tight weave of electrically conductive filament synthetic fiber above the thermal and electrical insulation layer before the fiber screen, with the outer weave then containing electrically conductive filament to de-energize the hull electrically. This is required to dissipate the possible induced outer hull electricity being incurred when traveling through empty space at high velocity. The thermal insulator just below the tight weave then is also then acting as an electrical insulator.

The hull then a structural i-beam with retaining locking clasp to then allow for the "block" who's outer surface the the compressed expansion gel dual encasement with the hull contour then upon the outer surface. The hull block" then constructed of skew directional multi ply laminate to shatter force if impales. The composition material then a carbon and synthetic composite containing high strength epoxy cured in enclave.

The individual "hull block" then able to be exchanged if damaged with out losing large amounts of internal atmosphere granted the ice re-freeze process is incurred first and if the hull breech is small..  The "hull block" then clasp to the structural vessel frame. The "frame" i-beam will the have a larger out flat causing the shape of a  "T" when "square shape" by the additional laminate then inserted into the I-beam cavitation.

The laminate composite then also a skew structural laminate composite who's indent cavitation is then with additional flat laminate to cause a square beam structural member able to then be bolted together with rivet compression upon the terminal end of the bolt to compress the nut in place. The "T" beams then of strait construction with the mounting  "hull blocks" of different height and outer contour to then cause the exterior shape hull contour of the vessel. Modular vessel hull construction. The laminate will also provide radiation shielding if "doped" with non hazardous metal particle.

The ship will have an "on board" capacity to manufacture the components for hull repair utilizing the algae bio reactor for feed stock hydrocarbons.

The ship will also contain "on-board" electrolysis systems to then liberate O2 (oxygen) from water to then recover atmospheric O2.

The design then being a high speed flight vessel will require an additional  "hard cap" nose of the craft then initially lifted by the disk and assembled in space prior to high speed flight. The "nose" hard cap then pyramidal in shape and of sufficient strength to then preform it's intended function at operational parameter. The "hard cap" impact shield  will also contain elongation detection sensor to assist in static compressor engine speed regulation.

Upon the corners at length there are then four fold out beam that contain electro-magnetics to then assist in amplification of the vessels E.M. shielding system and compression transmitter   ie... to augment the magnetic bubble launchers effect as a magnetic field plow. The hard cap impact shield then hard lock docked to the craft - allows for umbilical multi wire connections. The apex of the pyramidal impact shield "hard cap" then the leading point and the angle of the pyramidal structure then the angled deflector..

The impact shield will also have the capacity to control electrical inductance (capacitance of electricity to "de-energize" the hull / external surfaces).  The design system may incorporate https://www.designdeskinc.com/levitation-core.html where required for additional lift or force vectoring.