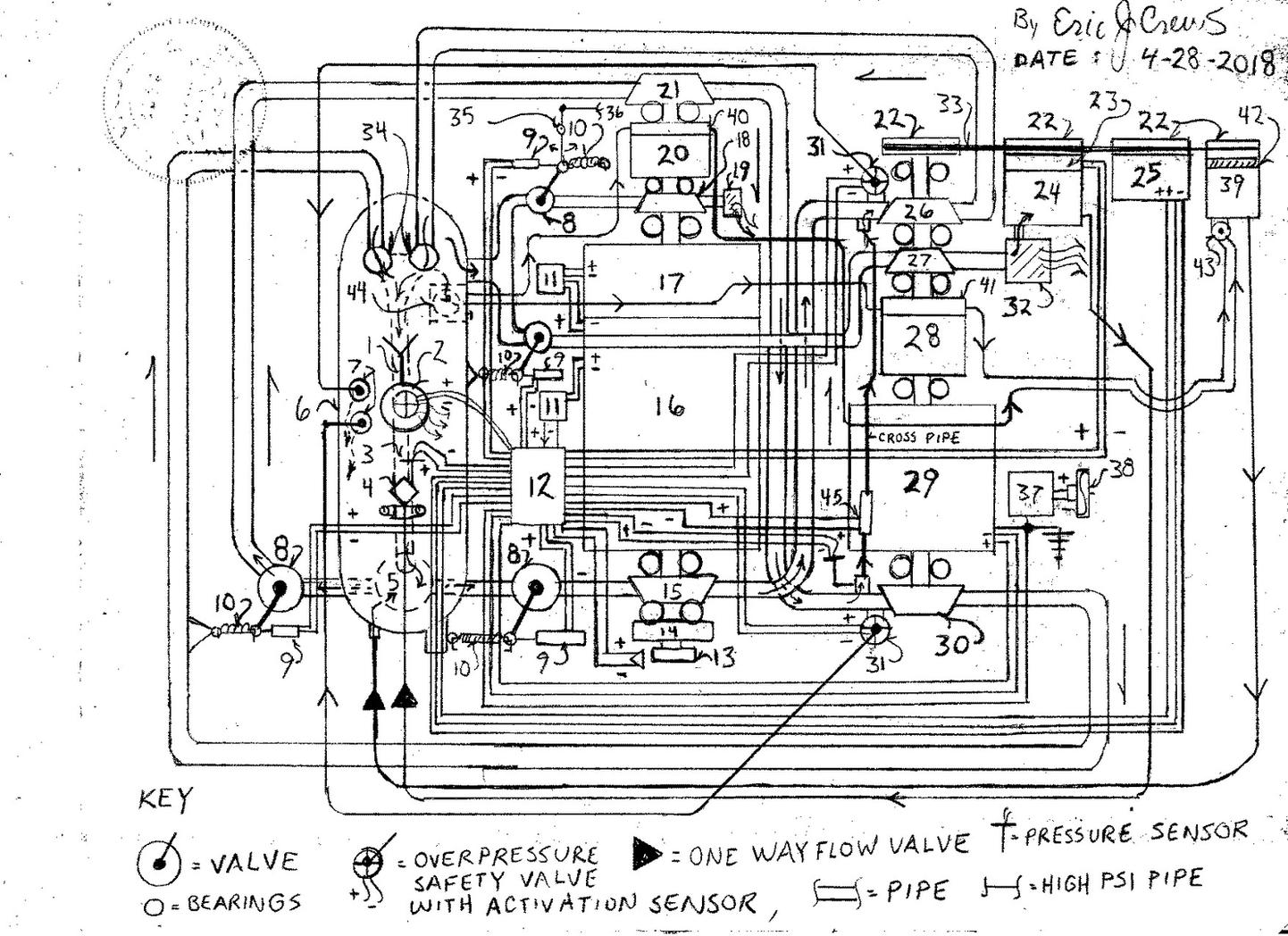 The cross pump generator is a fuel less pressure cycle that  incurs "hydraulic draft" of a pressurized fluid to then yield speed incline of the generator assembly. Some when seeing this might think it impossible yet causing hydraulic fluid to return to the combined component air pressurized pressure tank faster than the silicone oil is discharged is possible due to the physical state of "matter". The surface area of the air pressure  then acts as a piston causing the non electrically conductive non flammable silicone oil to become  "pressurized".

for instrumentation display ( gauge display / on- off circuit switch ).

of the main high voltage generator

28. 1:10 ratio gear set high side of the ratio tandem rotating to the pneumatic impeller number  27 and

34. oil flow return couplings and return injection tubes that will discharge the oil just atop the oil line above

the oil drain, number 5. The extension "tubes then inject into pneumatic pressure toward the "wall

of the pressure tank in to the air pressure just above the maximum oil line. This reduces any oil

toward the silicone oil drain itself.  ie.. oil vents downward as this is a top view schematic.

42. "gear set" a  1:2 ratio gear incline (gear set) so that the oil pump is rotating twice the velocity as

the pulley then being the rotational input to the 1:2 ratio gear set.

ensure the lock is engaged ie... a fault sensor to indicate a problem if the oil shut off valve is in the wrong

position for the oil filter.

logic processor by fixed magnetic interrupt sensor. The pressure of oil is also monitored upon the valve

with a full open flow solenoid causing the valve at full flow by the force of the energized solenoid.

Within this system a percentile of the generated current  initially from pneumatic pressure discharge traversing across the pneumatic impellers, is directed to the system electric drive motor number 29. This causes stable incline of rotation and allows for the system's base pneumatic pressure to counter the resistance gain in the  speed incline. The air pressure within the combined component pressure storage tank is automatically refilled to prepare for the subsequent system re- start.

The pneumatic pressure is only dissipated upon "Start Up" and is caused to be refilled automatically by the pressure sensor upon the combined component pressure storage tank referencing the pressure sensor's information and causing the electric clutch to engage the pulley and drive belts rotation to the air compressor yielding refill pneumatic pressure. The total system R.P.M. rate then governed by the R.P.M. sensor causing control of the reintroduction electricity level from the main high voltage generator to the electric motor and also causing valve restriction to then limit the oil flow rate.

Excess electricity out put then via receptacle mounted upon number 12. The flow tubes / pipes are electrically grounded to the systems electrical ground and electrically insulated atop the flow pipes. The flow pipes encased within a shock casing to prevent injury should component failure occur. The sealed electric motors and generators are also equipped with a blower fan to cool the exterior of the casing through heat transference... the actual inner chamber then sealed with an inert Noble gas ( Argon) to then prevent excess low level Ozone within the environment.

The oil out flow from number  21 then directed, via flow pipe, is then impaling number 30, hydraulic impeller and causing the draft accelerator assembly to advance in rotational rate.   Number 30 is tandem rotating to the armature of the electric motor, connected by drive shaft. The said drive shaft then also  connected to  the input of the 1:10 ratio gear set. The rotational output of the 1:10 ratio gear set then tandem rotating  with the internal "counter tilt" ratio gear set's high side hydraulic impeller"wheel", the pneumatic impeller,  and  the internal "pump wheel" of the hydraulic pump, number 26 who's drive shaft extends and tandem rotates with the drive pulley causing drive belt rotation along with the pulley system.

hydraulic pump, number 21. The total effect is then incline in rate of rotation to produce a "baug" resistant power ban to yield usable output electricity with the systems speed regulated by the systems electronics and valve flow rate.

* Note - An additional oil pump / (hydraulic pump) may be added to the drive belt system to then draft effect hydraulic oil thru internal hydraulic impellers added to the high sides of the gear set's . The additional flow system so that the additional couplings are upon the oil filter housing  ( located under the combined component pressure storage tank.

The flow pipes then connected to the said additional drain / oil filter housing " oil filter mounting block, then directed  to the ratio gear sets number 20 and number 28  ( hydraulic impeller located upon the high side of the ratio gear system "tandem rotating" ). The pressurized oil intake to the  internal hydraulic oil impeller with then flow then to the oil intake of the drive belt drive oil pump, via flow pipes, with the pump's oil discharge then directed via pipes with one way valves discharging into the combined component pressure storage tank.

The oil entering the drive belt driven oil pump then has a selection valve on the intake manifold for the belt driven oil pump to adjust the velocity from either of the ratio gear set's internal hydraulic oil impellers. This "counter tilts" the ratio gear sets and nullifies the resistance produced when using a gear incline for rotation speed incline.

In this system it is important to understand that the magnetic "pressure" produced by electromagnetism ( electric motor number 29), rides atop the fluid velocity rate to then cause a lower Horse Power electric motor to then be able to motivate a larger generator who's excess electricity production can be diverted to external application.

The base pneumatic pressure in the dual component pressure storage tank then great enough to counter act the total mechanical resistance in the generators and the gear sets by pressurizing the oil... typically air pressure automobiles store over 1000 p.s.i. ( pounds per square inch), and this is a bit  of a hazard. The system does not require as great of a storage of air pressure.

The design only then requires a short "sustained run" of air pressure displacement due to the fact the hydraulic and electric motivation system then kick up once the system is in rotation producing electricity. The design is then "load reactive" then being able to increase electrical current to number 29 from number 16 when the electric drive train of an automotive product requires greater electricity levels. The electrical out put of number 16 then

directed, voltage regulated, to the main electric motor connected to an automotive transmission and in proportion number 16 produces electricity increased to number 29 simultaneously so that the system produces more electricity than is required to sustain rotation.

The system is suitable for agricultural equipment, water purification via distillation system, water pumping, electricity production upon a distributed platform, and other transportation applications such as automobiles, freight trucks, mass transit. The system also has application in maritime industry as a motive power source for propulsion in the shipping or boating industry. 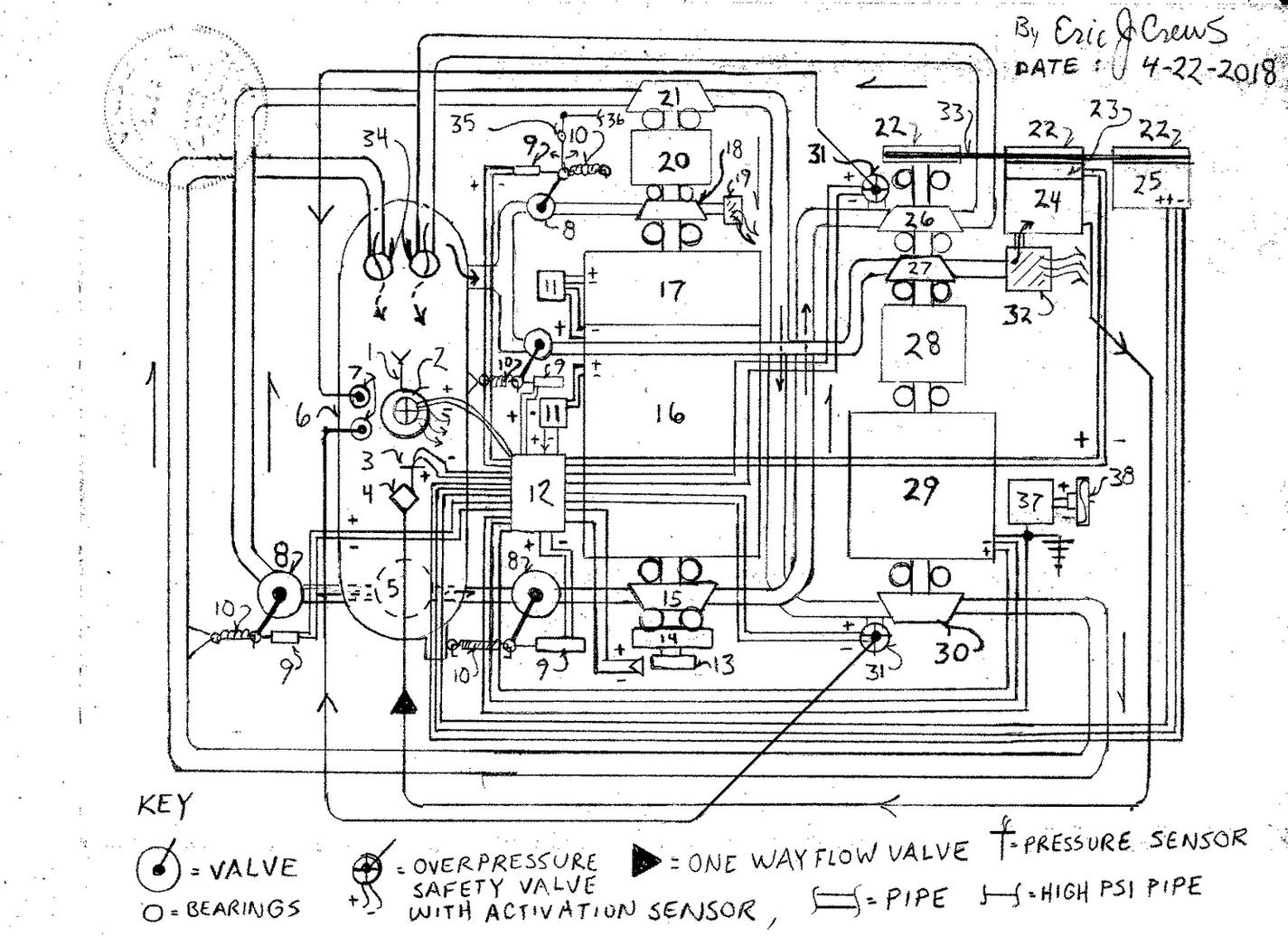 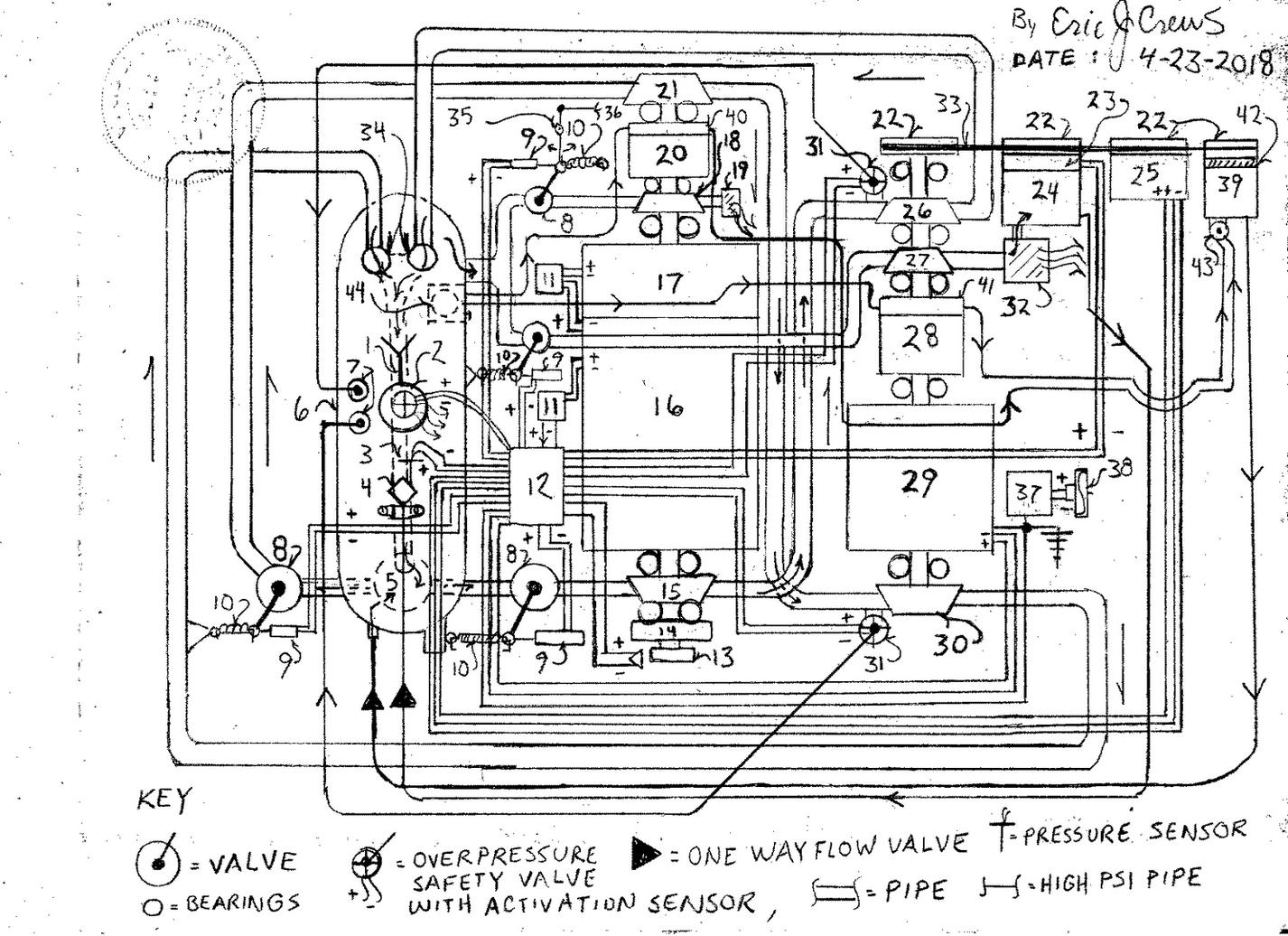 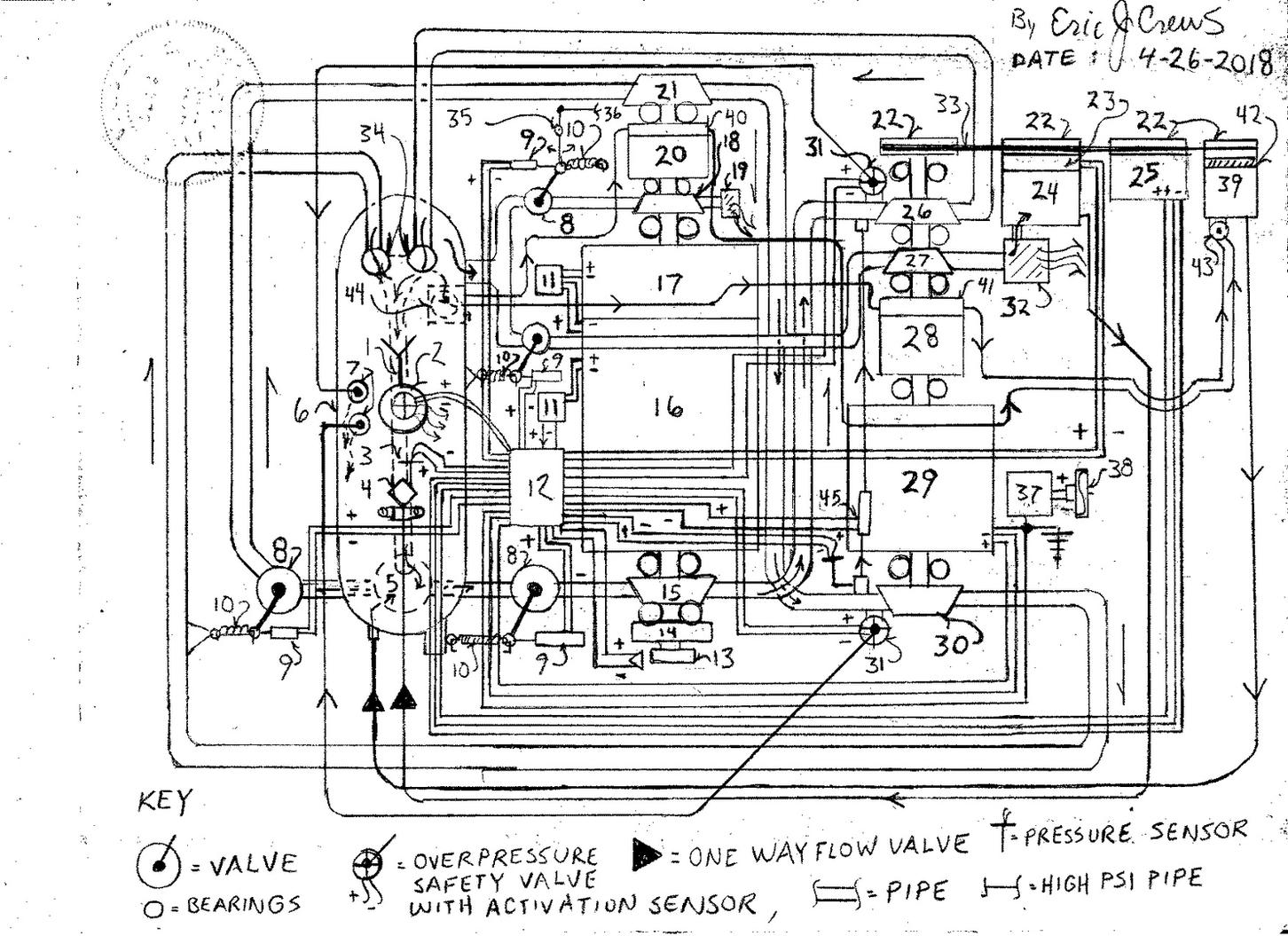