The following aerospace engine design system is then intended to assist in asteroid mitigation as the speed that is attainable to then respond within a timely fashion is then present with this design system.

The system uses particle accelerators upon a  "swing arm" to then cause magnetic field to accelerate the cold plasma then laden with random electron to then be directed by toroid electromagnetic who's magnetic field is then compressed by  microwave radio transmitter causing the electron and inert noble gas to excite in velocity causing an effect of high pressure upon one end of the engine system and low pressure upon "within" the aft of the engine.

The electron absorption system then aiding in the low pressure effect. The low inert gas pressure level allows for high engine speed. The system will also work while retaining vacuum. The design system then electrified by fuel less electricity generator. The system uses a "super cooler" refrigeration system to then also chill the interior of the electrically insulated hull.

The design is a radio (microwave) compression system that also uses the injection of electrons as the discharge rate then can keep pace with the required pressure system "feed rate". The venturi acts like a passive compression system increasing pressure and speed of the cold plasma. The "swing arm" containing particle accelerator cylinders then acts like pumps within the helical coil. The act of perpendicular reintroduction of working mass, then off sets the "static" in the force equation. The power source for the system then listed at https://www.designdeskinc.com/exciter-delta-type.html

The system uses two toroid electromagnetic doughnuts also permanent magnets with the magnetic field then compressed by radio transmitter ( microwave transmitter ) to then peel the field causing a compression bubble that contains loose electrons. The linear particle accelerator then causing directional force to pump the plasma toward the compression venturi. Care must be taken not to cause resonance within the compression sequence as not to weaken the confinement material.

9. hydraulic piston extends the cold plasma return tubes to seal the cold cycle return when the swing arm
is then compressed into the recess

17. compound jet (cold plasma pump ) discharge port ( both into the super coolers evaporator and into

engine system. The helical particle accelerator coils  are also cooled by this cycle to prevent the particle

accelerator wire from over heating.

The pressure produced from the compound electric jet in the swing

arm force pressurized the cold air flow. This aids in cooling of the particle accelerator. This

also augments the low pressure effect in the aft of the engine system.

aligned correctly into the recess. The hinge then able to travel to and from the center line point

swing arm to "lock". The swing arm pivot hinge then has a sliding tower to allow for correct alignment

The swing arm pivot then is moved by ratchet compression screw thread bolts, a manual function that

closes to the pivot hinge to then close correctly (depicted in the "opened" position). This allows for

continuity of the coil helix then able to complete a pressurized flow cycle back to the system intake.

equation by perpendicular flow of plasma

44. super cooler louver slide valve - allows the exchange of temperature at specified interval according to

the size of port / position of the louver

rate or to control decompress the internal flow cycle. unit is connected to engine system electronic

58. permanent magnets  coil wound with wire to cause electromagnets that have one pole of the

electromagnet to then direct the cold plasma electron to then be induced into the inductance  "pick up",

number 100 for redirection into the system.

59. inductance balancer "controls" the stray voltage to "de-energize" electrically any unwanted incurred
electricity in the electron absorption system between the  "sealed" end of the permanent magnets

metalized glaze external surfaces - allows for de-energization of the coating

71. "throttle valve" drive electric motors ( may be assisted by hydraulic fluid pressure with hydraulic
impeller system tandem operating with the armature of the electric motor number 64)

83. cold plasma return ports ( sum of four each side )

91. one way fill valves inert noble gas fills the engine or can by electric exhaust valve store the inert noble

and from" gas storage pressure tanks. The the pumps and pressure storage tanks are electrically

93. open center orifice ( center of the throttle valve is an open orifice - in effort to reduce

electron preventing the inner surface for damaging the interior walls of the tube. The system will

"guide" the electron toward the center of the tube. The thrust then from the swing arm as

and the radio (microwave transmitter system).

critical components if and when it becomes required as a safety feature function!!! This also

controlled from the ships helm. Where required within the system high temperature ceramics are

then used for insulators and mounting arc node points. Ceramics then also used in the electron

*Note - The engine system may be used in

**Note - sub atomic "Quark" then being effected at high velocity a critical phenom to observe within the
engine system as time is a factor / "rate of travel", also energy in the bond ( strong force weak

that permeate mass are a mass gain factor within the engine effecting engine control!!!

space is also a factor to prepare for regarding biomedical ie... the "effects" upon the physical

* Note - The engine design can be operated void of inert Argon ie... internal vacuum with only 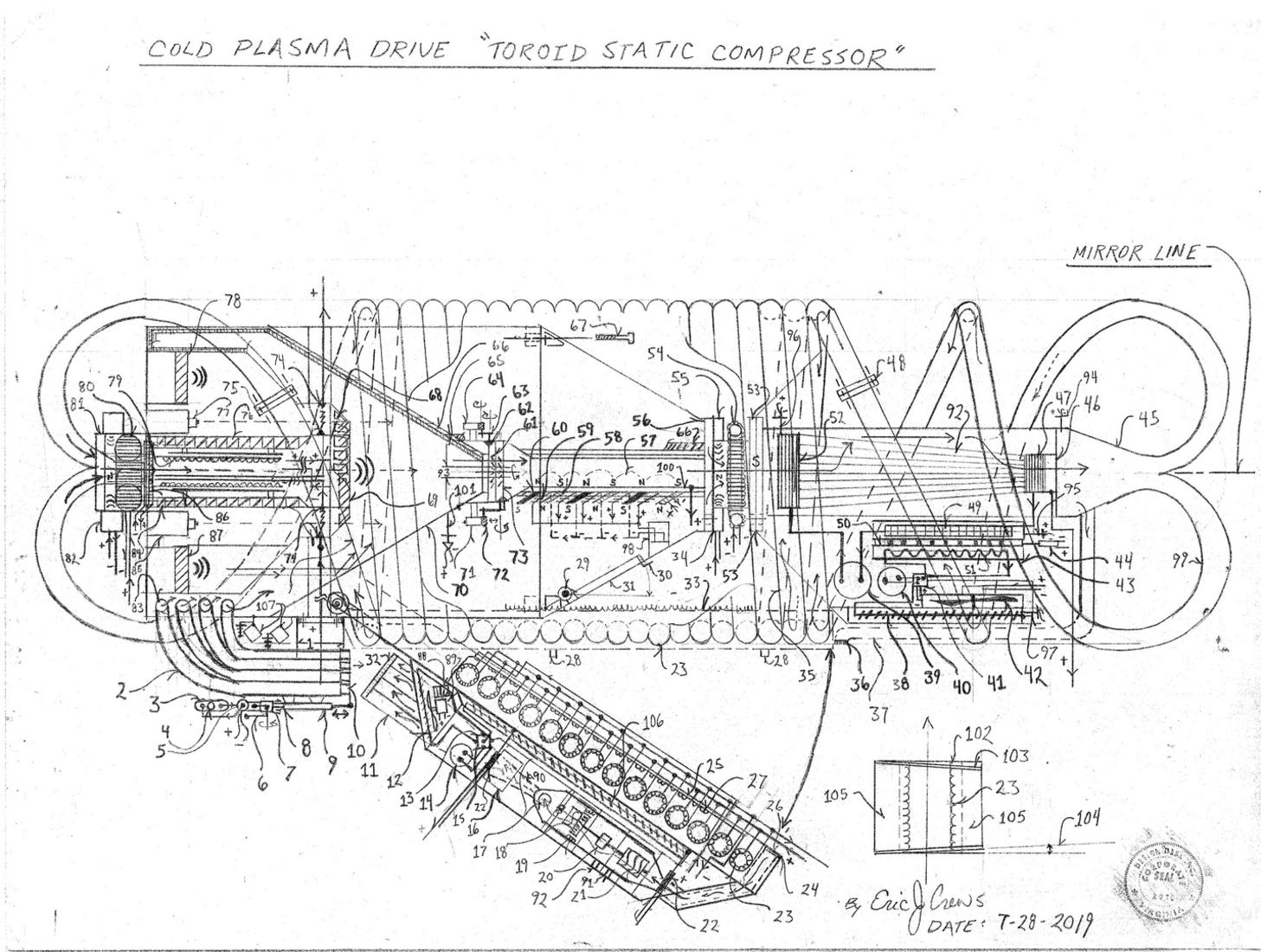