After the information accessed regarding  high energy Gamma Ray burst, Solar Flare and C.M.E. ( Coronal Mass Ejection), we have determined that solar shielding satellites would be a wise investment. The Gamma Ray burst occur from exploding stars and travel at great rate and speed through space. The design will use the C.M.E. itself to direct the flow of the C.M. E. by force vectoring the solar flare through it's system then aligned with number 3 toward the C.M.E. channeling it through the particle accelerator to then discharge the mass at greater rate re-directing the Earth impaling vector.

The System then will act as an electric parasol (umbrella) to shade the entire planet dropping the total solar gain down to compensate for industrial pollution "falling out" ie... compensates for the "solar dimming effect" due to  pollution. Particulate, air pollution, "falling out" of the atmosphere, when converting to clean energy systems, causes solar watt per square meter thermal gain. This satellite design prevents "thermal incline run away effect" due to solar watt per square meter increase. The design will also reduce hurricanes formation. The design is scalable to allowing for multiple craft within a stipulated financial budget.

A transmitter produces an electromagnetic wave that can  "carry" a particle...  electrons have mass... mass cast a shadow..  a transmitter is an electromagnetic wave producing emitter so by causing a tuned  amplitude and frequency interference pattern transmitter "wave" carrying electrons may be able to "de-fract / reflect" sunlight by the satellite's transmitter cone. The system then casting a shadow as large as the earth like a giant umbrella. The design should be able to effectively reduce the solar gain ( watt per square meter) allowing the planets ice caps to self repair....

The actual Gamma ray burst wave is difficult if not impossible to counteract as the incoming vector direction  then would require a predetermination and communications to activate protections systems at faster than light speed communication and we are not there yet... so the best thing to do, as a start, is to then deal with the reactivity there after then shielding the planet from the Sun itself as Gamma rays burst waves destroy the upper atmosphere and cause the destruction of the Ozone layer then yielding to much radiation permeating to the earth's surface. The plant life will be effected post Gamma Ray burst wave. Inclined solar radiation would kill most / all plant life in in a matter of weeks and animal life would follow shortly there after. We can address this in a very careful fashion. It requires attention !!!

The design system then will have the required lift capacity to break Earth's gravity on a fuel less engine system platform.

Electrical power production systems then redundant as well... as are the atmospheric recycling systems within the habitat unit. Design systems listed upon  http://www.designdeskinc.com/portfolio.html .

The system allows for gravity spin to cause similar conditions to the ground for elongated habitations with minimal medical atrophy.  The habitation also contains a grow room for food production.

The design system may also buy time regarding Global Warming as a direct result of Carbon Dioxide then by reducing the total radiation gain...

*Note - global dimming ! (produced from atmospheric particulate) is then reduced when switching off of fossil fuels.... the incline / effect (warming) , is greater than the world has prepared for... avoid a run away effect with this system applied!

The perma frost locks methane... and increased warming causes a greater atmospheric methane level and rate incline. This yields a rise in ocean temperature. The thermo-haline oceanic currents might alter flow then  may warm at greater depth in zones containing methane hydrate (methane ice) and cause inclined release of the methane gas into the atmosphere. The increased addition of temperature and "carbon"

( CO2 - carbon dioxide, and CH4- methane), then effects the acidity level in the oceans, oceanic

Anoxia (oceanic anoxic) would cause the life structure to fail.. it must be avoided.

Within the short time frame where CH4 ( Methane Hydrate) could be released the equatorial stratospheric O3 ( ozone) radiation shielding will then caused the upper atmosphere to gain altitude due to heating and with the feedback  "loop" might cause gas gloss also factoring light "lens effect" ( the curvature changes with temperature and atmospheric shape also effected by the rotation of the Earth.  The curvature of the earth ( factoring albedo effect) effects the feedback loop in thermal gain. The incline in heating the stratosphere causing gas loss of O3 to outer space will effect the radiation shielding. This must be avoided!!!!

**Additionally,  artificial cooling of the Tundra may be required to lock the Methane! By using the following cooling system it may be attained cost effective http://www.designdeskinc.com/storm-protection-balloon.html

Redundancy within the implementation is suggested should component failure occur...

ie... the minimal Sum of 4 "Diffuser " devices. If intending to mitigate gamma ray burst total earth coverage would then be spherical coverage with multitude of craft active 24/7/365.25 days per year incident cone transmission directed not inadvertently effect the asteroid belt.

In the design depicted above  there are multiple functionalities. The design can be used for asteroid / comet impact mitigation with the use of multiple craft then using a carbon graphite weave netting ( like a spider's web)  with the devices around the circumference.

In addition the design system correctly insulated for radiation exposure  ( within number 28 ) is then able to lens solar radiation post result of a Gamma Ray burst ( think particle  billiards balls , cone vectored toward the sun)

The electrical inductance cages then surround critical electronics and act as a shield to control electrical charge inductance (conversion of electromagnetism to electricity) to shield the insulated wiring connected to critical systems control circuits.

*Note -  The emitter "head" (number 35) also exist in the vector ports  about 360 degree polar array venting thru number 37 with a four "bank" system, ie... each of four systems the use 90 degrees about the circumference of the design system. The vector discharge "incident cone" then to be balanced and focused by the lens magnetics ,  focusing electromagnets), number 20. The intake assembly , number 36, is also then in the same fashion... arrayed at the intake in line with 37, multiple times about 360 degrees. There also exist an re-route system for the  particle accelerator' intake should  a single particle accelerator fail. The re-route then allows the intake flow system post compression venturi , number 36 to be fed to adjacent particle accelerators to keep the incident cone continuity intact..

The flight craft is also designed to mitigate C.M.E. (Coronal Mass Ejection...) by then matching the pressure of exhaust.... exceeding the C.M.E.  "pressure" and aligning the "wave guide" number 22 toward

the C.M.E. ,  to then produce a "deflection cone" (think pressure plus increased velocity of emission of the incident cone).

Number 36 then being used as an intake for the particle accelerator for particle density... increased magnetism will occur when this is occurring.... inductance producing electricity will require dissipation systems to safely manage the electrical gain from traversing magnetic fields.  The C.M.E. then used to force deflect itself by directing the force of the solar pressure discharge away from an impaling trajectory with the Earth by correct alignment of the flight system.

It is critical to understand the alignment positions of the design  ...they differ with function.

The "flight ring" does allow for detachable balls (sum of two) for escape  from the ring itself...

Growing algae to produce lubricants in space as well as then being able to "print" tools is an advancement upon a space craft. Algae also then, could grow atmosphere and shield stasis or sleeping chambers with cycling live culture blooms within the hull structure of the chamber then allowing an interior air environment with climate control...

In modern society the electronics we use daily are also able to be effected by E.M.P.

(electromagnetic pulse ) that are tandem with C.M.E.'s (coronal mass ejections). With the above design applied, it may prevent massive fires occurring upon the ground due to the ubiquitous nature of the current electrical power grid, house hold wiring, appliances and automotive products... Granted this would be a rare occurrence but the cost of failing to develop the prevention system would be much greater...

The "Carrington Event" that occurred in 1859 level of C.M.E. / E.M. pulse would be very dangerous today as the electricity grid requires transformers for the domestic current reduction then from the "grid" into the homes...and their damage would take long periods to then restore the transformers should they be damaged by a solar storm..

All of the other engine designs currently in use today (to my knowledge) will not  respond in such a given time frame  ( ie... from solar flare detection to placing the mitigation technology in place ) is a bit difficult so we are introducing a "Static Compressor" engine system. Please find it at the following link. http://www.designdeskinc.com/static-compressor.html

The engine system should provide the rate of travel for the required response time parameter. Don't forget to shield correctly in growth weep of algae as a shield when high rate of travel  refer to

Additionally the design may incorporate the following lift system to assist in flight https://www.designdeskinc.com/levitation-core.html or be used to remote detach to deal with detected N.E.O or Earth impacting asteroids or comets. The detaching system to deal with earth impacting asteroids then also implementing small versions of https://www.designdeskinc.com/cold-plasma-drive-toroid-static-compressor.html

the internal workings safe during advent. The inductance capacitors then use arc across

Note - the antenna, labeled communications only is placed adjacent to the intake accelerator with

Note - the solar "pressure" equivalent must remain constant upon the surface of the Earth,

system to then balance the solar radiation diffusion satellite's implementation. The hover

equidistant (circumference),  to then attain the solar pressure equivalent down force as measured

without the solar radiation diffusion satellite in operation. This "to then" balance the Earths orbit.

The hover motors listed at https://www.designdeskinc.com/hover-motor.html  and response speed

Note - due to the "thermal stress" upon the surface of the diffuser "ie... the C.M.E.  impalement side

of the satellite, the surface must be heated prior to C.M.E. re-direction diffusement function

structural integrity of the material selection."

magnetism) contained in the satellite..... hull Gauss will occur...

Note - prior to the C.M.E. actual physical impalement with the satellite, the particle accelerators

then at speed closed cycling a stored inert gas upon the craft. The step is required to then

flare, C.M.E. and solar radiation diffuser satellite collision and redirection. The flare is

then "pulled" from the impalement side and ejected in a cone to redirect the C.M.E.'s

trajectory diffusing it via the incident cone effectively changing the Earth impaling vector.

Note - particle accelerators then the sum of 8,  about the circumference, with redundant operating

a full independent system in reserve.

Note - When attempting the C.M.E. redirection the operators "depart" the craft in flight balls to

operate the system at range remotely. Redundant navigation of the main craft "pre-set" to return

trajectory problems should it become required by redirecting C.M.E.'s Asteroid "collision" within

causing a problem (spherical analysis) about the solar "disk".

This would then require minimum of three (triangular placement), craft, to function correctly

with all C.M.E. satellite discharge vectoring away from the asteroid belt or singular

declination "to not" effect objects at range).

the emission "cone" emits about 360 degrees. 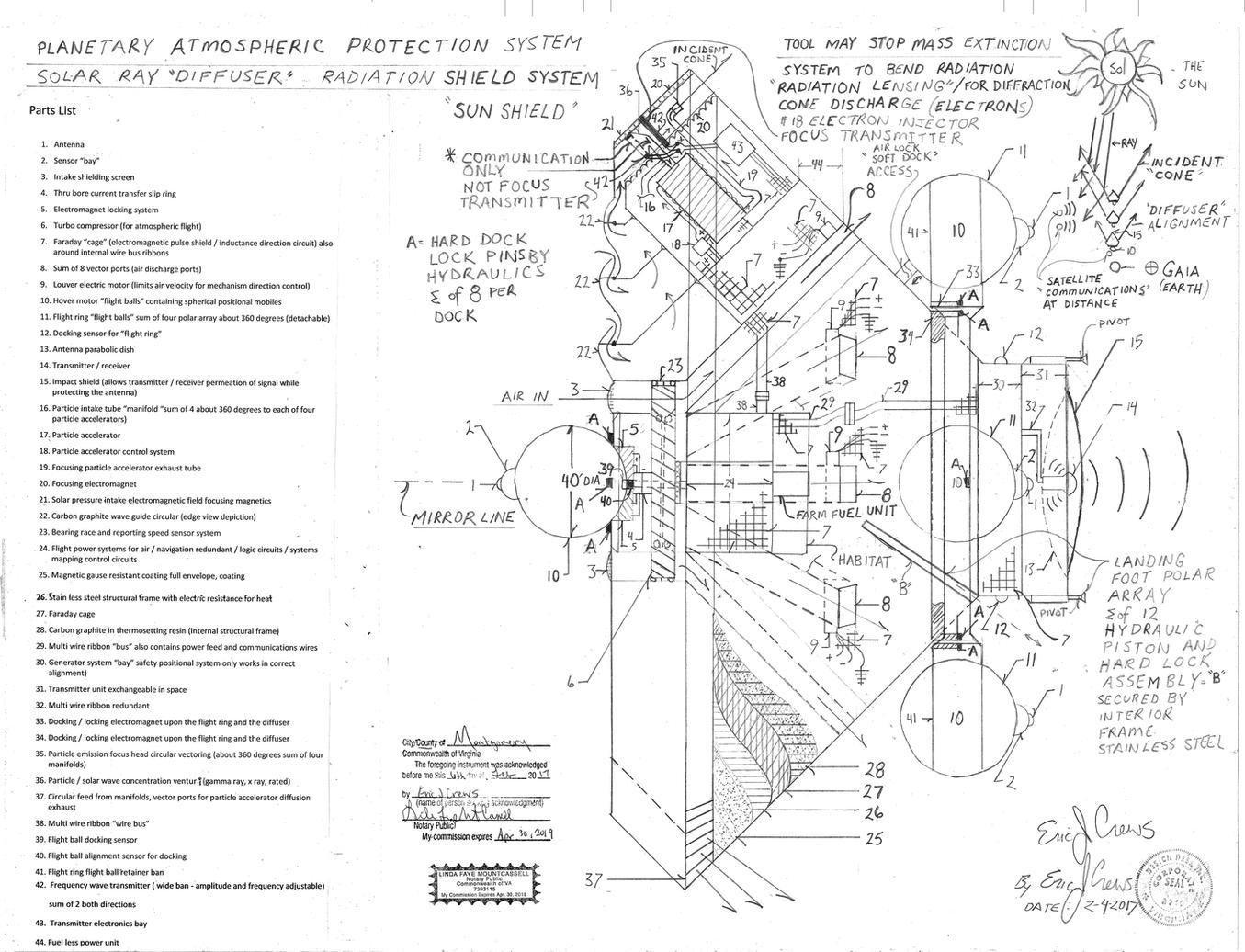