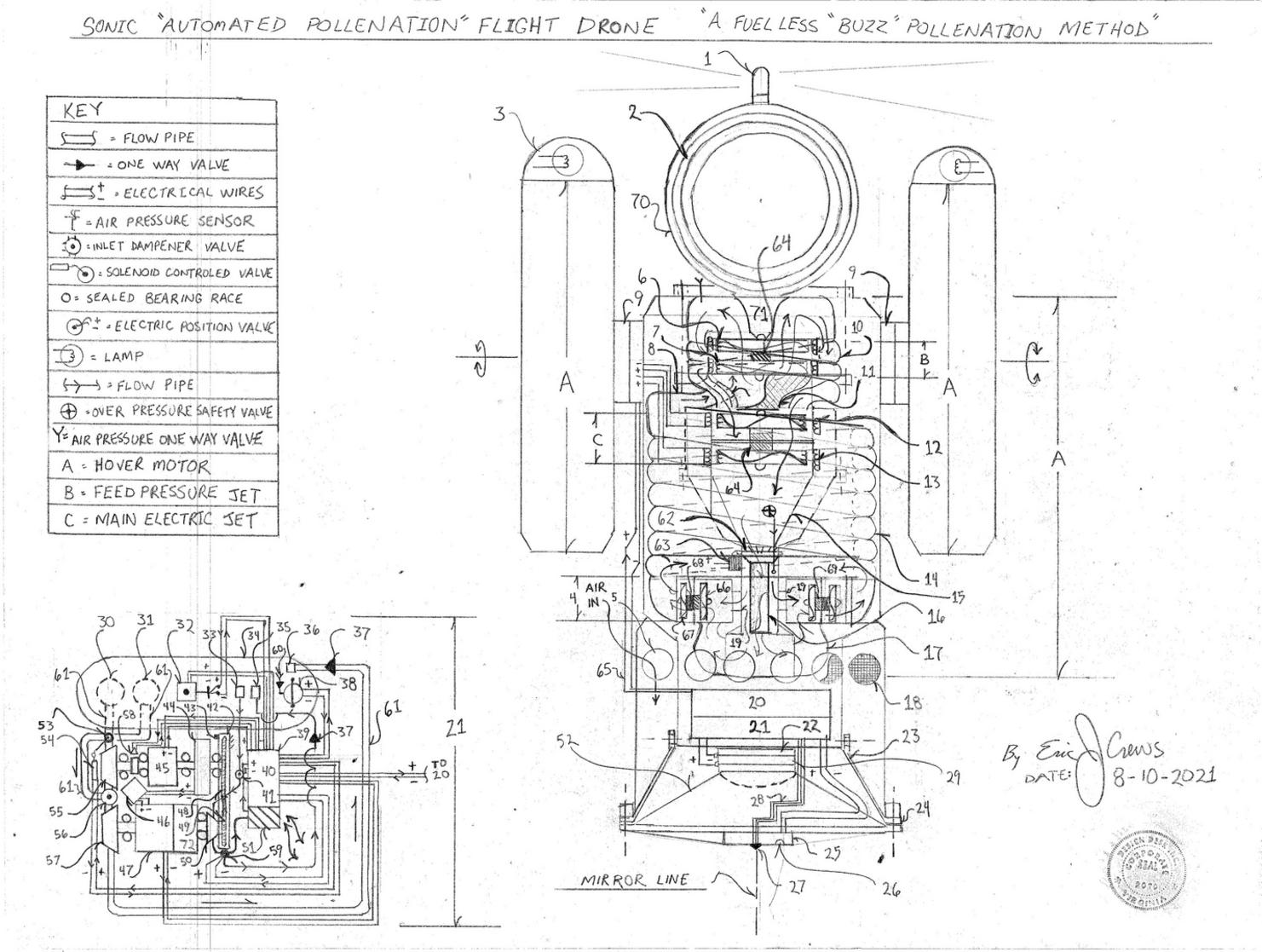 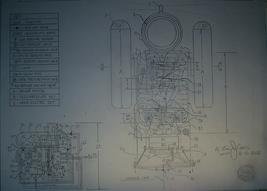 The following "sealed force vectoring" flight system operates upon a fuel less platform using low frequency audio pulse to pollinate crops in the field 24 / 7. Empty space contains electrical charge.... a magnetization / gauss effect then occurs in metals contained within asteroids.... this alters their orbital trajectory.... orbital trajectories then within the mapping catalogs must be updated.... to compensate the gradual magnetic increase and when solar flares or interstellar super nova burst waves occur as they can carry magnetic "bubbles"....then inducing magnetism within asteroids... Planetary magnetic field of solar system planets also a magnetic factor in the assessment.

The design operates within an rf ( radio frequency) "fence", to then stay in the boundaries of the crop in the field. When applied in environments, attempting the reversal of desertification... this design has a high performance capacity compared to insect pollination.

The flora then requires a little assistance regarding pollination... This design, then in tandem with unlimited fresh water availability, can reverse the failed pollination situation where as introducing insect life to pollinate might not work well due to environmental conditions then being to stressful for the insect life. The system may accommodate a seed planting aperture (seeder), base docking, to then replant a forest or CO2 (Carbon Dioxide) sequestering scrub grass. When replanting forest, a center point rf (radio frequency), beacon would control the range of the craft... establishing the tree planting boundary.

motor about the circumference of the air flow impeller

25. infra red camera and visual camera information unit - allows the detection "location" of the flowers to

30. oil drain (base of the dual component pressure tank)

31. oil drain (base of the dual component pressure tank)

32. pneumatic over pressure safety valve (vents to the exterior) and pneumatic pressure

52. audio speaker external exposed surface then of material atop the actual speaker to then retain air borne

pollen.  A looped fiber mesh will then retain the pollen also by slight magnetic tilt in the material

by the high speed hydraulic pump , number 57 rotating faster than the impeller caused by the system ratio

gear set, number 72, and the drive chain and sprocket system within the oil lubrication encasement

to increase the total speed of the generator producing higher levels of available output electricity. ie.... "a

to the pollinator tip (air pressure discharge tip) upon number 27.

60. pneumatic one way "fill valve" cause the air pressure within the dual component pressure storage tank,

number 34, to then be "set" at the the system's "operating pneumatic pressure level"

64. electric jet ratio gear set system (contains r.p.m. sensors that report to the avionics) aligned so that the high

side of the 1:10 ratio is then causing higher air flow compressor speed

65. ribbon wire multi wire / communications wire - communicates with the lift jet and positional servo to the

control the flight of the unit

69. electric jet ratio gear set system (contains r.p.m. sensors that report to the avionics) aligned so that the high
side of the 1:10 ratio is then causing higher air flow compressor speed

70. counter weight balance ring to allow for "balanced" tilt when the unit is directing the audio speaker toward

the flower to be pollinated

The above design system is intended to then be able to operate in environments where natural or manual pollination becomes to involved. The design is a high speed device then being able to "re-introduce" produced electricity back into the system electric motors both for the electric lift jets that cause closed cycle propulsion (sealed force vectoring) and to the generator's electric drive motors to produce ample excess electrical current for lighting / avionics / audio pulse systems / radio frequency systems - navigation and flight position systems.

The design's generator system is a "pressurized hydraulic draft accelerator" using an electrical re-introduction circuit to "throttle" the power generator into high velocity rotation yielding excess electrical current to then be applied to the craft's sealed lift engine systems. Hydraulic fluid does not stretch in the confinement of a rigid flow pipe so when the hydraulic pump is "pulling" fluid across a preceding hydraulic drive impeller the pressurized oil then returns to confinement under pneumatic pressure faster than the discharge of hydraulic fluid (electrically non conductive and non flammable hydraulic oil). The air flow compressors also then generating electricity about their circumference generator also able to be re-introduced into the electric jets electric drive electric motors.

The generator system, number 21, then speed regulated by R.P.M. sensor and by max speed limiter hydraulic draft by-pass valve number 56. The "operating pneumatic pressure in the dual component (hydraulic fluid and air pressure) pressure tank, number 34, then of sufficient air pressure to then counter act upon / nullify the electromagnetic resistance of the generators traversing magnetic fields, the mechanical resistance encountered within the ratio gear set and the drive chain and sprocket system. Air pressure in the said pressure storage tank causes oil pressure acting then like a large compression "piston" as the exposed surface area of the oil is exposed to the air pressure.

Number 21, then used for outer space functioning, is then mounted upon a centrifuge to maintain fluid location,

(circumference), for system "Start" the centrifuge then driven by electric motor and electrified by battery. For outer space functioning, number 21, is then also double encased with the outer encasement acting as a gas capture cycle to then allow the dual component pressure storage tank to discharge into encased lower pressure also able then to allow the generator system to pull gas pressure from the outer encasement re-pressurizing the dual component pressure storage tank used in number 21.

The system's audio speaker then also acting as a pollen collector upon it's exposed surface so that when the low tone audio pulse is instigated a cloud of pollen is then ejected in front of the air displacement nozzle, number 27 then directing the pollen to the flower..... The infrared and visual cameras assist in avionics flight positional systems and detection of the flower to then cause the designs function sequencing...  ie... the drone finds the flower tilts the speaker (audio pulse), and initiates air discharge to then pollinate the flower.. sequence repeats upon the next flower detected.....

Since the design can operate 24/7 the amount of plants pollinated in a given time frame is then at higher rate. With the current bee colony collapse disorder occurring stabilization of pollination for fruits and vegetables is critical.  A safety system for food pollination assist in solving global hunger.

https://www.designdeskinc.com/cold-plasma-drive-toroid-static-compressor.html to then serve as

would then be in addition to the sealed force vectoring electric hyper jets letter "A". The asteroid capture

net then locked to the craft hull upon the "open hoop" (open bore of the lamp ring).  The "hoop" then used

to lock a heated net of large diameter to mitigate inbound  asteroids remotely.

equal distant degrees ..... Triangular nets then would be tethered at the apex of the net. The net may

large asteroids..... Always approach / "capture" asteroids by netting them from behind. This allows

This system reduces the total cost of mitigation and allows the travel speed /response time, of the mitigation

drive. Lifting large nets will implement multiple craft about the circumference of the heated net. The

to "recess" into the ring housing when then craft is in mitigation function.

mid air collision when multiple units are applied over one field

active reduction of Nitrogen (air distillation), used as a fire suppressant directly from the surrounding

air using a small cost effective unit to then distill air for "active" fire suppressant harvest upon the unit.

* note - this system may be useful in litter clean up if equipped with low pressure hydraulic grappling....

being incurred to the clean up crews if contamination (radiation) or pathogen is then in the refuse.

similar manor to the solar radiation diffuser satellite listed at

https://www.designdeskinc.com/solar-radiation-diffuser-satellite.html. The speaker system then the

location of the diffuser's incident cone transmitter and electron injection system. This may be a smaller

clean energy systems.  An "electric umbrella" transmitting electrons upon a carrier wave in the shape

of a cone, toward the Sun, to shield the total planet from a singular object... multiple craft then in

redundant function may be required.

* note - the craft may be use for agricultural irrigation as an alternative to expensive center pivot irrigation.. either

that would otherwise be to difficult to irrigate. The hose then clamped thru the "open ring" to dispense

water along the length of connected units operating in tandem. The design also then could be used for

then may be required. The refrigeration condenser placed within the open ports at number 18, as

number 20 and number 21. The cooling "effect" then able to transfer to the system venturi via the

internal  frame structural members that are thermally insulated. This aids in keeping the