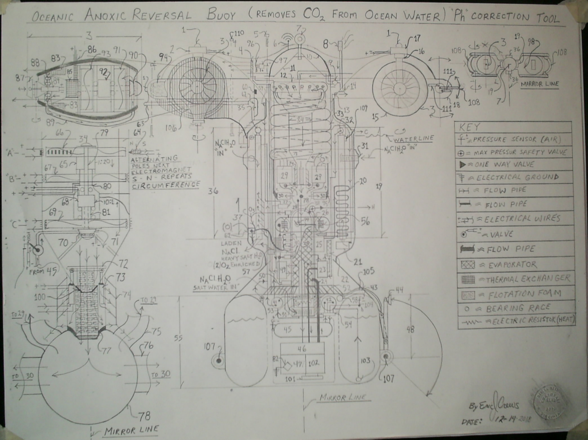 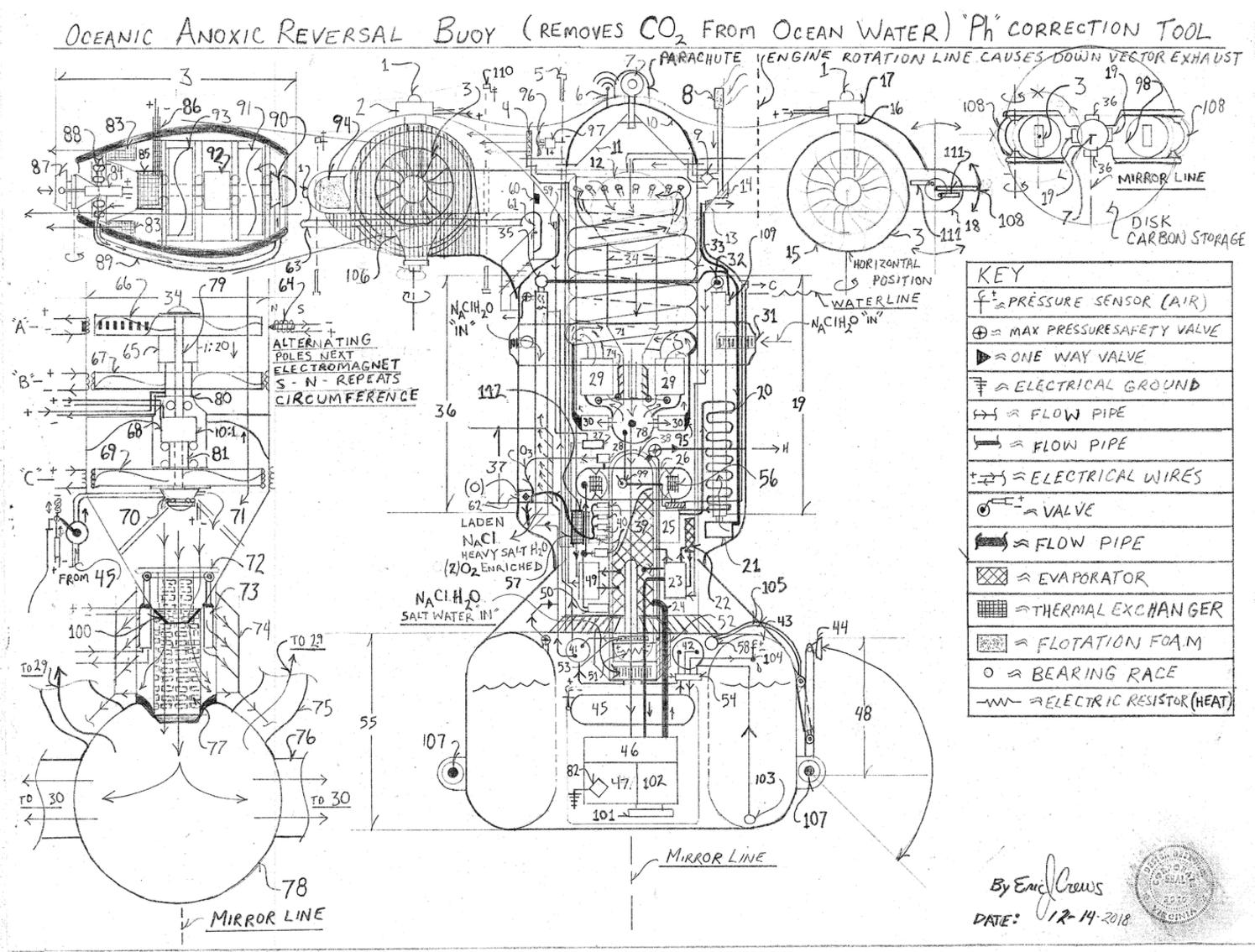 The "Oceanic Anoxic Reversal Buoy" is a design system to then, "cost effectively", remove the Carbon Dioxide from ocean water. The design then also ( if equipped ) filters deep water fisheries and, at depth, oxygenates the water. Granted the shear size of the problem is in deed massive for a system like this to correct as the number of units would be great to obtain the required objective.. within the Anoxic Reversal Buoy system is also a method for the design to pay for itself then to cause more of the design systems.

The area of the ocean vs. the volume / capacity of the mechanism also then a factor to consider .... so the buoy would then be placed in the most effected regions and in locations that ocean gryes effected by high concentrations of carbon dioxide saturation and placed to use the ocean's natural circulation to assist in the volume of water area able to be processed with lower numbers of units.

The self sustained Ph correction buoy then adjust the acidity level powered by a fuel less generator system.  The buoy then implements distillation and liquefaction to then obtain carbon dioxide mitigation via an electrostatic ionizer to then produce (2) O2

The conversion of carbon dioxide (CO2) to O2 then also causes the reversal of dead zones by having the capacity to enrich the ocean water with oxygen.

The buoy is also a flight system containing wave height adjustable level via ballast tanks. The system can be made to be submersible.

8. air inlet air filter ( allows also for CO2 [carbon dioxide] extraction from the atmosphere when the top of

the buoy is above the ocean surface)

the liquefaction process for gas stratification)

22. cooling exchanger - evaporator then knocks the vapor's temperature down

27. air pump ( draws temperature from the H.T.F. chamber  number 112 within the heat exchanger )

Monoxide if it occurs in the flow system post ionizer.The ash then channeled to the magnetized aguer

33. flight system off set "cancels" the "force static" in the electric jet's air flow by coiled air return within a tube

40. gas analyzers and electric valves to then determine and adjust total gas flow to then allow the gas

stratification to then enter the correct system function ie... isolates the CO2 vents the hydrogen and sends

in atmospheric cycle mode. When this is occurring only the CO2 will enter the ionizer.

43. toroid ballast tank ( causes the system to submerge self rectify and or surface also adjust the system height

in the water due to ocean conditions ( wave swell height )

48. about the circumference upon the exterior of the final outer hull then are 12 hydraulic piston stabilizers to

the refrigerant flow and refrigeration compressors driven by electric motors

52.  Hydrogen burner ( also able to warm the base of the liquefaction tank )

53.  water drain "contains" dampener valve and one way valve only actuates under  a specific level

may be assisted to open the dampener valve plate by electric solenoid and or hydraulic piston assembly.

to then use the carbon. Additional Allotrope processing under the dome in number 11's structural frame. The

analyzers), to assist in correct Ph re entry water that then mixes with the salt laden * salt heavy ) water

65. 1:20 ratio gear set sealed lubrication contains thru shaft drive shaft where as the out put rotation of

causes 20 times the rate of input causing letter "B" to then produce pneumatic "draft incline rate of rotation".

of velocity to letter " A" contains R.P.M. sensor

79. out put shaft driven by number 68 motivated by letter "C"

87. aft port close flap causes air pressure in the aft of the engine forcing the discharge through the grid

rotating with the transonic impeller , number 93 and the armature of the electric motor , number 85

99. carbon particles collect upon a magnetic auger screw and are blown out of the vessel via this valve

in the heater to also be able to direct vent  if required venting N2, H  or other gas to aid in the system

preforming it's function correctly. The unit vents at number 13 to then also be correct remix air safe

110. lock nut with rivet tab  tab contains bore hole to lock the nut with a rivet

* Note - The above design system may also assist in "lost at sea" rescues if the stranded person then signals a satellite to then cause the buoy to travel to their location.  A quick First Responder rescue system.

The above design system is then a multi function tool to restore the Earth's oceans. The design system will distill ocean water upon a mobile flight system also then with fuel less propulsion ( air water or space). The design system then a factory producing diamond to then pay for the tool in increase numbers increasing the ubiquitous implementation to correct climate change due to carbon dioxide saturation having caused oceanic Anoxic.

Ocean Anoxic causes incline levels of CO2 and CH4 discharge from a dead ocean possibly effecting Ozone sluff off. This increases the Oceans capacity to absorb CO2 if then being cleaned to "sink" the atmospheric CO2... the design cleans the CO2 "absorption zone" to then safety  and stabilize the ocean's ph ( acidity level ).

The Ocean Buoy then cycles salt water saturated with carbon dioxide ( CO2 ) / Methane ( CH4) and from within the system injects hot air under pressure  ( with the Nitrogen removed ) to cause water steam also containing other gases. The steam is further heated to then become water vapor and trace gases . The trace gases ( also referred to as  "compound vapor" ) thermal barrier not to be exceeded so that any explosion hazard is avoided.

The stratified gas is directed to the design processing functions. The carbon dioxide then directed to the ionizer to be converted to Ozone and carbon particle. The ozone gas then directed to mix chamber to form (2) O2 then injected into the heavy salt laden water at the base of the primary desalination system, number 36.  The other gases within the liquefaction system then directed to their direction... the system forms clean water able to be pumped away from the buoy to then aid in disaster relief where fresh water has become a problem due to natural disaster.

The flight system within the buoy is powered by fuel less generators then redundant ie... more than one system. The heating ventilation and air handling system also is equipped with atmospheric monitoring system to control occupied space for carbon dioxide or other gas saturation to then control for correct atmosphere for the occupants.

yielding more electrical out put from the generator

number 68 and output shaft then at ten times the rotation to letter "A" . The rotation rate of number 65 then

the "zero point " - launch point of the magnetic pressure of the electric motor number 80. The system

then inclined reaction in velocity rate.

The design concept then counter acts the force static in air flow by coil perpendicular return of the air flow then obtaining pressure upon the top of the system contained within the pressure sphere, number 12 and constant vacuum in the lower sphere in number 78.

Number 48 then may also mount additional tool functions for wild fire fire fighting equipment implementing the air stratifier's ( listed at https://www.designdeskinc.com/air-stratifier.html ) Nitrogen production to then displace the O2 in wild fire advents. Within the system the injection of hot air then will produce N2 ( Nitrogen at first ) though, from number 27 to number 28 can then cycle "air" ( ozone / oxygen ) into the heat exchange system to then bubble into the salt water hot  O2 and or O3 reducing the N2 within the liquefaction tank. Since the system is also able to cycle "open air" the gas analyzers that are toward the top of the liquefaction tank will also contain an "atmospheric mixer" to then vent the correct remix to the "open air atmosphere" in correct

proportion ( N2 and O2 ), minus the carbon dioxide.

* Note - When processing atmospheric CO2 the flow cycle is a bit different... The system then takes in air from the filtered air inlet , number 8 then with valve , number 9 positioned to vent to the pressure sphere , number 12.. at the  "base" of the lift engine the vacuum sphere, number 78 has pipe then connecting number 78 to the liquefaction system to feed the air compression system in number 46 air stratification mix. The Nitrogen will not be directed to the bubbler within the desalination system  as that would cause an increased Ph problem.

When doing this the Nitrogen obtained will also cycle thru the ionizer to then be channeled through the magnetic auger and flow up the pipe to the discharge port where the gas is able to be vented to open air post O2 remix system so that correct proportion is then in the vicinity of the advanced Oceanic Anoxic Reversal Buoy. ( lower case letter "c" then is for the "carbon particle discharge port with the chamber then able to vent within the hull also so that the Nitrogen is mixed with in the hull with O2. From lower case letter "c" then a screened carbon granule / particle vent directs to https://www.designdeskinc.com/diamond-machine.html ( contains vacuum feed system ).


* Note - The Allotropes of carbon ( diamond ) then pays for additional total systems if sold for gems, tool

upon the steam cavity to then increase the heat upon the top in the inner surface of the  "steam chamber".

auto eject  fitting (used if and when an "at sea rescue" is required) . The buoy may also out pump