The SnowVac system then is powered by an "on board" fuel less generator.

Every year many people have problems regarding the removal of snow from their drive ways or upon side walks.

Municipalities also expend large financial resource regarding the removal of snow from the road way. This design is able to scale and be used in it's large form to then clear the road way in a cost effective manor.

The "sweep brush" then with side walk rubber scraper to then channel the melt water to the concentrated water uptake produced by the high capacity vacuum.

The generator design system then  listed at https://www.designdeskinc.com/cross-pump-generator.html


The design system then with multiple forward /aft lamp system. The interior of the vacuum  "bay" then also containing illumination lamps to service component if malfunction occurs while the system is in the field  "in-use".


The design then also with a stairs attachment port to then be able to remove the snow/ ice from stairs then also being able , via the system attachment tool to then dry the stair steps with forced hot air then produced in the main unit..

The system is placed upon a shoveled space upon the sidewalk filled with  "start water" filled in the primary tank and the operator starts the generator system contained within the design causing the system to heat the water. The forward hot water spray flap  ( also using forced hot air), then is positioned in the upright position ( forward tilt position), so that when the water reaches it's operating temperature and secured with the insert lock pin into the hinge end alignment bores the system is ready to be used.The spray flap is then  adjusted according to the depth of the snow fall.

The radio control remote then actuates the system 's "on-board" / "on-demand" electric water heater and begins to cause the system to pump the water contained in the main water tank. The flow cycle containing a heat sink to then retain the temperature prior to the entering the insulated main water tank. The main water tank is then thermally insulated. The filtered water recovered from the vacuum, is filtered / screened, to then be pre- heated by the flow tubing in the heat sink and is recycled into the spray system to then exit the  "spray flap" melting the water in continual cycle. The heat sink is like a thermal battery storing the heat in in a dense material with "heat transference fluid" ( H.T.F. fluid) then constantly cycling to reduce the system weight while keeping the "heat sink" at controlled temperature.

While this is ocuring the hot air  / forced hot air cycle is then also assisting the heat sink" to then stay hot and is directed through the system vents upon the forward flap and to the sides of the vehicle to assist in keeping the water flowing. In the road way model the hot air blower will also assist in keeping the roads drain clear preventing re freeze from residual ice formation blocking the streets drain.

The forward hing then with the pressurized hot water spray jets is also designed to produce a  terminal end water flow like a water fall / water curtain then also being hot water. The water curtain then begins the melt process and the hot water spray heads break up the melting snow with high volume high pressure hot water. The spray jets cause rapid mixing of the water curtain hot water to then be vacuumed up into the system. The forward flap containing the dual hot water flow then is with side flaps to assist in channeling the snow melt into the vehicles vacuum system.

During this process the use of the system at temperature will produce steam cloud obstructing the view of the operator... so for the road way model  high velocity air pumping will be required upon the cab of the vehicle to control / direct the hot water cloud so the the vehicles drive has a clear view of the road.the collected steam may then be recycled into the system to lessen the energy input to the heat sink keeping the air flow or water hot...

As with any advancement the cost expenditure must be justified in a business model to then in reasonable fashion, justify the cost of the  "up-grade" where as this mechanism then also able to be used as an agricultural watering system with the inverted cross member "U" shape chassis tie then being able to lift via hydraulic piston system for watering the crop land. The design  then also able to be equipped with a hydraulic boom upon the back of the system wit swivel pulley to then also be used as a guide for an electric wench with tow hook . The wench will pivot upon the aft / rear bumper to then be able to pull stranded vehicles that have been stuck in the snow. 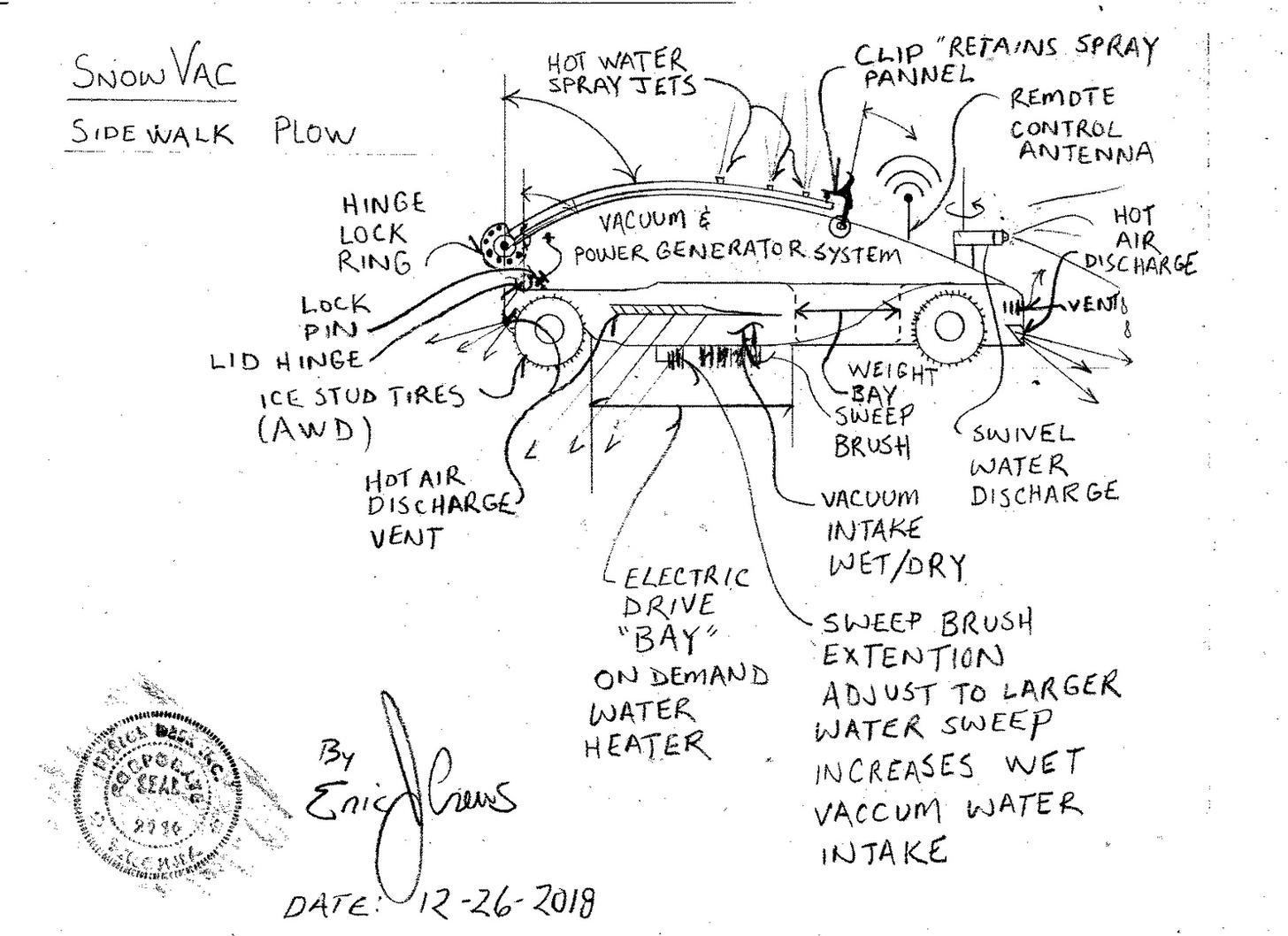