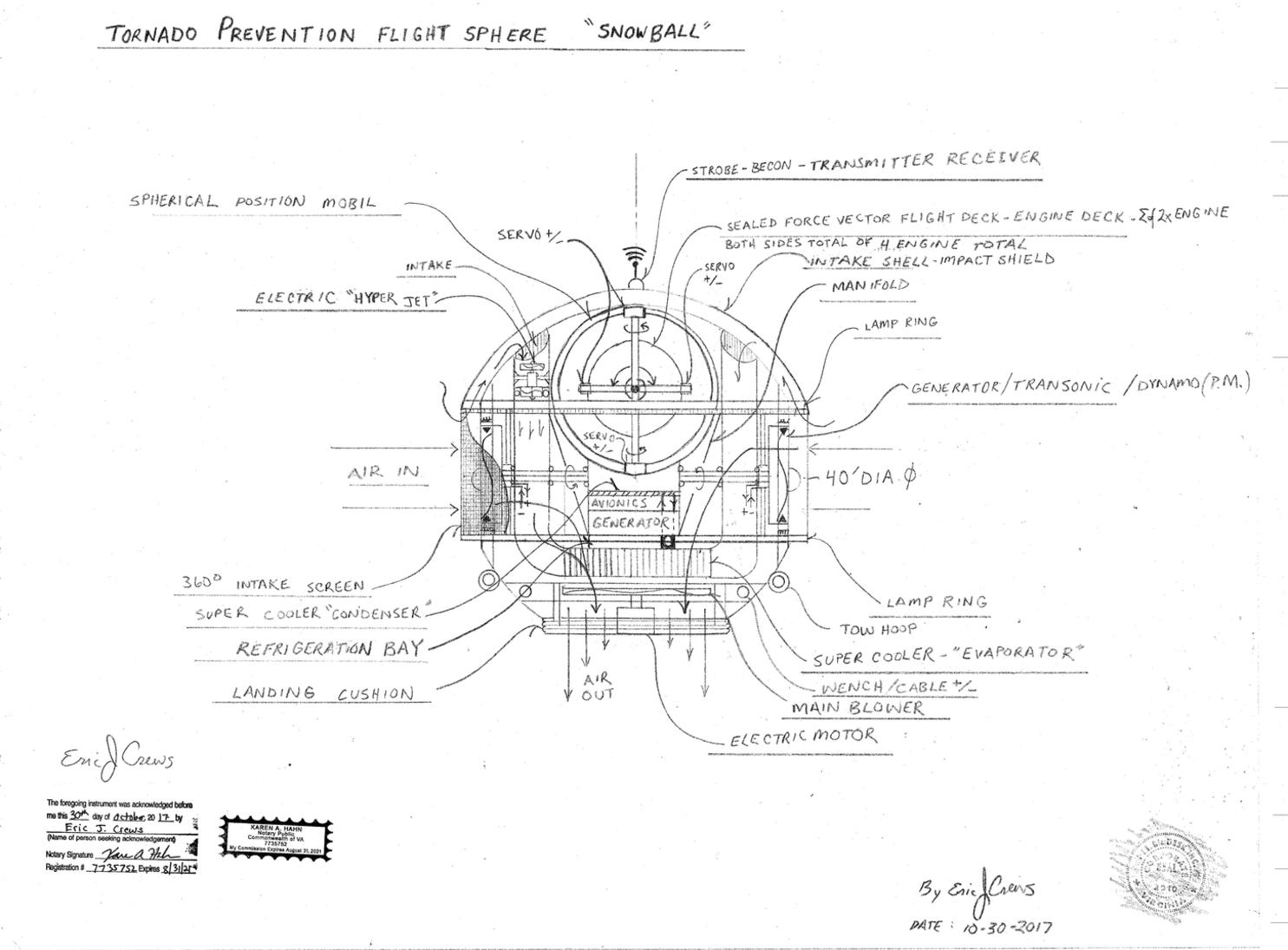 Currently so many high velocity tornado causing damage structures and endanger many rural and urban environments.... the solve is to mitigate the weather phenom.

The following design system is intended to interrupt the thermal updraft of the air flowing into the tornado thus interrupting  the convection and causing the cyclone to stop.

The system may also work for typhoon and hurricane as the flight system does not require fuel to operate allowing long time frame operation while performing it's function of discharging cold air at high volume over the ocean.

The engine system is then a sealed mechanical balloon force vectoring via compound electric engine system to then discharge post venturi to negative / lower pressure created by higher velocity electric jets (sum of two) to the off set the "static"  effect of the cycle ( air flow), via perpendicular return unto the top of the main electric jet engine. The engine design then upon the flight deck four times.  Spherical flight mobile depicted at http://www.designdeskinc.com/baton.html

The power source for the system is then a draft cycle using pressurized hydraulic fluid with a "counter tilt"  both hydraulic and electric upon both sides of a ratio gear set to then produce high density high voltage. "Counter tilt" then defined to counter act upon the resistance produced when using a ratio gear set.depicted at http://www.designdeskinc.com/hydraulic-draft-cycle.html

Additional functions for the design system may include search and rescue over ocean expanse or mountainous terrain.

The air cycle hyper jet is the also counter tilted in the same fashion as the sealed force vectoring main engine assembly.  The hyper jet then is a dual transonic propeller / compressor system with a ratio gear set then between the two air compressor the high end ratio of a 1:50 ratio gear set then the leading intake compressor / propeller to then cause increased velocity via it's air displacement unto the secondary compressor then acting as a pneumatic impeller increasing the intake compressor's speed in a continual fashion when the ratio gear set's resistance is nullified by the electric counter tilt method ( hydraulic cycle optional on the hyper jet).

The generator "bay" then with "active" air distillation system listed at ( https://www.designdeskinc.com/air-stratifier.html) to extract Nitrogen and with  compressor / pump system inject liquid nitrogen via injection system into the air flow discharge allowing the air to decrease it discharge temperature. The injector discharge tips for the liquid Nitrogen are then placed just after the main blower so that the temperature drop is exterior to the mechanism. Atomized spray discharge so that fine droplet evaporates quickly and drops the discharge air flow temperature.

The Nitrogen injection system has a safety lock combination authorization valve  to prevent un-intentional actuation or discharge! The super cooler then chills the intake air post compound micro jet before the main blower. This allows for the cooling systems redundancy should component fail in a single system impeding function. Two independent systems for air cooling.

the exhaust temperature to effective level.