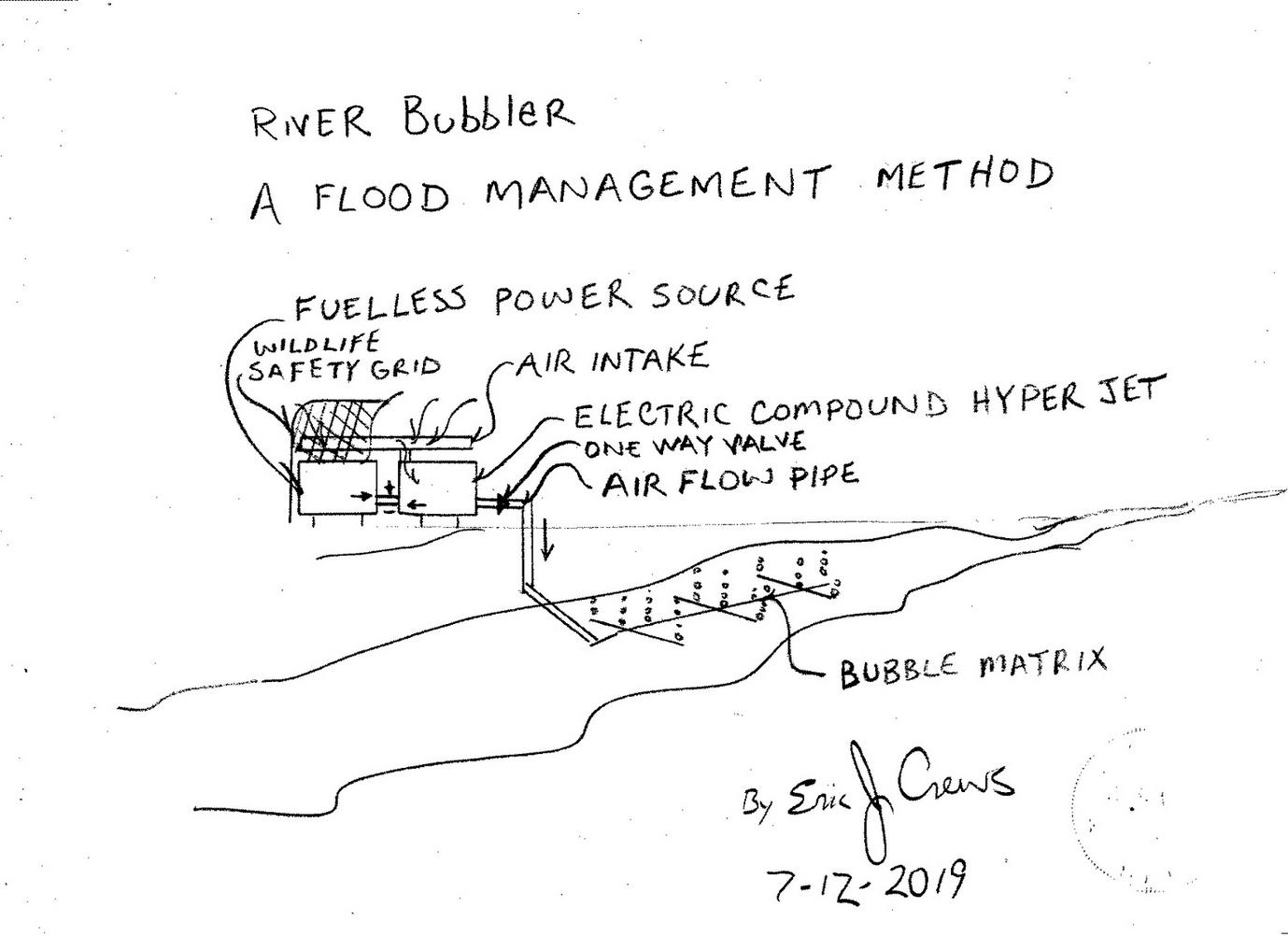 The following design system is then applied to a river and river tributaries prior to high storm to then displace the water within the river basin with air bubbles. If this is incurred prior to high storm it will prevent flooding. The air injection intensity then tapered off, reduction of volume,  during high water advent allowing the lower river level to accommodate the increased water added by rainfall.

The volume of active air injection to exceed the estimated volume of rainfall proportionally "distributed" over the temporal curve.. This allows the additional flood potential to then stay within the rivers natural river banks.

O2 (oxygen),  enriched water, then discharges into the bay. Increased algae may form within the water but can be dealt with by active algae harvest for oil to assist in paying for the systems installed...

The CO2 carbon dioxide then in the constant run oxygenation cycle can be stripped out or greatly reduced to not cause Anoxic (acidic) water... then keeping the Ph level correct for the river. The CO2 stripper then in the air filter encasement. The excess electricity can be directed to street lighting to also reduce the cost of installation.

The surface velocity of any air intake inlet then not to become a suction hazard for person or animal in the environment (safety fault sensors to check the chambers are free of person or animal). The tower type air intake the of sufficient height to not effect person on the ground. The tower top rain cover then mounts the lightning suppression system , air craft beacon lamp, and radio receiver / transmitter atop the rain cover.

The wildlife safety grid then totally encapsulating the system and contains a warning light and transmitter / receiver unit contained in the system's "logic processing",  (mapping / control electronics), to then indicate fault with the unit when the pulsing light from the safety beacon actuates. The design can be small to reduce the cost of implementation then secured upon concrete footer with anchor bolts. The transmitter will report system fault warning and unit specific number and location. The receiver will allow remote actuation.

The logic processor then able to as a mode of function assist in system actuation via sonic bouncer or other type of water level the also able to transmit signal to the command system requesting actuation by operator. The operator's display will system check for faults before system actuation.

The bubble matrix then of grown algae plastic with weight mass of food grade stainless steel to prevent the system from rusting. The bubble matrix then weighted to "sink" to the river floor. The connection hose from the river edge then to the pressurized air exhaust of the electric compound electric jet (blower air compressor) will then be a pressure rated air hose constructed of resilient material to then remain intact through many thermal cycles and be UvA light  UvB light  and UvC light resilient. With the bubble matrix of grown algae plastic it greatly reduces the cost of installation.

The air pressure hose to bubble matrix coupling may then connect additional air hose to, at a distance, connect  the additional air hose to distant bubble matrix. The hose from the electric jet assembly may need to be covered with motion detection tamper resistant alarm and weather shielding guard. The air bubble matrix if  grown by algae bio reactor for plastic tube production upon flotation barge in the river it can at low up keep cost then continually install air bubble matrix until sufficient density of  "bubbler" is in place. For a more immediate installation land based industrial plastic pipe extruders and algae bio reactors for the hydrocarbon feed stock will be used.

By the design of this system the production of swells at intervals may in fact assist in river water flow velocity causing the water to speed up to it's delta or discharge point. This is a feature of the applied system.