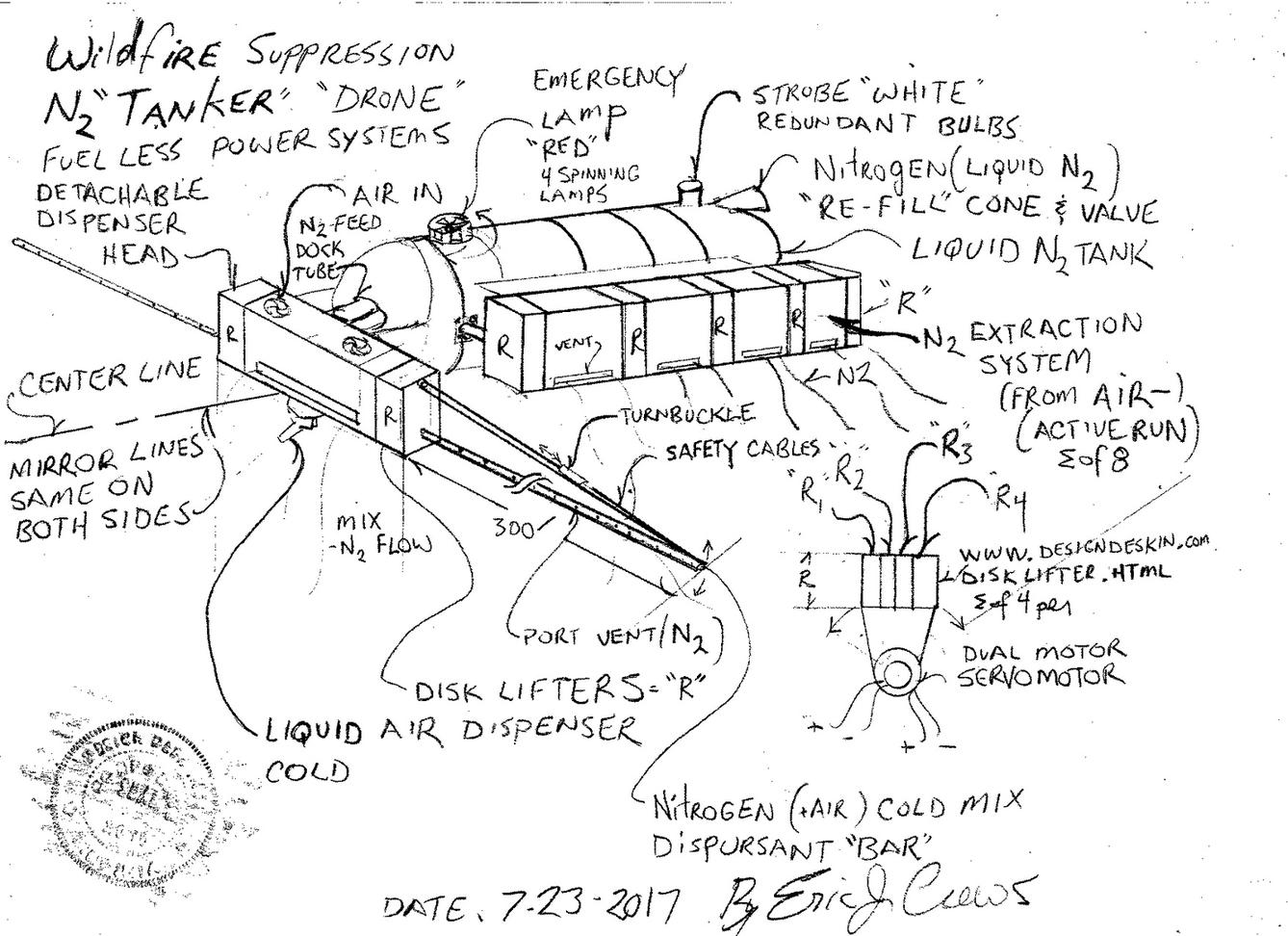 The "Forest Fire Suppression System" is a remote control device that chills the out laying area and freezes wild fires to then put the fire out. The design system has the ability to cause the direct deposit of cold liquid "air" then being with Nitrogen ( N2) post extraction from the air ( omitting the oxygen)  in the direct environment. The on board distillation / stratification system ( nitrogen and argon extraction from the air), then powered by fuel less hydraulic draft accelerator type of generator systems will extract the inert Noble gas Argon (Ar) along with  ( N2). "On board" Nitrogen harvesting by https://www.designdeskinc.com/air-stratifier.html

The heavy saturation of the liquid  Nitrogen will also assist in putting the fire out by the displacement of Oxygen. The design is symmetrical ( the same upon both sides), with redundancy then to compensate for component failure. The liquid Nitrogen may also be fed to the unit at safe distance, ( via hose) to allow for constant feed of liquid N2, to then control the situation at rapid rate with minimal danger to the fire fighter.

The design is a self powered flight system then able to be operated by radio frequency.  The electric disk lifters depicted upon http://www.designdeskinc.com/disk-lifter.html will not out force or down force of air to then fly. The lift pressure is then cycled perpendicular off setting the "static return"  to then recycle within the lifting jet. The ends of the dispenser unit then with 4 disk lifters all lifting upward upon a center motorized pivot. For systems that require greater horizontal flight additional disk lifter engine systems then within the design to then cause two forward vectoring and two retro vectoring systems.

Currently helicopters drop small amounts of water or fire retardant unto high energy wildfires.. it's not enough and is dangerous for the pilots!  The down draft from the helicopter's lift blades accelerates the fire...this is then feeding more oxygen causing a blast furnace effect then nullifying to some extent, the intent of suppressing the fire...  Air craft dropping fire retardant is also a very dangerous function as the fires occur in harsh terrain and the conditions for flight make it extremely hazardous.

The "tanker unit" then will resemble a pressure rated insulated double hull container like a gas station underground gasoline storage tank with multiple disk lifter systems to then yield stable flight horizontal and vertical. The engine systems functions redundant as well as all control circuits.

Additionally the cost associated with wild fire suppression is sometimes very large .. cost of retardant, insurance, fuel for the flight system ... This design is safer keeps the job within a reasonable budget and is an advancement in speed of dealing with the out of control condition when it's required!

The power (electrical generation system) then byhttp://www.designdeskinc.com/hydraulic-draft-cycle.html  . The position of the liquid N2 spray head then is also able to be rotated by electric servo motors. The "air dispenser" then also with infrared sensor system to then allow the design to locate ember hot spots that may remain after the initial dowsing of Nitrogen. The remote hand held control will display by video the "hot spots" then detected by the "air dispenser's" infrared sensor.


It is observed to be a superior system than using water to suppress wildfires... when steam is caused increased O2 may occur then feeding the fire....also as steam is caused when using water for wildfire suppression the updraft mass ( steam) then causes flow adhesion pulling more air into the fire... so as a cost effective alternative Nitrogen is then the superior choice for forest fire suppression.  As long as the gas ( N2) is obtained, via fuel less electric driven systems, the cost is then in range for very large situations....

The system will use Argon for the refrigeration systems to then also allow for on board automatic refilling of the ambient air extracted refrigerant.

Nitrogen, then lighter than the displaced oxygen that is then feeding the flame will put the fire out. The Nitrogen, due to it's lower temperature will sink.... for a short time. The liquid Nitrogen slows it's rise by the cold air discharge then venting from the unit to then deprive the flame of O2 with higher N2 content  while being able to freeze the combustible material to slow its burning..

The liquid nitrogen will also be able to be injected into the exhaust manifold to then have a controlled mix rate with the exhaust providing a wide swath of coverage.  Add on Nitrogen dispersal tubes with exhaust ports along its length may also will then be able to  connect into the manifold system then containing direct injectors of nitrogen to then cover great ranges with a single unit.

The re-combination  rate of the gas  ( N2) is a critical factor then also considering the topographical terrain.... Nitrogen is lighter than oxygen yet using this type of system the surrounding areas must be taken into consideration as not to saturate low land with massive amounts of stratified Nitrogen.   For instance if using this system near a town... precaution must be taken considering live stock or people as not to inadvertently effect them with excessive levels of Nitrogen when using this system. Weather conditions are also a factor ( temperature / humidity)...

The system may also work to then allow for safe egress from high rise  fires  with a harness system to safely lower trapped people and or pets away from skyscraper fires. An emergency oxygen mask system may also be contained within the final design. The smaller systems may also be used for search and rescue efforts since they do not required fueling ( heated garment systems for hypothermia will be included).

Emergency vehicles such as Ambulances or police have to travel at high rate of speed when responding to situations... the rate of travel endangers the public to some extent so this lift system upon Responder's vehicles  may allow for a quicker response time  by elevating the response method, by flying emergency vehicles  with less impedance due to traffic or pedestrians and safer flight systems as the current methods do not have redundant lift system for flight...

In the above forest fire suppression "tanker" design... the material selection for hull construction is critical due to the extreme environments that the design is intended to operate within.  Powered stain less steel embedded in ceramic heat resistant tiles will panel the design system's exterior surfaces.

The dual hull pressure vessel then containing the liquid Nitrogen ( N2) will then also have a cavitation between the hulls with cooling coils to keep the internal high pressure tank within it's operating parameters.

This avoids  the stresses upon the inner tanker produced by exterior thermal  ranges a vessel like this will be exposed to in it's service. Refrigerate the inner tanker / N2 pressure vessel. The valve systems also will require thermal heat socks that then operate by electric resistance with redundant circuit paths should component failure occur.

The liquid air dispenser ( N2) is then used like a path plow... then allowing the vessel to travel in its plow wake  then dispensing thru the N2 bars a wide swath of chilled "mixed air". The Nitrogen content ( total percentile) within the air mix then depends upon the fires intensity terrain and  type of material on fire....

The systems components operate at thermal extremes ( hot and cold ) so to compensate for thermal fatigue, causing possible unwanted failure in critical situations, the design system requires correct material selection for the operating parameters of the components.

With the unmanned flight system in place a dual unit connected by an air intake  ( air transfer ) hose the craft may be useful in volcano suppression as the liquid Nitrogen and ultra cold temperature could freeze the volcano causing the eruption to stop / or slow....  The explosive nature of volcano dampened by dome capping.... with decompression discharge tubes venting under water into holding ponds... 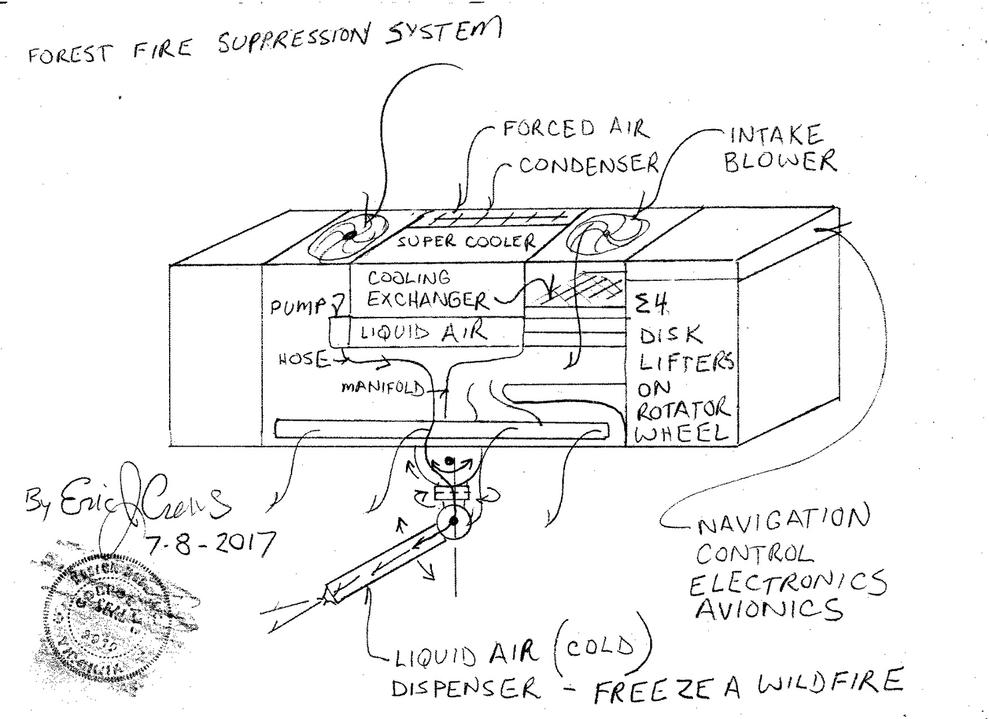