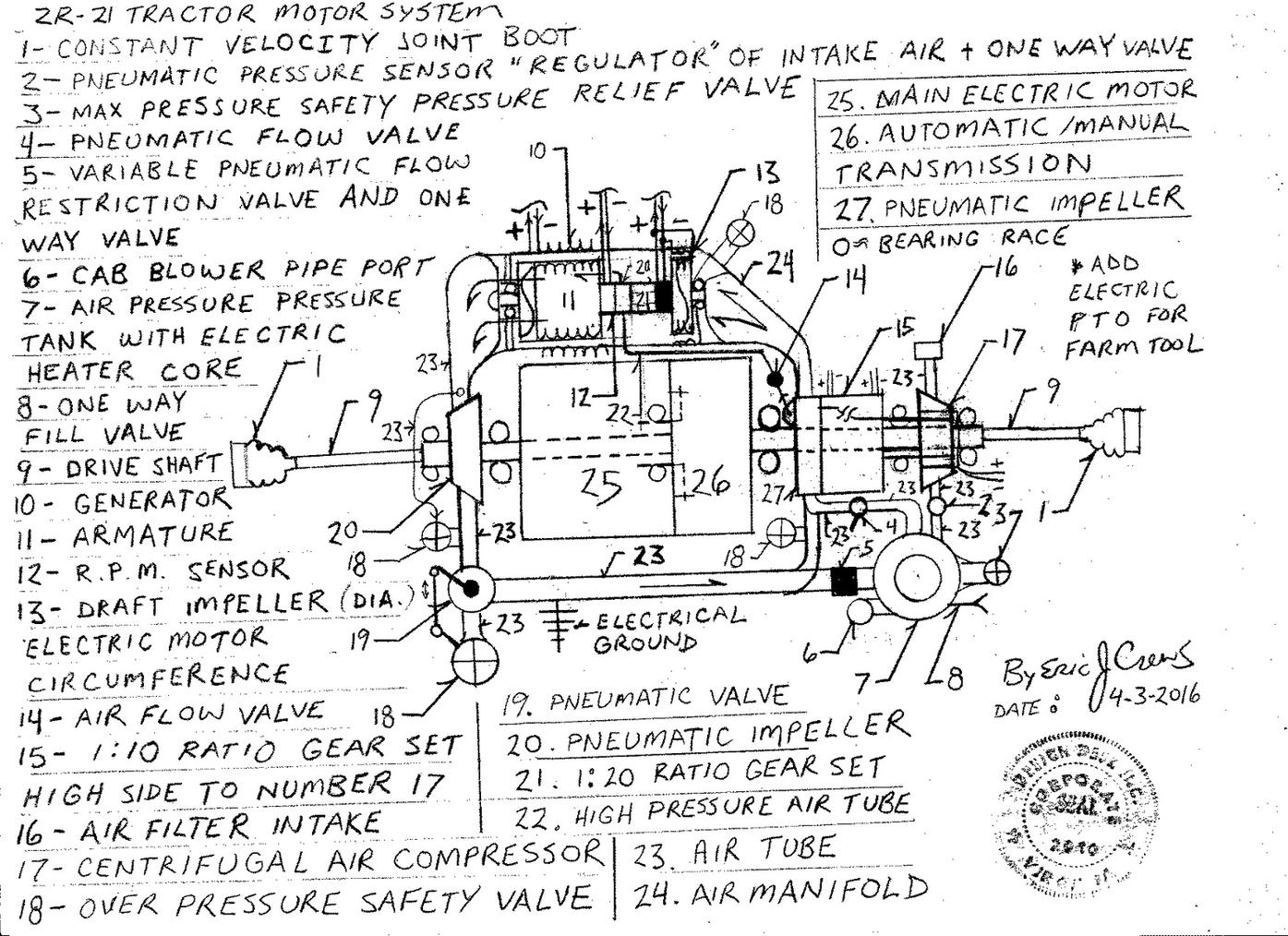 The ZR-21 pneumatic electric motor system is alternative to current rotational motivation systems then being able to replace fossil fuels for transportation as the effects of peak oil will effect agriculture in an adverse fashion...  This system may be used for food production and  distribution / transportation . Distribution cost associated with food security are then reduced and clean water availability for agriculture and domestic use is then increased  by it's implementation..

In the system design that follows..it may seem that redundancy in function is occurring ( causing a more expensive product ) however... it is then the intention to allow for multiple pathways of operation to then allow for continual operation should component failure occur. This is so that the functional operational requirement of the system is then not interrupted .  This can be critical for safety in certain situations.

The "Start" cycle is then as follows;

With the pneumatic pressure then stored within number 7 the air pressure is then released and impales number 27 then causing rotation of number 15 causing increased rotational rate of rotation in number 17 and also by number 15's internal magneto ( permanent magnetic / compounding 12vDc then inverted to 120v Ac ( alternating current ) with the magneto then yielding a start current then feeding electricity to number 13's  field coil producing rotation and pneumatic velocity in number 11.( compounding = variable current level intensity in the field coil / stator ).

Number 11's electrical production is then controlled and regulated and  allows for number 25 to then have the required current to cause it's rotation. The high side ( rotational output ) of number 15 is then causing greater rotational rate in number 17 when the electromagnetic clutch is then engaged ..yielding a "gain" in pneumatic pressure to then occur . The "gain pneumatic pressure is then also regulated by the pressure sensors monitoring the air pressure and determines when safe operating limits have occurred.  The electromagnetic clutch will then be allowed to slip...... The clutch automatically adjust it's tension effect... so that it doesn't  cause over pressurization of the pneumatic flow system.

The pneumatic feed in number 21,   ie thru number 20 upon the stepped "z" ( velocity rate compounder ) tandem with the high side of the gear set then counteracting the resistance produced from the increased rotational rate caused when using a ratio gear set. It will then cause number 11 to have an effect of "tilted" incline yielding both increased electrical production and pneumatic velocity flow rate.

Number 11's electrical out put is then directed in a split percentile then to cause 45% - 65% of  it's generated electricity to then be allowed to be reintroduced to number 13 to cause a compounding tilt incline in final total electrical output of number 11  and the remainder of the electricity then fed to number 25 ( main electric motor/ electromagnetic clutches / compound magneto) . This  counteracts the "baug" effect when loading is placed upon number 25. .( ie. when loading is placed upon number25 the systems current levels will increase in proportion to then always allow for more electrical power availability than is then being demanded from the electric motor number 25...  ) The unused remainder of electricity is then also available for the electric motor upon the P.T.O. and or water pump electric motor.

Note  - Their is an addition connection tube then also branching from a "tee" fitting then placed before number 20 post number 11 to then control the maximum pneumatic pressure into the centrifugal pneumatic impeller number 20... the "tee" fitting then has a connecting tube that then vents into the base of number 18 ( over pressure / max pressure safety valve ) the max pressure safety valve then allows for the lowering pneumatic pressure by venting the air pressure externally of the system ie. vents to the outside air.

Note - Control of the static electricity is critical within the system multiple additional electrical grounding points may be required. Also the pneumatic flow tubes may then be insulated and monitored for electrical charge building ( capacitance ).

Note - The pneumatic impeller, number 20 ( post number 11 ) , is then used to then cause the nullification of the " rotational resistance" / "counter torque" or "resistance weight"
( rotational weight ) and is an automatic transmission itself then locking to the drive shaft number 9,  This addition of number 20, then transmission itself, compensates for inertia weight of the electric motor number 25/26/mass of vehicle and vehicle's acceleration inertia...( gearing the referencing total mass of the vehicle ).  ( note -  not referring to the physical weight of the transmission ). The internal torque conversion then not to cause a run away effect but to rather allow the main electric motor , number 25 to then have greater effect.... The internal torque conversion in number 20 post number 11  requires "limited slip function and or additional electromagnetic clutch system... ( intent  to cause a weight less tendency within the math of the mechanism.. )... The engagement of 20 ( post 11 upon number 9 ), is then also load or "pay load sensitive"  and or  ...function sensitive.. ie. for long haul semi trucks then the mechanism would then engage with greater effect to prevent a heavy truck from slowing down upon an up hill incline. This avoids a traffic pattern problem that is a hazard upon the highway... ie number 20 is a "load balancer".... ( pneumatic impeller connected to a torque converter driving an automatic gear system ( switches gears automatically by internal hydraulic fluid )...with the out put torque then attached to one side of an electromagnetic clutch ( r.p.m. sensor monitoring ) with rotational output of the electromagnetic clutch then by gear interlocking to the drive shaft causes the drive shaft to rotate. Cooling of the transmission fluid then also incorporated in the casing of the transmission ( radiator + shaft driven air blower fan ).

Note - Number 21 has mounting brackets for stable operation also then upon the opposite end of the assembly at terminal end of number 11 with sealed bearings contained therein..

Note - Additional assemblies are then combined upon the tractor to then cause a AWD (All wheel drive), 4WD ( four wheel drive platform )

Note - Additional system can then be added for farm implement .... ie. to then use the system to power the  pto ( point of transfer ) farm tool rotation unit. ( hint water pumping... :)

Note - System is able to be produced in many sizes.. for small tractors then being at lower production cost ( both in  implementation and raw material cost of production ).

Note - High side of number 21 is then toward number 11 Number 11 is a generator upon it's circumference and a pneumatic compressor across it's diameter via propeller.

Note - Number 27 is freely spinning upon drive shaft number 9 in tandem with the magneto within number 15. The  magneto is then tandem locking by gears interlocking causing then the  1:10 ratio gear set to rotate also spinning the inner part of the electromagnetic clutch to then rotate within number 17. This then causes the inner part of the electromagnetic clutch to rotate at 10 times the rotational rate of the rotation rate of the impeller number27 producing a "gain" in air pressure volume also then regulated by fault system hard linkage  ( causing air pressure dump ) and electronic monitoring and control system.

Note - The excess "gain" air pressure is then also able to be directed across the exterior of the windshield and exterior review mirrors encasement  to then reduce the aero dynamic drag upon the top half of the automobile when the vehicle is in forward motion. This can then cause the vehicle to have an advanced level of protection providing greater visibility during snow, sleet ,, and rain events.

Note -  Number 20 then also contains a torque conversion system by sealed silicone oil lubricated gearing system that changes high rotational rate to high rotational torque of the pneumatic impeller,  then engaging by gearing  to an electromagnetic clutch ....when energized then engaging the locking gear to add rotational torque to the core drive shaft. the actuation can be made to be vehicle load and topographical sensitive ... ie. So that a heave truck with pay load will not slow down climbing up a mountain or long incline to maintain the speed limit for safer travel for themselves and other vehicles. Number 20 then also acceleration sensitive... ie. system responds when throttle is calling for vehicle speed increase.

Note - The variable resistor / potentiometer then the vehicle "throttle" ( foot pedal),  then also having direct circuits [ safety fault ( hard cable )] and  secondary system "throttle circuits"      ( because the potentiometer is an electrical component ) will then indicate if a fault is encountered in the primary circuit the fault system will automatically switch to the secondary system so that the function of the "throttle" system in not interrupted.

Note - Vehicle will also contain automatic fire extinguishment system and components then fault  indicator for to much heat produced monitored by the logic electronic circuit boards..

Note - As a repair assistant... this design system will then give indication to component fault / failure and display the information upon the dashboard instrument cluster to then illuminate a display to then give the failed components number ( clearly printed upon each individual component ) to then be replaced. the system then being an on board diagnostics system with the ability to specify component fault and or then contain switching option to then re route the component function to then continue normal operation by then rerouting required circuits without having to actually physically / manually changing the failed component. this makes easy if in a situation that continued operation then is being required to then later deal with the condition. Critical functions when the vehicle is in operation will or can then be caused automatically ( electronics logic board ) so not to encumber the safety of the vehicle in operation.

Note - Number 18 ( over pressure safety valve)  will also contain a pneumatic pressure sensor  that also will monitor for static electricity and report both information streams by wire to the logic mapping computer ( system control electronics ) . The actuation of number 18 between numbers 19 and 20 ...will then also then determine the current level then being fed to number 13.  This causes a controlled rate in the "z" component ( also has the ability to increase the stator in number 11 / causing a slowing effect and yielding more electricity ).  The additional max pressure over pressure safety valve number 18 post number 19 then also being attached by hard linkage will then engage by velocity flow acting against coil spring tension and within the component will also have a solenoid to then hard actuate the venting of pressure when the pair pressure sensor then determines that the containment pressure has reached maximum operating mechanical safety limits. the solenoid will then cause maximum dump when the system max fault ( all stop function  ) occurs... Number 18 vents to the exterior of the system and if used in a sealed Argon cycle system will then discharge to the gas ( Argon) containment circulation pressure tank that is also equipped with system re pressurization pumping system.

Note - In lieu of using open air then cycling, an addition inert gas ( Argon ) may then be used to cycle the non conductive inert Nobel gas in a sealed ( closed loop ) cycle system with in the following design.