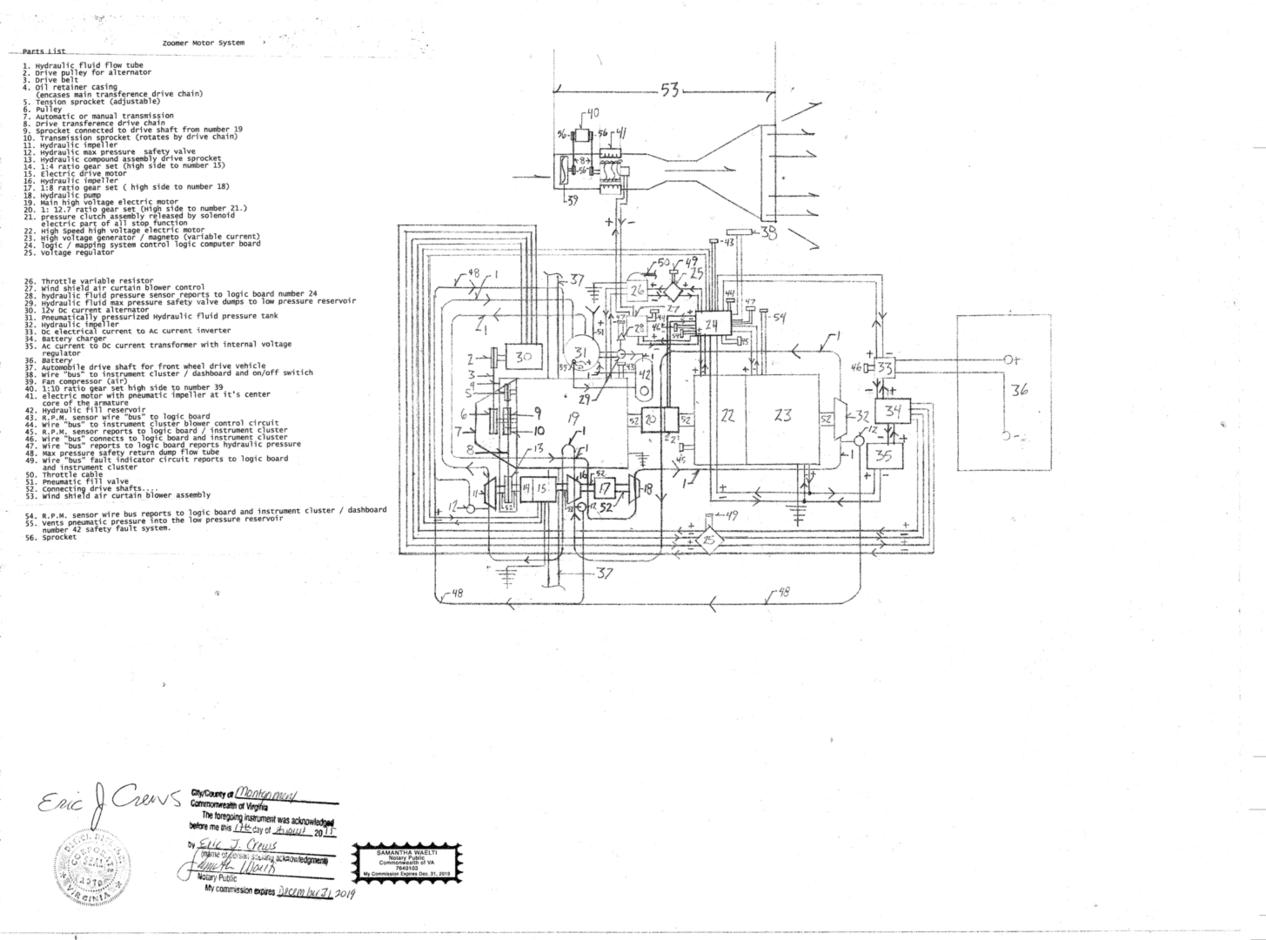 
The Zoomer is an electric motor system that is intended to provide an electric automobile constant current  yielding a self charging unlimited range electric vehicle. The design system is an Ac current Dc current hybird but can also be an all Dc current system (omitting the Dc to Ac current inverter and replacing it with voltage regulator).
Number 53 is an idea for advancement in driving safety  to assist in better visibility during inclement weather by producing a curtain of forced air across the wind shield to blow rain / snow away from the glass to yield better visual clarity. As an option a heater may be added to prevent exterior icing. This mechanism (number 53) may also be implemented upon other types of automobiles but force vectored and implemented as a "air plow" vectoring in the driving direction of the automobile to counteract the effect of resistance produced when traveling through the atmosphere.

Electrical current derived from the battery (Dc) is inverted by the Dc to Ac current inverter  allowed by the "on" switch on the dash / instrument cluster and then energized the mapping logic board that controls the current levels in all parts of the system (except the throttle actuated by foot pedal) to attain the base "idle" of the motor system.  For example...if 50Kw ( Kilo watt)  is fed from the battery to current inverter and then to logic board and on to number 22 electric motor then the stator /  field coil of number 23 is then at a reduced percentile of the input current in number 23 yielding 40Kw - 45Kw (output of number 23) ...with that current level (output of number 23) then directed to number  24,26, and number 19 then causing a pressurization of a "tilt" when number 19 is then set at base "idle" of 800 R.P.M. , with rotational magnification then increased by the ratio gear set number 20 yielding an increased current output in number 23....then the cycle becomes "load reactive" pressurizing an incline that is tilted and counteracting the resistance by re-introduction of generated current .

The battery feed current into numbers 22 and 23, is replaced by the increased current level produced in number 23 when the system is active with a slightly increased current level than original input (battery start feed ) into number 22 a proportional incline in current intensity can then be determined by rotational rate of the electric motor number 19 . The excess current produced in number 23 then can be applied to the advancement of the entire system by increasing the current into numbers 19 and 15 allowing and unlocking horse power as the current that can be applied will increase as the system speeds up. The battery will only being charged when at operational speed to allow high charge at next re-start.

Ancillaries may be added to the drive belt system such as power steering pump...air conditioner compressors power break pumps...etc..

The fluid Hydraulic system / cycle may also be replaced / substituted with  a pressurized pneumatic cycle......air pressure acts also in mechanics as a fluid.......

The hydraulic fluid pressure system is in place to also reduce the resistance produced while generating electricity... allowing a greater rotational effect by the applied magnetic pressure in. number 22. The hydraulic fluid flow system is positioned upon the pumps/ impellers to give a congruent rotational direction (so all components rotate in the same direction). Number 15 (electric motor within hydraulic system)  is electrified and causes the counteraction or the resistance from the gear set number 14 and 17 assisted by hydraulic fluid velocity flow through impeller number 16. Number 15's feed current is derived from "hot" post current number from number 19 and then also regulated and controlled on and by the mapping computer logic board by referencing the R.P.M. sensors rate that obtains the "base" idle and power levels required for sustained operation. Also should be noted the circuit current level for number 15 is also determined by the throttle....number 26 with  circuit off control as safety fault in number 24.

Also must be noted ..within the hydraulic impellers there are contained reducer gears to transfer high speed hydraulic fluid flow into high torque mechanical rotation at a lower R.P.M (revolutions per minute) so that the "idle" effect does not become a run away result. Number 55 is an electric  control valve that allows for pneumatic pressure to dump into the low pressure reservoir and then the air pressure will escape through the safety pressure cap on number 42. The pneumatic pressure can then be refilled by an on board 12v Dc electric air compressor not depicted. So when number 55 is activated it will push the hydraulic fluid back to number 31 lowering the fluid level in number 42 through the return tube also containing a one way valve      ( one way valve / required for active run and hydraulic fluid pressure in number 31 while in operation). This function of fluid flow is required post activation of number 29 (if pressure exceeds maximum safety level in number 31 ).

..also the retainer spring within the hydraulic  safety pressure valves will be set to correct tensions to allow for safe operation.  The valves will open during operation. This flow system allows for null resistance when fluid across number 11 is then converted by it's internal gear reducer and causes an effect of a "weightless" transmission ie. reduces the resistance in the transmission and increases the effect of feed current

A pneumatic "start" system may be added to this design to then allow the omission of the battery itself. The additional component would the consist of components as follows , an air pressure tank venting pressure to both sides of a gear set impaling an impellers upon both sides of a gear set, with the high side of the gear set the being larger pneumatic volume and also containing the generator  ( permanent magnetic Dc / direct current and or  / high voltage  with magneto) then with the generator system also being able to be used as an electric motor to the cause the "pneumatic impeller to then act as an air compressor to re fill the pneumatic pressure storage tank for the next re- start.... This reduces the over all cost of the electric car and corrects a potential waste disposal problem that might occur from disposal used batteries..

The position of the motor system in respect to the transfer drive shafts (ie. to the drive wheels) is in the transverse position but may also be rotated 90 degrees , to be in a in- line position to change the required dimension for the motor compartment. We have found that current automobile "engine" compartments are to small to work on and or maintain the engine motor systems..the depicted motor system will also be mounted upon a "slide rack" so that the motor assembly can be extracted from the automobile with ease. There will be dual plate union plates that un- bolt on the drive shafts and addition mounting threaded bore holes to mount roller wheels on brackets to allow for the entire motor / transmission assembly to slide out from the front of the automobile. The grill plate / front frame of the auto body will also have removable bolts to allow for motor extraction. The slide rack mounting assembly will also have locking bolt bore holes..