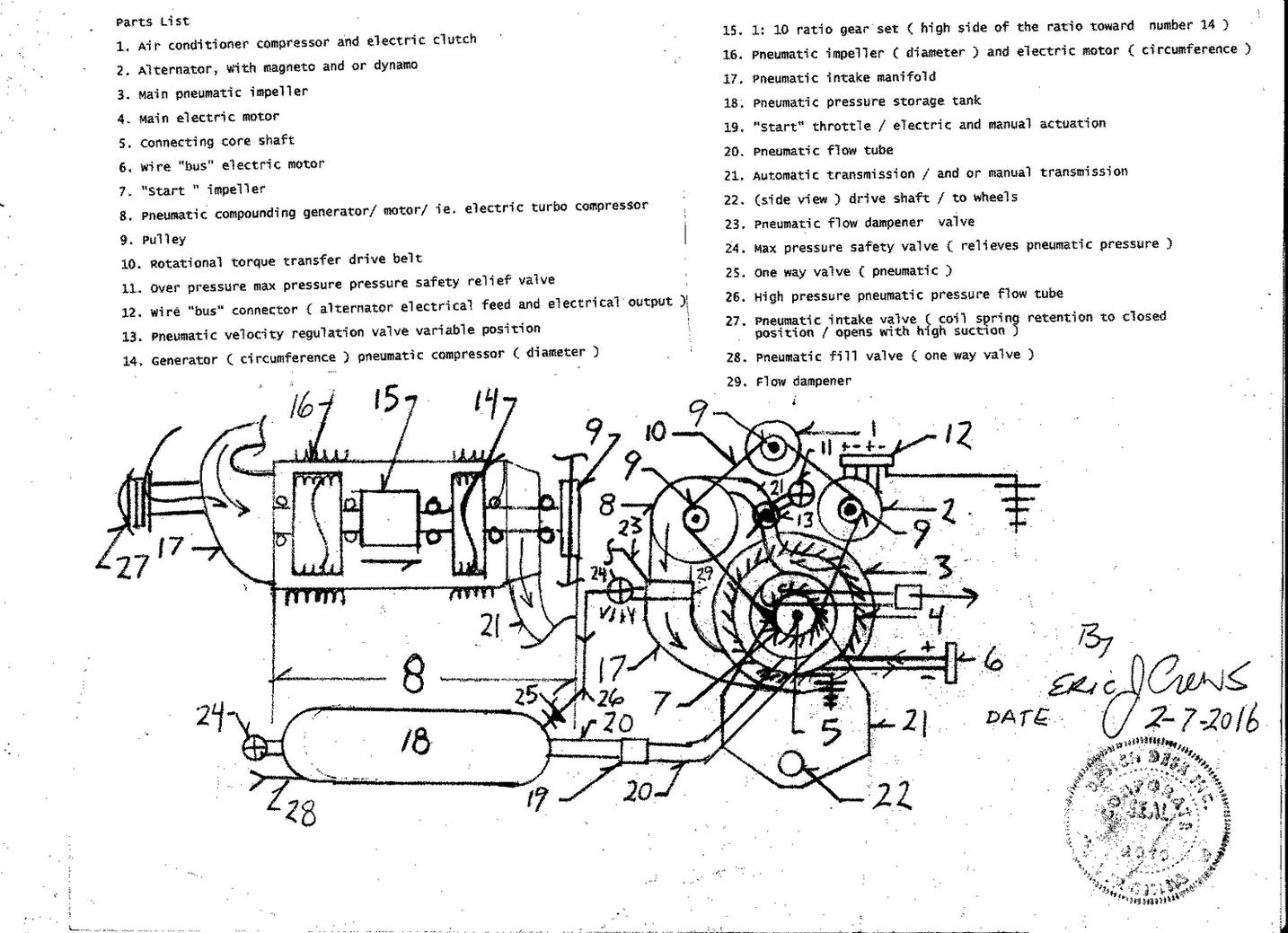 Upon the main drive line containing number 4 additional components are required   from left to right the assembly will be as follows;

* Note - Number 14 powers number 16 and the field coil for number 2. Number 2's electrical output then feeds current regulated and variable  ( by throttle ) to
number 4 , main  electric motor. ( alternative power system flow path ) Number 2 then alternator ( with magneto  to then power number 16 then motivating number 14
with the resistance of generating then counteracted upon by pneumatic velocity flow, with number 14 then feeding electricity to number a variable resistor / potentiometer
then to number 4 main electric motor. The additional dynamo upon the modified belt system then can be redundancy for 12v Dc production and or as an electrical production
point to then feed the Stator / Field coil in number 2.

* Note - The drive belt system may also be of another path...  then a pulley system that loops around number 1,2, and 5. then leaving assembly number 8,9 to then have an
additional dynamo upon its own independent drive belt system with an additional pulley connected to the additional dynamo then driven by assembly number 8.  This allows
for extreme rotational rate of number 8. )( also R.P.M. monitored by R.P.M. sensor ( revolutions per minute ). The dynamo may the cause electricity then inverted from
Dc to Ac current to then compensate for the "baug" / loading " of the electric motor when work is required from the main electric motor number 4. The altered drive belt  system
then derives starting electricity then from the generator number 2 feeding  electrical current  regulated to number 16.

* Note - Additionally the system may be "dipped" in a non electrically  conductive " plastic resin to then act as an electrical insulator.

* Note - The  system's  pneumatic discharge then may also be directed to vent across the wind shield of the vehicle to aid in visibility when encountering inclement weather.

* Note - Additionally a added pneumatic impeller will then rotate in tandem connected to number 2 upon the back side of the generator to the counter act the field resistance produced
while generating electricity. The pneumatic feed pressure at velocity will be directed from the exhaust of number 7 then to the said additional pneumatic impeller upon the
back side of number 20. The discharge pneumatic  pressure of the additional impeller will then be directed to the air flow dispersion bar / vent that discharges high velocity
air across the wind shield.

* Note - An over pressurization max pressure two stage safety valve ( pressure relief ) will also be added upon assembly number 8 post number 14 to then feed first stage pressure
relief to the  internal pneumatic impeller within number 15 ( 15's pneumatic impeller tandem to the high side of the ratio gear set ) to then vent into number 8's inner
chamber and cycle..the second stage of the max pressure safety valve post  number 14 within number  8 will then be able to vent to the exterior of the system also
containing component fault indicator and pneumatic pressure sensor that reports  to the mapping logic  circuits. The velocity rate ( R.P.M. ) will also be reported for
number 8 ( both sides of the ratio gear set)  to the system management logic / mapping  circuit electronics to control the system for safe operation.