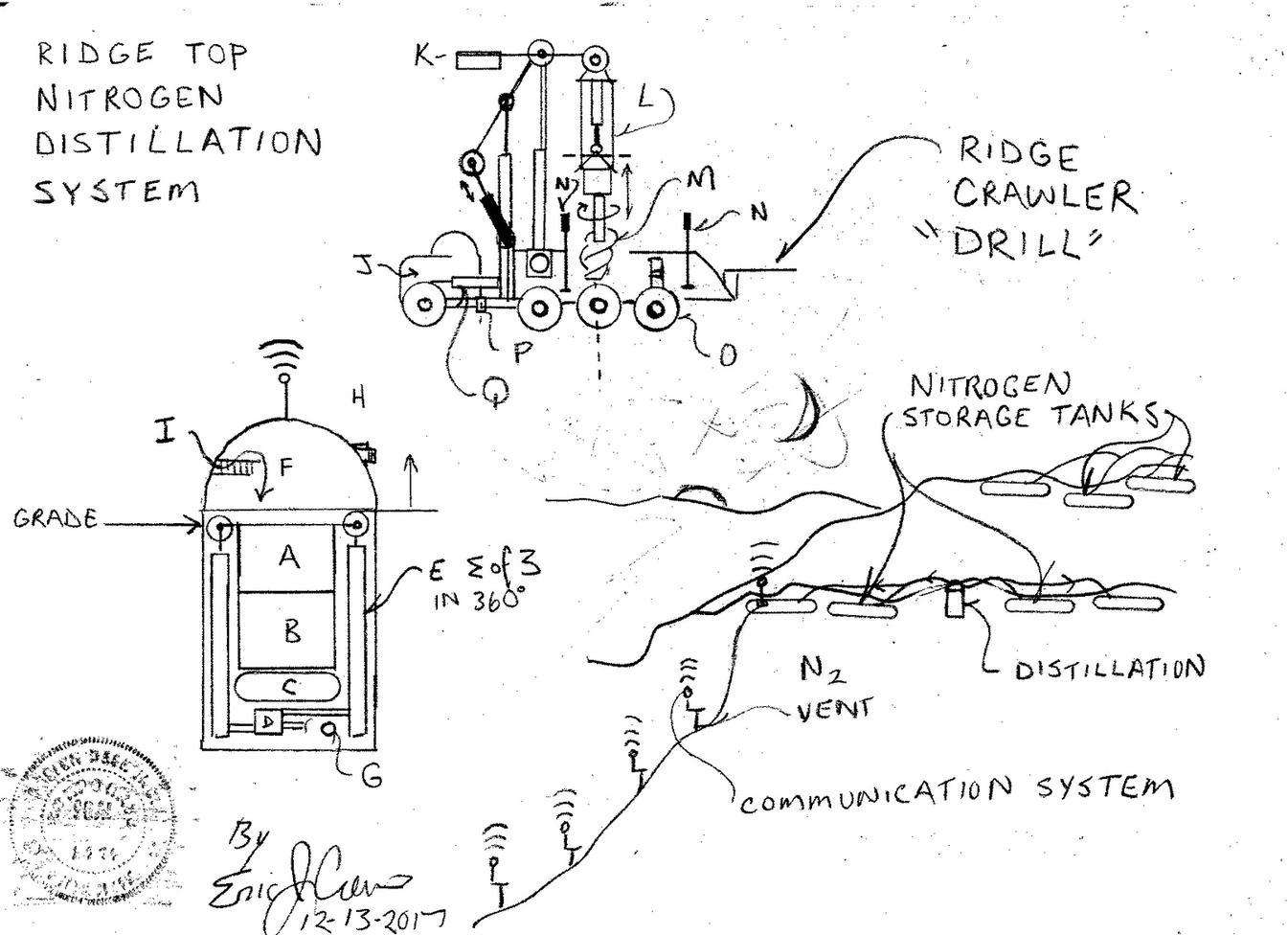 The following design system is intended to be an immediate first response to out of control wildfires with the system able to be activated remotely. The design extracts Nitrogen ( N2) from the air and stores the gas as liquid N2 in buried containers to then be vented to displace the oxygen in active fire zones. The system will require safety fault encryption as a digital lock with redundant check command to open the connected remote valves to extinguish the fire.

B. atmospheric distillation system ( to obtain Nitrogen from the air and direct it to storage as liquid N2

C. pneumatic storage to then lift the distillation system for maintenance

The N2 storage tanks then vent upon digital command to the vent heads then connected by  buried hose system to extinguish wildfires remotely.

a mass wheel "gyroscope" then will be contained within the ridge crawler to assist in the system horizontal and vertical stability the systems depicted at http://www.designdeskinc.com/semi-truck-trailer-gyroscopic-stabilizer.html

The mass wheel within the ridge crawler will differ slightly from the semi truck trailer model due to the increased topographical incline / "hill slope" that the system will encounter then being able to tilt upon the horizontal plane to compensate for the topographical inclines....The tow trailers will also contain the system.

*Caution- if implementing this system the dispersant ( N2), area must the be monitored and checked post use for correct oxygen levels.  Nitrogen is slightly lighter than oxygen and will rise shortly after release when the cold of the nitrogen has  been heated when releasing it into a fire.... none the less fire fighters in the immediate vicinity will need to monitor for atmospheric saturation and must use a re breather CO2 ( carbon dioxide scrubber upon a back pack).

The ridge crawler will drive atop the ridge and drill holes to place the distillation systems in place... the units are a bit heavy so the lifting then by a hydraulic piston " boom" with articulating clasp mounted upon the trailers.  The ridge crawler then also equipped with a tow hitch to pull the trailer then having upon it the N2 tanks, valve connectors, and hose fittings.

A ditch saw will then trench for the N2 tanks and the boom equipped trailer from the front leading edge of the trailer allowing the boom with articulating clasp to lift and lower the N2 tanks in place. Shallow earth cover will hide the units only leaving exposed the communications antenna that receives communications to control the dispersal valve system.

The dome of the distillation system will also remain exposed. The coupling upon the distillation system then with sensor to indicate if tampering is occurring then allowing an alarm and signal sent with internal safety fault system shut off to ensure the N2 is not inadvertently discharged. The communications antenna will contain a lamp at the top to then act as a ridge marker for aircraft to be seen in fog or at night.