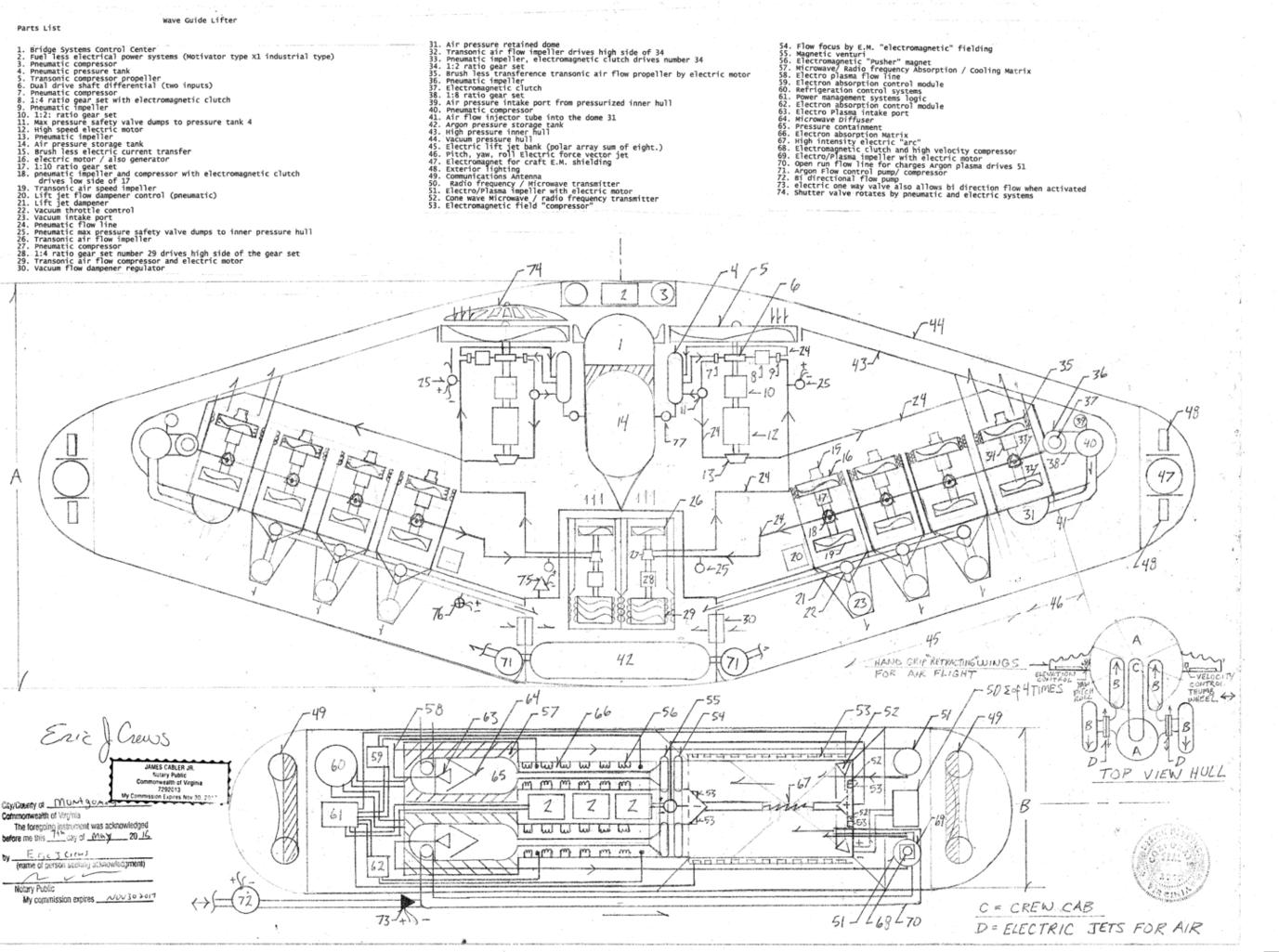 This design is an attempt at long range high velocity space flight sustained upon a fuel less platform.  The schematic is demonstrating that sustained gas pressure (inner hull) contained within a vacuum envelope with offset gas pressurization rate can in deed lift a vessel with no exterior discharge from the craft. The "inner" hull is attached to the "outer" hull by support braces to cause lift of the vessel.

Once initial pressurization of the entire craft is accomplished by compressor number 3 , pressurizing the entire hull, then the Motivator Type X1 spins up producing electrical current to begin the rotation of the compression cycle producing vacuum between the two hulls. Number 3 also pressurizes the air tank , number 14 with natural atmosphere.

With number 2 "hot" it will then route through the control circuits contained within the Bridge control systems and then electrify numbers 12 ,16 and 29. This causes vacuum between the two hulls and allows the high pressure pneumatic discharge in array (3-8+ times polar array)  of number 45 and 46 to begin their spin up cycle. Once the initial inertia is overcome the electric motors switch to their generating function then feeding all electrical current requirements contained within the system.  Permanent high capacity magnetic magnets can be used for the generating system ..to increase available current but number 16 also contains compounding magnetos. The system can be either Dc or Ac current depending on size and application.

At that point the Motivator Type X1 , number 2 contained in the "disk" can the be turned off.  Because this is a flight vessel weight becomes a major design factor so we will choose to use advanced light weight material for hull and component construction.  Carbon graphite Hexagonal hollow ( or gas filled to reduce exterior radiation) tubing in a honeycomb matrix  forms the hulls an can can also be in a total form laminate as large sheets of material to minimize the seams.Between the Hexagonal carbon graphite tube matrix..producing less possible failure of function points.

The small disk "A" can separate  from the larger craft as a evacuation vessel and then the augmented electric air jets with electric arc compressors "Arc Jets" become active for horizontal force vectoring. Arc jets focus "lightning" exhaust....

This schematic is to demonstrate the flow cycle...the mechanisms internal workings are supported by brace and support beams where necessary.

The lift jet dampener restricts the vertical vector pressurized air displacement and is adjustable to allow greater air flow displacement. The variable orifice opening
is controlled in number 20 and the opening diameter determined by lift jet engine speed. Number 20 is a pneumatic system pressurized and sealed variable piston pressurization also containing active pneumatic feed and recovery of system pressurization. In start position dampener is closed and has pneumatic pressure keeping the dampener closed ...when the vertical lift jets apply pressure upon the dampener ..it causes increase pneumatic pressure in the pneumatic flow tube that then pushes a pneumatic piston in "sealed chamber" and the other side of the piston has pneumatic pressure that is variable pressure and pneumatic feed controlled pressure from number 14. Safety fault check circuit is with in the design to prevent dampener closure when in operation.

The Argon stored in number 42, is pumped into number 72,72, and into the cavitation within "B" , Wave Guide Engine. The Wave Guide Engine system has two transmitters, one conical that will cross within the high intensity arc and the other circular that will compress the electron spray into the cylindrical electron absorption chamber containing the "pusher" electromagnets that cause the flow of electrons to be absorbed within the absorption matrix number 66 causing a "low pressure effect". The key is flow restriction at the magnetic venturi. Craft heating can be extracted from the argon via heat exchanger for all occupied spaces within the craft.

Because the Wave guide engine system can travel at such high velocities the manipulation of the Boson field will be require to  then field around the exterior of the craft.. Also possibly as an augment to the aft of the interior of the wave guide engine.

The space craft will have within the hull connecting the two disk "disk lifter" sealed engine systems to "troll"  slow to mid grade speed for the craft. Included in the " disk lifter" system within the hull will be for forward flight, reverse flight, port and starboard force vectoring, yaw pitch and roll.

Clarification to the cone transmitter and the pusher transmitter..and ...the focus transmitter is correctly positioned as circle with the circumference smaller ,tandem (connected ring... connecting but not effecting the cone), and larger than the cone transmitter "pusher"  ("horizontal" force vector). The outer pusher transmitter is in-line with the magnetic venturi cylinder. This allows for the bending of flow to focus the electron scatter into the magnetic venturi increasing the pressure and speed of excited electrons.and or ionized argon. The Wave Guide "engine" will have redundant radiation shielding to protect against inner system leakage or exterior irradiation.

The upward vectoring vacuum pressure jets are in a block sum of four times total . The downward compression cycle (also producing vacuum) are in a horse shoe pattern and numerate according to size of construction of the craft. This is to allow space for the crew cab 3 to 5 compression jets...

Also must be noted that the "engine system flow cycle can also be repeated for horizontal "sealed" force vectoring.  This will allow for an additional push for direction vector.

* Note - As addition to the vacuum system the pressure return cycle into the chamber number 42 will then be pressurized by component "Z"
upon http://designdeskinc.com/Tri_-_Plex_Lifter.html