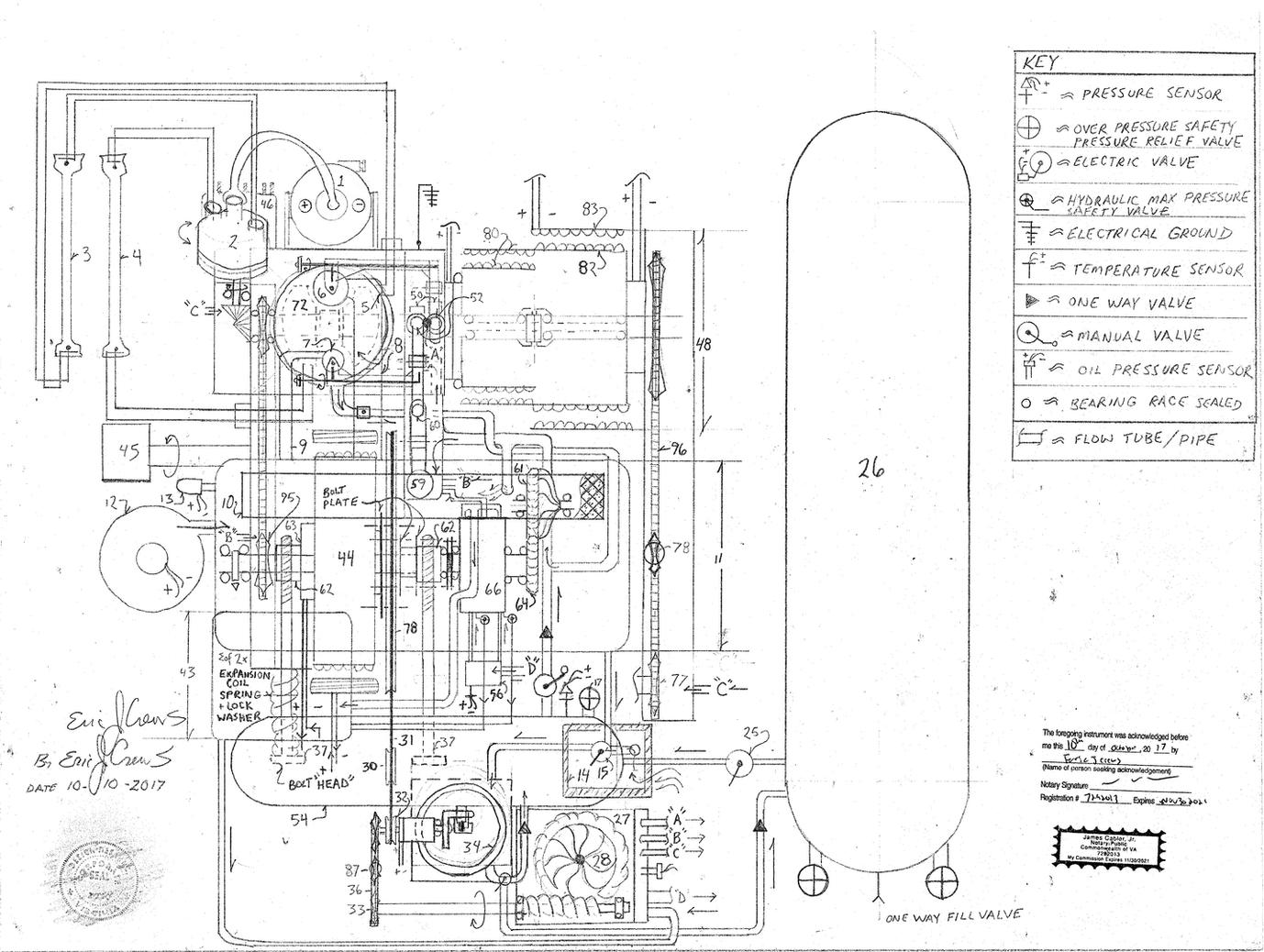 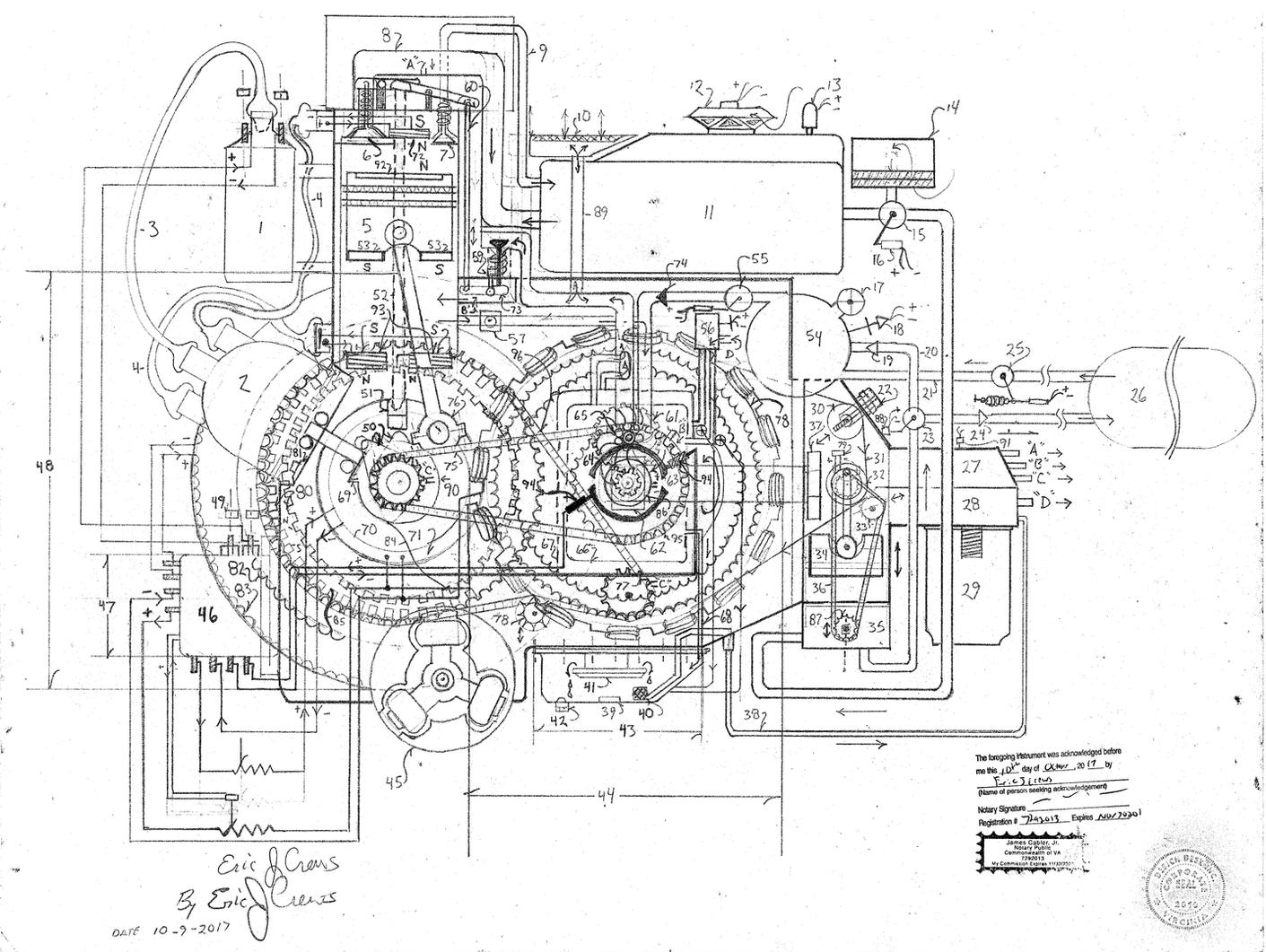 The following design system accelerated initially by the displacement of pneumatic pressure and then is sustained by magnetic repulsion by electromagnetic within the piston chamber / piston cylinder, and is caused to "tilt" advance by a draft effect by the systems produced vacuum cycle. The generated electrical current then is applied to the designs electric drive motor to cause rotation of an automatic or manual automotive transmission.

Please find a one cylinder version of the system below . Additional magnetic repellent piston system,  with multiple piston, can follow the same system flow cycle. Additional pistons with magnetic repellent and vacuum system can be incorporated where the final out put in horse power is required at greater levels. The crankshaft then has weighted lobes to balance the system with  an oribital rod bearing then connected on the crankshaft allowing for the full 360 degree rotation...

Please find the top view below;

Please find the side view below;

22. tension pulley adjustment screw and locking base by bolt

the air compressor "head" and valve assembly in number 35

35. air compressor "head" an over head cam driven by the drive sprocket number 87 then with one

45. drive shaft cup ( drive axle inserts into the cup) the drive shaft then to an All Wheel Drive  AWD transfer box

hydraulic impeller upon the out put side of the ratio gear set.

69. distributor drive gear ( rotates the electrical "firing" rotor within the distributor to cause intense

for the electromagnetic clutch

89. flow tubes ( with additional flow control valves  "electric " so that controlled pressurization of

94.  generator "brushes" upon the commutator

This engine system is designed with the intention to "diesel" ( continue to "run" ) then upon deep vacuum and "tilt" into forward rotation by magnetic pulse then with the additional magnetic "pressure" applied by the electric motor to then cause the system to yield perpetual motion upon a fuel less platform. The system then being started by pneumatic displacement with the air flow causing rotation by air pressure impaling a pneumatic impeller. The on-board air compressor allows the system to be able to recover the pneumatic pressure automatically by referencing the system stored air pressure pressure level.

The compound oil flow rate then increases the system initial "start" speed. The resultant electricity produced by the rotating permanent magnetic generator then electrifies the coil and feeds electricity to the distributor and piston electromagnets. The stored pneumatic pressure ( air pressure) then within the two storage tanks, is only displaced when starting the system...until stable high vacuum is obtained. This allows for the air compressor , number 34, to only be required intermittent usage. The air compressor is not require to "run" all the time.

The valve system upon the piston system then is as follows ... Number 6 is a larger diameter to cause a deeper vacuum within number 11 upon each down stroke of the piston. The down stroke is forced by the electromagnet in the cylinder "head" firing. This also causes the air under the piston to compress and exhaust directed to the pneumatic impeller, number 61. Number 7, then opens upon the up stroke of the piston ( opening to suck the piston - higher vacuum), with the suction pressure resistance under the piston then relived by the inverted valve ( assembly number 59) , opening at the same time.

The up stroke is then assisted by the casing base electromagnet "firing"  just after the piston bottoms out. The inverted valve , number 59, open sucking air in upon the up stroke of the piston . If number 6 is 100% diameter then number 7 is 40 % of the same diameter... so number 6 is slightly larger by twice the area ...the air compressor , number 34, then is causing  a deepening vacuum cycle until the operating vacuum level is obtained with the level then stabilized by the air inlet dampener valve upon the vacuum tank , number 12. The air compressor's electric clutch  is automatically disengaged by the vacuum dampener , number 12 , sensor sending electrical signal thru the electronics to indicate correct operating vacuum level has been obtained.

While the advancement in rotation is occurring. The  " generator "baug" rate is counteracted upon by increased  magnetism via electricity in the generator field coil increasing and greater oil flow through the ratio gear set. This yields more usable electricity for the systems functions.  The generator increase rate ( field coil increase ) resistance calculated by the oil flow compound cycle within the system to null "zero" the resistance in the math by allowing greater rate of oil flow within the ratio gear set. The electricity level in the field coil of the generator is automatically increased by circuit controlled variable resistor to yield more usable electricity output from the generator. The same circuit then engages the electromagnetic clutch operation simeutaneously  with the Main electric motor's variable resistor / potentiometer .. the "throttle's tandem velocity increase circuit.

Due to the nature of this system speed regulation is critical. To then control possible run away effect ... the ignition coil , number 1 has a safety system to them be able to be turned off and or it's effect reduced by controlling the current level from the coil... also an additional hydraulic dampener valve with fluid ( oil ) bypass flow tube ( two exhaust tubes to the oil pan) to control the oil compound cycle for controlled running  with the valve then placed upon number 56 then venting the oil via tube to the automotive transmission oil pan. The valve is then electric and with redundant positional solenoids as a safety feature. The said additional valve is then positioned by solenoids and controlled by referencing the R.P.M. ( revolutions per minute ) sensor upon the systems generator , number 44.

Factors also involving these type of engine systems.. the block and transmission then water safe and electrically insulated from the chassis of the vehicle to prevent any unwanted conductive discharge of electricity must be within the cars total system design. The observance of capacitance the being formed from static electricity produced within the system will the electrically ground to a plasma box  not the chassis of the vehicle. The block ( piston cylinder) may have a tendency to gause ( become magnetic ) due to the motion of the system..it most likely will not impede the system function.  ( stain less steel ) material selection of choice for all applicable system components. rust is dangerous! The air flow through the system then will act as a air purifier... minimal ionization will occur with the static electricity dissipation ( and discharge transformer  equipped to reintroduce the current  plasma box is a current harvesting system ). The actual physical exterior surface must also be electrically insulated and contained in an outer shell to prevent damage to the electrical insulation . The outer  "shell" will have the ability to "pressure check" by "compressed air" sensor to indicate or determine system integrity. The drive shaft  cup assembly (number 45) then containing a non electrically conductive segment composed of non electrically conductive material then to not allow electric current to discharge in a hazardous fashion.

* Note - In the final design the drive belt pulley , number 78 will be moved to the left ( as depicted upon the top view schematic) so the the  alignment with the smaller pulley ( total pulley and drive belt system moves to the left)  so that the alignment then remains.. ( air compressor / oil pump assembly also is moved to the left so the system works correctly) . This is applied so that drive belt change is an easier function. The large pulley then between the lubrication casing for the sprocket system and the R.P.M. sensor then upon the end of the drive shaft. The sprocket / pulley order upon the air compressor system then also is reversed so that the pulley is toward the end of the drive shaft followed by the sprocket ( contained in a lubrication casing with the drive shaft the the input to the air compressor's electric clutch and the drive chain the rotating the oil pump drive gear.