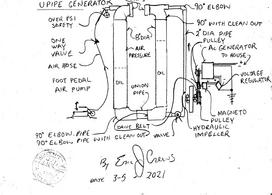 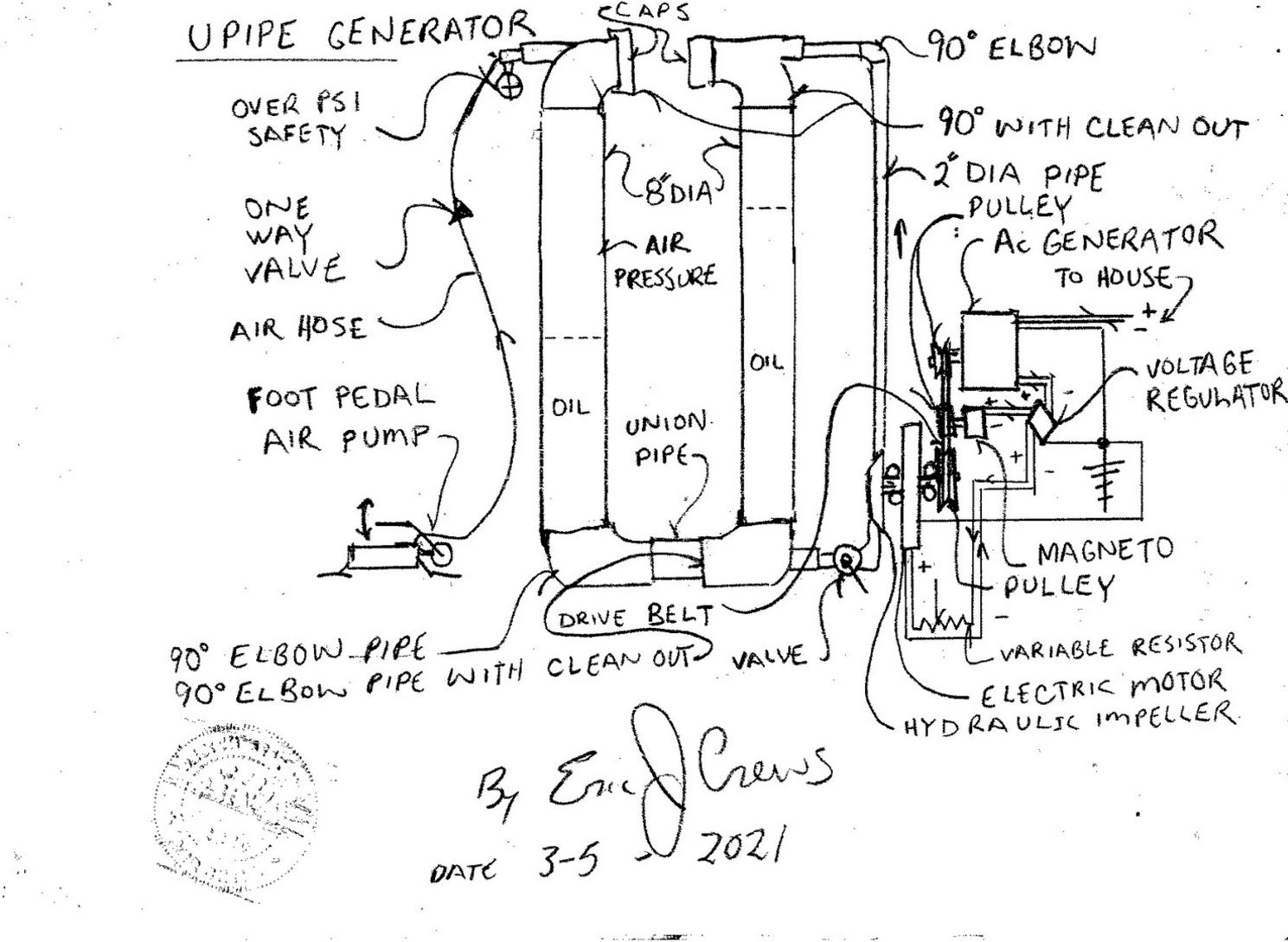 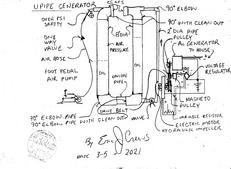 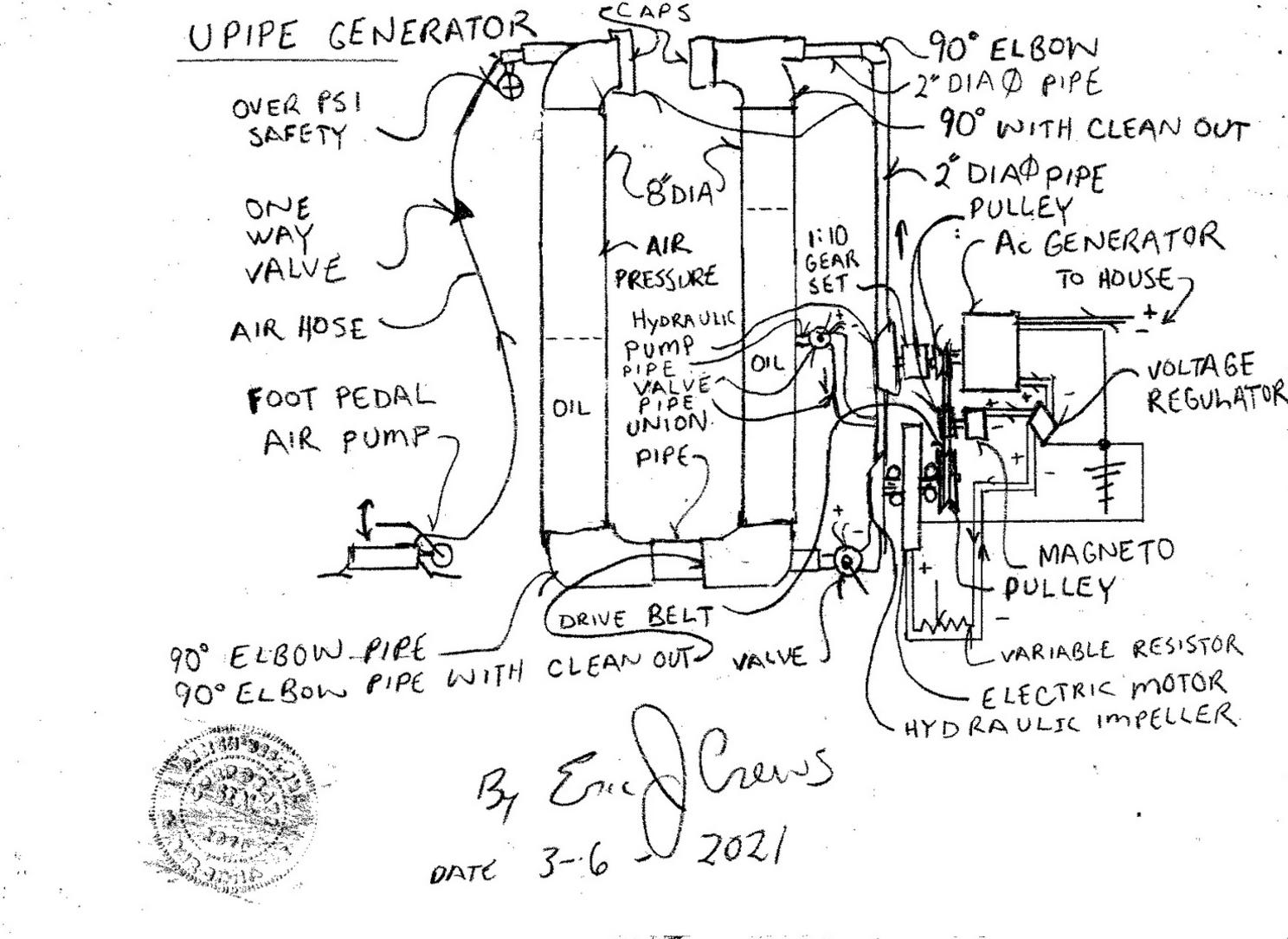 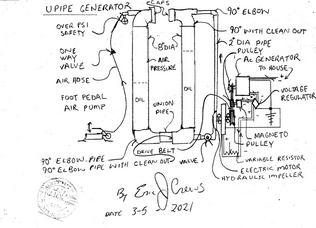 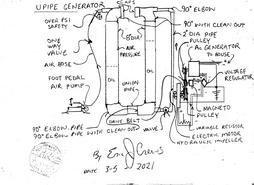 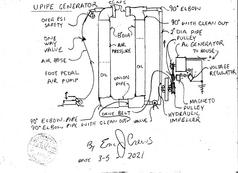 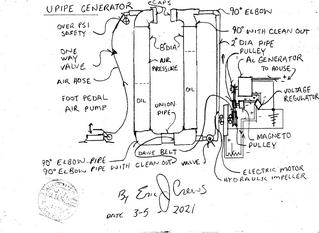 The Upipe Generator is a fluid drive electrical generator using air pressure and gravity as it's motive force. The diameter of both tubes a factor in the force equation along with the system directing a percentile of generated electricity back to the system drive electric motor to increase the rate of rotation yielding increased levels of electricity output.

Start sequence; The upipe is filled with silicone oil to the oil level lines with the oil column rise pipe (pipe on the right) then with the top pipe cap removed. The foot pump is then used to cause air pressure to the "system operating level" within the air pressure oil column until the oil level within the "rise pipe" is at the top of the column. The cap is then placed upon the "rise column top" to seal the chamber. The electronics are then position to the "run" position and the valve lever upon the control panel is manually positioned to "open" the valves via connected sheathed pull cable. This begins the oil flow cycle producing electrical current. The systems "settings" then determine the speed of the mechanism, electrical "re-introduction circuit" potentiometer position and position of the valves.

The above design system is then using air pressurized non electrically conductive and non flammable silicone oil to cause hydraulic pressure (standard motor oil is not to be used as vapor can become combustible!). The technique of air pressure atop oil pressure within a "U" shape pipe will "artificially causes a "higher" pressure level upon one column allowing the oil to "return" to low pressure air then causing continual oil pressure at the oil outlet valve. The "oil flow" then causing rotation of a hydraulic impeller that rotates a drive belt and pulley system rotating the system components. All flow pipes are electrically grounded to aid in control of static electricity.

The Magneto, then a permanent magnet electricity generator, will electrify a voltage regulator "to then" induce the field coil in the main electricity producing generator. The voltage regulated current from the voltage regulator will then also be able to be applied to the system's electric drive motor then also acting as a "flywheel" causing the "zero" point / launch point of magnetic "pressure" to then be applied atop the fluid velocity rate of rotation caused by the oil flow traversing across the hydraulic impeller.

The "drive pulley" then tandem with the system's electric motor is then of larger diameter causing the adjacent pulley to rotate at an inclined rate of rotation causing the magneto and main electricity generator to increase in rotational speed.  The main generator then with the field coil electrified produces usable levels of excess electricity. A percentile of generated electricity is then applied to the system's electric drive motor via variable resistor / potentiometer to then bring the generator to it's "rated" out put rotation.

The generator contains r.p.m. sensor (revolutions per minute sensor), and rate of rotation display to "adjust" the system total speed.  The generators are then explosion proof and use a sealed "inert" Noble gas within the magnetos and generators to prevent low level Ozone formation. The total system encased in a "shock casing" to prevent projectile hazard due to manufacturing defect becoming a projectile hazard. Sealed generators are air cooled... the outer "casing" allows for air flow.

Within the lower drafting the hydraulic pump then post hydraulic impeller causes the "hydraulic draft effect" to increase the velocity of the hydraulic fluid system with the additional hydraulic pump then rotating ten times faster than the drive pulley upon the unit assembly. The rate of rotation governed by the mid hydraulic fluid valve position mounted / positioned half way up the oil column pipe. The said valve then may be electric governed by the generators internal circuit referencing the r.p.m. sensor... to"automatically" adjust with safety fault circuit that causes system to "all stop".

The fluid weight then measured by it's specific gravity then being in volume grater than the mechanical and electromagnetic resistance encountered within the total system.  As the air in the air pressure column then is "pressurized" then oil in the connected adjacent oil rise column will increase in height lessening the vertical "return" fluid travel allowing the "pressurized" oil to then cause a "sustained" fluid "head weight" yielding constant fluid out flow pressure. This yields perpetual rotation of the mechanical electrical generator system and produces sustained production of clean energy.