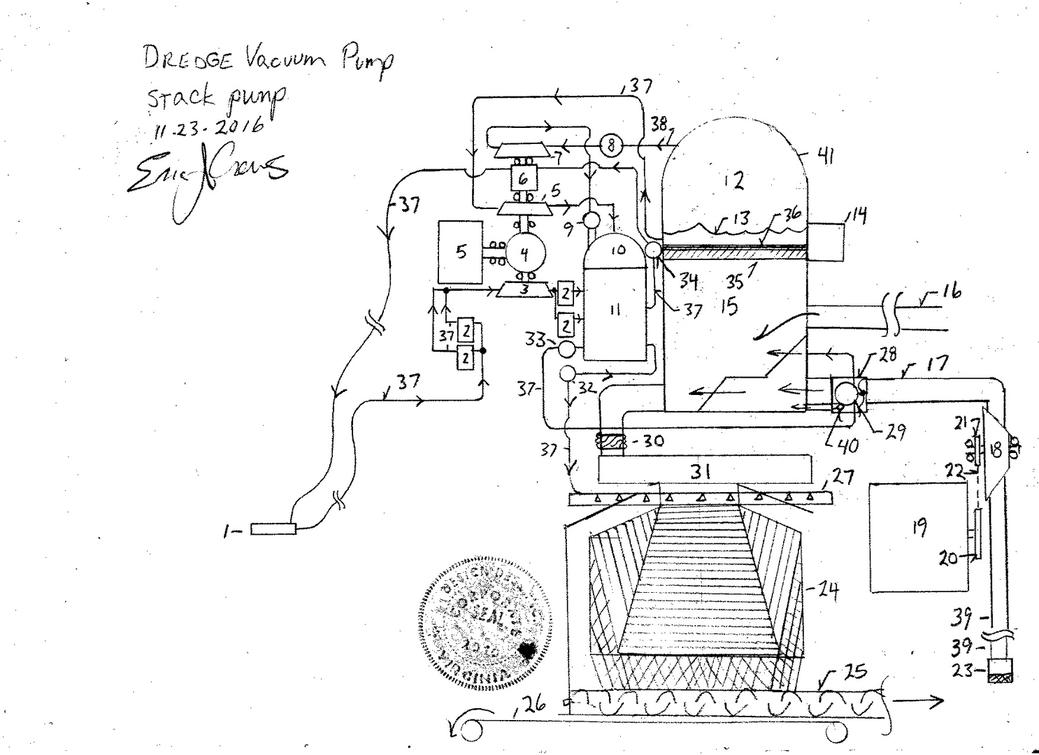 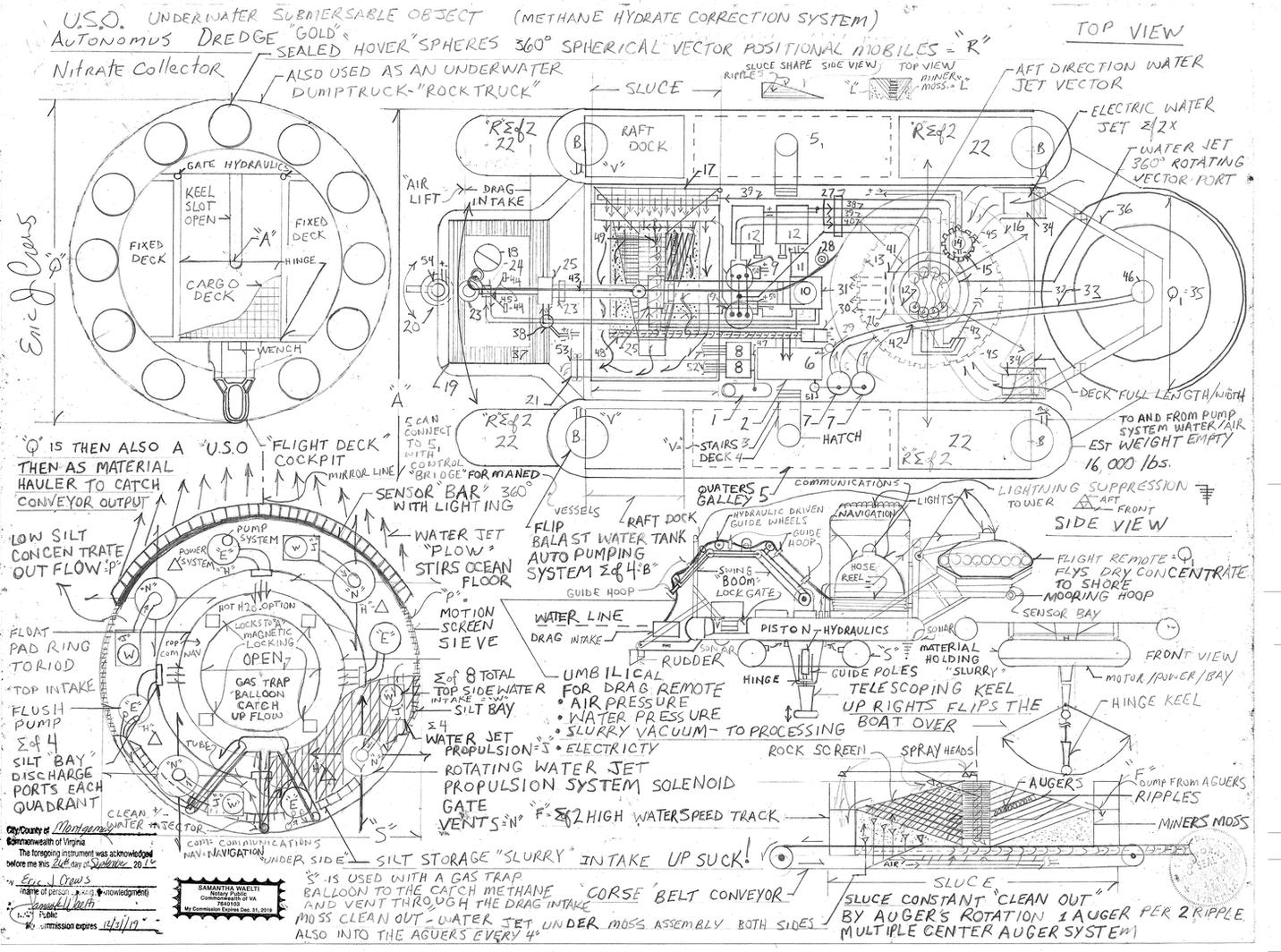 The Earth , through many billion's of years, has produced a bio hazard in the form of frozen Methane under the oceans surface and frozen  under the tundra.

Methane is also a greenhouse gas that has greater heat retention than carbon dioxide, this causes an alarm. The ocean, then with pressure and low temperature keeps the methane frozen until the condition that keeps Methane Hydrate  frozen in place changes , and this has been observed.The following design system can pay for itself and correct the problem.

The design is a catamaran with hollow pontoons with light weight construction ( carbon graphite / carbon carbon ) as the design is also a flight system ( air craft ). The system is a multi component dredge with the following system components;

" A"  = catamaran dredge with hollow pontoons

* The "Air Lift" / drag intake, then is used to suck material off the ocean floor to then yield gold bearing silt

6. Slurry intake from the "base ring" to feed number 2 from  letter "S"

contained within the system ( cant pump a rock? sure ya can... dual path redundant function

( ring shape ) within the hose reel ( sum of two ) actuated by an pneumatic piston ( also as a linear generator and solenoid... that cycles the gas back to containment post vacuum chamber via small electric piston type air compressors. Also above the oil ring generators a multi path  material slip ring to then transfer , water, material / slurry, electricity and air pressure)

15. rotational transfer gear ( may be within a water tight lubricated casing )

17. Material slurry and water  sluce feed manifold ( the manifold is a different type of shaker ( solid bottom with

up water jets)  then also causing  water pressure jetting up ward ,  washing the material to knock the silt then into

transit bouncing  also with assistance of  water  jets into the high speed slide track then unto the conveyor....

just before the heating / drying system and subsequent vacuum system loading the concentrate into the flight deck.

34. Electric water jet assembly also with hydraulic drive system by fluid rate transference from the oil ring generator , via impeller differential and electromagnetic clutch to then drive a hydraulic pump that feeds hydraulic fluid pressure to number 34  then moving the ratio gear set's internal impeller in component 'HZ" as depicted upon the "oil jacker" drafting

at http://www.designdeskinc.com/oil-jacker.html then number 34 as component  "HZ".

mobiles ) as depicted upon http://www.designdeskinc.com/hover-motor.html  then to also contain flight navigation capacity and ability to unload payload Via vacuum system with internal agitation roller wheel system that churns the dirt to then be vacuumed and unloaded from the flight deck.

48. Material auger with water and supplemental injection system and sensor system to indicate impedance to the pulse reverse the auger to see if blockage will free itself... also then containing a logic circuit to cause all stop.

51. Material regulation system  limits vacuum intake so the flow pipe will not clog

52. Ballast water pressure pumping system tubes / pipes ( allows for upside down boat to flip itself over when one side of the upside down vessel then allows for the filling of water then also to cause the "Tilt" Keel to angle by hydraulic flow system to then correct the boat to the upright position

The oceans salinity and a sudden burst of CO2 could send the climate system into a tail spin very quickly... Volcanic activity in the past has also caused an abrupt greenhouse gas  increase in a very short time... The "shock absorber " then is at it's maximum and with a shallow "buffer zone"  this can yield conditions that cause a "run away" effect humanity is not prepared to deal with. The thermohaline ocean current is effected by salt water vs. fresh water and causes the ocean current to malfunction ...changing the oceans temperature possibly releasing the Methane

hydrate ( Methane ice),  then frozen under the water in certain locations due to ocean water temperature changing at depth.

Now global warming aside... the way we sustain the energy cycle is based upon a finite resource for 95 %  the way the worlds infrastructure powers itself Oil, Coal, and Natural gas ! After examining the trend directions regarding the energy density required to then transfer all other alternative energy design systems, "alternatives"  could not meet the

curve  ( time vs. rate ) with in the incline curve.

Mankind has figured out how to convert energy via burning fossil fuels or transferring electrons / photons sunlight into electricity or converting  effect of thermal energy then producing wind to cause mechanical motion to yield rotation to produce electrical energy via wind turbine.....  yet all of these forms  has a cost vs. implementation problem....regarding the energy density that is required to fulfill the function ( mobile application ) to cause a smooth transition into a different more stable economy.

Our design systems convert pressure into high density High Voltage electricity  production and yield electricity also on mobile platforms that meet the requirements to keep transportation functioning in a population heavy condition where transport, then being required for food , goods and services, is then met with a correct replacement.


The Methane  Hydrate problem  along with the farm fertilizer  run off problem ( Nitrites ) then filling the fisheries , killing the fish producing "dead zones" and unstable eco cycles, requires correction!

The following design is a multi use system then being able to dredge for gold in areas that contain the metal and the sale of the metal then used to pay for the systems implementation with great numbers to correct the massive square mile effected zones.

Trying to preform this function with a fuel based system is not economically possible... Who pay's for it?

So the mechanisms can cause multiple function to cause their implementation ... is the advanced dredge can also be used to fish... ( also safer for a fisherman ).

systems ... ( ie. so their jobs then become less hazardous fulfilling different functions...  within the same industries...).

The system may also be used to rebuild the Polar ice cap's thickness my mechanically distilling the sea water then mounting a snow blower  upon letter "q" with the water feed from under the ice. This could be done "Autonomously" via snow drone system.

The U.S.O. "rock truck design then may also be of assistance to clean the oceanic gyres that collect massive heavy nets and plastic trash. This is then advantageous for the health of marine life.


tandem rotating with the high side of the ratio gear set


with the tension pulley the tandem to a large oiled sprocket


system driving  a chain with adjustable tension rotating the high


29. water drive impeller and gearing  system 1:20 with the "20" then driving the compression pump ( transonic type )

The vacuum in number 12 exceeds the total  equivalent weight of slurry ( water and rock/ gravel at depth to vacuum the slurry also factoring the "gain" water to then move the rock / gravel then added by the water injection hydraulic pumping system using number 28.