Every year trees fall due to storm causing injury. The cost sometimes to pay an Abourist then being too much in stressed economic times also factoring the volume of maintenance with so many trees then effecting the power delivery system an alternative is presented.

The above design system uses liquid  nitrogen to remove trees at a distance with minimal labor and expense. Additionally to the design above an intake shield  ( screened hemisphere ) will then be atop the lift fan to then prevent tree leaves from impeding the lift fan's rotation.

The design system will also require horizontal force vectoring  due to the need to push and pullback quickly at times..so within the "avionics bay" the insertion of two "electric jets" will then also assist in positional stability then force vectoring in opposite directions. Quad ( sum of four) micro hover motors http://www.designdeskinc.com/hover-motor.html may be placed in lieu of the lift fan within the spherical positional mobile..then not requiring intake of air. The electric jets also may the be as hover motors in the horizontal position.

A vector discharge louvered ( variable positional ) within a rotational wheel ( motorized ),... will then allow for "tilt" stability when the system is in operation upon the electric jets http://www.designdeskinc.com/electric-jet-engine.html  (within the avionics bay and upon the flight deck between the spray arms),.. for "point lock" position due to the odd angles that the device will be required... this allows for correct operation resistance to counter act the push back effect of the electric hammer in operation..  Also then  the four electric jet engines mounted upon two independent rotational horizontal motorized mounting bracket systems for lateral flight vector changes.One set upon the avionics bay the other between the spray arms.

The spray arms may also then be resilient enough to then act as "hammers" to knock the limbs that have then had frozen sections to cause them to break.

For very thick limbs the design system will freeze layers ( ie . repeating the function by "program cut" to then guide itself around the "cut / break automatically" ), once started so the operator will not have to manually "fly" the design system and then apply the electric hammer to break off the frozen depth ( factoring position of the trimmer, for the trimmers safety , to then repeat until the limb is thin enough to be broken.

The nitrogen then can be harvested efficiently as well when using fuel less electricity. The "Tree Trimmer Drone" then being also a fuel less flight system containing a spherical positional mobile with a central balance system will cause the drone stable flight adjusting for the liquid nitrogen level.

The hull will then position in multiple positions allowing for correct positioning of the spray arms to then freeze the branch being trimmed , then once frozen the electric hammer will break the limb. Operators will then be required safety gear including full coveralls and safety glassed / hard hats....

The drone is radio controlled and has a limiter within the circuit to then only operate in close proximity to the transmitter with key code to the avionics. Horizontal force vectoring then by  combination  position of mobile servo positions  "motorized servo" also a thru bore electricity current transference ring.

The spray arms will also be able to pivot about their hinge point then connecting to the drone to allow for safety when hammering the tree branch causing it to break.  The spray arms will also widen the girth to allow for larger tree branches by electric motors and the required gearing. The electric "hammer" ( solenoid ) will also contain a liquid nitrogen spray head at the electric hammer's tip ( recessed ) to then act as a jack hammer for injecting the N2 into a "bore" hole fracture for better penetration of the liquid nitrogen.

Within the system only N2 ( nitrogen ) should be used as it is inert. An on site mobile N2 harvesting

system (  ie. as at the " rental store "  licensed operators ) may then fill the pressure bottles for on site dispensing.... at low cost...

A nice feature of this design is then the ability for small pieces of the tree to be brought down very gradually. The " Tree Trimmer Drone " then could act as wood chipper then also for the stump removal.

Optional - a lazer mapping system to scan the tree causing 3D immagning ( three dimensional imaging placed on the ground with reference sensor then upon the flight deck above the  electric hammer / references scan ) the tree into a database may allow the logic system to then automatically  trim the tree so the operator can just monitor the system  not having to then use the remote hand controls. This allows for safe removal as the flight system will also be able to auto dock to refill the liquid nitrogen then resume it's functioning. 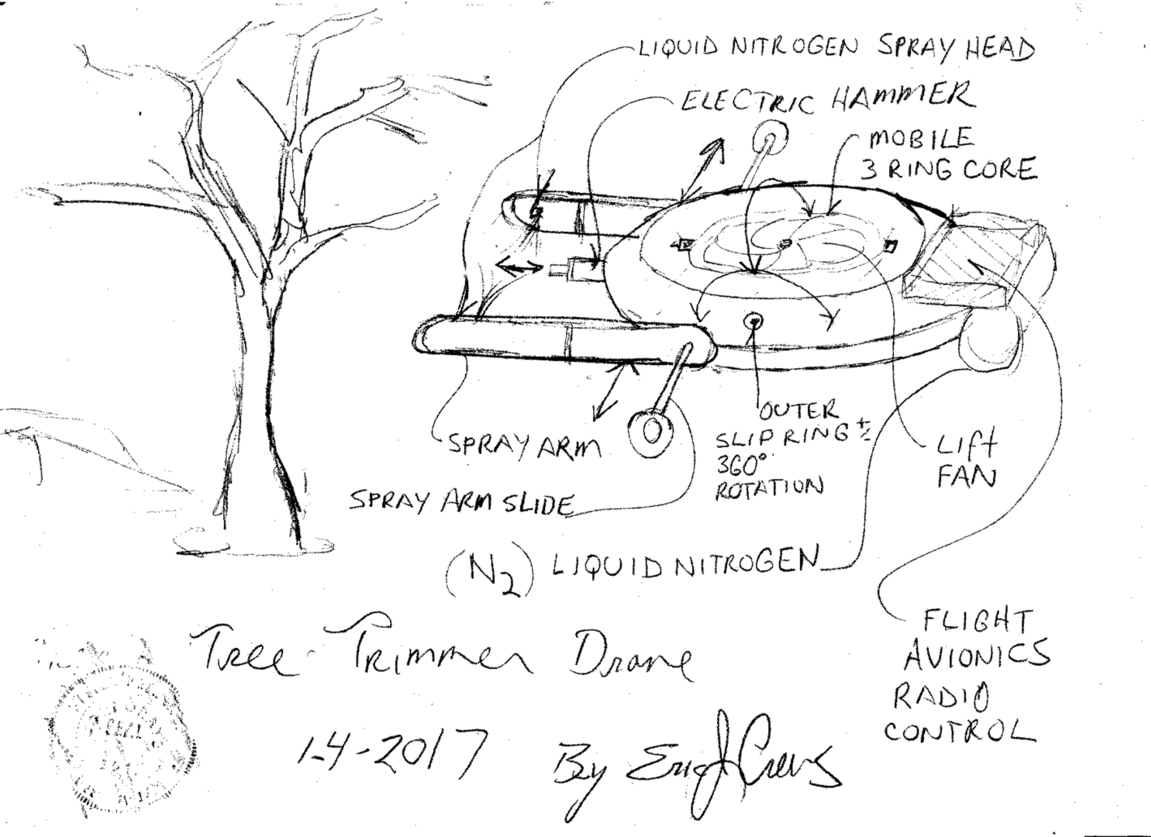