This design is intended to demonstrate that cycling pneumatic pressure can within a sealed vessel cause lift of a heavier than air object. The idea here is to cause negative pressure between the inner and outer hull of the design system to then force vector the high pressure caused with the inner hull to then discharge and lift with zero intake or out flow from the vehicle.

The system requires a battery and external pneumatic pressurization and a hydraulic oil fill.  Depicted at the top of the drafting are types of shapes that can be implemented...the logic goes that if you can sustain a higher pressure within the inner pressure container (listed as C) By pulling the air pressure into the chamber on a fuel less self sustained platform then vector the  discharge against the pull of gravity it will lift the inner pressure container and the outer pressure retainer (listed as B).

The diagram below shows "A" listed as the section set of compounding thrusters they vent the inner pressure chamber and generate electricity that then charges the battery and provides for increase speed for the lifter to operate.  Depending on the application multiple numbers of discharge jets (listed as A) can be added to comply with modification of the design requirement and also to increase lifting capacity. as an augmentation hydraulic fluid max pressure safety by pass flow line will be inserted before each hydraulic impeller for discharge jets listed as "A' and will dump to the hydraulic tank. Also a max hydraulic safety pressure valve will be inserted before the hydraulic impeller number 4 driving the differential with return line to the hydraulic pressure tank. In the drafting  "B" is the outer pressure containment vessel and will be pressurized to the highest safe level that the material selection will allow. There will also be installed a main line hydraulic flow "throttle valve" to control the rate of hydraulic fluid into the discharge jets "A" with a flow dump tube that also cycles back to the hydraulic storage tank. The "throttle valve" is controlled by electric valve and safety cable manual shut off  causing the bypass high speed fluid to return to the tank.

The guidance system for this type of lifter is radio controlled or by command cord with remote. You might be able to put a swing on it and glide around..:)....The horizontal vector control is produced by rotating number 18 causing a directional tilt...wear a helmet..haha... It will be possible to augment horizontal speed with the addition of electro- static compression propulsion or electric jet engine, also zero intake force vectoring motivation systems called arc jets like ion engines but sealed gas systems. The horizontal vector systems can be mounted fixed or on rotational platform to increase agility. The screen is a heavy gold color mesh. The vector discharge jets are encased with containment sleeve *not depicted* to channel the flow and the jets are spread out to evenly lift the vessel about 360 degrees.

The transonic compression fan is also circular ..just to clarify.

The battery starts the system then the active generation by generating dynamos then replaces the current and the system becomes self sustained.

For larger models the louvers in number 24 will be able to change pitch angle by hydraulic system attached to control bar. *note on louvers they spring shut and can be all the way across the directional rotating disk.

Also in order to increase aero dynamic flow and re-cycling the vector discharge system"A" may vector into port attached to "B" that channels by tube  the pressurized velocity outside the pressure container "B" into the top of "B". The base vector port will be slightly elongated to allow the pressure discharge a greater length before turning to return to the top of "B". These return pipes will be referred to as the "legs" because they will shape like a stand for the mechanism.

As an augmentation an additional low pressure pump will be added to the center of the base of the mechanism with the vacuum intake from beneath the mechanism from each leg tube before the directional bend to return to the top of "B"and the vacuum will vent into the center chamber "C".  This reduces the areo dynamic slam and allows the cycle to preform correctly. The vacuum pump is is the same as the electric discharge jet "A" (single jet) with the hydraulic impeller and number 24  omitted and the generator becomes then the drive motor with the pneumatic velocity discharge becoming an accelerator by impaling the transonic impeller driving the ratio. gear set.

The same flow system "schematic" can be adapted to tube form with the hydraulic / pneumatic pressure tank adjacent to the "tube" form schematic. This "tube form" will then be mounted for multi directional force vectoring./horizontal flight..even spider format (eight legs) is possible

System design can be implemented for asteroid orbital correction to prevent earth impact. Asteroid mitigation... and or then carry fuel less de-humidification equipment for agricultural watering  / forest fire suppression and or to then cause super cold air  by nitrogen cooling system surrounding tornado to counteract the updraft reducing the rotation and lessening the destructive effect of out of control atmospheric conditions.  ( not to be used within tornado. ).

If used to cause a storm cloud to rain out exterior vector displacement connect a tube then mixing with cold air... vectoring through the tube downward... ( additional air pumps like Hot Light html..... with super cooler venting into the tube  ...tube vents close to the ground...8' - 15' above the ground  flexible fabric tube) 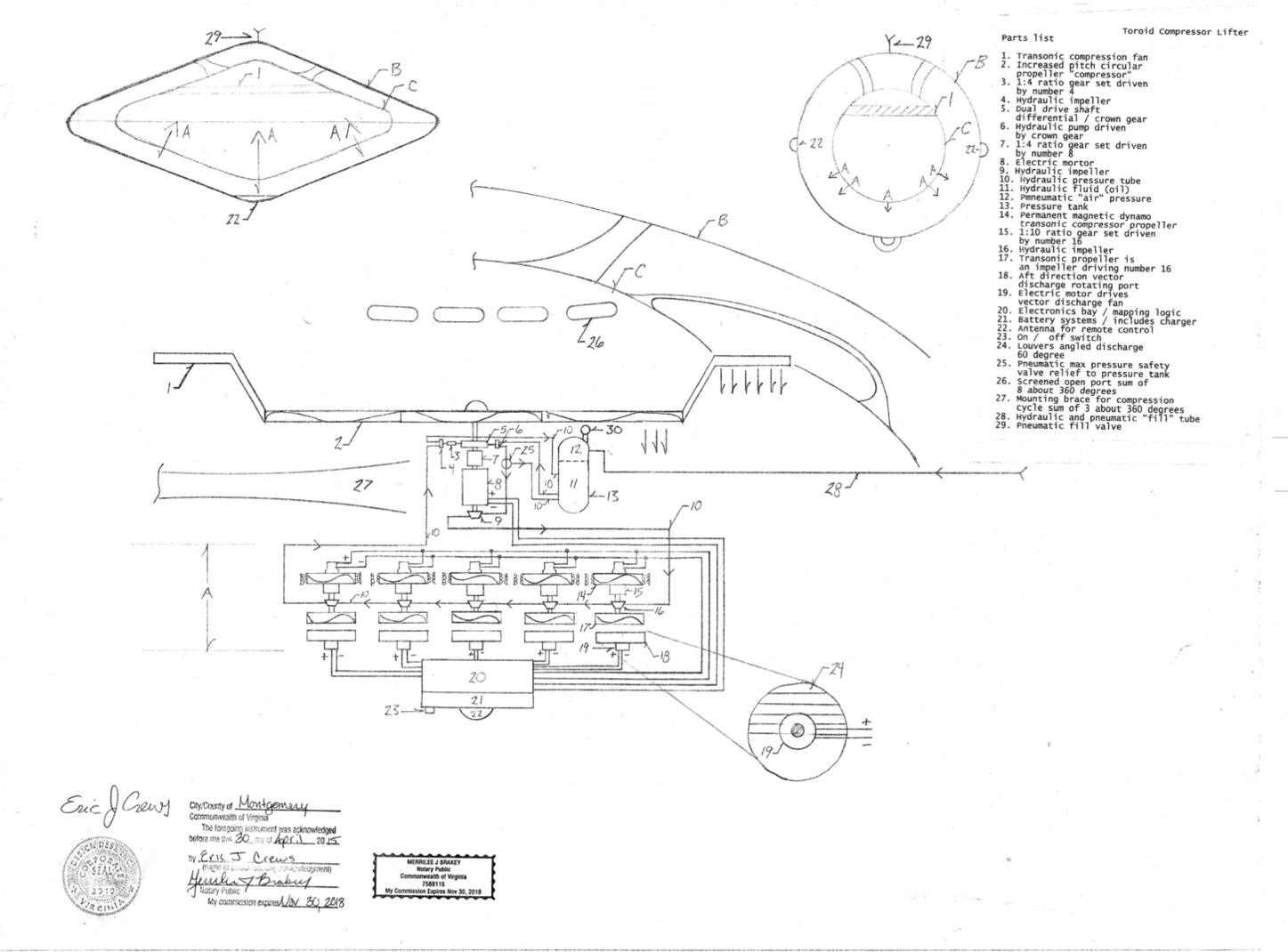