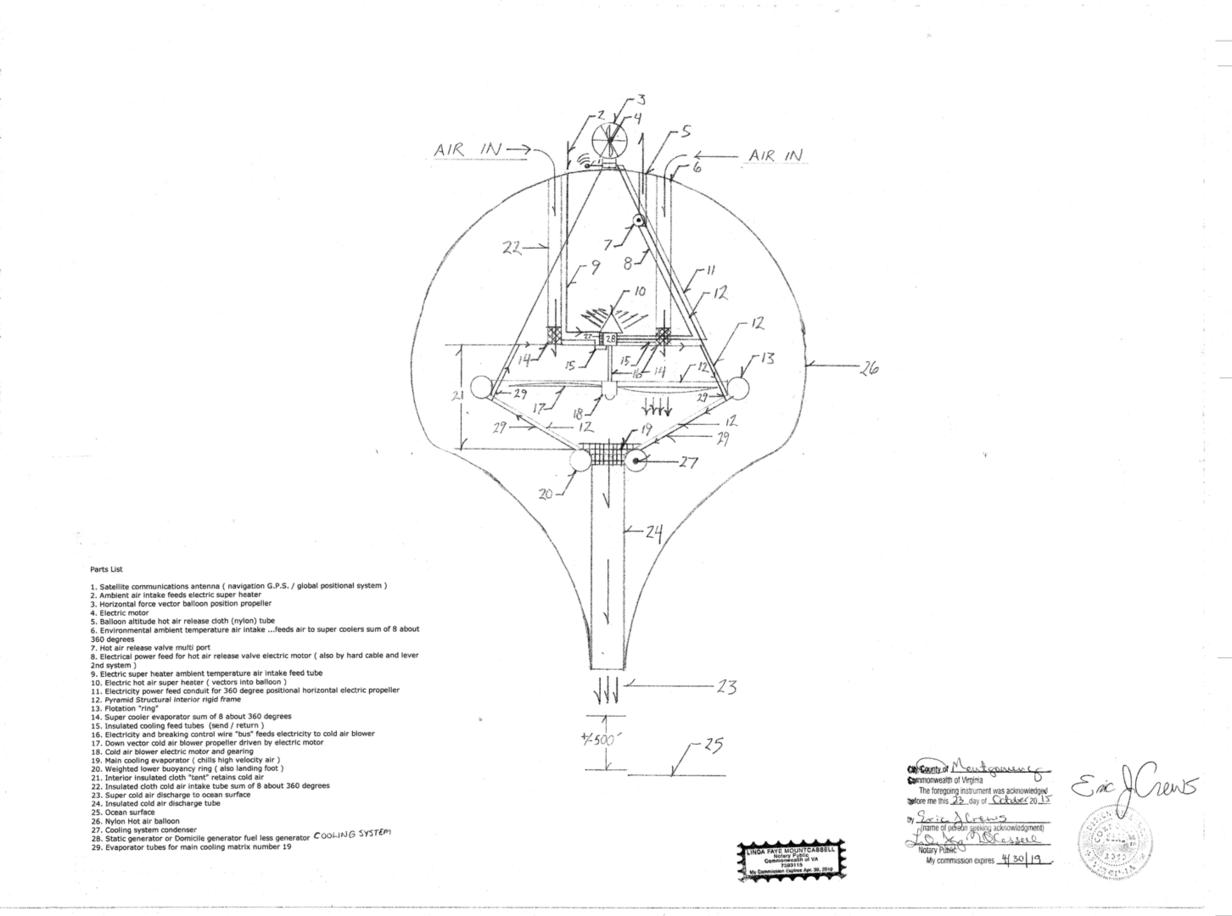 Every year we have massive injury loss of property due to typhoon / hurricanes...the following design system is intended to chill the Ocean surface temperature via a fuel less hot air balloon to then effect the storms formation by counteracting the thermal up draft that increases the storms intensity that causes greater intensity and damage from the storm.

The effective operational cooling area will be determined by the final size of the balloon....It may take multiple balloons 500 - 1,000..etc.. with tube discharge to the vent atop the ocean at 20' this prevents coiling turbulence....

altitude ( 10' - 500' ) and will discharge cold air at great volume to prevent the thermal updraft that increases the hurricane by cooling the oceans surface.... The satellite navigation system will update and maintain course corrections as required to continue to cool the oceans surface in front of the storm  to lessen the impact of on coming hurricane or typhoon events. Be cautious not to cause tornadic flow correct height for condition will be determined by environmental conditions ie. air pressure temperature...  humidity etc....

* Note - Number 3 rotates about 360 degrees and can also be modified with full sphere vector discharge  positioning.

* Note - Number 27 along the landing foot number 20, will  be atop  number 20 exposed upon the top half of the toroid.

* Note -  The design will then be weighted correctly to self  rectify if it crashes into the water.

* Note -  Number 10 will contain redundant circuit pathways to also then have multiple heating elements...to then continue operation if a single   circuit fails. Sum of 4 independent pathways of operation.

* Note - In case of lightning strike the electronics will be contained within a Faraday cage.

* Note - This system may be any balloon shape... " hot air - Zeppelin " also to deal with atmospheric disturbances such as that can be produced from volcano
( sulfur dioxide cleaning with addition of " Gallon Jug" design http://designdeskinc.com/Gallon_Jug.html ) to then be able to aid in space flight to then
Terraform planetary objects like sucking the Co2 (Carbon Dioxide ) off of Venus and sending it to Mars to then stable two additional planets
and heal the Earff....Electrical power can then be used to microwave Mars core to re start the magnetic field to then allow Mars to retain the atmosphere...

* Note - Also as an addition a " De-humidification Ring "  ( humidity in the air changed into water ) to allow for water harvest from the air to then discharge
from the "ring" to water arid land and or farm   crops, can then be suspended form the balloon. The dehumidifier will then be electric powered by the excess
electricity produced from the Static generator. De-humidification Ring cable connectors then attached to number 13 within the
balloon and emanate to the exterior of the balloon and extend until the balloons discharge has 2' clearance between the Dehumidification Ring and the balloon.
A pneumatic compressor will pressurize the "sprinkler chamber" where the water will discharge unto the farm crop. ( may also work as a low cost forest fire suppression system).

Also in addition to the de-humidification ring another water tank toroid will also be able to be carried...for agricultural watering....( we will require no pesticides used
upon the crops if the system is used and will suggest natural methods of pest control ...the water tank toroid will also be equipped with an automatic
water souable plant food injector system to mix with the water  for happier plants and have an automatic water filling system to auto fill the water tank from pond or
sealed   container then filled by the bio tank design. Also the water from the cooling system will channel into the water tank and or into the
pneumatically pressurized  sprinkler system upon the De-humidification ring.

Ever been in the desert and seen a cloud and wondered why it doesn't rain?  These systems can fix that.... Desert blooms.... :)  ( cooling system ie. high volume discharge cold air....for over ocean use....the de-humidification "ring" may be used to lessen thunderhead over land storm formations....so that storms are less severe. The cold down draft effect should not be used in thunderhead clouds as the down draft could produce tornadic  activity.

It would be better to shrink the storm clouds before the reach such capacity by forcing the water out of the clouds by the de-humidification ring. If in serious situation a wind sock "tube" then may rain out the clouds via dehumidification but the discharge cold moist humid air must be caused in the final 2' of the down tube to only emit water and always less than 4' above the surface of the ground . A fuel less electric drone may adjust the base of the wind sock to keep it from collision with obstacles. This should avoid any tornadic formation.

The cold air down draft effect may also be used over land above corps where the temperature is to high for agriculture but not within storm clouds.

This system as described is an attractive product for agriculture and the final sale price of the mechanism per acre of water coverage is the far under current irrigation
systems....ie.  drip irrigation , center pivot etc. cost..... and you would not have to pay for the