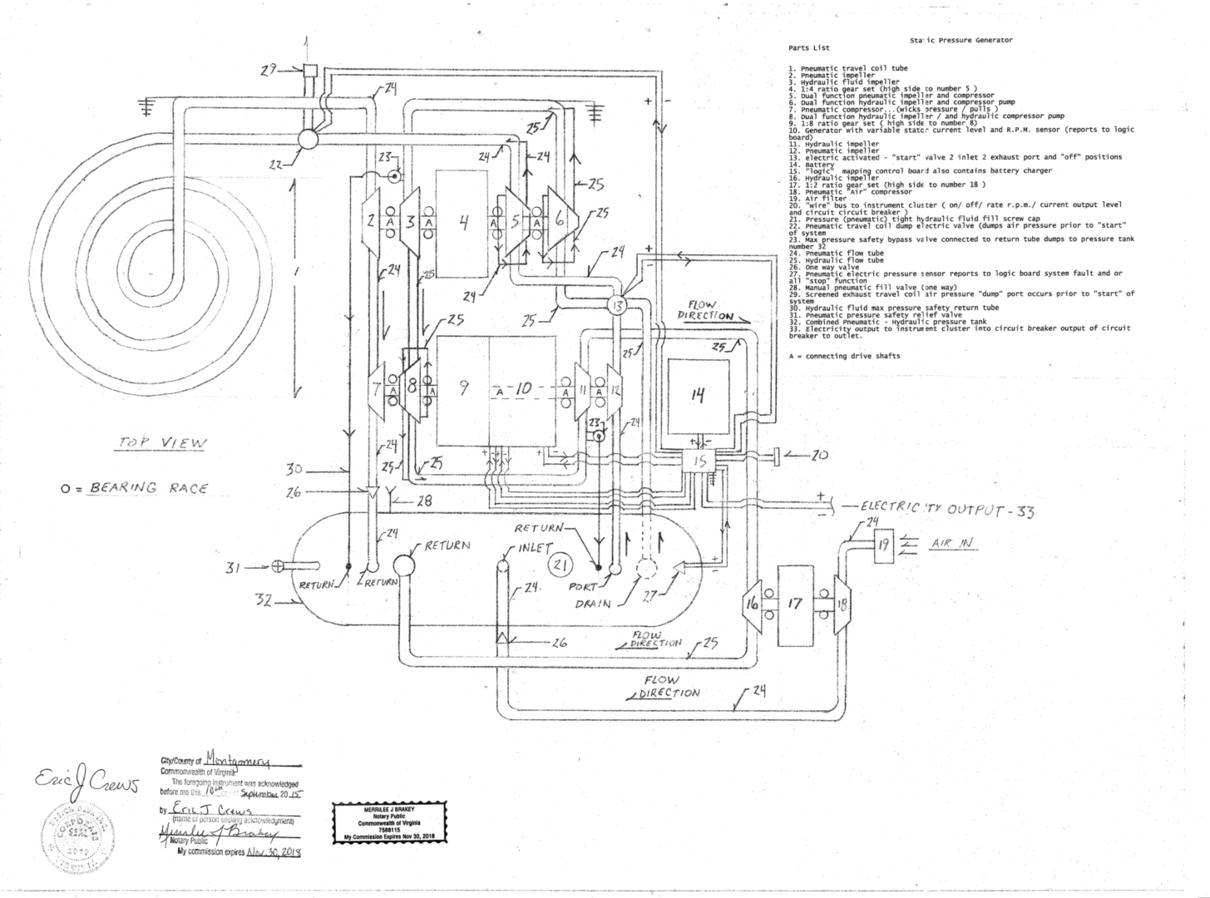 The Static generator is a pressure cycle that drafts itself forward producing fuel less electricity. The scope of the scale of the mechanism is vast and  is scalable ..ie... will work for many applications.

This system will demonstrate that an unlimited supply of clean electrical current can be attained from a fixed pressure rating. The current density "intensity level"  though is restricted by material selection.

After viewing information about oceanic anoxic events ,,,( ie. acidification of the ocean / due in part to increased carbon dioxide in the atmosphere ) I drafted this design to also then provide an active air motion system that can process the Co2 out of the atmosphere with the addition of the Amine system listed within http://designdeskinc.com/open_flow__automobile.html. Air flow processed post number 31. The modification to the automotive product would then drive generators  at drive shaft shafts to  power freezers to freeze the Co2 into a solid and confine it under insulated coating within a controlled environment. The ability to correct the problem with this design , atmospheric Co2, is then a cost effective "Active" ! , method and can remain in service  at no additional expenditure until correct Co2 levels can be attained.  It will also work to air condition Urban outdoor environments and or remove particulates from environmental spaces and provide electricity to power buildings independently of the centralized utility electrical grid. Making it a product that saves money pays for itself and frees the installation operator of the required residual payment for energy. This can be critical in some instances in the event of natural disasters implemented the independent systems  then for Hospitals and or communication systems.

The system depicted is a Dc (direct current ) system with compounding wound field coil within the stator / field coil in number 10. Number 10 also then be modified to produce Ac (alternating current ) with an addition of a magneto and Dc to Ac current inverter in number 15.  This caused the cost of manufacture to drop..

Numbers 4 and number 9 will or can also contain electric drive motors on the high side of the ratio gear set. this will aid in acceleration of system also increasing the rotational force able to be applied to then yield more electricity output. the current is produced within number 10 and used re directed / compounding " increasing" according to electrical load requirement but controlled in number 15...

*note*  the hydraulic impellers may also act as compressor  by the pitch design of the "fin" of the impeller. This is so that when an increased rotational pressure is placed upon the input of the impeller it will act as an accelerator.  In the design below the dual function impeller / compressor has a secondary injection system for both hydraulic and pneumatic flow paths...this will also increase pressure yielding greater force by the effect of  adhesion of flow mass then injected creating spirals within the flow.

Field coil intensity in number 10 acts like a "breaking" mechanism to slow the system then producing more electricity ..as an option a toriod magnetic confinement capacitor may be added to the system to assist in the "breaking" function by allowing very high levels of current to slow the armature of number 10 for very short time periods by increasing the magnetic field coil intensity the Stator / field coil of number 10..

To prevent excessive "run away " effect number 22 will also be constructed to allow pressure to escape during operation ...venting out of number 29.  If the electromagnetic clutch will then slip in numbers 17 ,9 and number 4 a safe stable rate can be attained.  When gear system "locked" by the electromagnetic clutches a out of control effect can become hazardous, the system must be allowed to slip. The Stator / field coil in number 10 will also be adjustable and number 10 may also incorporate a magneto ( to then cause number 10 to become a permanent magnetic generator.) so please be careful the centrifugal / centripetal  warpage due to high rate of rotation must be calculated to then cause the correct material selection for speed of system determined by application.

As a safety feature double redundant pressure sensors that report to the logic board will be installed within the max pressure safety valves to control rate velocity and adjust the system speed.

The system is wasting energy so at that point the oil discharge from number 23 on flow tube intake number 3 will then be ( as augmentation  to the design ) channeled through a hydraulic impeller connected to the high side of a 1:8 ratio gear set ..with the low side of the gear set then as hydraulic impeller (with entry port also containing max pressure safety relief valve with discharge tube to the combined hydraulic oil and pneumatic pressure tank then feeding hydraulic oil post hydraulic impeller on the high side of the gear set ), electric motor "G" , and "main"line" pump ( the main line pump can act a flood correction pump and or "sealed closed loop"  Hydrodynamic generator (  Oil ) impeller turbine connected to High Voltage generator systems for high density production of Utility scale electricity production). the additional electric motor ( "G" ) will then be powered by number 10's electrical discharge. Multiple "Static generators connected to the "turbine" will provide the required force to convert into High tension electricity.

The system should use a light weight oil ... ( silicone oil ) that is non flammable and electrically non conductive.

The system will re-pack pneumatic pressure at greater rate per unit of time than it's displacing with the fluid / oil then also returning to the confinement to then again cycle.