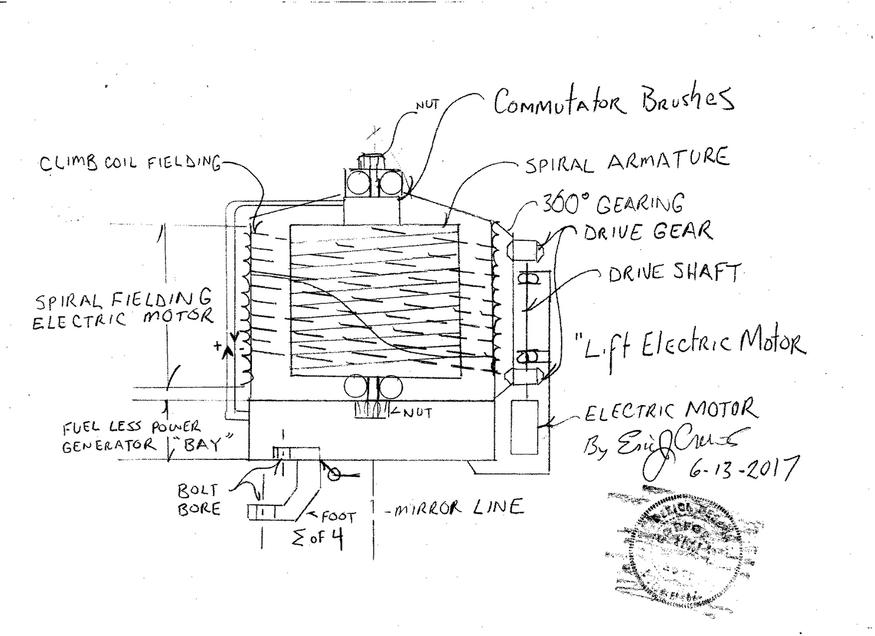 The following electric motor design is intended by counter rotating wound magnetic fielding to cause  lift by magnetic repulsion thus causing a cause directional lift by spiral wound fielding. The commutator also contains an internal electric motor then connected to the with the rotational output then tandem rotating with the spiral armature.

The design system then having a polar array 4 times about the center point / mirror  line  for the climb field coil also then having four feet ( base mounts ). The climb coil fielding then also electrified by the  fuel less generator and governed control electronics within the electronics bay. The design is intended for navigation course correction in space (zero gravity) for vessels minute adjustments... the wiring the will allow for adjust in both horizontal spin directions.

The advanced electric motor system then will also be able to increase it's internal cooling due to the armature frame then also acting as a blower fan to then move air through the internal of the electric motor. The end as of the system then vented but may be sealed to then cycle a cooling inert Noble gas such as Argon.

The electric motor's end ports ( both sides ) may then also cause air thrust allowing for safety in flight as an emergency  air craft hover electric jet.