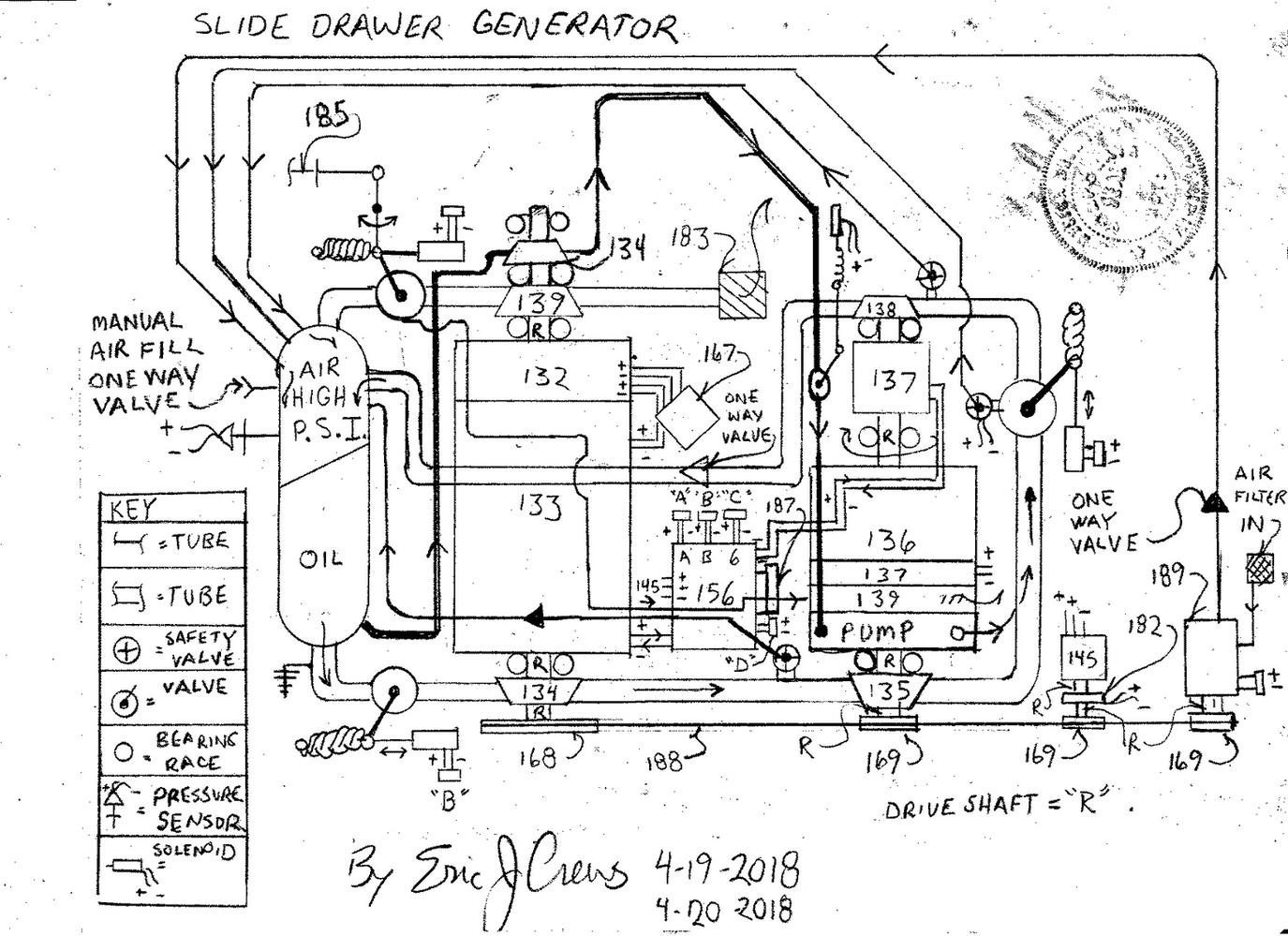 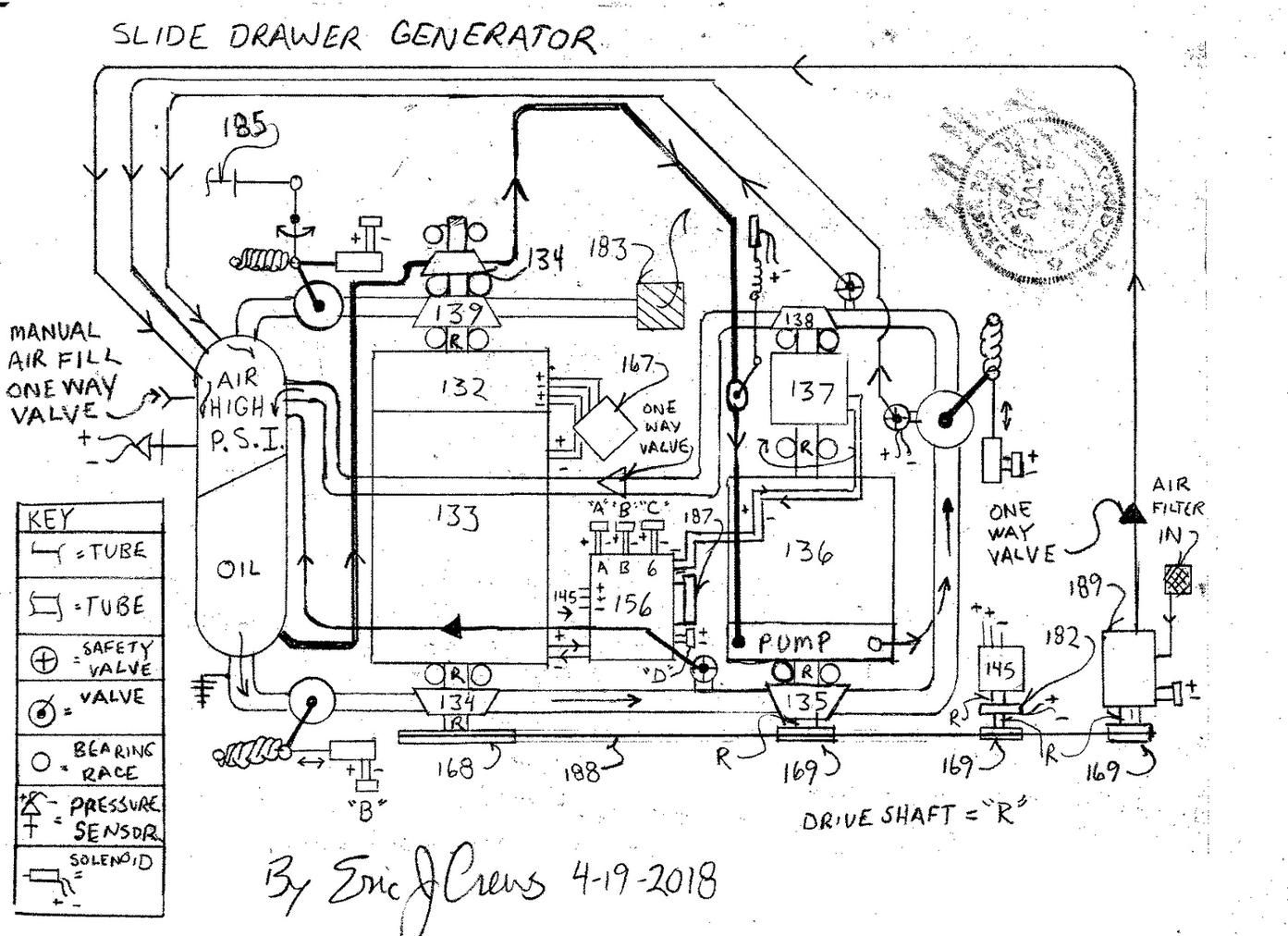 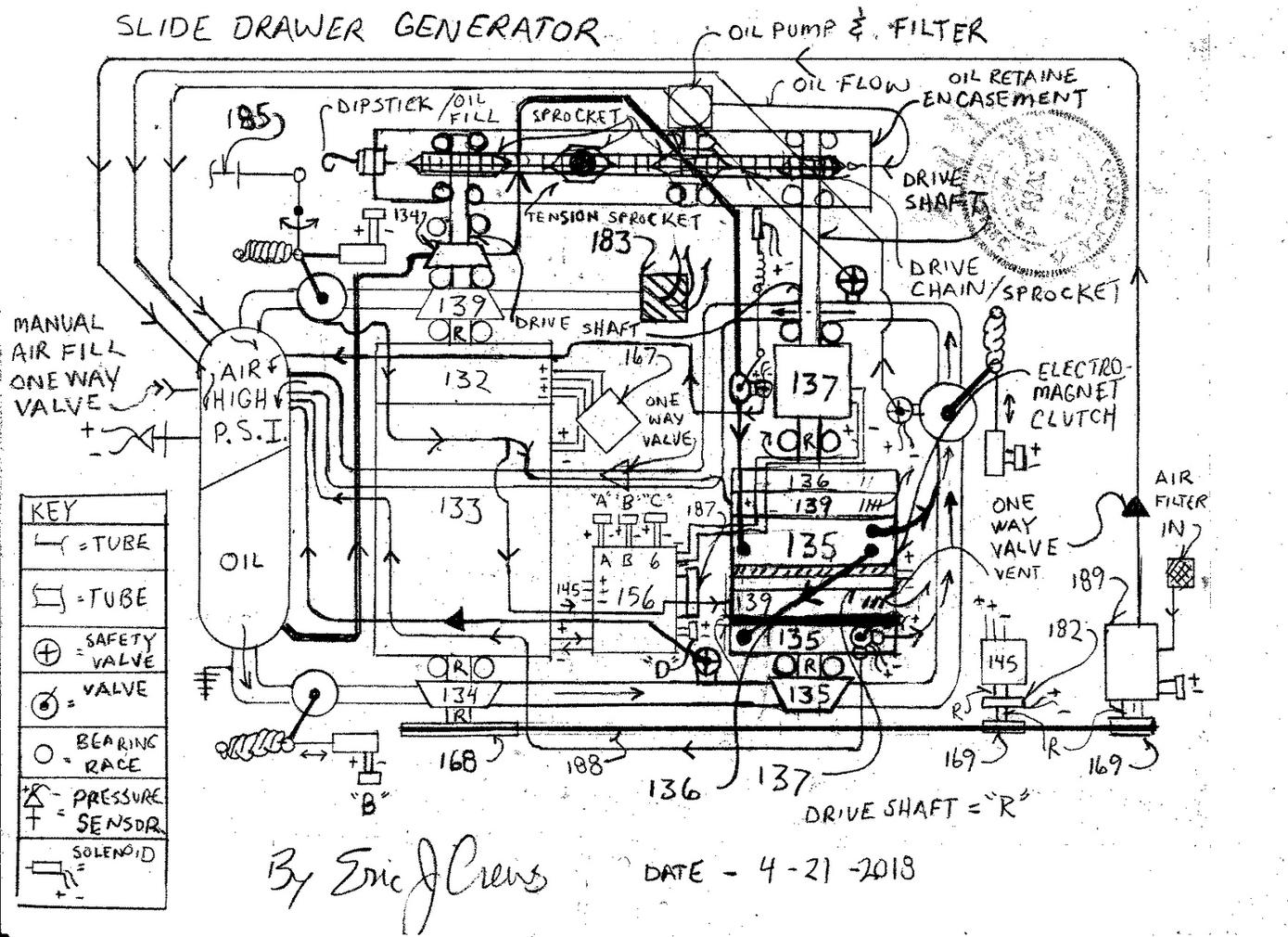 137. electric motor (may contain an electromagnetic clutch upon one side of the armature's shaft of

control circuits to then govern the speed of the system to "maintain" safe operating parameter.

189. centrifugal air compressor with electric clutch ( does not operate all the time), to then

The above fuel less generator will assist in global reduction of greenhouse gases that contribute to global warming. The oil within the system is a silicone oil that is non electrically conductive and non flammable.

The design then causing volt regulated electricity "re-dump" / "re- introduction" from the main high voltage generator to the two electric motors within the system ( number 137), to then yield an excess of electrical current produced by number 133, then able to be applied to multiple external system application.  The electronics  within number 156, then regulate the electricity current level allowing to motors to speed up for continual sustained operation.

The electro-magnetic clutch then just by magnetism two magnetic plates with attracting magnets to cause tandem rotation. This type of clutch will not require frequent replacement as the only "wear" upon the clutch will be the bearings and electrical contact points ( brushes). When heave "load" is demanded from number 133.. electricity current levels are then increased to numbers 137 ( both electric motors to then cause total system incline speed rate to then become "load reactive".

The R.P.M. sensor then sending information to the electronics regulate total systems speed by allowing the oil flow restriction valves to open or restrict oil flow.  The "Start" cycle then allowing stored air pressure to be directed to the two pneumatic impellers numbers, 139. The oil flow valves the able to be positioned  automatically by extrapolating the sensor system detecting oil pressure or the safety valves position.

The permanent magnet magneto then will produce electricity to electrify the field coil within the main high voltage generator then being voltage regulated.  The main high voltage generator then connected to the main electronics "circuit board" ( number 156 ). Within the electronics "mapping" system the designs circuits control speed current level  sensor system to extrapolate safe operating parameter and correct functioning. The variable electricity produced then channeled via wires to both number 137 ( electric motors) to then cause speed incline upon the oil "hydraulic draft" assembly.

By number 135 at greater rate than number 134 the resistance produced by the field coil / stator within the main high voltage generator is subsequently nullified. The base pneumatic pressure then greater than the total resistance produced by the ratio gear sets mechanical resistance. During the system operation the ratio gear set's mechanical resistance is also then nullified by the electric motors feed electricity causing an "electric counter tilt" effect to then allow for systems speed incline producing more electricity.

Excess electricity out put  receptacle  then within number 156. The systems sensors and oil flow valves then connected to the electronics control board, number 156 to regulate the system.

The voltage regulator also with an arc static electricity dissipation system with actuation indication and fault indicator to also then cause a systems all stop as a safety feature. The movement of mass causes electrical charge "static electricity" so the phenom must be addressed within the design system.

Number 167 is also with an "arc dissipator" then able to direct the system resultant static electricity "charge" into a chamber with inert Noble gas (Argon) to then arc across spark nodes with in the inert gas and electrify an internal transformer ( redundant sum of two) that also will direct the static electricity "harvest" to use in the system such as an electric motor connected to a blower fan causing heating or cooling for the mechanism with attached propeller. The out flow from the transformers are also voltage regulated / contains fault indicator for the circuit and with non electrically conductive surface material. The exterior of the flow pipes are  electrically grounded and electrically insulated then surrounded by a safety "shock casing " to prevent injury from component failure. 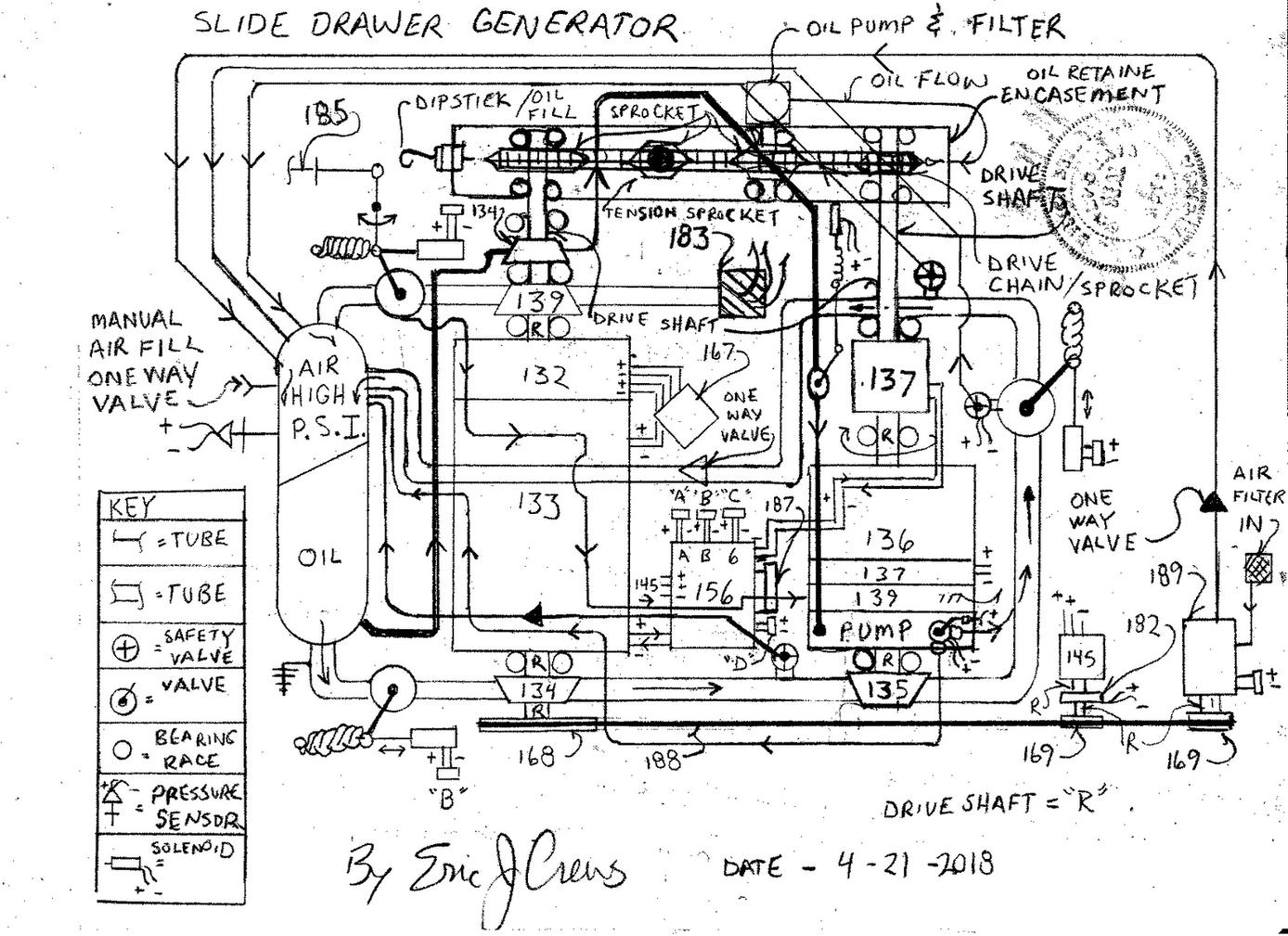