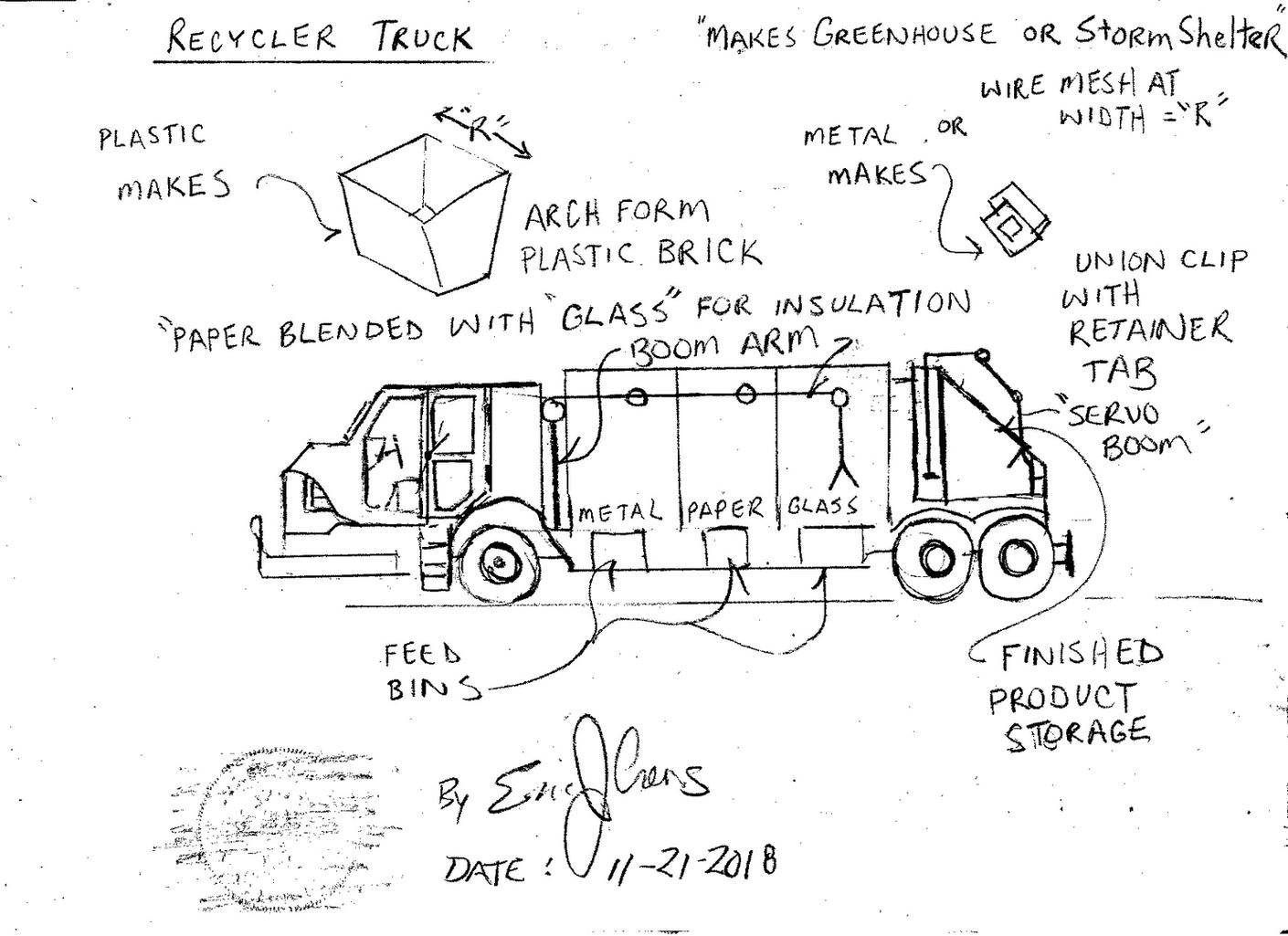 The following design concept is then intended to return to the  purchaser of the material then being a recycled plastic building product to assist in safety. The truck collects the sorted recycling to then reimburse the homeowner, or person who collected the recycling material,  with a finished building component in return for using the recycling service.

The system also will work for tool sheds garage or  workshop. The entire process is powered by fuel less generators including the trucks motive power using  the cross pump generator listed at http://www.designdeskinc.com/cross-pump-generator.html

The design can be payed for by using the savings if the generator is used for city buses. The savings then applied to construction / purchase of the design system using municipal bus tokens to then assist in increasing the application's numbers reducing homelessness.

The Arch cover brick housing design then may be used also to arch cover house trailers with earth cover, to protect them from high velocity atmospheric advent like hurricane or tornado. The "Long Arch" type  envelope then with multiple egress and Arctic entry to then reduce the electrical loading making the system safer to heat if the space between the long arch and the trailer is heated slightly.  This causes a lower "work duty" for heaters within the interior of the house trailer.

The dome type system with earth cover above an existing dwelling then acts as a fire barrier and or inclement weather protection shield from high capacity weather advent like hurricane or tornado. In flood prone regions an  "internal dome mote" will be equipped with high capacity water filtration and pumping.May act as a aquaculture system for food production. The mote then about the interior circumference of the dome. The view from the altered home structure can be replicated by camera an video display upon the windows as not to alter how the home feels.

The assembly for the dome type is the same for the arch systems. The "housing system" then connected in interlinked arches and filled with the insulation mass made from the recycled plastics connected with a locking security clip. The design then as a civic function will assist in housing for the homeless in a cost effective manor due to the fuel less collection of recycling. The truck and material process of forming the "open face" "tapered bricks" then a zero cost system minus the operators labor cost / insurance.

A "dug in" foundation is not required for the "arch dwelling" or dome dwelling as a housing method due to the fact it will be earth fill covered post plastic wrapping and concrete deposition to then cause the exterior to shed water... saves money regarding the cost of construction.

The interior floor span then stabilized by placing the "brick block" upon the ground with the larger  "open end" upward then sinking a securing pin "stainless steel rod" through the block into the earth at sufficient depth to then prevent heave (under the "frost line").

The line of "base blocks " then connected by securing clips, filled with concrete to form a rigid perimeter. The base block is then connected to the "arch brick block" through the open slot upon the small end of the arch brick block via base connector (bolt and lock nut). The arch block is then with open face of the brick facing outward. The first two arch block  "block run" ( vertical stacking ), are then fastened to the base block before the concrete is poured into the base block perimeter.

The base blocks are then covered with wire mesh causing a continual tie between all the  "base bricks with the wire mesh then also being pushed into the open end of the base brick to inter lock the base bricks a bit.  The assembly then filled with fiber reinforced concrete and allowed to cure before the arch or dome  is assembled.

Thin shell wire grid reinforced stucco and or concrete can be applied to the outer "top" of the arch or the interior surface. This assist in fire resistance and adds to the total systems structural integrity. The securing clip then inserted into a slot at the base of the "flower pot" with the open end facing upward to then retain the wire grid as is is secured to the surfaces. The concrete is water proofed with a sealant before earth cover is placed atop the exterior concrete.

Upon the outer clip union by the securing clip the tab that retains the "bricks" together then is bent to then retain the wire grid as it is placed atop the arch. The top wire grid clip is in addition to the brick locking clips and is atop the water proof plastic.  The plastic is not punctured the clip retainer is folded downward to then cause the plastic's water proof integrity. The wire grid the lap places so that each width covers one half of the "brick / flower pot" to the cause continual knit when the wire grid is wire twist tied together. This forms continuous knit to accept the concrete.

To form "rise wall" two brick are then placed together in "opposite direction", clipped and shimmed for "tilt" with mortar fill until vertical alignment is attained. This allows for doors and windows where required. The exterior facade then a fire proof stone or concrete / stucco with fire proof doors. The rise wall then lock to the inner curve of the arch. Since mobile house trailers move the wall can be made to become unfastened allowing egress to extract the house trailer without disturbing the over head arch.

For greenhouses the "open span" then caused between the arches, is then stabilized with a "cross tie" also formed from the recycled material secured with  "cross tie" securing pins. The cross ties are then attached to the outer surface locking the vertical alignment  "so that the arch stays plumb".  The "cross ties" are formed so that they clip unto the edge of the open face side wall of the arch brick with a terminal end built in clip recess then are secured  "pined" into position. The outer face of the "cross tie" then also containing a plastic retainer port to then be covered with plastic and punctured with the plastic plug clip to then lock twist into secured position retaining the plastic in a water tight fashion.

A sliding temporary "ply wood arch" that acts as a "slide form" may assist in the assembly process to then give a bit of stability when forming the arches. The "slide arch" then is under the arch brick assembly, allows for a bit more total stability when forming the connected arch. When this is occurring the total system is applied when the system is being filled (insulation) wire mesh installed and plastic and concrete top coated in arch assemblies of  three to four  total arch at a time so that the total construction is a continual process before the slide form arch is moved.

The cure time, temperature and relative humidity are a factors when constructing the system to ensure continual concreted bond when depositing the concrete.  A "fast" repositioning of the plywood arch "slide form" in it's  "new placement position" is required.

To keep the total system to municipal building  "code" multiple egress must be installed allowing for multiple entry and exit. Utility service installation the being water sewage and electricity will require locking vertical stable stud walls to then be secured to the vertical walls upon the arch ends.