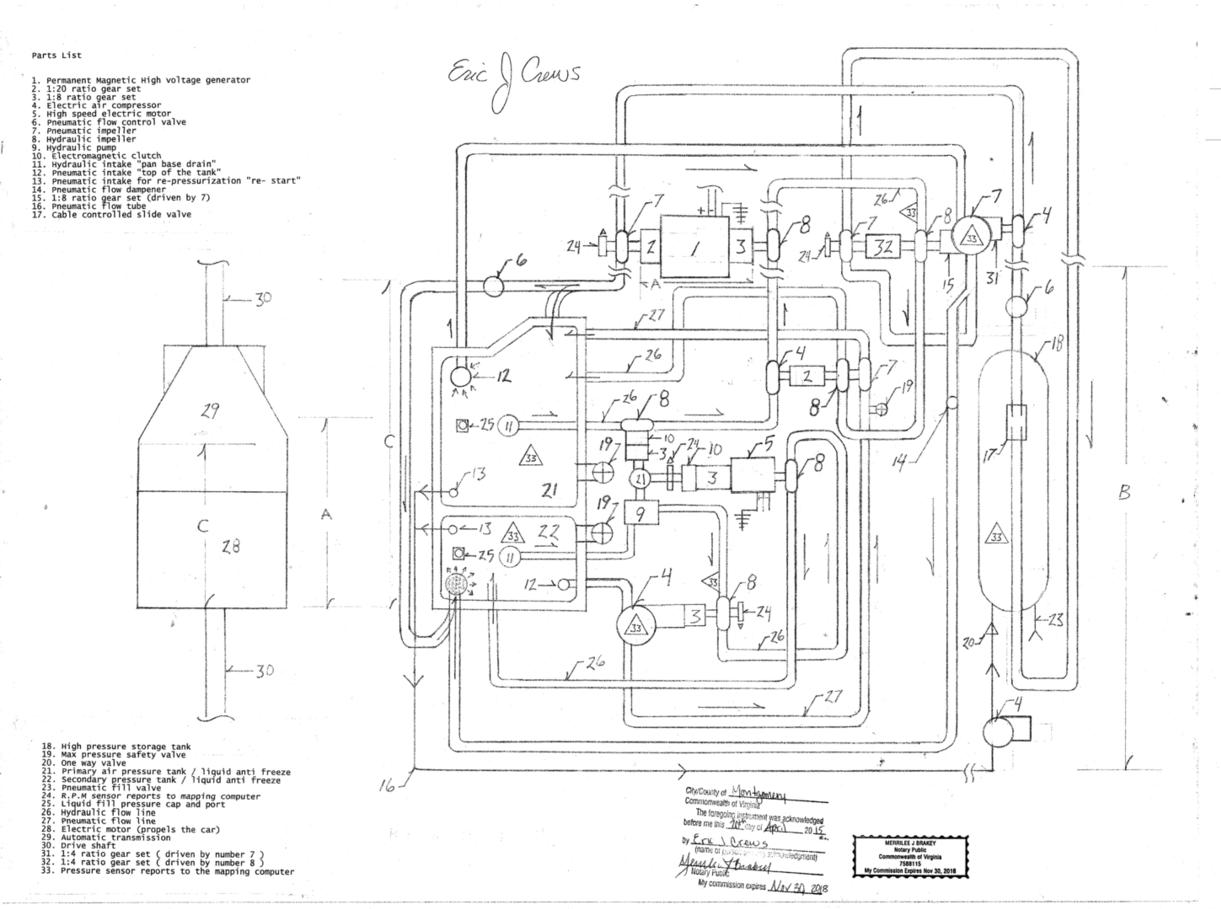 This pressure cycle is intended to demonstrate that constant "pressure" can produce constant electrical current. The application depicted is a self sustained electric car but the design can also be applied to many different implementations.  Because of the compounding pneumatic compressor this may be a good design for the "sealed hover craft" using electric jet engines to cause the sealed force vectoring. It could float a disk sustained on air pressure...for lifting where zero air intake is required.  (reference aero space on this site) *note the generator and compressor components would then be made of light weight material such as carbon graphite / carbon carbon.composites.

Once the system is pressurized via number 23 with number 17 in the closed position the system is then ready to start. Number 17 is opened and allows pneumatic pressure to pressurize the system lines. The discharge velocity then impales number 4 causing compounding rate  of the pneumatic flow.

The pneumatic discharge the post compounding pneumatic compressor then impales an impeller connected to a 1:20 ratio gear set causing production of current in the permanent magnetic high voltage generator number 1 . This action is the tilting the 1:8 ratio gear set driven by hydraulic flow.

The rotation in the differential is then "tilting" the draft impeller for hydraulic fluid out of the primary Air / Water anti freeze pressure tank.  The hydraulic discharge from the secondary air / water pressure tank id then pumping at high velocity   impaling the impeller at high velocity that drives the ratio gear set rotating the pneumatic compressor that then exits the pneumatic compressor and impales the transfer assembly to then return to the primary pressure tank.

The transfer assembly is then accelerating the pumping velocity to the hydraulic impeller number 8 on the wet side of the permanent magnetic high voltage generator. The hydraulic fluid then discharges from the generator assembly and impaled an impeller with in the compounding pneumatic compressor...this action while running causes the impeller to also compress and increase hydraulic fluid velocity. The high speed fluid then returns to the transfer assembly on the low side of the ratio gear set then returning to the primary air / water pressure tank. The system is able to compound in speed with velocity with the pneumatic pressure reduced by the active refilling of the pneumatic high pressure tank with the slide valve number 17 in the closed position.
correction to the drafting below the transfer assembly 4287 should be listed as 9287.  The drive side of the 1:20 ratio gear set is both pneumatic velocity and hydraulic fluid. Nobody's perfect...
The excess electrical current then powers the electric jet engine for sealed hover craft or for automotive application the electric motor number 28.

Also note pneumatic compressor on assembly number 24,7,32,8,7,4... will also work as an impeller for the initial start cycle.