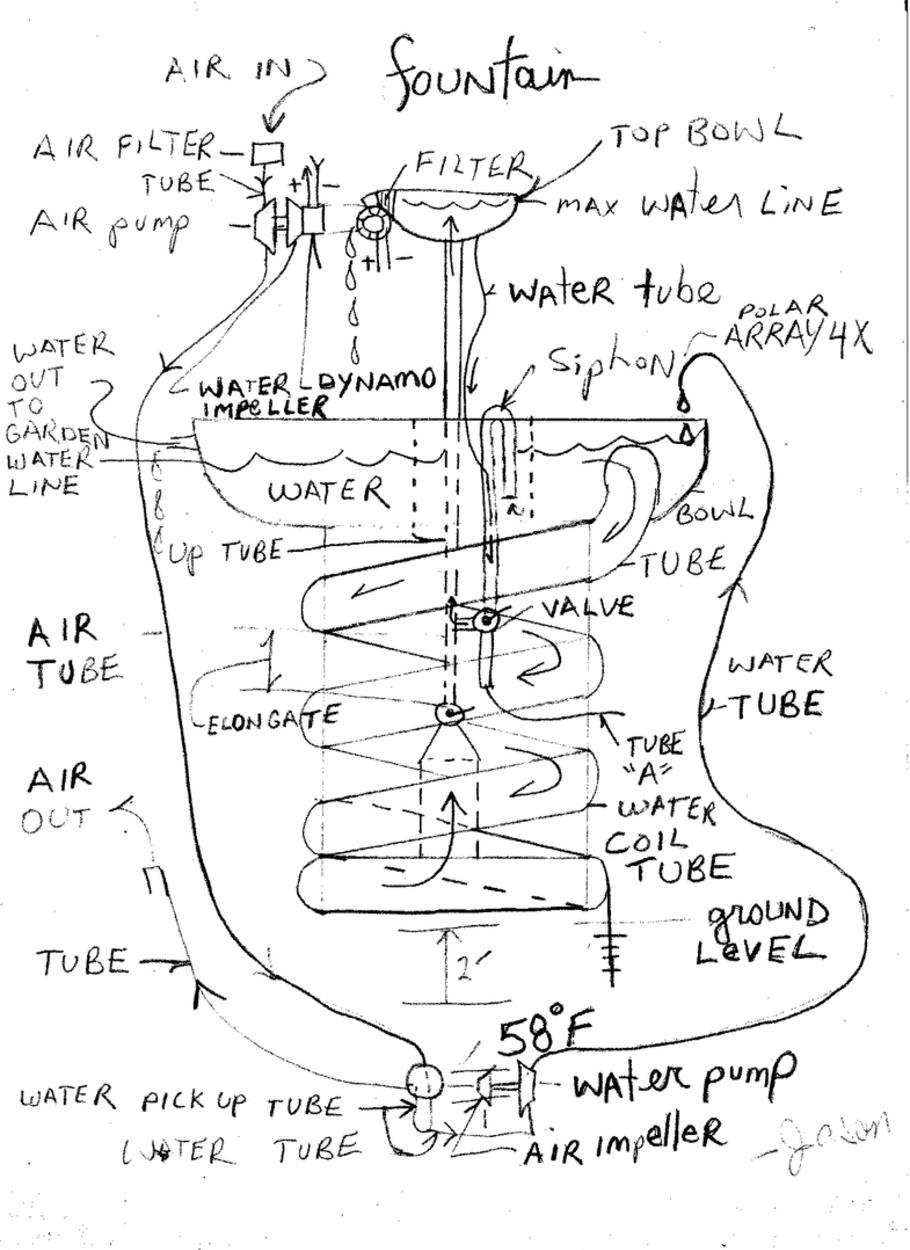 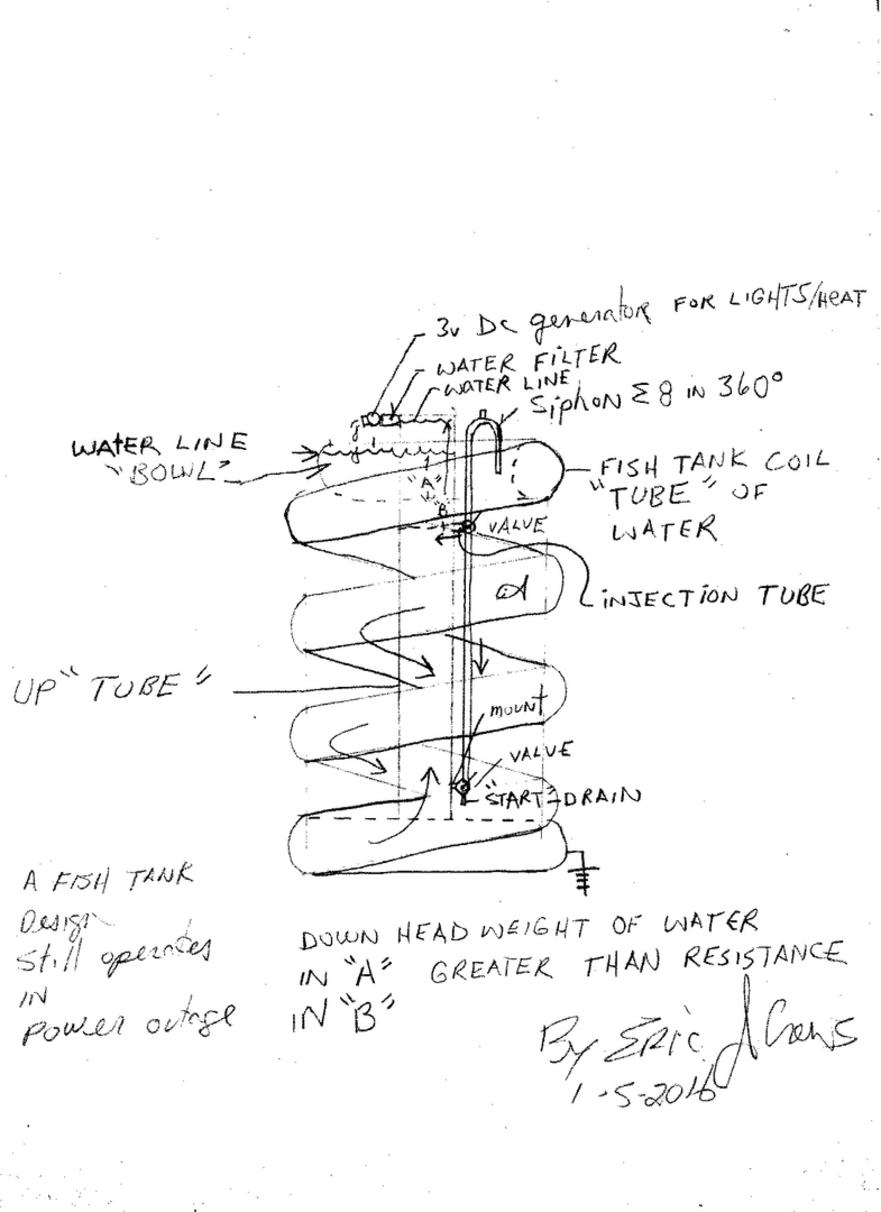 The copyright below ( http://designdeskinc.com/pressure_coil_generator.html)  all system descriptions upon this Html file, Hereby released by Design Desk Inc. globally ! *Use with caution please use due diligence in research if using the designs... careful of static electricity in flow systems be aware of electrolysis  ... do electrically ground correctly use correct pipes / tubes  Bless Your Hearts.. !

The dc dynamo generator may be of larger voltage then driven by water wheel / water impeller driven by the return flow of water into the bowl....
If the electricity is then used to de humidify air and the water pumped into the bowl... then the "fish tank" becomes a fountain with over flow of water for green houses ...fields etc.....
The water injection into the "up" tube will then vector upward also causing a spiraling flow to cause adhesion.......

The "head weight " in the bowl is the distance from the siphon intake to the water line in the bowl.
* note -  1/2 way up the  "up tube" is a smaller diameter than the downward flowing spiral tube.. upon "up tube" an inverted funnel may be placed to increase the velocity of
the "return water" then also adding the water pressure from the siphon.... spiraling.... the inverted funnel will have a water valve upon the exhaust flow tube... closed when
filling the first fill..of water...   Next the the siphon is started.... ( water pulled all the way to the base lower valve then the lower valve is closed ... then the siphon injection valve
is opened quickly followed by water valve upon the exhaust flow tube then connected to the inverted funnel... the system should then give enough up flow to then
continue...  Pressurizing the siphon is also an option as the maximum up flow then can also be routed unto the node upon the apex of the siphon to then inject water
downward.. ( causing a lower pressure above the injection tube /with dispersion spray tip then venting at the low end of the siphon tube just before the injection tube into
the "up tube" ..... then causing an increase of water flow rate injected into the up flow tube giving greater "height " allowing for greater down force to generate
electricity... this allows the siphon to continue...

* If tandem with the technique of passive de humidification the the cost of harvesting water will also be reduced ( ie. so that the water impeller wheel is the attached to an air pump to then cycle humid air through the ground at lower temperature to cause moisture at the low point of the cycle under ground to then be pumped back into the system by mechanical transference motivated by pneumatic air flow of the humidity collection system with the water then directed into the bowl , storage container ...or gardens.... :).

* Note  - If used to grow fish the the appropriate screens for fish safety would then be in place... Aqua culture.... with minimal cost...( addition of flush under gravel filter to keep
the system cleaner... flushes fish excrement....


This system is a "low cost"  clean water production system that uses gravity to then collect clean water from that air while producing electricity.

*Note -  On the  design below two of the siphon start tubes "A" can then be attached unto the lower part of the main water coil tube to then cause spiraling injection....
( causing turbulence and adhesion then also acting as a  fluid "Archimedes screw" as a liquid pump being then liquid flow shape within the water coil..within the flow cycle. ),               this action is after the siphon has been established.... the connection nipple upon the main water coil is also a one way valve that actuates when depressed to allow flow into the
main coil... the water tube from the top bowl then entering the siphon then may also be at a lower location upon the up tube then increasing the siphon water injection pressure...

Since two siphon tubes are then injecting into the "up tube" also slightly vectoring up ward with a slight restriction at injection tip orifice  then also causing a helix  ( like a DNA )
shape ,  then that  flow then also merges with   the discharge from the funnel also causing a helix ( DNA ) shape the offset by 90 degrees..the difference in hydraulic velocity
the with adhesion will change the pressure....  &  resistance.... from the horizontal injection from the siphon ... (ie. siphon injection causing up ward vectoring helix  at 0 and
180 degrees  and "up tube" helix flow then at 90  degrees and 270 degrees ). An additional "free run"  tube with water valve  from the base of the "upper bowl " then allowing
water injected   into the funnel at  quadrant upon the circumference of the large end of the funnel , ( injecting at 60 degrees upon the horizontal plane into the funnel  ) The
large circumference   then to cause  a spiraling injection accelerating the twist... of flow....

* Note - Upon starting this fountain there is also a start valve within the upper bowl  ...closed manually that then returns to the open position when released...

1.  Fill lower bowl with valve closed at exhaust of funnel ....

2. Then start the siphon flowing and then close all water injection valves  upon the siphon that allow water into the "up tube"....

3.  Connect the siphon tube "start" tubes ( sum of two to the lower part of the water coil....

5. Then open all  valves simultaneously by releasing the spring loaded intake valve upon the upper bowl actuating the flow valves upon the system by pulling the
steel cords that adjust the   system valves position  ( siphon tube valves then vector venting into the "Up tube" [sum of two] and into the lower water coil [sum of two] ) ...

*  Note.... The water tubes from the "upper bowl" do not require valves... they do however require a screened intake disk to keep debris out of the flow cycle ..The water exhaust from
the "lower bowl" and siphon intake also require a screens to filter the water also keeping the debris out of the water coil and siphon cycle ...
( The filter screen should then be of non corrosive stainless steel.. ).

* Note - The air pump upon the "upper  bowl" assembly will require gearing to accelerate the velocity of the air being pumped in as to compensate for the resistance of the water then
being pumped up back into the lower bowl. An additional water condensing coil under ground also may be added to allow for greater cooling surface area ...the additional
cooling coil tube will then discharge into the underground water pump intake to then return to the lower bowl. If forced cooling is used by refrigeration systems then powered
by the electricity generated then a cooling exchanged can be place in the air intake filter  to cause the humidity in the air convert/ condense into water....

* Note -  Material selection for system construction  must be so that the selected materials are within the maximum operation parameters of the system dynamics ie temperature
pressure etc.

* Note -  System is able to be produced in larger sizes....  for Municipal electricity and clean water supply..( Humidity then harvested by powered de-humidification  with electricity
derived from the "top bowl" discharge with the electricity produced by water impaling a turbine connected to and spinning generators then feeding current to refrigeration
systems for de-humidification ( requires controlled ventilation  air exchange ,  within the sealed pressure chambers) .... ... also may be implemented for Aquaculture.....
algae production for plastics / and oil harvesting..... The upper and lower bowls upon the
system are   covered...to prevent excessive evaporation.. debris infiltration and protection from particulate matter contamination. System then applied to arid zones to then
become productive for agriculture cost effective.

*Note -  System may work with air pressure as well..... just requiring a pressurized pressure start  ( system would then use "sealed upper and lower bowls with controlled
venting ... inverted with third containment case the system might float"? causing lift with no moving parts... ( except valves... )

* Note - This system with a "tall" upper bowl then as a pressure container , air pressure and water ( regulated with blow port and max pressure safety dump valves  ) with the
discharged "head weight" then increasing velocity of the cycle...   to increase pumping capacity by causing more force  cause water uptake by additional pump from
the oceanic floor    with the system  upon a floating buoy to then filter the nitrates from the effected coastal fisheries also then pumping air  ( by additional air pump ) into
the water to   oxygenate the water from the  water discharge from the "top bowl" then pressure chamber.

* Note -  Said system will have to deal with static electricity ! Critical as motion causes  electrical charge at high  velocity so within the system no electrolysis can occur.

*  Note - Also upon the lower coil upon the high pressure point the being the exhaust of the funnel,   redundant max pressure over pressure safety valves will be
required ...the resistance set at different intensities by coil springs  and the sum of four max pressure over pressure
safety valves will be in place with the last two valves the being  as  powered hydraulic evacuation discharge ports vented by high speed pumping. The max pressure
over pressure safety valves  will also have fault  electrical pressure sensors and  report to the mapping logic circuits that control the system. Recovery of fluid ( oil ) discharge
is then required into a   containment tank that will also then be able to pump the oil back into the system when the cycle has reached correct operating parameters.

* Note -  It is be required to use operational fluid of  system with  non conductive oil..with electrically insulated inner flow pipe linings also then electrically grounded, - Also
still producing fuel less   de humidification for filtered water for consumption upon the buoy.

*Note - The system  and may also be able to produce cold air    ( via refrigeration system / blower powered by the generated electricity )  to then rest upon   the ocean surface
to reduce hurricane formation.....

* Note - The lower bowl upon the buoy system is also  covered...to prevent oil loss...The oil  discharge from the upper Chamber " pressure cylinder
will the discharge regulated back into the "lower bowl"  to then be recycled within the system while the flow cycle will provide rotation for ocean floor cleaning and air injection
into the water to oxygenate the ocean. "Self Sustained " Oil Jack " , buoy with cold air discharge by Nitrogen cooling system  also providing clean water tap with filter and
location ( GPS )  and   distress call transmitter / receiver  ..satellite cell phone....  and a silly little cup

* Caution * all sealed fluid velocity compounding systems must use non conductive oil...if the system is "open" ie venting to the air...with correct ventilation ,say within a
greenhouse that vents ...then water may be used for the system ie... ( water fountain ) .... but the coil must be electrically grounded as the system may produce static electricity.