The Oil Ring Generator is a velocity compounder regulated by an increasing stator electrical level and a rotational speed limiter upon the drive shaft assembly. The design requires manual

pumping to start the cycle.. If placed half way within the ground it would make a good bike rack...then also providing electrical current to heat a side walk or power emergency lighting for traffic signals.

The circular ring tube has a max pressure oil dump safety valve that vents in buried containment to then have the ability to recover the oil. The system is electrically grounded and coated with a non conductive weather resistant coating that also acts as an electrical insulator.

cycle . Their intake orifices are the stepped rise intake ports curved capped triangles with two exhaust ports one aft in the low point of a venturi  triangle vertices ( then vector discharge as the fluid pump screw ) the second then as the open inlet capped ( top is solid ) triangle edge open orifice then gradually morphing into a funnel. The down tube intake ports are in increased radius to allow the same volume of oil flow into each "down tube" . The entry may also include a funnel venturi to then add suction by off set side injection of oil flow to then cause a pumping Archimedes screw within the additional funnel  by fluid direction discharge causing a fluid pump by fluid within each down tube.

The impeller will then also act as a compressor upon the top half of the mechanism.The curved  "return" tube the as a slight funnel with the three head weight gain tubes the intersecting the curve tube to cause a spiraling fluid flow to increase the fluid pressure within the "curve tube".

The base pressure return tube then port connected just past the low quadrant of the ring tube then uses resistance "back pressure" / " weight" , of the fluid to cause greater fluid injection pressure then merging with the "curve tube" / funnel to yield greater fluid rate of velocity and pressure venting unto the hydraulic impeller / compressor.This increases total fluid rate in the oil ring generator.

A fluid rate oil velocity  speed gain limiter then as a pressure relief safety valve and  bypass tube then will connect actuated by a max pressure ( mechanical max pressure safety valve ) actuated to allow fluid pressure to then be lowered between the fluid impeller and the curved tube return funnel to then tube vent in the opposite flow direction in the ring tube......( turbulence as a break ).

The Dynamo ( permanent magnet generator Dc current ) then as a sealed electricity producing generator to then also be gas pressurized with a non conductive inert noble gas such as Argon. This prevents low level Ozone forming in low elevations.

The manual hydraulic "oil" pump, manually  actuated by the up and down motion of the pump handle is also connected  to the low end of the 1:20 ratio gear set  causing the fluid compressor to rotate. The manual hydraulic pump ,  then discharges the fluid unto the top half of the impeller compressor to cause fluid motion by hydraulic impalement and mechanical direct rotation to begin the oil's directional cycles.....( the 20 r.p.m. side then connected to the compressor impeller  by mechanical transference )... the handle will then cause rotation upon the downward push and have no / low resistance upon the up pull of the pump handle also then being of a gear system that ratchet's like a socket wrench.  The handle will not rise by itself... once depressed it stays in place....

This  factoring fluid adhesion confined within a tube to begin to produce a drafting effect to then cause greater fluid pressure and yield greater fluid velocity rate....  The lower half of the fluid ring generator's compressor impeller is then to motivator "source"  of work to the compress the oil within the ring tube's top half yielding a greater overall velocity rate yielding usable levels of electrical current. 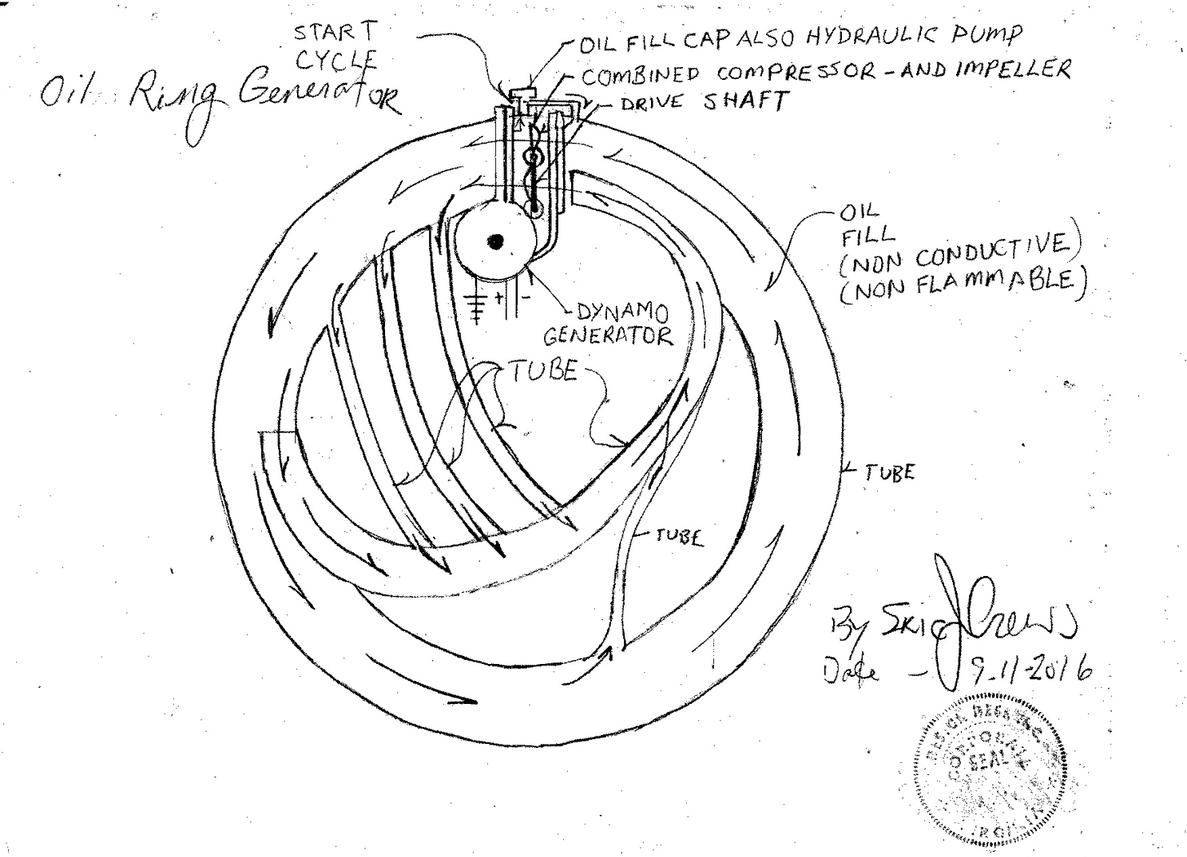