Currently the Gulf of Mexico has serious problems due to the annual  deposition of farm run off. The compounding problem has produced a "Dead Zone" that has caused economic stress for the  coastal fisheries. The design system is a multi stage tooling system involving the harvest of CO2 upon an Amine "stripper" buoy then Cracking Co2 into carbon and O2 (stripping it to O2) to then cause liquid O2 frozen embedded in the formed ice sheets  upon the Gulf of Mexico's "ocean floor by a submersible.

The buoy's drag submersible  is then containing a nitrogen super cooler  / ambient ocean water ( Gulf water ) , cooling exchange system  that drops the temperature of the water just above the ocean floor  to encapsulate the sedimentation. This is incurred to  then cause controlled dredging of the "under ice material" preventing "drift" of toxic runoff deposition.

There are several individual tools within the total system .

First the "Amine Stripper Buoy ( autonomous ) then also a fuel less " Active" on-board generator system , to then also produce  ocean floor topography via  sonar mapping and navigation equipment and infrared camera systems to the be able to locate the ice fields upon the floor of the gulf. Combined with the buoy  is then the submerged cooling exchanger ( upon the drag submersible) that will guide the  liquid oxygen  ( small storage of O2 and liquid O2  - small hose for the liquid O2 to be transported "pumped" to the drag submersible   / for safety concern- plasma "arc static electricity " dissipation unit upon the hose an  pumping system.

Second a submersible dredge  that will contain a vitrification system ( glass works - processed the stratified ocean floor sand . The  glass dredge to then bore under the ice extract the sedimentation with pumping system  / dry the sand nitrate mix  ( also containing other pollutants - caution must be taken within the design system to understand the thermal reactivity when embedding the pollutant in glass to be reintroduced above the ice after cooling- "Active" testing is required in the sedimentation stratification system to detect intake of thermally reactive volatile compound.

The "glass works dredge" ( submersible)  will have attached a surface floater for the filtered intake of air also used for system functioning  (ie. filling the spheres with air for flotation) or with "air " inert / non flammable , then to encapsulate any radioactive material the dredge will encounter. The "glass works" dredge will form air filled glass spheres with the toxins within the glass to then float the glass  balls to the surface ( 8"dia or greater according to fish size .. so ingestion  will be avoided by the aquatic life), to be collected by a skimmer ship for extraction. outer surface then safe to handle with the glass as insulation for toxin or radiation.

The  "glass works dredge"  will also contain a cooling drag submersible that may have the capacity to cause ice upon the floor of the Gulf of Mexico to then also contain a deep water electrolysis system upon a drag unit,  that will separate low level ocean water ( electro-tip automatic cleaner) under the super cool ocean water to then cause frozen ocean water with increased O2 content the hydrogen then remaining in a gas state and vented in small amounts to the ocean surface... ( this allows for , when the frozen submerged sea ice melts after  the sedimentation cleaning, to yield gradual O2 enrichment of the ocean water ). The salinity will be measured in the process also during this process a maximum area of processing is also a factor. The " electrolysis drag unit " is

a ( separate unit from the "glass works dredge" and will store only minimal amounts of O2 as not to cause a hazard...  The system will also implement a static electricity plasma box to de-energize the system's static electricity that might form within the pumps and hoses...

The third system then a hydroplane skimmer ship that catches the surface "float spheres.... in collection system. please view http://www.designdeskinc.com/u.s.o.-dredge2.html

With fueled systems this type project is not cost effective! Yet with the design systems upon this site the feasibility then becomes within economic reach since the human labor and fuel cost  are negated. There is not much money in the correction until after the systems intention is fulfilled making it a difficult investment to fund.... as the machines complexity and cost then are initially expensive...

In the water there after  bubble cup  buoys will then oxygenate and filter the annual run off to continually correct the problem.

Granted the task of cleaning the floor of the Gulf of Mexico is an enormous challenge but with fuel less Autonomous submersibles the system, once in place, will require minimal maintenance cost. The situation in the gulf of Mexico is a "chicken and egg " problem.... the pay out once restored would produce the required funding to speed the process.. The effected "dead zone" in the Gulf of Mexico is estimated at 8000 square miles (Wiki).

The designs below are then of the  the delta filtration  buoy dredge ( left side depiction) with autonomous remote fuel less smaller "floor sweepers", number 27. The "floor sweepers " then prevent the Nitrate laden silt from entering the deep water of the Gulf of Mexico then with many small units having the capacity to have great range in the clean up effort . The "floor sweepers" are fuel less and  work in unison  (many units) placed in the river delta just before the water enters the Gulf of Mexico. The buoy may also be used as a floating fish hatchery with slight modification to the design system.

The "glass works dredge" ( The "Sea Turtle" see turtle?... then depicted to the right, is the side view ( top right) and the front view (bottom right) :).... would take 400 full cycle function in a single location for  1 mile

square ( aprox).. note the entire floor of the gulf  is not frozen at one time... it would be done in smaller sections to not effect the thermal water convection currently to greatly.

5. ladder ( telescopic ) on automatic hinged lid ( allows for lamp change and lower level egress when the

an all stop function

system to float - flotation may also fill all available cavitation to then force the displacement of water.

33. habitation chamber ( can separate from the rest of the submersible  and cause controlled resurfacing to

with manual controls  for resurfacing as redundancy

for navigational positioning. Multi sealed force vectoring positioning systems along the length of the vessel

36. Hinged frost bar emits super cold ocean water under pressure to cause ice upon the floor of the ocean

37. bumper ( with tow package)  to drag  dredge - allows for submersible connectivity via power and slurry
hose to the haul a bottom less freezing and dredge system with system similar to  melt bar hot  water
jet, number 42 , and vacuum tube dredge intake system also operating on a hinge system. The drag
dredge( flexible union junctions),  may be up to 1 mile long by 100 ' (feet wide) and will have the ability
to surface in and of itself.

the "separator" , number 33, two separate tanks and the tank then from the bow to the aft of the

vessel containing the blow air to then , after the water in the ballast tank has been evacuated then

gas is at to high of concentration levels

75. hydraulic pistons ( repeating  up the boom)

a fuel less generator.  The gas then stored in low volume to fill the glass spheres to then cause them to

float to the oceans surface. the gas "air" is made inert non flammable with other gases extracted from

82. locking system for the occupation system number 33 with manual and automatic actuation

surface is safe ,non toxic final coating of glass and will not  crack when introduced bask into the

Due to the nature of the material some float spheres  material may form more of a hollow clay ball then encapsulating  the sedimentation's toxic compounds caused by agricultural run off . The encapsulation  material is not restricted to a glass alone but must go through a vitrification process ( heat ) to cause a rigid locking encapsulation making  handling safe and sealing the toxin ( pesticide / fertilizer residue) then ubiquitous upon the gulf of Mexico ocean floor.

The "drag dredge"  ( a similar system to the freeze system with fuel less pumping ) may then be made to direct draft the slurry up ward to subsequent pumping systems since the depth is so great. The "riser pump system" then also with fuel less pumping system for the toxic slurry. The riser pumps then is aligned in a stair case fashion with 10"  (dia.) and 1000' long hose connecting to the subsequent riser pump( until reaching the barge floating upon the surface), will also have independent navigation and act as "boost pumps"  ( multiple units upon the 5+ mile dredge intake tube then to fill a barge directly for quick sedimentation removal). The riser pumps then accommodating the sum of 8 hose per 20' of width 40 total across the 100' wide drag dredge. The slurry volume is then made available in a reasonable time frame.... 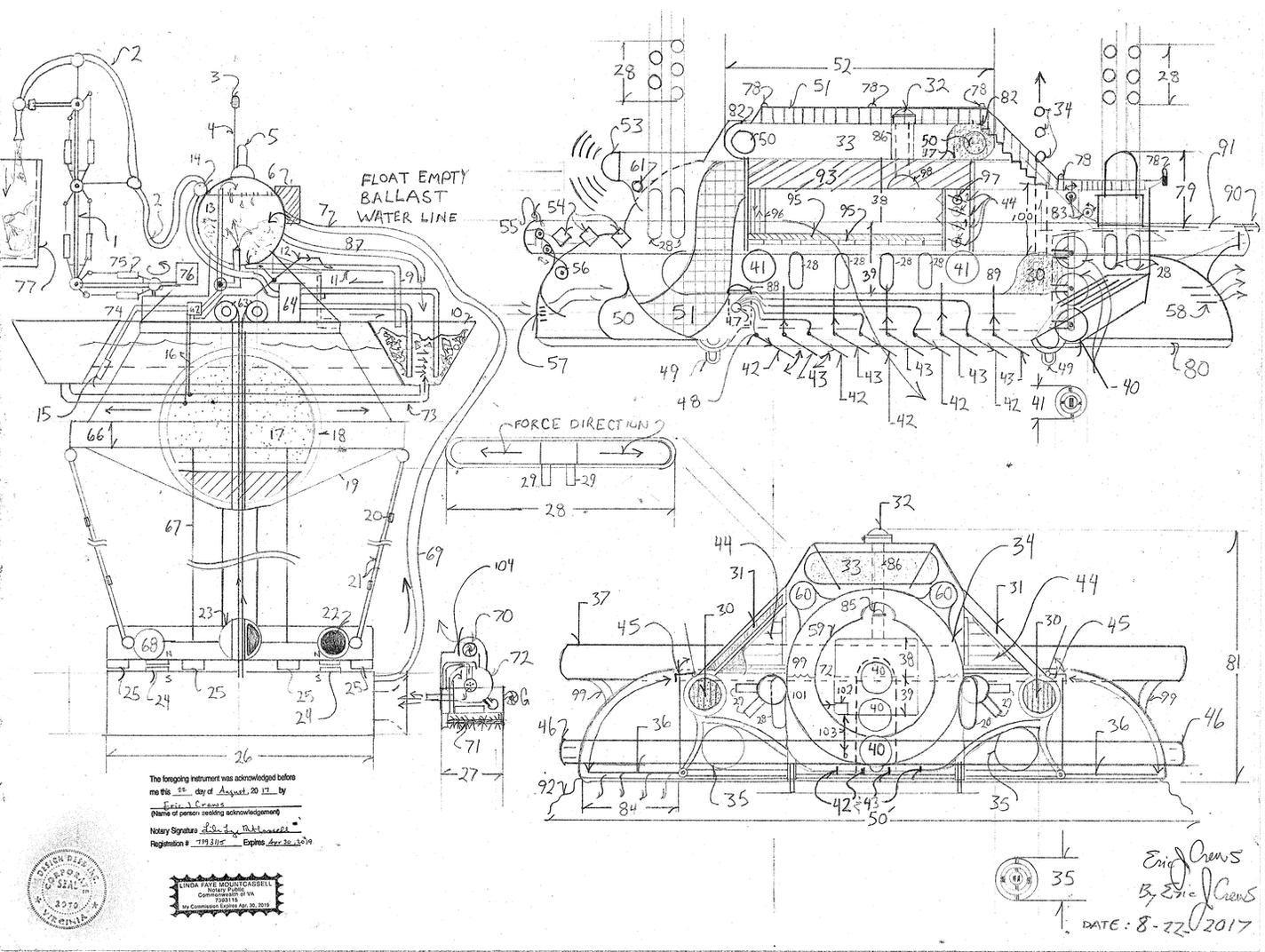