This design replaces gasoline for transportation and all other fuels for electricity production allowing a high density power source that can operate 24/ 7 independent of external environmental conditions ...sunlight wind water etc.. It makes atomic power obsolete as well.

The "Motivator Type X1" is an electric motor system that will provide for a self charging electric car with unlimited range.  The system is "load re-active" meaning the system will speed up when loading is placed upon it.  This yields more operating current for the system to preform it's function.

*note this system is superior to:
internal combustion (gasoline) because it does not require fuel and is more cost effective to operate.

Fuel cell engine systems....requires no fueling does not carry combustible material....and no additional infrastructure is required for the advanced system to be implemented...

Plug in Hy-Bird automotive engine systems still "tax" the energy grid and require gasoline or other fossil based fuel...more expensive and toxic to the people within the environment.

Plug in electric vehicles  still require charging and have limited range and do cause a demand on the Utility electric grid that the system is not designed to handle currently and will be massively expensive to cause Solar or renewable sources for the electrical production to charge the plug in electric cars.

The Motivator Type X1 is self charging "engine" concept that will provide for unlimited range without requiring the infrastructure to be up graded to implement the superior automotive product.

The design powers up from the battery ( number 21). The Dc current is controlled and inverted into Ac current and fed to number 18.

The "start" circuit is as follows;

With number 7 "hot" generating current then to numbers 11,17 for the "hot" magneto in number 17. The magnetos energize the field coils / stators, in both generators.


The hydraulic cycle compounds rotational rate in one direction pressurized by hydraulic pump number 8 causing the hydraulic fluid to impale Hydraulic impeller number 2 so that it is accelerated in the same direction that the electrical current is causing within the electric motor number 3.

The circuit  pathway  7,11,18,16   and into (mechanically tilting by ratio gear set ) the Main electric motor number 14. This will set the "base idle" for number 14  of say 1000 R.P.M.  then the advancement is able to take effect by the higher current generated in number 17 because the current level then over powers the "idle " and causes higher tension in the advancement circuit. So the compounding hydraulic cycle is producing enough current to motor number 16 to say 4000 r.p.m. ..at that point the variable resistor for the main electric motor is at low percentile or zero but the main electric motor is rotating at 1000 r.p.m. Then the advancement circuit is at current generating level of 4000 r.p.m.  from number 17 and feeds the additional magnetic pressure, current,  to the main electric motor number14. This is "pressurizing a tilt" and causes the whole system to compound in speed and power. Just to also be clear number 3 rotates once and causes twice the rotation in number 5. Number 14 rotates once and causes four times the rotation in number 16. Number 5 and number 7 are tandem rotation . Number 16 and number 17 are also tandem rotation.

From number 18 at current intensity level of output of number 17 ( current derived before variable resistor "a" circuit) is then by "jumper" circuit into number 10 feeding the higher tension to accelerate the assembly that is also being advanced by compounding hydraulic fluid velocity flow. So this system is compounding both electricity and hydraulic fluid velocity flow.

Just to be clear...number 18 ("throttle") contains two variable resistor circuits that work in tandem we will call them circuits "a" ,for acceleration and circuit "b" for base /base idle.  Circuit "a" is as follows 17 ,18,14,10 (from10 into the compounding hydraulic cycle.) The base / base idle circuit "b" is 7,11,18,16. Circuit "a" also will increase power in circuit"b". The "start"circuit powers both "a" and"b" and only operates for a short time until the transformer is at power level to charge the battery and does so.

The switching boards report to the mapping computer and balance the "idle" and also allow for safe operation to prevent excessive "run away" effect.
With number 18 "hot at high tension the current is also fed to a Ac to Dc transformer that then feeds current to the battery charger and keeps the battery full for the next restart

If you think about it it's easy to understand this system ...the hydraulic system spins up powered by the battery..so you have a limited time to replace the feed current that keeps the system rotating...the compounding hydraulic generator assembly will produce more current than it takes to rotate the assembly...then as a function of time the power level will increase until the current level then sustains rotation for the hydraulic assembly and powers number 16 to say 120Kw while producing say 80Kw in the generator number 17...and number 17 current output is then fed to number 14 (main electric motor) ...remember 14 is "tilting so the 1:4 ratio gear set resistance is then zero and the rotation rate of number 17 is then increased when number 14 is advanced ..this yields a constant greater current than the main electric

This system will have two circuit pathways of operation....Battery direct and "active"  generation. This allows the operator to switch drive systems in case of fault. A roof top solar charger, to charge the battery, will also be incorporated in the final automotive design.

then tandem rotation with numbers 5,7,and 8.

11. Current switch board and magneto
control for number 17

*note* This system can also be used to rotate industrial scale generators that would be connected to the drive shafts number 36 or for use in the mass table design on our site with the prior described assembly generating to power the rail wheel drive motors on the top of the mass table. The design's size can vary both very large and into the micro ranges.

*note* This system will also work even if the hydraulic parts of the system are omitted . ie. the complete hydraulic assembly can be omitted so that the primary assembly is fed current from the battery source into the electric motor on the high side of the 1:4 ratio gear set then spinning a generator that feeds current to the electric motor on the low side of the ratio gear set.

*note* Clarification to the drafting....number 13 also will include the shape of number 14 as the transmission is below the electric drive motor number 14 and from the low placed transmission emanates the drive shafts number 36 that will connect to the wheels.

*note* This system will be reduced to flow schematic within one "motor" / "engine" block composed of carbon graphite /epoxy composite to reduce manufacture cost and weight.

Number 8's hydraulic discharge then impales 2 (hydraulic impeller) yielding 4500 R.P.M. in number 3 that produces 9000 R.P.M. in numbers 7 and 8 . Number 7's current output then fed to number 11,10, and replacing current feed from the battery at current level of 9000 R.P.M. That current level is then applied to feed the drive motors accelerating the hydraulic cycle. The system compounds and is circular governed by the mapping computer.

Number 11 branches the current to feed the magneto that then feeds the field coil in number 17. Number 11 also channels current also to number 16 (electric motor) and counter acts the field resistance in the generator number 17 while driving number 14 to about 1000 R.P.M (base idle).

The current level in number 17 will then also feed energy to the compounding hydraulic cycle accelerating the whole system , (load re-active).

The battery will only be being charged when at operational speed. All system components are controlled by the computer except the foot pedal that activates the variable resistor controlling current feed to number 14 (main electric motor).

So the hydraulic cycle is a compounding reducer that generates current to counter-act the resistance of magnetic fields while generating also causing a tilt in rotation that is then also motored causing the forward advance of zero point of magnetic pressure while generating with the produced current re-introduced into the system with an dual axle output drive shaft rotating for application. 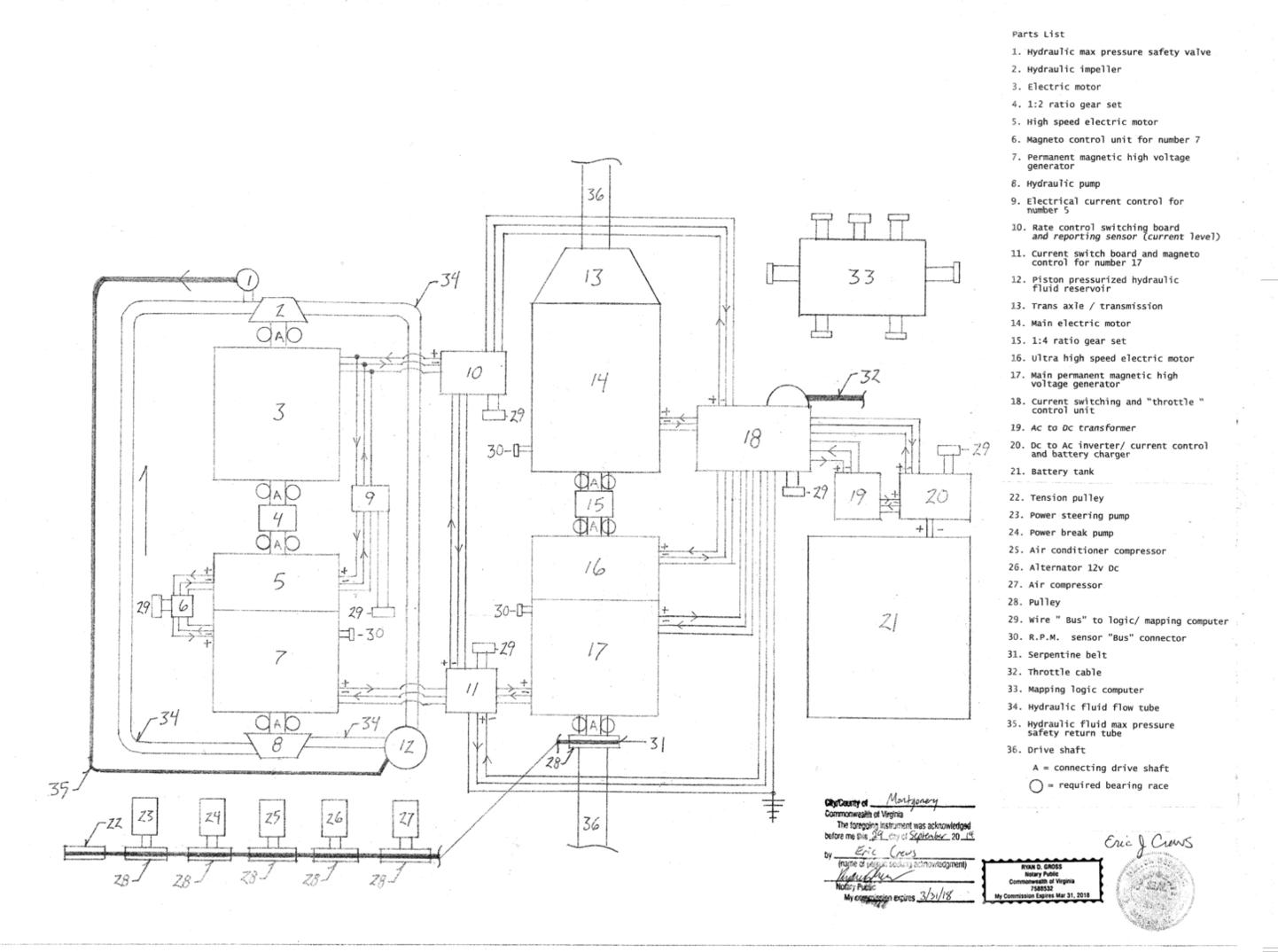