The "Mote Boat" is a foundation concept that will then reduce the effect of an earthquake to then allow for the building to remain intact with out damage to the property or it's occupants.

The anchoring moorings then within the  mote as  coil springs then of non corrosive material ( flexing dampeners ) that will not be compressed by the total weight of the building yet align and "hold still" the structure along it's perimeter. The coil springs the allow for shock absorption of an earthquake.

The idea here is to then cause force deflection when an approaching shock wave from an earthquake is incurred. The coil springs are then able to also be removed to then drain the mote if required to then allow the house to sink slowly  ( upon hoop hinged guide rods that lower the dwelling safely), while the water is then pumped out of the mote. The system then with "earthen" roof becomes hidden. Egress would then become available via doors then at lower level.  Additionally if the area becomes flooded the increased water level will not be able to remove the dwelling from its location as their are rise guide poles to allow for high water yet then keeping the domicile within the area of the mote...

This design then also for forest fire prone regions to allow for a safer dwelling that can with stand the harsh conditions with out massive incurred cost of construction.. the mote then as deep as the dwelling is tall. The roof may also then be a pitched type structure but must be sod covered with no flammable surfaces exposed.

The design will include motion sensors and infrared light ( heat detection ) to confirm that it is safe to slowly  lower the dwelling at stepped intervals as to not allow for the function to cause a hazard. ( ie. the water pumping system will lower at stepped interval  then recheck if safe to proceed.. then pump again... lowering say another 1' ( one foot )...  fencing may aid this function).

In cold climates it's critical to prevent the mote from freezing.... the freeze thaw cycle of the system must then be avoided by heating the water in the mote with a fuel less hydraulic draft cycle.

In arid climates water then being scarce will fill  and maintain full level via fuel less  high voltage  yielding de-humidification / condensation of water.

The septic system is then a two stage system allowing for the interior  tank then to mix and meter the additive to digest the waste automatically. When it become necessary to sink the house the hard line exterior septic pipe is the disconnected from the house then at a flexing pipe junction ( allows for the house's level to be compensated for as the water level will slightly vary according to water level). The first stage interior septic is vented ( air stack) and forced pumped by evacuation pump powered by the domiciles fuel less generator, The  house also has an umbilical connector for power out.. , phone, and internet connections to be un-pluged when required to lower the house.

The design system may also work for house trailers in tornado prone regions. A top coat of concrete then added with reinforcement will be required for the roof with high impact laminate of carbon graphite  embedded in fiber glass resin , then to support additional loading. A locking wench then to anchor the system for tornado....( like a ratcheting wench ). The final "roof" perimeter then a bit larger than the motes area to then not completely  "close " a lid ( allows for air passage) yet in the lowest position above the mote "wall" for added impact resistance from drop projectile...

Water treatment and maintenance will be similar to that of a swimming pool ( prevents any unwanted growth of algae or pathogen / the air space in the enclosure then able to heat by electric resistance... may also include Uv lights to reduce growth of mold...).

To prevent and control insects from gestating within the water corn oil will then be added to the stratify atop the water's surface tension.

The environment some time produces compounding conditions , flood and high atmospheric velocity.. "Hurricanes" so this system may work even in flooded conditions to then submerge into a water tight  recess is additional water pumping internal then to act as evacuation pumps ..

The design would then go under and be a submersible house...The lid then will be tension via ratchet cable wench with water / air tight seal.... A CO2 ( carbon dioxide ) air scrubber / removes carbon dioxide, will then become standard equipment within the design. A fuel less "draft accelerator" generator system ( sealed motors and generators) will power the internal evacuation pumps should water permeate the recess "basement". Scuba gear stowed just in case...

The design system then also to lower itself ie... the building, is able to  "lower" itself into the recess foundation) by pumping the water out in case of high storm flooding ) requires CO2 scrubbers ) and of is high velocity atmospheric advent occurs. 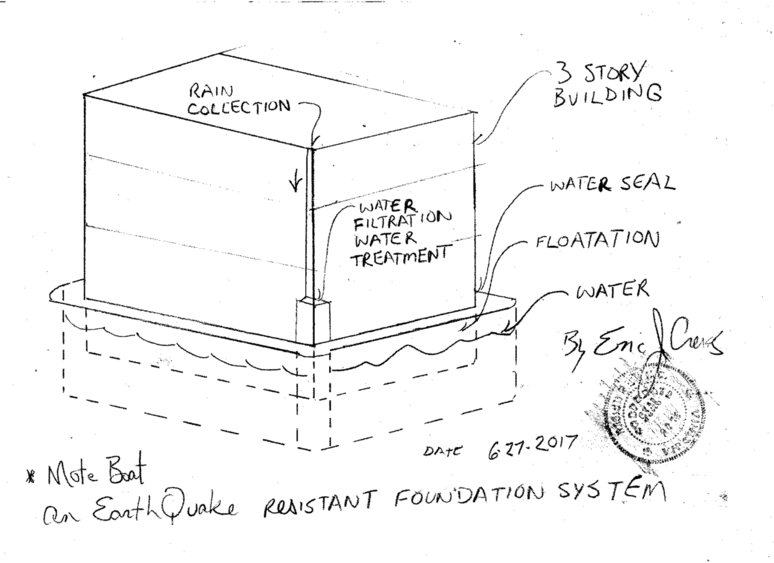