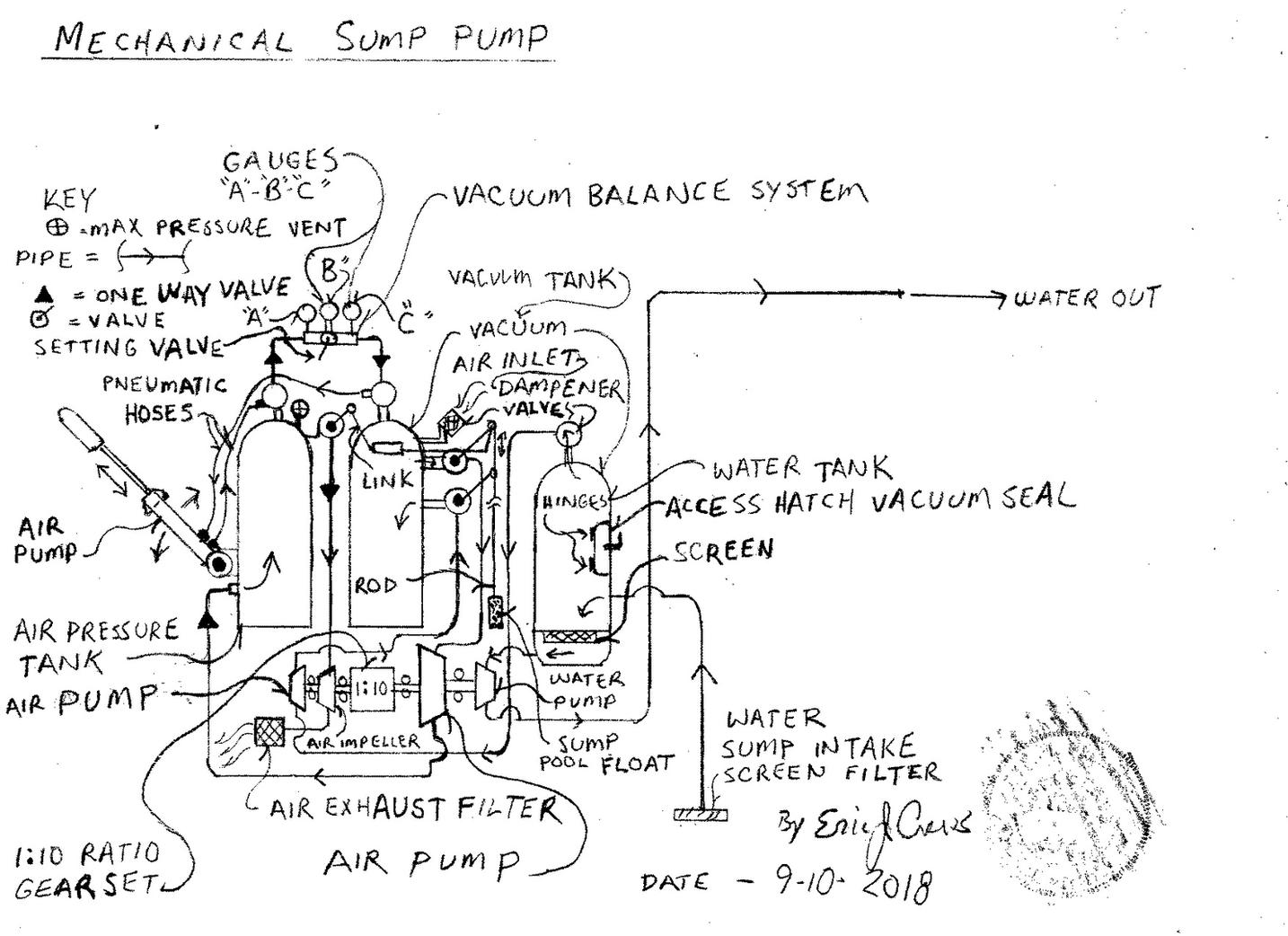 The mechanical pump design is being introduced due to the fact ..so many households then have problems with flooding and electricity failure simultaneously.

The design may also be used as an agricultural irrigation pump.

The design is then also incorporated in the following design

blower "Air Stratifier"  (listed at http://www.designdeskinc.com/air-stratifier.html ), that then chills the gates via decompression of Nitrogen like a  refrigeration evaporator, acting like a temporary ice dam with the back water then pumped to the snow blower upon the "Air Stratifier's" cold air exhaust to then increase the time interval slowing the flood water as ice / snow upon the banks of the tributary rivers thus preventing urban flood damage or crop loss in the fields.

"B", is then a regulator also operating the valve ( electric positioning via solenoid)

"C", is then a flow rate meter gauge ( contains an "revolutions per minute" sensor (R.P.M. sensor, and

contains small dymamo driven by the air flow then being  measured. The dynamo then to provide

electrical current to  the speed sensor / R.P.M. sensor and  causes the flow rate meter to the give rate

of air velocity  by electrical signal as well as mechanical dial . The R.P.M.  sensor then assist in the

the electric pressure sensor  in "A" read excessive pressure. The safety system then as a "all stop" function

assisted by the sensor information via electronic circuit located within the air pressure meter letter "A".

The above design system then actuated by the float ballast as it is made of a buoyancy  "float" mass to then cause the rod to open the flow valves allowing the vacuum (negative pressure) to cause rotation upon the drive line assembly.  The connected link then with cable terminal ends to allow the pneumatic valve to also open. The pneumatic flow valve then causing rotation as the air pressure flow traverses across the pneumatic impeller.

The drive line of connected components then yielding higher rotation upon the output side of the ratio gear set at ten times the input rotation.

The larger circumference diameter air pump then is pulling a deeper vacuum within the vacuum pressure tank. The high side of the ratio then motivating the air pump rotary piston type  "like an old style aircraft engine" to then produce sufficient air pressure out put.  Multiple pistons then may be used within the rotary style air compressor depending upon the final total system requirement. A turbo compressor may be used as well... then more like a propeller air compression system currently used upon sports cars air intake systems.

The pneumatic pump upon the input of the ratio gear set then be the one of the 1:10 ratio gear set   ( acts as two stage air pump by the design of the internal  "wheel" propeller within the diameter and the circumference of the pump wheel is then a turbo compressor pump - inlet then toward the center ( transonic propeller - exhaust then upon the outer circumference  acting as an air pump ). The dual function air pump then tandem rotating with the input rotation of the ratio gear set (tandem with the one of the one to ten ratio),  then is caused to advance in rotation by draft suction of the negative pressure in the vacuum tank. the negative pressure will tend

to "draft accelerate" the circumference turbo compressor determined by the level of vacuum within the negative pressure vacuum tank.

This yields a compound incline in the rate of rotation as the vacuum will deepen until the operating parameter is attained and causes the dampener to then open allowing exterior air into the system. Required for stable operation..

The access hatch then with locking handle upon the door hinged upon one side with pressure (vacuum) seal allows for inspection and clean out should particulate enter the water vacuum chamber.

As a safety feature  an "all stop" function to shut the system down will include a cable sheathed then connected to the water tank's dampener valve to then by actuation level cause the cable to pull and close the valve 's then allowing vacuum and air pressure to flow. The float rising will also shut the valves off much like a standard toilet valve system. If this design is used for street drains  "to power pump" the road ways clear...  "distributed intake" is required to maintain a safe water intake pressure.

The intake "suction" will require distributed intake then being a greater intake surface area vs. speed of intake water then being pumped to reduce injury.  Also then with initial pneumatic start displacement controlled by the actuation of the inlet dampener valve and connecting cable system. The negative pressure tank dampener inlet valve will pull the cable and close the pneumatic air pressure valve.

The water pump then could also be used to cause aeration to oxygenate the fisheries or reversing Oceanic Anoxic events by active pumping and water treatment ( steam /  condensation / vapor stratification - distillation ( ambient external air mix in the stratifier / distillation system for safety) and returning oxygenated water deep into the bay lagoon or marina..while sequestering the Co2 as dry ice. The toxin then collected and removed from the cycle. The heat to then flash boil the water will then be derived from a water impeller system connected to a generator to produce electricity to then steam ocean water and run refrigeration equipment to condense the steam while filtering the toxin out returning the water at the correct Ph.

The design then is a perpetual motion water pump intended for remote application.