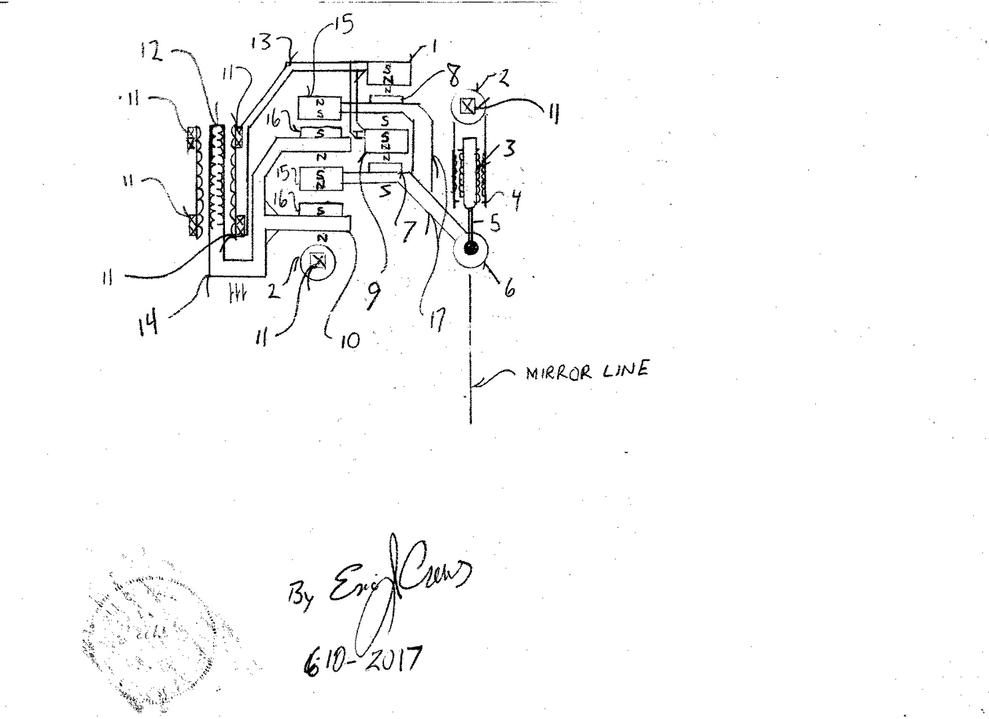 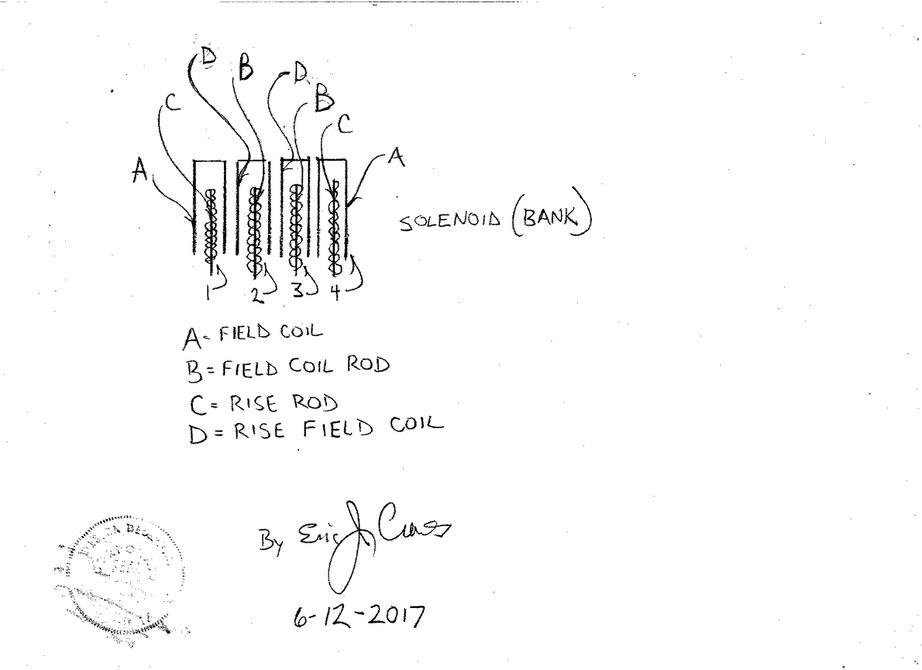 The following design system will allow for a hover car to then float above the slippery surface if the road is covered in ice or rain allowing the driver not to loose control of the vehicle due to the surface condition of the road. Hover motors ( mechanical balloons ) in spherical positional three ring mobiles may be added to the total design to assist in the systems gimbal functions.

Another way to understand this design is to think of a "rail gun" with the projectile then the core rod of the solenoid and the constant adjusting  field coil "launching" electromagnetic assembly then climbing riding a bullet.

Like a pendulum swinging a pause is incurred within the reversing direction. Just as say a baseball the thrown up into the air ... for a moment is is still before reversing direction then falling to the ground. The "hover point" then within this design is being used to then cause  within the millisecond "pause" since the mass with intertia then slows to stop before gravity the again reacts upon the object has the a "hover point" then allowing these engine systems to then continue to amplify the upward direction by constantly extending the "hover points" altitude / height to then allow the craft to rise...  then attached rising launcher for the solenoid the also continually readjusting it's height.

The when within a force reaction one direction of motion then causes the opposite direction in reaction. So with this design a pneumatically pressurized silicone oil the to enter expansion

pistons ( similar to shock absorption system ) will then off set the force along with the magnetic fielding causing the bracket system to rise. additional hydraulic fluid systems may have installed upon the flow system pneumatic recover ( to re-pressurize the holding tank for the pneumatic pressure above the silicone oil that feed the counter force hydraulic piston then attached to the vessel so that the "reactionary force" is then nullified..  allowing the rise magnetic fielding to then gain height with greater ease.

A "rolling valve" will allow for the piston to then have null / zero pressure upon the  opposite stroke ...allowing for the return to then occur without resistance. A hydraulic draft assembly also producing electricity will then cause the negative hydraulic draft then re-pressurizing the combined component pressure storage tank with air pressure and silicone oil.

6. connecting hinge ( then in guide slot to only travel vertical)

9. carriage rail ( support brace base for the electromagnets )

10. Solenoid guide brace ( locked into the main chassis to the only have vertical travel )

12. solenoid  ( as this is a quad bank the rail of solenoids the along the length of the vehicle

sum of  4 per quad 16 total.  Then for horizontal travel 4solenoids  forward (on the

electromagnetic magnets, numbers 1,7,8, and 9 to then

The above solenoid "bank" schematic allows for a graphic  understanding with more clarity...

When letter "D" is then rising in tandem simultaneously with  the field coil labeled as letter "A" then the sequence in repetitive fashion to cause sustained lift when in tandem with the balancing electro-magnetics upon the bracket systems in the first drafting listed upon this page. The "rise rail" then only attached to the  system upon letter "C's" angle base support .

Letter "B" then rises with letter "C" and letter .. Letter "D" then causes lift resetting the height of letter "A" to cause lift and travel vertically of letter  "C" then the cycle is repeated at high repetition rates. So that numbers 1 and 4 are tandem and numbers 2 and 3 are tandem in the schematic directly above.  Letter "C's" are then connected to one bracket system...  with the  letter  "B's" then connected to an additional bracket system for quadrant redundancy in function. ( ie two independent bracket systems then as a fail safe with full clearance for both bracket systems to function correctly). Both letters "D" and letter "A" attach to the hull.

14. solenoid "slide brace" supported underneath by a hinging torsion bar  and expansion spring

upon the opposite end of the torsion bar / lever ... the upward force in ft.lbs ( foot pounds) to

brace , number 14, just beneath the solenoid , number 12. The expansion spring then affixed

the "base lever"  , post pivot hinge, then constantly pushing up ward upon the solenoid core

below the solenoid .. the lift rail then affixes to the chassis that mounts the additional crew

reduced for the passenger compartment / helm

17. float brace in slide rails to only allow vertical travel

* Note - Upon the bank of four solenoids , number 12's), the two interior solenoid rod cores may , upon each quadrant bank then be inverse within the function... ie. the lifting system reversed still causing lift by alternating the components function so that the outer electromagnetic casing / field coil becomes the part lifted by the rod then acting as a continual adjusting field coil to cause the casing with interior windings to then produce rise . The same  magnetic repelling / attracting system with the bracket system then remaining in the same fashion ( ie. same polarity alignments).

The solenoids ( number 12's [ sum of four per quadrant],  then "fire" causing ( causing the core rod to rise ) force upon the outer length of number 14 then causing the vehicle's chassis to rise via number effect upon , number 13 . The center solenoid then  "fires" upward to safety counter balance. The system then as a rapid succession jacking system when all quad units the are operating in parallel. ie at the same time....

The main number 12, then constantly being re-positioned upward by the attracting magnetics numbers 15 and 16 then upon the lower assembly upon number 14 and number 17.

This causes the magnetics ( lower magnetic ) upon number 13 to then repulse giving rise to brace number 17 with it's associated electro-magnetics attached. This causes a rise tendency in the repulsing force ( repulsing magnetics)  numbers 1,7,8, and 9.

The effect in number 3 with the outer casing secured to the chassis then with the solenoid causing an upward pull to re-position the repulsion magnetics then giving rise to number 13 higher adding vertical pressure "lift to the chassis / hull of the lifter...

The solenoid "core rod" then allows for multiple pulse waves then in rapid succession with the sequencing of pulse current feed to the the rest of the electro-magnetics within the applied system. The system is able to be deemed an an electro-mechanical electromagnetic "jack" system that when with very high repetitive rate of sequence will have a tendency to lift.

The design required magnetic field insulation and circuit redundancy to reduce the possible failure of critical components. ie. the electronics must be redundant.

Due to the thermal operational range and electrical current requirement demanded by this design a cooling system becomes required also to then reduce resistance within the electrical conduit ( wires). The windings for the electromagnets and solenoids require , then with the wires around the electromagnetics and solenoids ( ie. the component windings of wire) .. then in tandem with an tube of chilled nitrogen * noble gas N2) to then aid in the systems functioning.... The N2 chiller the a refrigeration system allowing for the heat displacement from the condenser to transverse and heat the interior of the vehicle via heat exchanger.

Faraday cages surround critical components and also embedded in the hull of the vessel design to aid in the radiation insulation requirements.

Total down force off set by mechanical readjusting base "base point" with "lift"  to exceed gravity and weight of payload and vessel.