The following design system is intended to then use an arch over the highway to then "print" a contiguous arching tube to shield the roadway from rain ice and snow. The design also will prevent excessive fog that is a serious problem in certain locations. The width  "span" of the arch increases as per application also to accommodate the maximum height of the vehicles traveling upon the road way.

For a two lane two shoulder  high way the road open must me 48' to accommodate the height of  semi truck upon the highway shoulder, the span can increase or the form base shape can bent to vertical allowing vertical walls upon the outside perimeter of each highway shoulder. The arch base then increasing to aprox. 60'.

( http://www.designdeskinc.com/hydraulic-draft-cycle.html ) and the trucks that feed the plasticizer to the arch will also contain algae bio reactors atop the semi truck trailers. Within the semi truck trailers then exist the algae processing systems to cause the base structural material  ( algae plastic ), produced on site and at very low expense making the safety system then cost effective to implement.

The base arch then will accept a thin shell of concrete ( with water sealer ) atop to prevent uva uvb radiation degradation due to light exposure. the concrete outer shell may then be covered in thin layer of earth . The inner surface of the arch will also contain raised relief to then hold the exterior concrete spray in place while curing. This will prevent the deposition sliding as the concrete is deposited.

The "spray head's " deposition of the multi part component plastic the has a pivot head that will swing 180 degrees.

The "spray bar's" deposition then upward to the inner from of the arch then coated with a slick non stick surface allowing the plastic deposition to cool and rigid then breaking free as the arch advanced via it's motorized wheel system via pneumatic piston system lifting the arch form slightly.

The exterior total surface of the arch itself may be made to then act as an algae bio reactor itself with the plastics processing then at the outer base of the arch deposition system.

The water sealer top coat deposition system ( exterior of the arch ),  then as a motorized mechanism powered by (http://www.designdeskinc.com/hydraulic-draft-cycle.html), and will roll atop the cured arch with spray deposition system then to cover the arch span totally while rolling fully via curved deposition spray head. The feed for the water sealer then by truck that connects through cut hole in the arch with hose connector. The rolling motorized water sealer system then also with a hose reel to extend the reach of deposition.The water sealer unit is self navigating but must be monitored by worker...A leveling system will assist the unit stay atop the center line  "apex" of the arch  by correcting the "level / gimbal" of the system then correcting the units steering.

Driving in a tunnel produces turbulence in the air so  a venting system will cause a slightly reduced effect also then clearing the air within the tube.... systems powered by the above mentioned generator system that also powers the lighting along with the passive lighting in the side ports that allow venting of the country side without weakening the structural integrity of the arch as the window frames / open orifice ( if desired) are then increasing the anchor system upon the exterior of the arch. The window / open orifice cuts are made before the concrete deposition.

The arches anchoring system with wider deposition at the base of the arch, locking to the post hole footer then deeper than the frost line at the geographic location.  The anchor system the sealed by flexible plasticizer and buried. The system being a rain shield will still require additional drainage by powered pumping system via the fuel less generator that also powers the lighting preventing any hydroplaning.

A top coat of earth will then allow for the system not to be so  aesthetically obtrusive.  In addition to safer travel in inclement weather the design system will reduced highway maintenance cost preventing the requirement for road repair at high rates due to salt damage or freezing water cracking the Uv Light damaged asphalt.

The system is then sliding upon the trailer hauler's guide rail , when in operation then with the rail assembly being able to extend aft ... at the length of the haul trailer.  The end of the haul trailer then having a hydraulic foot " foot bar" stabilizer ( lowered / or inclining the rail assembly [ adjust for the road elevation]  by hydraulic piston assembly),  to stabilize  the extended guide rail that locks in the arch for it to process toward the forward of the haul trailed upon it self contained fuel less electric drive system.  Having the algae reactor arch then secured  "locked" into the rail then attached to the haul trailer allows for any high wind loading to not cause a hazard for the highway shield system when the deposition of the plastic is being deposited.

At the end of the  deposition "run" the boom arm with wench assist lifting the arch in tandem with the pneumatic pistons. Pneumatic pistons have been chosen due to the "quick" travel time on the  "lift piston" pneumatic discharge at faster rate than a hydraulic system for said application. The pistons lift the sub form arch printer off of the deposition to then reveal a plastic arch with raised relief upon the outer surface to then lock the concrete spray deposition in place along with the carbon graphite chop fiber embedded.  Usually concrete has  steel rod reinforcement but it decays "rust" concrete is porous... allows water seepage.. so we have chosen to use carbon graphite rods  produced in a trail truck then on site from the growth of algae as well. The carbon graphite rods are flexible  and will form a grid then atop the arch for the structural reinforcement for the concrete spray deposition.

To reduce cost of implementation the alteration of the design system then being the use to an algae derived plastic as the  "top coat" in lieu of the concrete. the spray system then having to slightly aerosolized  the plastic with chemical component derived from the fermentation of algae hull "spent husk post oil extraction in a methane digester / wood alcohol still.... This method the reduces the total cost of the improvement, allowing for  a greater and increased number of total systems implemented.

The system will contain an "automatic leveling " sensor system then positioned by hydraulic pistons causing vertical motion to compensate for the elevation of the roadway. Also a sensor system upon the terminal end of the plastic deposition bar will then sense the thickness of the deposit at the

buttress ( end of prior deposition / beginning of the next spray deposition ) to then cause the union of two arches thicker yet allowing for flex as the  weld between the two pieces is a different type of  plastic derived from the algae.. then having higher modulus of elasticity. The final spray jets ( sum of 4)  upon the deposition bar then will be able to articulate to adjust for the span  with the "flexing" deposition allowing for the total system to "heave" due to the freeze thaw and day light night time heating and cooling cycles.

The expense and construction of the advanced tool may then be offset by selling arches constructed as a addition to a stick built construction domicile ( ie within the stick built construction ), then to aid in weather resistance such as tornado and or hurricane ..for businesses or private residence. The arch then within the structure as not to alter the outer appearance fasad  of the traditional square shape of the dwelling. The "arch" then to act as force barrier... and anchor tie "locking" system then acting as a super hurricane "tie" then giving greater stability and rigidity to the structure.Additionally a wide array of plastic structural components like angle brackets for the studs then also locking the walls square and also to the arch itself will then be made to the plastic carbon graphite composite to aid the overall structural stability.

The design system may also be used to cause a raised road way in urban environments then correct the hazards for pedestrians at ground level. Parking then in structures such as parking garage. The advanced "road lift" system then would contain the reinforced arch of plastics with openings for pedestrian plazas / walk ways / outdoor dining / even garden spaces... The arch then so that a flat road  "roof would be placed atop the arch supported by the base structure then reinforced with concrete. the "road lift" system will then also contain an additional arching "roof" above the road.. A double deck road with the cars then  separated from congested intersections. 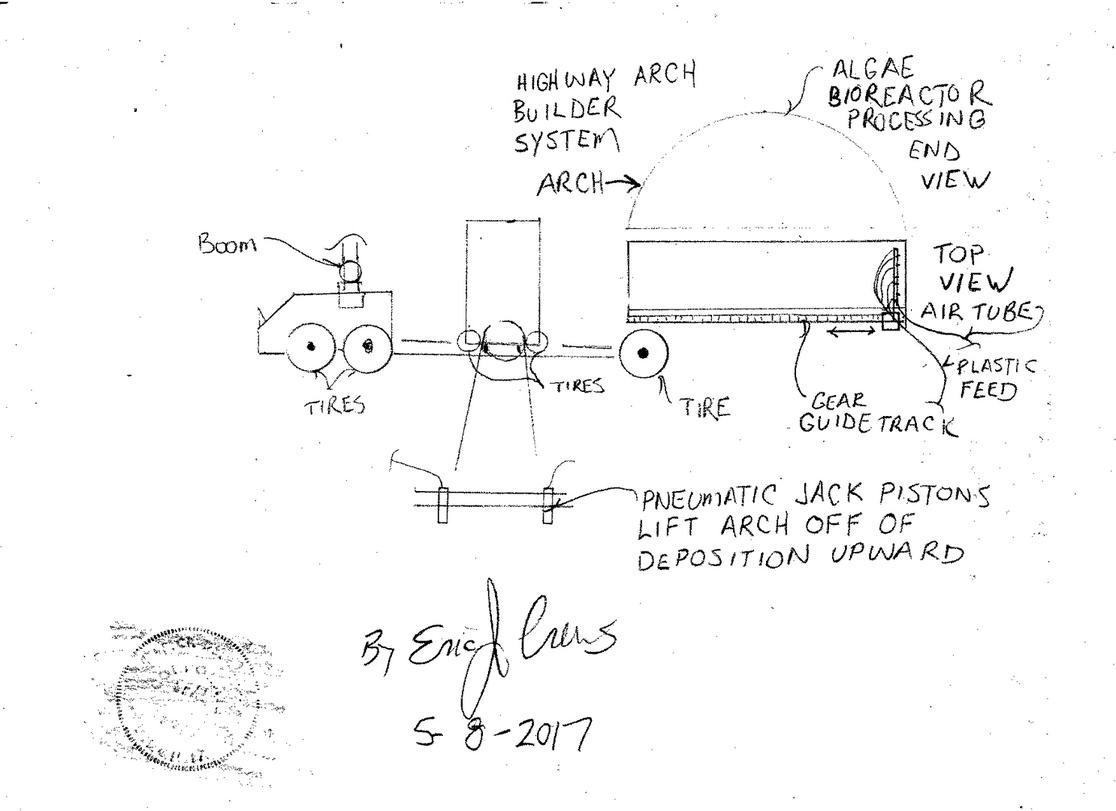 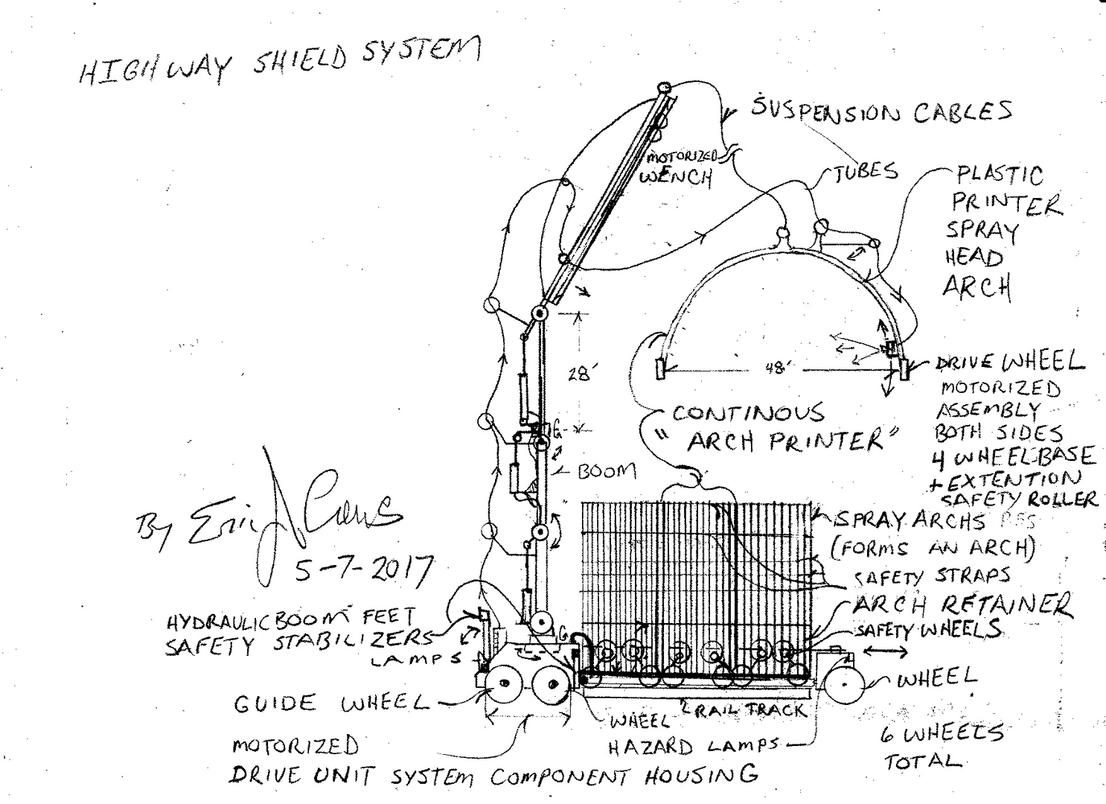