The High Voltage (velocity ) Perpetual Electric Motor System   ( H.V.P.E.M.S. ) is a design that is intended to cause a self charging electric motor system that will provide for unlimited range electric automobile and or a mechanism to drive multiple industrial size electric generators (via output drive shaft number 2 )or any other application for industry that requires rotational motion. This system can also be applied for fuel less pumping and water purification ( reverse osmosis or fuel less distillation ) to provide clean water from salt water or contaminated water sources.
In addition this system may provide motive for flight drive system for designs such as our "firedrone" http://designdeskinc.com/Firedrone.html . The system should also provide enough electrical current to power the high pressure water pumping for forest fire suppression. Note with an addition of multiple power sticks the design could also be used for hover landing systems for large aircraft. This would increase safety for many in critical situations. This system is also suitable for electric farm equipment . tractors  ( electric motor driven P.T.O.), combines...etc...

This system is a  Dc / Ac combined  system but can also be all Dc (direct Current) omitting the Dc to Ac current inverter and replacing it with a voltage regulator then the output of current would then feed the processor / mapping / logic control board and electric motor number 19 then the rest of the circuits would then be the same as described.

From the on switch in the instrument cluster / on switch..activates the control processor / switching board number 15. 15 is energized and activated number 22 than allows feed current from the battery, into number 22 then inverting the Dc current into Ac current and then into number 15.

The logic control board in number 15 then controls the current feed into numbers 19 and 20.  The stator in number 20 will be slightly less current than the feed current into number 19.

So number 19 is motoring causing 60% to 80% of current level output in number 20  compared to the input current level into number 19.  Number 20's current output is then fed to number 15 then number 14 and into the main high voltage electric motor number 13. As an example ..If the electric motor 19  is powered by 100kw and the generator, number 20 is then producing 80Kw and that current is powered to number 13 ( at "idle" of 800 R.P.M. ) with number 13 also rotating via drive shaft into number 16 causing 15 times the rotation then in number 19 and number 20 then the current level in number 20  is increased because of an increase in rotational rate. Then the higher current level post number 13 then feeds the "reducer" electric motor number 19 a higher electrical / electromagnetic "pressure" to increase the "tilt" and at that point the battery feed current is shut off then the battery is then being charged by the 12v Dc systems.. The "motoring effect in number 19 counteracts the resistance produced while generating in number 20 and effect of resistance from the increased ratio gear set number 16.  The stator / field coil in number 20 can increase as well but is not required past a certain level as there are speed limits.....:)

The current feed from the battery is in the off position when the system is in operation and will be being charged by the excess current produced from the systems operation...

"Hot" negative return from number 13 flows through number 14 to number 15 and replaces the battery feed current into number 19 and magneto /stator feed current in number 20 allowing for system rotational advancement and greater speed. Or as an option the hot feed post rotational rate and effect of 13 motored into number 16 causing 20 to reach a higher current level.....20's  output can be split out of number 20 regulated in number 15 and then to increase rotational rate of number 19 as proportional incline.

Since number 19 is "tilting" number 13 the current produced in number 20 at rate then causes greater rotation when number 20's current is fed to number 13.

So for every one rotation of number 13, 15 rotations will occur in number 19 and 20.  This will constantly produce more current than the main high voltage electric motor is using.

Number 13 also by drive chain sprocket system will then rotate the transmission and propel the automobile.

The hot current  feed into number 20 is connected to a magneto producing Ac current to feed the stator / field coil for the generator number 20.

Ancillaries may be added to the drive belt system such as power steering pump...air conditioner compressors power break pumps...etc.....for quick release and "engine" / motor system exchange or replacement , the design will be able to be extracted upon a slide rack then detaching at a drive shaft junction before the transfer case number 21 and also upon the front drive shafts number 2. The wires will be unplugged where required  when this operation is occurring. Also there will be a universal joint post number 21 on the rear drive shaft number 3.  Number 2 will also have a constant velocity joint on the terminal ends of the drive shaft number 2 post mating flange (bolted dual plates..secure to the drive shaft).

There are three pathways for low tension 12v Dc production for battery charging should the alternator fail...from the alternator to the charging system in number 15 then to the battery and / or....the circuit  then routing  through numbers 34   ( transformer ) and number 35 ( voltage regulator) then back into number 15 because number 15 also contains the battery charging system and associated circuits to charge the battery number 23. The "hot" circuit from number 35 to number 23 is a trickle charge  circuit that will occur should the battery charger in number 15 fail...battery level then monitored in number 22 and reported to mapping logic board to then be controlled and turned off when maximum charge has been attained..it will have indicator light on dashboard.

*Note - number 26 then also with http://www.designdeskinc.com/cross-pump-generator.html ( it's a small battery

to then actuate the cross pump generator within a slide drawer for ease of maintenance). 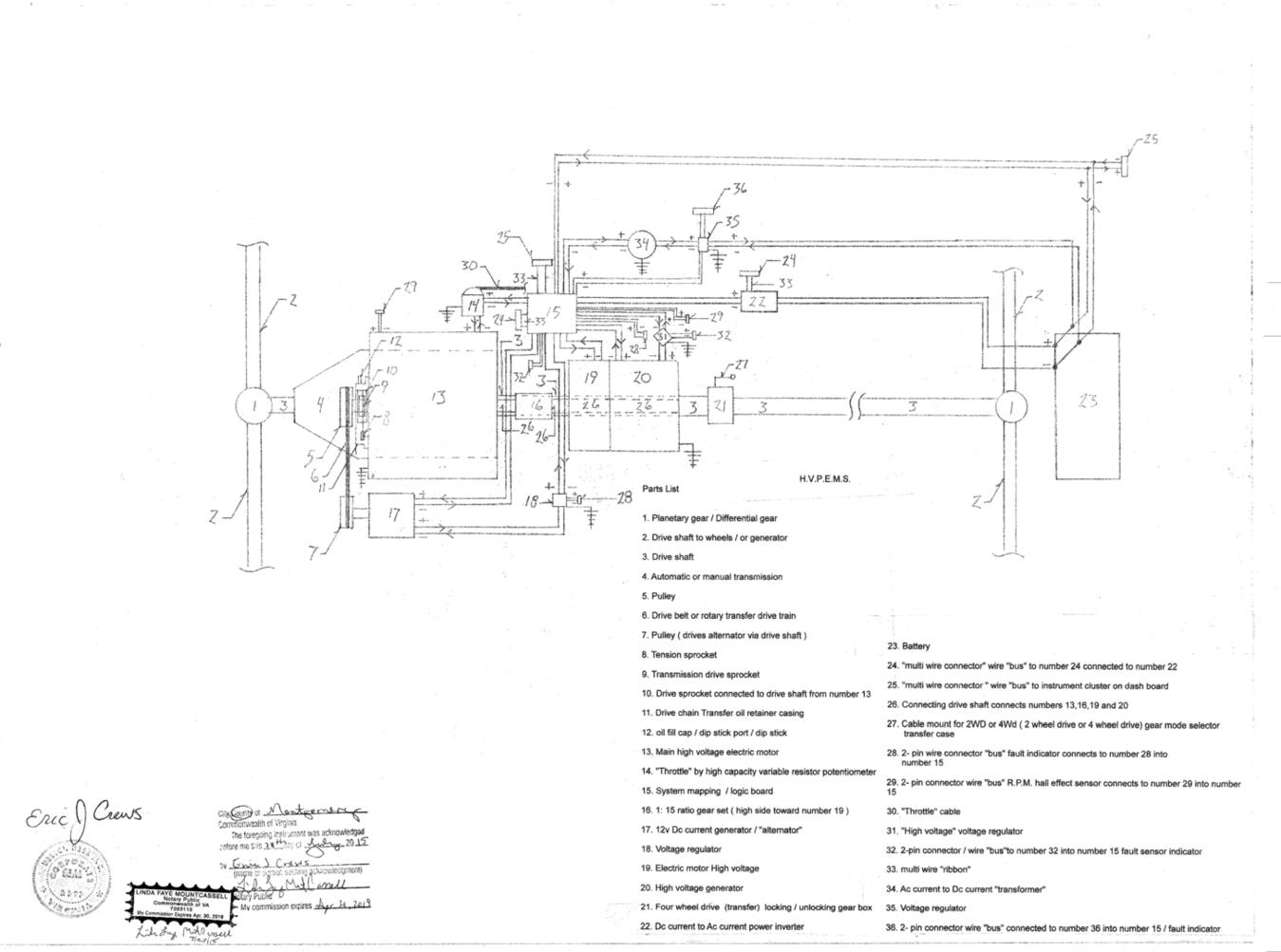