This design can be implemented for a personal hover system sum of  three systems (dual.. ie. two triangles with jugs at triangles apex  )  arranged behind you three systems dual triangle,  in front of you all vertical vectoring downward. The sum of eight systems ( in pairs of two) about at square points as viewed from the top to cause horizontal left and right vectoring within the horizontal plane and the addition of four additional systems Two per side ) that rotate 360 degrees ,  to advance the system up, down ,forward, and reverse....... this modification may also require the modification of number 5 so that it becomes with the addition of number 12 from http://designdeskinc.com/Sealed_Force_Vectoring.html   , with 12a then converted into generating propeller assembly feeding electrical current to number 12b and or other craft functions as the flow tube generator will produce more current than required....

The air pressure bottle opening ( air pressure bottle top "throat" will then be increased in diameter to accommodate the addition of the "power compressor" . The additional "power compressor" can the also have it's power feed come from an additional pneumatic impeller upon the lower velocity pneumatic flow tube then gearing to drive a high voltage generator ( Ac or Dc current ..both work..)

The steering system then by steering wheel the positions the "Gallon Jug"   system within a mobile ...within the center ring ( sum of three rings then able to spin 360 degrees with rotational points upon opposite quadrants and then off set with in the next interior ring then by 90 degrees then again repeating for the inner most ring that mounts two "Gallon jugs" ...."spherical positioning" with electrical current transference via slip ring and positional motivation by electric servo electric motor. sum of two. (  mobile systems sum of two .  ie. one in front and one in back ) .

In the picture directly above number nine is listed as an air compressor please read it as number nine..there is a squiggle from incomplete erasure..but the number is a 9.

The altitude is then adjusted by a "lift"lever separate from the steering wheel. The slowing  breaking system will then have twice the stopping force at its maximum with four "gallon jugs" then causing vectoring  to slow the vehicle. It may be required to add an additional electric motor to number 13 to increase the decompression in the lower "Gallon Jug" number 3...the electric motor then tandem with the low side of the ratio gear set number 13.

Possible accident avoidance system making the hover cars sense each other to then fly over and under one another to avoid collision.

Four systems that have the ability to tilt and angle the discharge vector may be attached to a Passive Water Condenser...to rain over crops like a remote control hover toy  by radio...to control flight dynamics.......

Heavy weights may require larger bottle  ( number 3 ) with increased pressure confinement ratings...
* Note - The displayed system should be insulated to prevent static electricity from shocking to the touch..and also electrically grounded..... to a  box of dirt....insulated...

* Note - Pneumatic flow tube post number 8 in the lowest drafting can then also be as number 4 (  an additional pneumatic coil ) to also increase  the offset of the static
( not electricity ) effect of pneumatic  flow.
* Note - From number 10 to number 8 is a number 18.... ie. flow pipe

* Note - Numbers 12 and 13 also contains an internal pneumatic impeller then being connected to the low side of the ratio gear set then being motivated by additional pressure cycle flow who's velocity is derived from two components "Z" upon http://designdeskinc.com/Tri_-_Plex_Lifter.html. One component "z" is then pressurizing air into numbers 12 and number 13 to cause advancement the second component "Z" is then pulling the pneumatic flow and re packing / re- filling the additional pneumatic pressure storage containment air pressure tank. One way flow valve is also upon the tubed pressure flow system so that the additional pneumatic pressure tank does not vent air pressure in the incorrect direction ..one way valve then placed post second component "Z"  also before the air pressure then vents into the pressure storage tank. 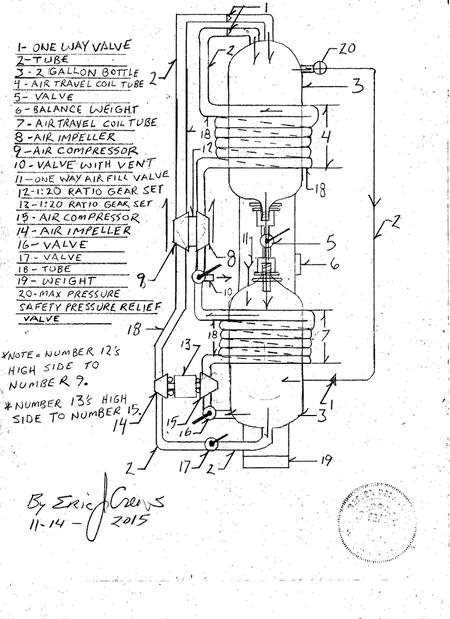 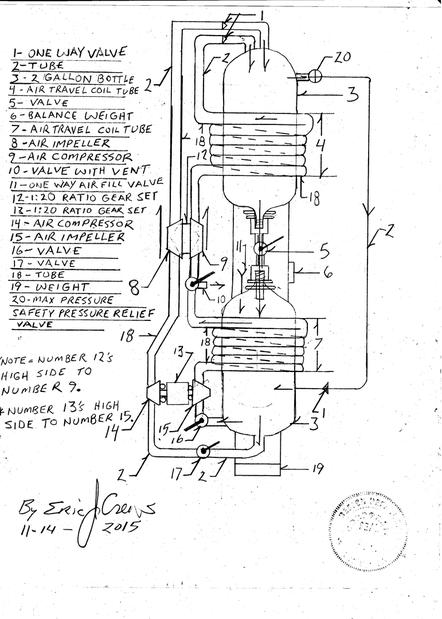