Currently Municipalities have serious financial conditions keeping up with certain civic functions like plowing snow. This design may solve the problem by removing the fuel cost associated with snow removal. The following design used as a cargo transport vehicle ( box truck ) will then reduce the expense of fuel associated with long distance travel. The system uses a "non flammable" - "non electrically conductive",  hydraulic oil such as "silicone oil" as a  "work" transference medium.

6. start valve also function in "run" mode allows for external venting if the valve is positioned in the correct position increases

number 10, out put rotation tandem with the armature of the magneto and the internal "wheel" of the drive line pump / impeller, number 7

magnetic clutch system that is electrifies by system initial produced electrical current.  The electromagnetic "slip clutch" is used to fine adjust the

final out put  speed of the ratio gear set motivating number 13.  The electromagnetic clutch's electrical intensity being governed by the

18. automatic gear selection transmission - 0.5: 1: through 1:50 ratio with the "fifty" being  tandem to the internal hydraulic pump's wheel

processor - mounted upon the top of the vacuum / oil tank

numbers 91 and 92 at the correct operational level

40. lamps sum of four total across the top of the truck cab equally spaced

48. external wind shield forced air windshield blower bar  vent along the base of the entire windshield- causes rain to not

52.  seat back rest adjustment dial changes the  "tilt" of the back rest upon the seat

55. front disk break assembly then mounted upon the transference gear assembly accessible from the "grill flap"

system subsequent  "re-start". The air compressor is not required to "run" all the time only to maintain the air pressure in the

( iron bar link travel limiter ). The iron bar containing bushings to prevent the link from damage between the iron bar and travel re-stricter.

104. tread track weather system raises and lowers to climb out of high snow or mud powered rotation of the tread track by both

111. oil fill cap vacuum rated with gasket and one way valve to cause the initial "start vacuum"

117. "start valve"  multi position multi port  ( to and from number 7  inflow and exhaust from number 7 exhaust used when filling

121.  "draft control valve assist in vacuum / pressure  control and is used to control oil levels within the  oil holding tanks numbers 91 and 92

125. "hydraulic draft" by-pass valve - used when shutting the generator system down valve controlled by the logic circuits in unit number 1. The

draft effect produced by number 15. the valve will also operate as a safety fault valve then receiving electrical signal to open or close due

to excessive speed of the generator by referencing the revolutions per minute sensor, number 20

126. rubber bumper for the hydraulic piston

Letter "B"-  air pressure pipe or flex hose connects to "B"

The above design system is an "active power plant" generator system that provides unlimited electricity production using a "hydraulic draft effect" of "pressurized" fluid, to then, produce electricity allowing the electrification of the forward electric motor and automotive transmission system that moves the vehicle.  The air pressure cycles and vacuum is sustained within the system to allow for low cost transport of commodities preventing a transportation collapse due to the advent of Peak Oil avoiding hyper economic inflation and massive economic failures.  A correct replacement for the internal combustion automotive engine with superior service.  A battery less electric vehicle that never needs charging.

The system generator is started by the pneumatic decompression traversing across number 7 controlled by valve, number 117, with valve number 6 positioned to "open air" vent. The pneumatic impeller, number 7, then producing rotation of the drive assembly containing the magneto that produces the initial electrical current that is then applied to the logic mapping system control electronics that causes the electric hydraulic oil valves numbers 121 and number 122 to open. The pressurized hydraulic oil then vents to the vacuum chamber of the oil vacuum tank, number 91 also causing electrical production in number 19 with the produced electricity then applied to the electromagnetic clutch in number 12. The electromagnetic clutch in number 12 then works in tandem electronically, with the information from the oil level float system's in the air pressure tank / vacuum oil pressure tank, then governed by the electronics logic control circuit board. This maintains the operating oil levels in both oil tank systems.

The oil is pulled from the vacuum tank at the "main line hydraulic draft rate" then to return under pneumatic pressure in pressure tank , number 92  to once again cycle within the system producing electricity. The valves numbers 117 and number 6 then return to their "run" position to then maintain the vacuum level in the oil vacuum tank , number 91. The pneumatic oil pressure tank , number 92, then has the air pressure also maintained by the vehicles forward electric motor assembly by the system's drive belt driven piston type air compressor. The pneumatic over pressure, in number 92 will discharge via pneumatic over pressure safety valve and for the oil vacuum tank (number 91), the max vacuum level is then maintained by the vacuum safety air inlet valve sensor number 35.

When the design is in  "run" mode the fluid "pull" from the oil / vacuum tank then increases the vacuum level by the subtraction of oil from within the tank.  The oil then filling the pressurized combined component air pressure and oil pressure tank.  The oil is able to return to the tank, number 92, due to the state of matters  "phase".  The oil acts as a solid and the pneumatic (air) pressure then "flexes" slightly allowing the oil (fluid) to act as a solid refilling the pressure tank, number 92.

The vacuum / oil retainer tank allows for the air pressure to discharge post traversing a pneumatic impeller causing system rotation, to then cycle the potential between vacuum and pressure with hydraulic acceleration as hydraulic fluid in confinement pumped in this fashion causes

The produced electrical current from number 19 is able to be "re-introduced" into the rotation of the generator system by the electrification of number 10 and number 16.  This causes a speed incline atop the fluid draft effect then producing higher rotational inertia then able to yield higher rotational torque to increase electricity production.  The final rotational adjustment  then allows the valve number 125 to open lessening the hydraulic draft effect and in small electrical increases brings number 16 to cause a stable  "system idle".  The design is "load reactive" so that when the main vehicle's electric

The system is a differentiation system causing motion of pneumatic pressure into negative pressure (vacuum) to then produce rotation. The design implements the state of physics. ie... the "phase" of mass to then also obtain it's objective.  Liquid under pressure acts as a solid and when using a preceding hydraulic impeller the hydraulic pump number 21, will cause mechanical rotational advancement by "suction" of the pressurized fluid.

The initial pneumatic pressure that causes oil pressure then counteracts upon the magnetic field resistance produced from the mechanical gear set and traversing magnetic fields in the generator.  The design balances it's internal working medium (oil, vacuum, fluid pressure and fluid suction effect), by the design's sensors and electronic logic circuits the in assistance with the electrical reintroduction circuits that cause a percentile of generated electrical current to then be applied back into the system's electric motors to perpetuate rotation and produce continual production of electricity.

The system will produce excess electrical current so electrical regulation equipment must be within the required operational parameter.

steering alignment (castor, camber and tow), then attained by the cross bar that stabilized both front wheels providing an

alignment point to correctly  "tune" the wheels... the front tie bar then also the "forward" suspension mounting for two

pipe while the system is instructed / caused to "shut off" also acting as a safety feature to prevent fluid lock. This feature is controlled by an

draft impeller number 15.  Number 16's current level can also be increased to cause a slowing effect when shutting the generator system down.

low level Ozone. The forward electric drive train and generator system are electrically insulated from the chassis of the vehicle and are sealed

for weather.  The generator and electric automotive drive train are also monitored for inductance of electricity and de-energized by the

main logic  electronic circuit board, to cause stable system "idle" then reactive when loading is incurred to produce continual electricity

for "active" electrical power to electrify the vehicles main electric motor.  The logic board  / mapping electronics will also indicate "fault"

circuit with dashboard lamp warning to indicate that service is required while automatically adjusting the system, should it be required, as

* Note - the pressurized oil traversing across number 14 and number 15 causes, by rotational torque,  the main generator drive line to produce

increased rate of rotation for number 21. 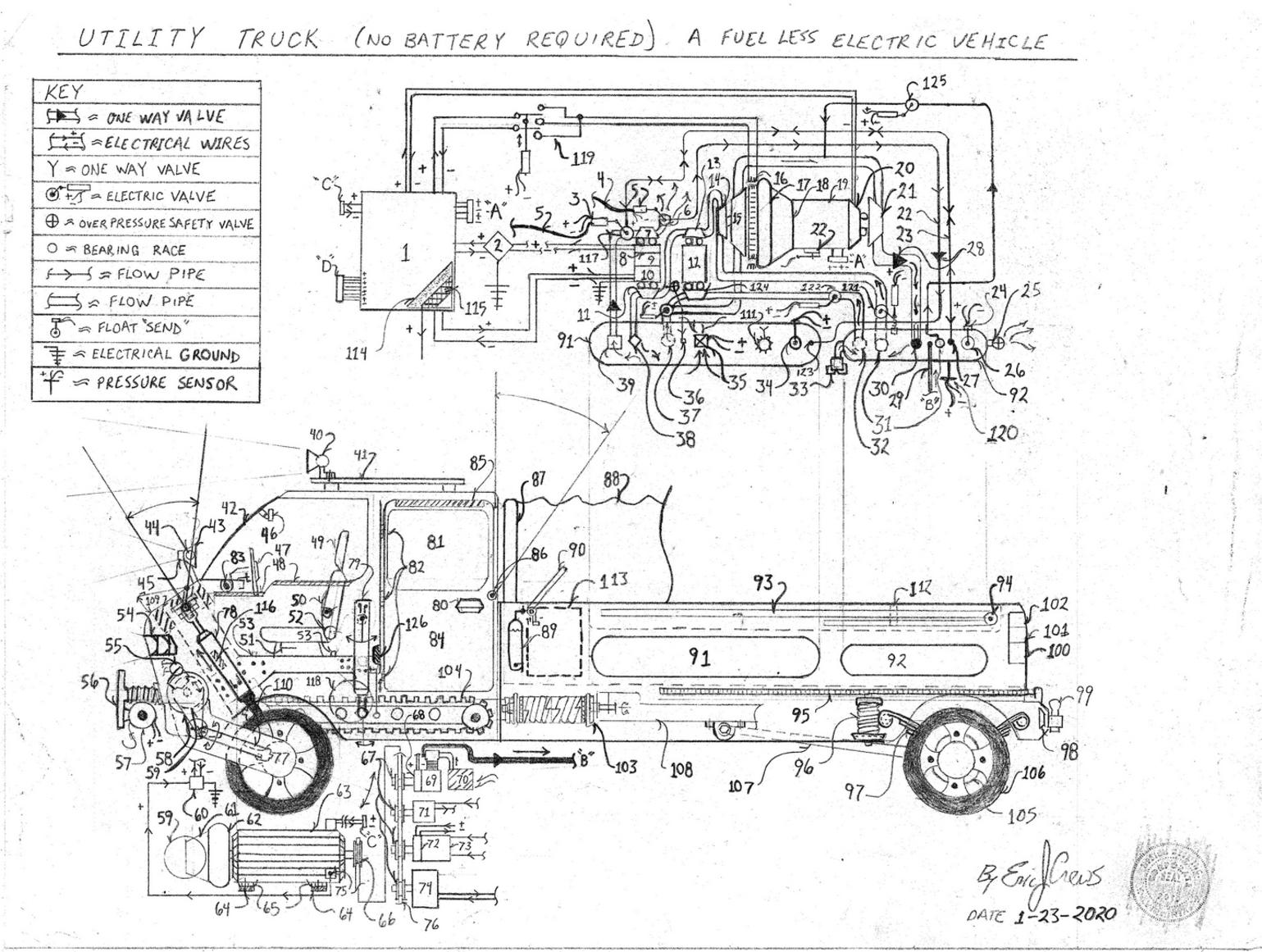 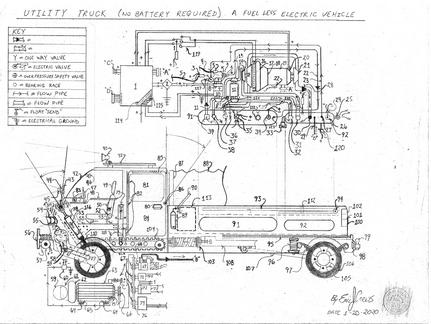 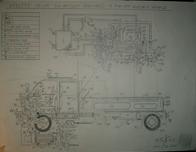 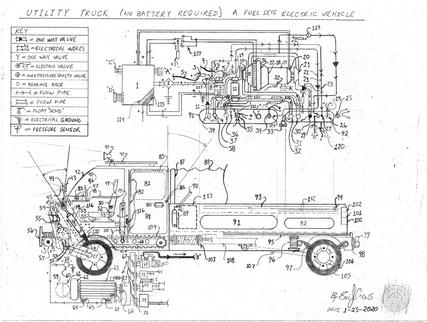 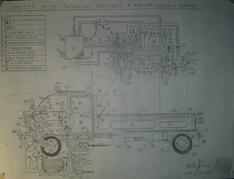 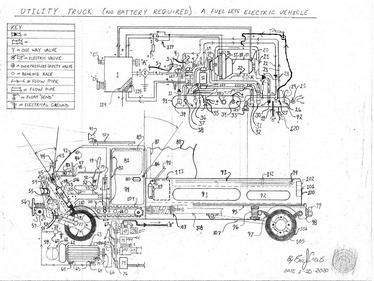