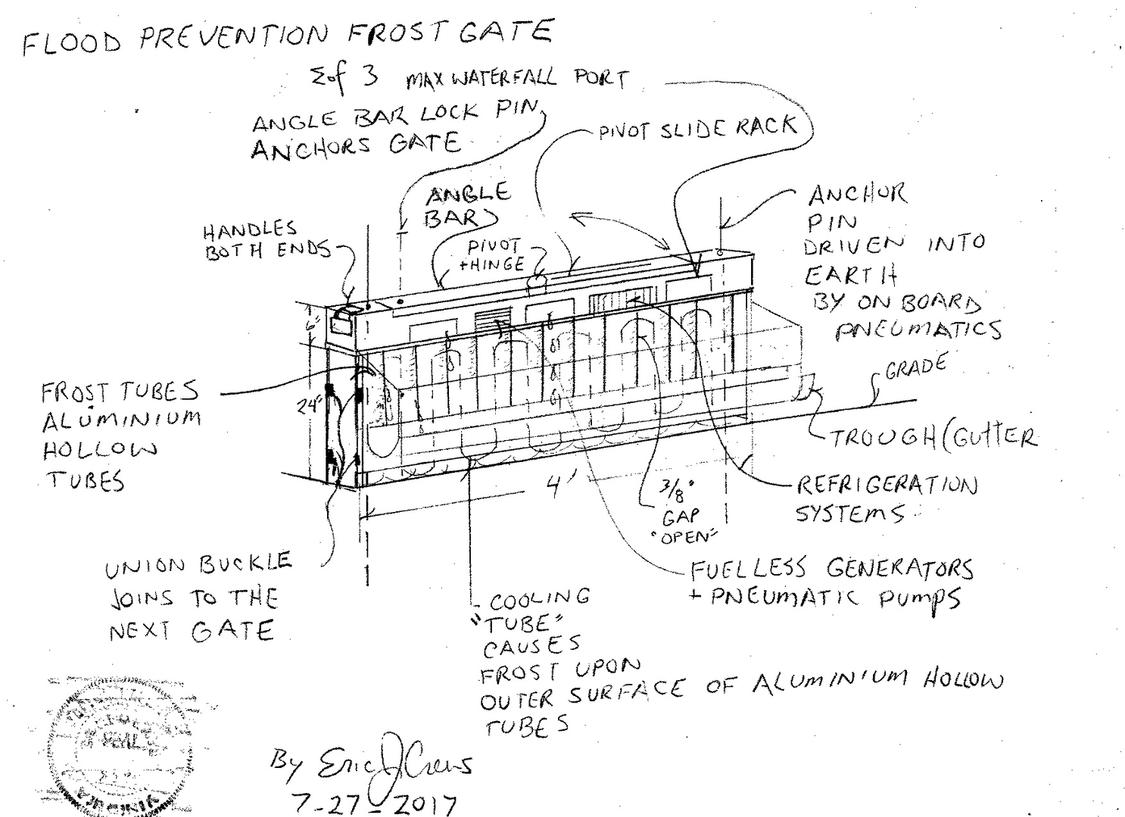 The following flood prevention system is then intended to replace sandbagging when floods threaten low laying areas. The design systems are relatively light weight then being made of Aluminium and contain micro cooling system to the freeze the water flowing through the slight gap between the metal tubes... this is a controlled freezing to allow an ice dam to form allowing water to then enter the catch trough then wicked out / pumped out by high capacity fuel less  pumping.

center ( for the frost gate ) then filled with sand to then be quickly placed... this saves time when flood waters are approaching..and when speed of barrier construction is required to deal with an approaching storm it does make a difference.

The "dry side" of the frost gate base weight will allow ice  formation upon locking extender grid  ( adds weight) , to assist in the stability of the position of the frost gate via  block ice forming from allowing chilling of water atop the extension of the "dry side" of the base weight. This will counter act the lateral force of the flood waters.  The "anchor grid" then attaches to the "base weight" and is supported off of the surface of the road/ ground then slightly ... the "frost gate" will the allow venting of super cold air atop the "anchor grid"  with water then being sprayed upon the "anchor grid" to add weight to counter act the force of the water to keep the "frost gate" from moving.

The above design system then will contain holes within the trough then being a 1" hollow open space between the perforation top side of the trough and a solid lower trough.  This allows for a filter effect with the final end to allow high speed water extraction via two end trough  pipe couplings. The trough's terminal end the will also be able to dump water directed to a storm drain via flex hose then affixed to the last trough in sequence  or then by pumping system  fed to a rapid rate snow blower system.... to then mist the water and freeze it as snow. ( also powered by fuel less electricity ).

This allows an extension of time slowing the water way basin water level.  The snow upon the bank then slowly allows the water to flow into the  "river" preventing the flood by the snow upon the river bank melting slowly. Preemptive lowering of the tributaries by the fuel less snow blower may also assist in total rain fall control then keeping the river in it's basin... allowing for less frost gates having to be placed...

The design could then positioned across rivers  even those with large width span to then be upon a height adjustable system to then be raised and lowered when actuation is required before heavy rainfall occurs then lowering the rivers to cause them to be able to handle the additional water flow.