This system is intended to cause the reduction of flood waters in two major methods. First by lowering the tributary head water at small creek inlets into larger river streams it will allow for heavy rainfall to not exceed the river basin's capacity to hold the heavy downpour.

In addition the urban environments can then also be addressed as the road ways become impediment when flooded this occurs annually and the civic institutions have yet to correct the conditions due to lack of funding said improvements.

This system is intended to cause the reduction of flood waters.
By lowering the tributary head waters at small creek inlets that feed into larger river streams, the fuel less pumps will direct the water to buried containment reservoirs. This allows for heavy rainfall to not exceed the river basin's capacity preventing flood insurance claims. The system may also be applied to Urban environments to keep the roadways free of flood waters.
The fuel less pump’s excess electricity may then be sold to the municipality to offset the cost of installing the advanced system.
The design system will save money on the electricity for street lighting, snow and ice removal by installing heated bridges, roads and sidewalks.
The addition of the “Sea Trough” design system, then incorporating the flood control pumping system, will assist in prevention of beach erosion, also avoiding  real estate damage due to storm surge.

So with that observed suggestion ...Save money on the electricity for street lighting...snow and ice removal...then budget to purchase these advanced pumping systems to the better serve the public providing a safer environment.

* Pneumatic pressure injection along the length of the exit flow pipe may in fact increase the final volume out flow of number 39 due to the decompression / expansion of the air bubbles then with in the out flow increasing the total length out flow volume of water...

* Note - installment, according to increased volume requirement, will then be as follows; placed at listed location; a hydraulic impeller on intake tube into number 14 connected to ratio gear set at 1:4 gearing with the high side to an electromagnetic clutch then locking union...( energized clutch ) will then shaft connecting to number 18 . This augmentation requires also another max pressure safety valve and reporting sensor on the flow tube  ( pre number 11 post number 15 ) with large diameter vent tube from the additional max pressure safety valve then venting into the combined oil air pressure pressure tank and double fault sensors because this causes rate compounding  ...

* Note - Adaptation, from flow tube post number 14 a split pipe then channeled into and additional hydraulic impeller also then connected by drive shaft to number  15 will allow for the "weight" of the ratio gear set number 16 to become nullified / counteracted. the additional flow tube will then exit the addition number 11 connected to number 15 and vent into the combined pneumatic / hydraulic oil pressure container with a specialized discharge port within the combined pressure tank...a Max pressure discharge valve will cap the end of said additional pipe and on the flow tube before max pressure valve within the combined pressure tank an injection flow tube will branch of the additional flow tube and inject the hydraulic oil intake so that a pressurizing / accelerating effect is caused by spiraling hydraulic flow acting like an Archimedes screw then also by adhesion cause greater velocity. If this augmentation is implemented an additional Hydraulic pressure sensor ( safety fault and all stop and regulation function reports to mapping and logic processing ) will need to be installed upon the Hydraulic discharge tube from the combined pneumatic / hydraulic pressure tank. The then coiling discharge flow from number 35 will be so that the coiling flow will merge within number 7 " compounding venturi,  producing minimal turbulence within the "funnel" / venturi ...ie. the oil flow streams merge smoothly.

* Note -  Note for number 55 air filter intake  since the suction......air intake...into the exciter assembly "X" is high velocity  the intake system must cause diffused intake flow like a vertical tube 12' - 14' high with holes  of adequate diameter 1.5" - 2" along the top half of the vertical tube, with rain proof capping,  within a heavy screened cover that is expanded  in diameter from the diameter of the vertical intake tube. The difference in sized / diameters must be so that it is bird safe so if wild life lands upon the Heavy screen "cage" then no harm comes to them..by the air intake cause by number 4.

* Note - "B" then also being B ing :) haha installed upon cross pipe intersection upon the drafting at  pipe crossing upon number 22 post number 14 and pipe crossing  upon flow tube number 22 post number 11....so that the high speed flow post number 14 then feed the fluid velocity to number 17 upon "B's" assembly and the flow tube from number 11 will then be the inlet to number 18 upon "B's" assembly causing greater velocity of oil flow for the generator producing more current to power the electric assist motors and the electromagnetic clutches. Number 15 on "B's" assembly is then as an oil repack pump system so that maintenance can be done upon the system also filling the oil reservoir at shut down to prepare for the next restart of the system by emptying the flow pipes and number 7. "B" =  ie.... = "Crosspump"

* For Tsunami prevention alteration -*
The system may also be utilized upon Buoy's to then suck in ocean water  at a shallow depth to  then cause high pressure out flow at depth , in dispersed pattern,  to disrupt a Tsunami wave by disturbing the wave with the injection of turbulence. Many buoy systems may be required as well air bubble injection systems in tandem with sea shore fuel less installations to then pump flooding at high velocity in conjunction with earth works to then channel the flooding then made cost effective by the fuel less heavy equipment earth moving bulldozers and transportation equipment ie. dump trucks, bull dozers  etc...

The Tsunami wave alteration system will then cause the wave to be split apart then causing lower wave levels  upon the shore by then staggering the total energy of the wave causing less height of wave upon the beach. 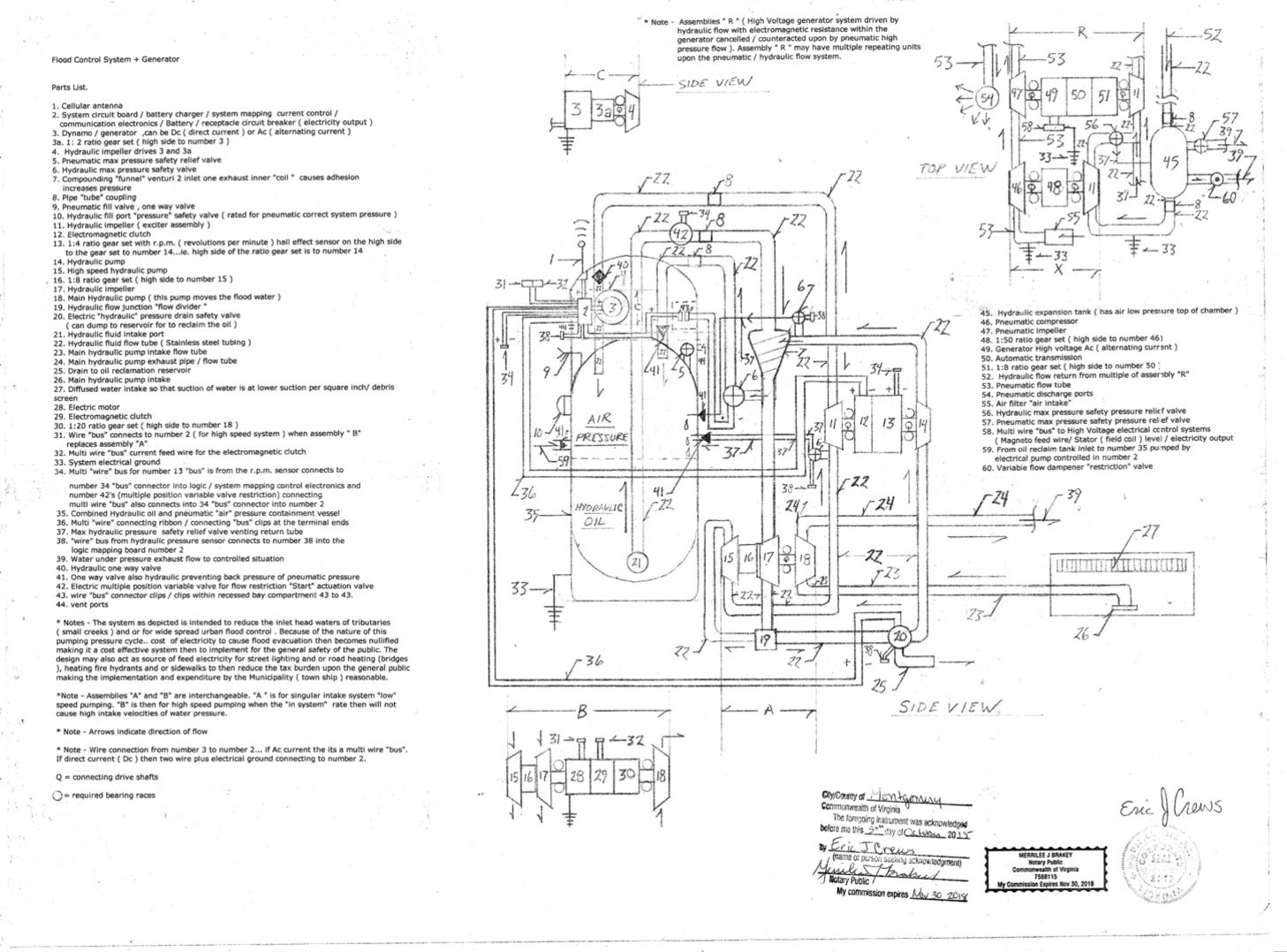