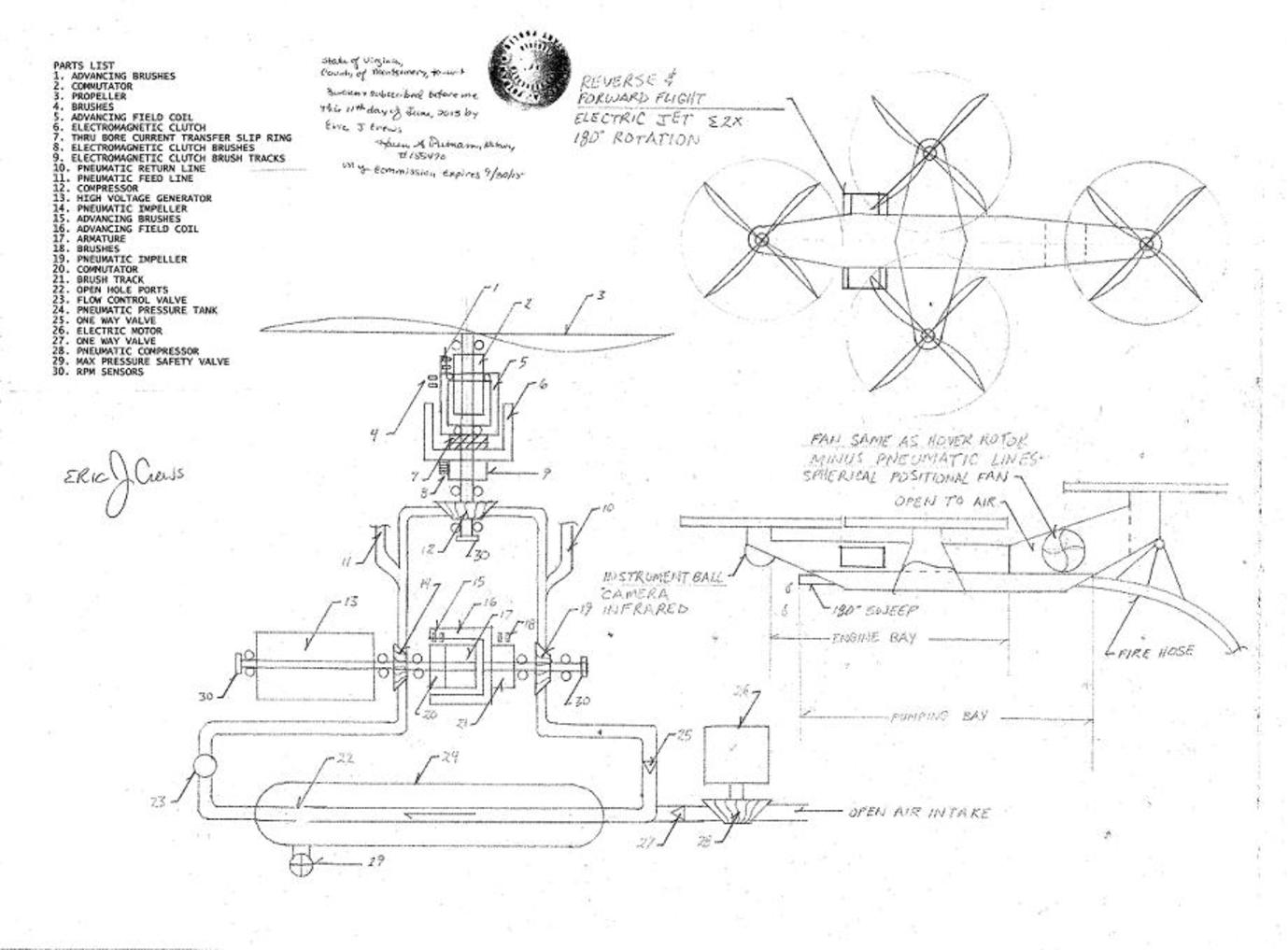 Firedrone is a concept that is an advancement in fire fighting equipment.  It is a self sustained electric /pneumatic unmanned hover drone used for forest fire suppression.

Currently the equipment used for aerial suppression of wildfires puts the pilots in danger and delivers intermittent  suppression of the fires.  This concept allows for the hover craft to carry a fire hose that will deliver a constant stream of water to quickly suppress the wildfires. Multiple units may be connected to fly in tandem then feeding the water from "unlimited" source.

Since the system is fuel less it will also be able to hover for long periods of time. It will contain a start battery.  The redesigned electric motor driving the hover propellers has an advancing field coil dragged by  an electromagnetic clutch with a thru bore current transfer slip ring between.  This allows for high rates of rotation on low input current.

The hover propeller assembly is also attached to a pneumatic centrifugal compressor.   The pneumatic flow from the pressure storage tank impales an impeller attached to a generator and the flow post compressor impales an impeller advancing the field coil of the electric motor driven by the generators output.  The system contains two generator assemblies feeding four propeller assemblies two electric jets and spherical positional fan.

A  pneumatic compressor driven by electric motor pressurizes the system from open air  should the system start to leak air pressure.  The lower bay of the craft contains the high velocity pumping system.  Over rough terrain multiple aircraft can be used to carry a very long hose that is connected together by the aircraft. The "Firedrone"  will also contain a "Start"  generator (depicted on our site under any fuel less motivator / or other fuel less generator system).  The compound generator will assist in start up current and power the water pumping system.

Due to the nature of this forest fire suppression system a large amount of water can be delivered unto the fire. Think about how much water is actively effective when extinguishing a wildfire....the diameter and rate of flow of water. This system allows for increased deposition 10+ fold....and by advanced pumping implemented a rate increase will also be attained.

This design is suitable for Search and Rescue situation as the mechanism can remain air borne for longer periods. The system may be suitable for implementation by the Coast Gard.
It may also be useful for tree planting by aerial methods. ....

The primary problem with using helicopter like air craft for wildfire suppression is then the air crafts effect of fanning the flames with the discharge of the air displaced by the flight system . The primary lifting system for this design is then listed at http://designdeskinc.com/Hover_Motor.html . The propellers will then be able to auto rotate as well.. like a parachute...