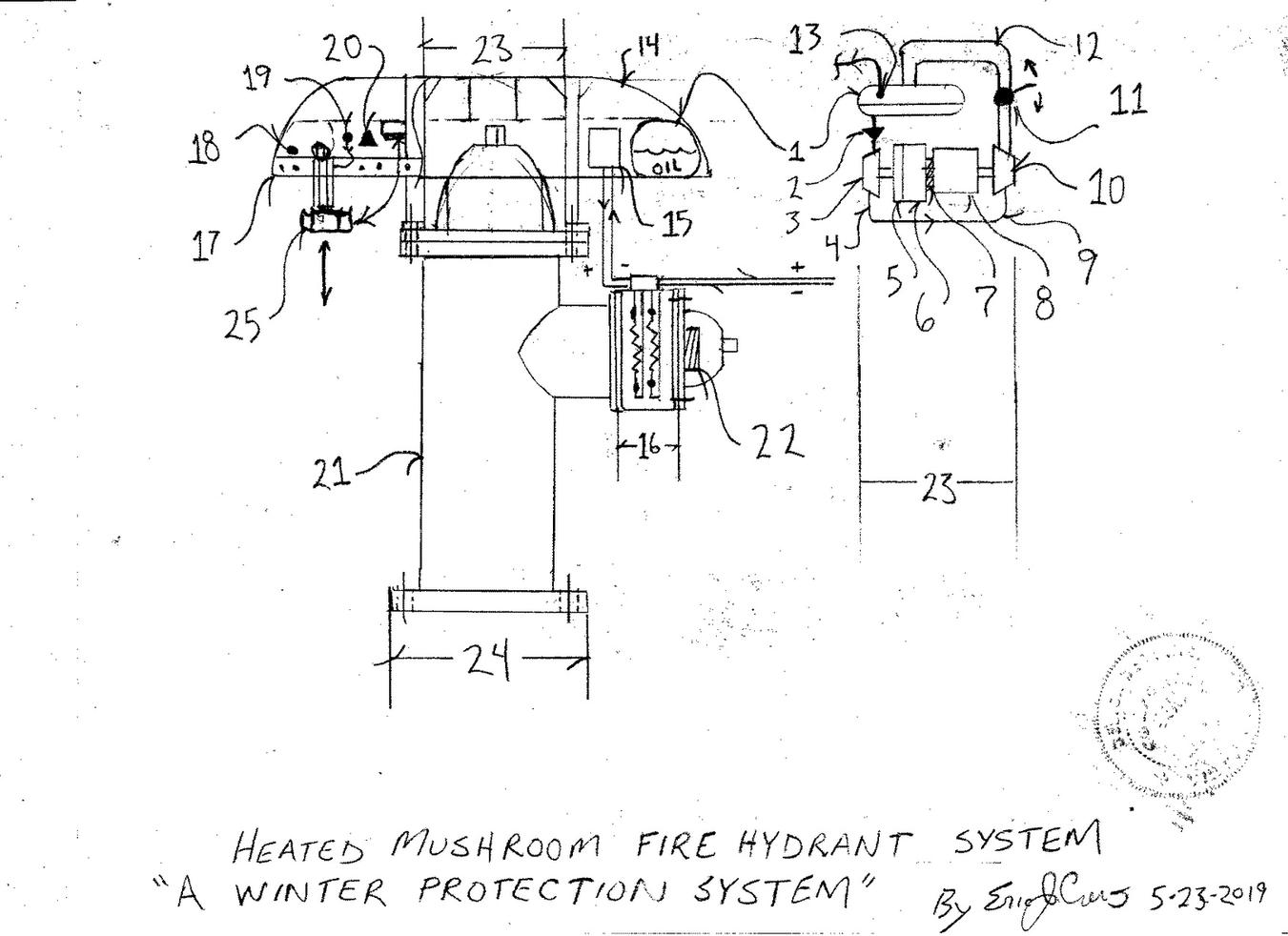 The following design concept is then intended to heat the fire hydrant upon a fuel less generator with the capacity to also prevent the water hose from freezing when in use. The generator is then motivated by vacuum producing electrical current to heat the hydrant mushroom cap itself making it easy to find in high snow storms and preventing internal icing upon the hydrant. The unit also heats the advanced fire hose via electric resistor.

of number  5 and output  ( high side ) rotation tandem with the hall effect R.P.M. ( revolutions per minute )

sensor and armature of the P.M. ( permanent magnet dynamo ) and internal hydraulic "pump wheel" of the

electrical contact points for immediate hydraulic actuation in the generator cycle, ie... so that the fire

cause stable instant electricity production if the vacuum cycle in not already in operation.

The valve number 11 is then opened and due to the volume of oil in the larger return oil flow pipe causes inclined velocity of oil drafted across the hydraulic oil impeller number 3. The resistance in the ratio gear set is then counteracted upon by the  "basal pneumatic vacuum level as well as the resistance produced within the dynamo / generator.

The system will then be caused to continue to "run" due to a percentile of the generated electrical current volt regulated and level controlled by potentiometer in the system logic circuit control box , number 15. The drafting of hydraulic fluid in confinement then is causing inclined rotational rate. The hydraulic pump , number 10 is pulling at 20 times the rate due to the ratio gear set's speed incline gearing causing mechanical acceleration on basal vacuum. The basal vacuum is "work" energy that is utilized but not dissipated when the system is functioning.

Subsequently and simultaneously the electricity "reintroduction circuit" ( from the generator to the electric motor),  in the system logic control circuit box ( number 15),  increases the power level to yield more available output. The produced Dc ( direct current ) electricity directed via wire circuit, to the generator's electric drive motor, number 5, is then causing continual rotation producing adequate electricity to heat the dome cap via embedded electric resistors. The excess electricity will also be able to heat the fire hydrant and fire hose itself via electric resistance heating. The field coil of the permanent magnet Dc dynamo may also be then as an electromagnet to increase the system total electricity output.

The system flow cycle is a "run away effect" design able to then be controlled by increasing the field resistance within the generator. The generator can increase electricity output by directing to the permanent magnets in the Dc Dynamo field coil causing the wire wound permanent magnets to become electromagnets increasing the magnetic field.  The electromagnets effect is then causing the generator to "slow" the system.... while increasing available electricity output ( volt regulated in the control unit , number 15). The power regulation  / power management "electronics",  then to adequately control the electricity at it's level safely.

The system can then be used to heat side walks or illuminate street lighting reducing the cost to the tax payer. The design may also be used to power street drain flood pumping electric water pumps. The system may provide emergency electrical power should the grid fail due to weather advent.