Currently most large industrial farm equipment then operates upon diesel fuel. Oil , for the most part, then being a finite resource... with the exception of "grown" oil then extracted via algae bio reactors,  is essential  for the Agriculture Sector's functioning. Bio-diesel may be extracted with additional processing from the growth of algae.

Since most industrial farms are then " locked in "  financially ....,then having purchased harvesting equipment that requires diesel fuel, a micro production system to produce " Bio-Diesel " on the farm itself would be advantageous for the farms financial stability.  Peak oil's economics effects all products price that use petroleum and currently the food cost are already inflated due to the system of production. This is not safe for civility and a security issue. We are presenting a solve.

Most Bio-Diesel reactors are large and cumbersome ... also only then using sunlight for the growth of algae... to reduce the cost of operation, to then cause the algae's growth, we have designed an alternative pathway. The situation  cost vs. volume production  ( ie. energy input vs. yield ) with a fuel less draft cycle generator system http://www.designdeskinc.com/hydraulic-draft-cycle.html to power the bio diesel bio-reactor )

then added to glycerine to increase volume.....glycerine produced from bio diesel production from algae oil to

heater , the second  then by heating exchanger with electric pumping then with heat derived from the

* Note -  "Dumb Coils"  ( depicted upon http://www.designdeskinc.com/algae-bio-reactor.html  ), are then

may sell ( off setting the cost of the Farm Fuel Units installation ), selling bio diesel to the trucking industry

for continual operation of semi   trucks until conversion can be attained.

Additional  "Dumb Coils"  ( may take multiples according to the tubes selected diameter ), then  will allow

for interval bio diesel processing  ( ie. every 72hrs+ the operator will then run a "full cycle" activating the bio

oil will be the daily target  yield of bio diesel per 100 acres of farm .

should be buried  under ground in a storm proof chamber with adequate ventilation.

with injection flow tubes and control systems then route via tubes and valves to the burner unit.

The depiction directly above is the stratification system for the production of bio diesel. The core chamber then is a methane digester. The numbers the correspond to the above parts list components. Due to space constraints the incorporation of the separate functions required for this system to operate, have been designed as a single unit.

Due to the stratification of fractured algae within the digester the oil will float atop the water algae "bloom" mix so that the intake for the pump into the intake of "D" then will have two inlets , first,  incorporating the "return oil" flow tube and the digester oil level at strata height, ( intake by additional tube at correct height determined by total production rate of the system.

The out flow of "D" 's oil pump then to travel up coil.. causing pressure increase pushing oil past the filter and optical sensor. Additionally the temperature sensor then contains air injection feed tube to allow the system to use oxygen as Aerobic bacteria then require air...

The reason for Aerobic bacteria in stead of anaerobic bacteria is that the higher sustained temperatures for Aerobic bacteria will assist in its control... less of an environmental problem should the bacteria escape....  The mixes gas extraction CH4 plus air  and CO2 will then be sent to a gas stratification system to produce the synthetic glucose for use in the fermentation of the "char" / , slightly burnt algae sludge to produce a wood alcohol "Methanol " then able to be blended with some of the excess glycerine then produced from the bio diesel process. 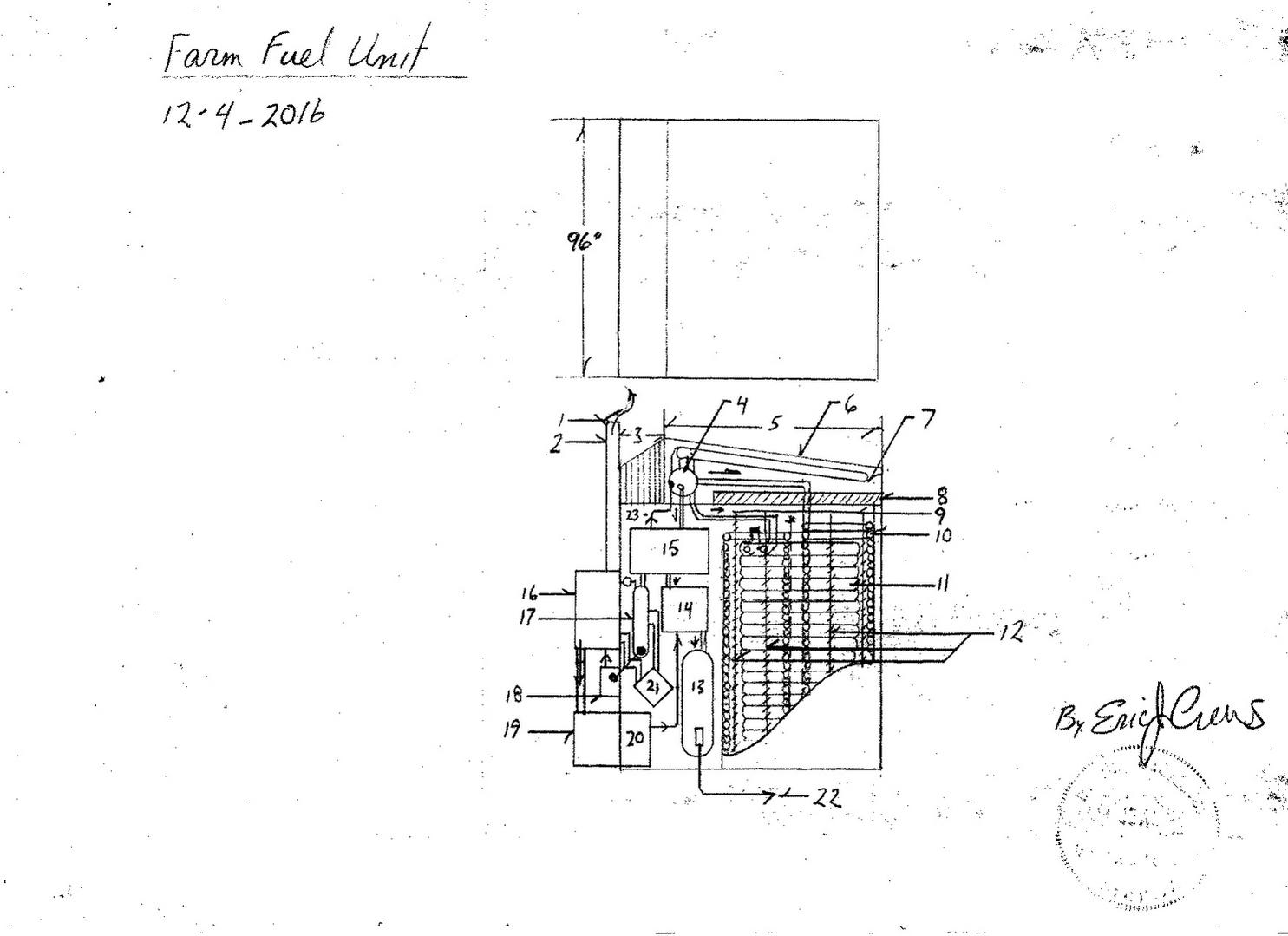 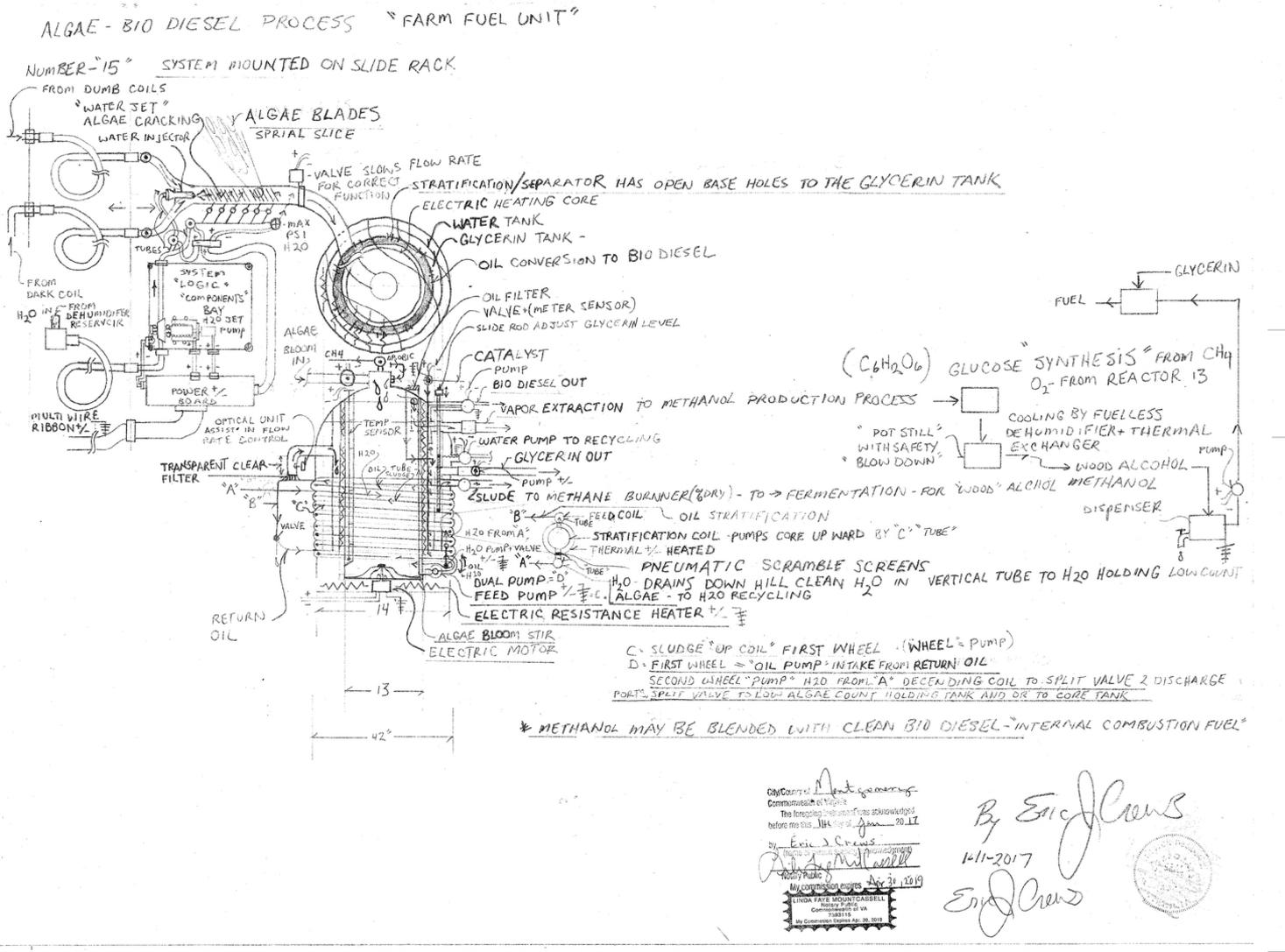