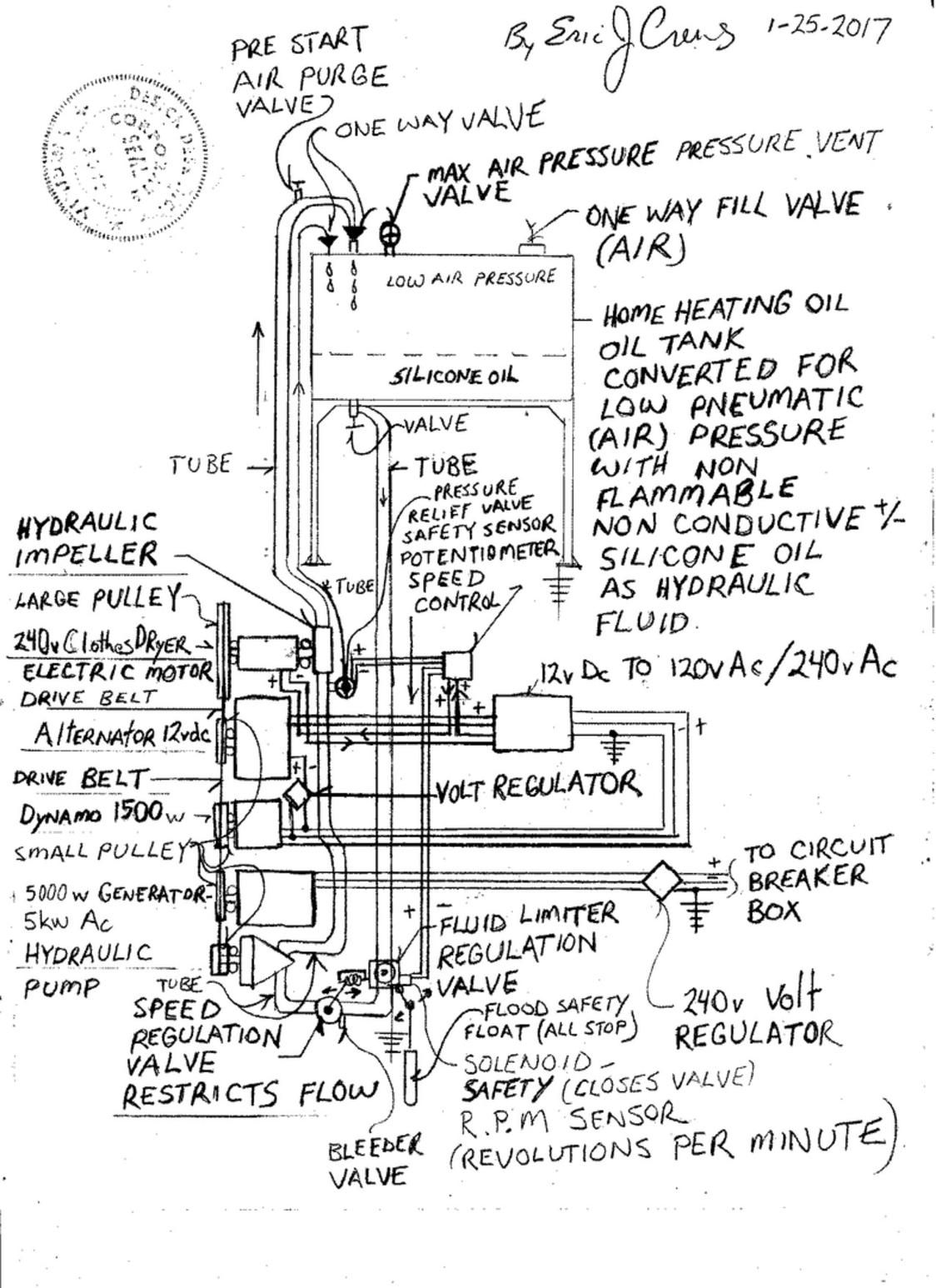 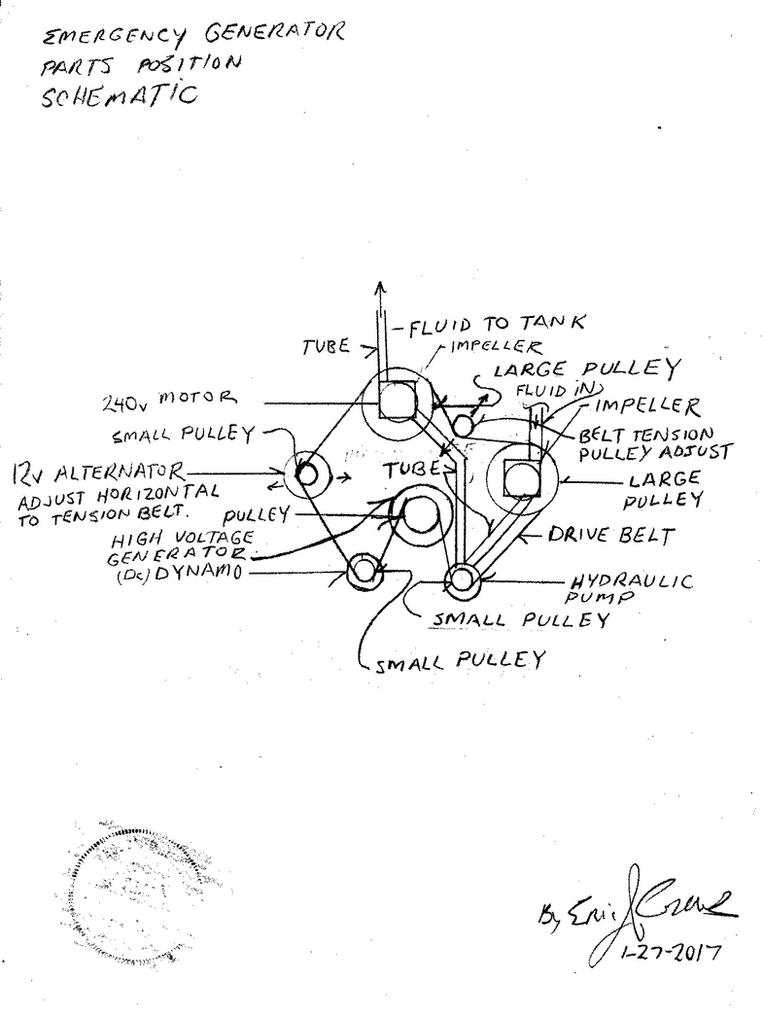 Ever year power outages cause problems for people when inclement weather occurs then knocking the power out... a solve is to then use a system like this. In the weather travel to refill the fuel is a hazard that can be avoided with a design system such as this. The design does not burn the silicone oil it ( the oil ) is then used as hydraulic fluid and will cause a constant velocity on a run away effect to then produce sustained electricity production The final system housing will also encapsulate the generator design from the elements keeping it dry.

The above system then being a "tilted" incline containing a pressurized  fluid...

Prior to "Start" the design system is allowed to drain the fluid injection tube ( ie the tube  into the the air pressure silicone oil pressure tank), by opening the pre start "air purge" valve and opening the bleeder valve on the speed regulation assembly with the fluid flow valve closed to retain oil within the pressure tank.  Then by pulling the spring retention assembly with the system switched to the "on" position in the speed control unit, the design will produce fuel less electricity. The fluid injection tube may need to be elongated to give adequate time for the generator to spin up to correct r.p.m. and reintroduction power levels then feeding electricity to the 240v electric motor.

if 50psi of fluid pressure then entering impeller  4" dia ( diameter ) connected to a large pulley 12" dia ( diameter ) then advancing a drive belt  causing the rotation of a small pulley  ( 4" ) , causes a ratio incline,  connected to a hydraulic pump 6" wheel hydraulic compressor / pump May also be a piston type system) then the hydraulic fluid post hydraulic pump then entering an impeller of 6" dia ( effective by fluid flow of 1:1 ratio ), tandem rotating with a 12"  dia. pulley  ( causing a ratio incline ratio) in the fashion in the diagram above then an incline in rate is formed.

The basal resistance in the stator / field coil / then counteracted upon by the  pneumatic pressure in the top of the silicon oil air pressure pressure tank. An increased stator "field" coil pressure ( columbs ) the will also serve to slow the mechanism as a breaking / regulation system. This also does cause higher electricity out put from the generator so be careful not to over load the volt regulation system controlling the output voltage from the High Voltage Generator.   With  a percentile of the generated current in the high voltage generator the reintroduction of generated electricity then directed   into the "drive"  electric motor the full rate is then  attained with "baug" resistant / load resistant  power ban to power other applications.

Many people who use oil heat in the winter can't afford the fuel oil.... With this type of system the oil is not fuel but uses the converted oil tank to then become a fuel less generator that works upon a compounding pressure cycle.

The air pressure then in the tank will act as a piston then compressing the oil to then push the hydraulic fluid out through the valve. The speed regulation valve is closed when filling the oil tank with non flammable silicone oil .

Once the tank is full of oil it is then pressurized with air to then cause to oil to have a pressurized effect. The valve is then opened causing the hydraulic pump to at first act as a hydraulic impeller then causing the drive belt system to rotate. This produces Dc ( direct current ) in the 1500w ( watt ) dynamo.The electricity from the dynamo is then converted to Ac ( alternating current ) in the current inverter yielding Ac electricity that is then fed to the 240v clothes dryer electric motor. The alternators current may also be added... to cause the 240v electric motor to spin. If using separate pump and hydraulic impeller the pulley upon the impeller will be a bit larger than the pulley upon the pump ( an optional format for the use of harvested parts...). Note the hydraulic impeller tandem with a large pulley then proceeds the hydraulic pump, with small pulley,  upon the flow line ( flow tube ). This causes the drafting ( suction) of hydraulic fluid and rate incline of mechanism.

The 240v electric motor then has upon it a hydraulic impeller upon one terminal end and a large pulley upon the other end with a drive belt system that will cause an increased velocity in the system rotational speed by rotating smaller pulley.

**** Critical for safety... - Ozone is produced by electric motors... a build up of the heavier than air gas in not wanted if using the dome tube system around a mobile home.... so powered ventilation via blower fan...,  maybe within the solar wick and base air inlets in the concrete storm enclosure are also required... sealed motors and generators should be used for safety.... an assay of adjacent low laying areas may need to be done to check for ozone pooling for safety concerns...

So many like windows to view from yet in storm conditions  they are a hazard   so..... a flat panel television out side the mobile homes windows upon the interior of the concrete structure and cameras to then display the "active" view...allows the occupants to not feel like there in a cave....

The "run" magnetic resistance then being produced in the stator of the high voltage generator ( with magneto ) [5Kw or greater Kw],   is counter balanced by the start pneumatic pressure in the oil tank.

Since this is a run away effect the fluid speed is regulated by a flow restriction valve with a solenoid safety system should the units R.P.M. ( revolutions per minute ) sensor then indicate to much velocity is occurring. The system will also mechanically adjust the valve by fluid speed.

The hydraulic pump is also as an impeller and pump as one compression "wheel". The pump side then being the smaller circumference with an inlet then into the impeller via a through port within the impeller wheel then allowing the fluid to enter the pump (smaller end ) to cause greater velocity with a slightly smaller diameter tube exhaust  as then compared to the intake tube.

The flood safety float is then a safety feature that is required causing an "all stop function" ( caused the valve to close stopping the flow of fluid),  should the system be effected by flooding due to heavy rainfall.

The resulting safe fuel less electricity is then able to save the user money and cause a safer heat for a home as no combustion is required. The  savings ( $) then  might be used for storm envelope for mobile homes using our cone dome idea....