generator cycle to then govern the generator's velocity rate )

20. Hydraulic pump ( high speed ) with a one way valve upon the exhaust flow fitting then connecting

34. 1:10 ratio gear set with hydraulic pump ( internal ) tandem rotating with the high side of the ratio

39.  "Kick" stand with retention spring to then keep the kick stand in the recessed position...

41.  Tool tank interior then contains space for extra inner tubes for the tires and space for tools

determine the Mph / Kph  "speed"  of the motor cycle / displays upon the instrument cluster via dial..

driven by electric motor within the gauge...

48. one way valve  ( pneumatic ) only allows air pressure into the combined component

50. Oil fill pressure rated fill cap dip stick affixed to the center of the cap to then measure the silicone

oil level within the pressure tank

53.  right side break actuation lever ( rear break ) -  left side  of the motor cycle then as the gear selector

This is  then causing a compounding effect upon the hydraulic pump number 20 to then yield a "draft" "suction" effect within the flow tubes . 50 X ( times ) 10 ( due to the ratio gear set yields = 500 r.p.m. at the pump number 20.  This  causes suction and yields advancement of number 18 causing the generator number 15  to then advance at hydraulic oil velocity rate plus the feed pressure from the combined component pressure storage tank ( number 14), then impaling number 17.

The oil flow post  ratio gear set's internal hydraulic pump then impales the base "input / low end" of the ratio gear set at the fluid distance equivalent of 500 r.p.m. with the  "counter tilt" effect then the rate incline will continue .( ie. then advancing the hydraulic pump and the generator ( number 15 ) to 5000 R.P.M.  This then causes the "drafting / "suction" of hydraulic pressure across the impeller , number 18,  ( intake  of the oil to the hydraulic , number 20) This is  then causing the generator and it's internal magneto to then produce high voltage electricity.

The force of hydraulic fluid then impaling the ratio gear sets internal hydraulic pump with the hydraulic pressure then at 100 psi. ( safety valve regulation fluid discharge ).   In addition the rotation of the electric motor , number 33 is fed current produced from the dynamo ( Dc current ) post

inverter ( inverted to Ac current in

the inverter ( number 32), and regulated by the systems logic control circuits in number, 21. Yields higher speed hydraulic fluid then compounding the velocity when the fluid is then directed to the hydraulic impeller tandem rotating with the low side of the ratio gear set.

The electrical pressure then being fed to the electric motor , number 33,  then has an advancing zero

point...   ie the "magnetic" pressure then is forward advancing  ( adding the base pressure  of the pressure in the combined component pressure storage tank to the produced rotational rate, ( r.p.m. ) of the mechanism in motion..

The circumference distance then as fluid volume / rate then being dragged across number 17 at combined component pressure tank fluid pressure. The " run away effect " then governed by circuit systems referencing the r.p.m. sensor and controlling the flow restriction valve, number 13. The hydraulic pressure  via fluid flow into the hydraulic impeller , number 17 is then grater then the stator / field coil resistance in the generator , number 15 and is then added to the draft effect rate of rotation.

Number 15's electrical output is the regulated by a voltage regulator in number 21 to then be controlled by a potentiometer  / variable resistor "throttle" control switch with an adjustable "base idle"   locking screw assembly with retention spring, before being fed to the main electric motor, number 51.

The flow tubes number 44, should have an exterior safety casing and also be grounded to control static electricity from building up and dumping the possible static to a capacitance system ( capacitor "bank" then to be controlled discharged. The capacitor "bank" then also with fault indicators and lamps upon the instrument cluster indication function status / fault. The tubes must also be rated to with stand negative pressure!

This design operates then demonstrating that unlimited electrical energy can then be extracted from a fixed pressure using a dual component pressure cycle with a counter "tilt" then also applied to the rotational rate increase to yield more electricity. Due to the increased hydraulic pressure then impaling the base of the ratio gear set within hydraulic impeller , number 38.  A max hydraulic pressure safety valve will be then installed with reporting fault sensor ( safety feature ).

The max pressure safety valve ( upon number 38 ) then vents hydraulic fluid to the combined component pressure storage tank , number 14. As an option the said max pressure valve may route the hydraulic

The "Start" system then is initiated via manually opening the pneumatic flow valve , number 2. This allows the air pressure stored within the pressure tank , number 14 to be discharged and cause rotation of the permanent magnet dynamo via the air flow then impaling the pneumatic impeller then advancing a ratio gear set at 1:10. The 10 side of the ratio gear set  then tandem rotating with the dynamo.

The Dc electricity output then is routed to the Dc to Ac electricity current inverter . Valve number 13 is also opened as soon as the electrical current is available ( electricity then derived from the transformer within number 22 post number 15 / or number 12 - a Dc 12v alternator.

The Ac current is then fed to the control circuits within the system logic processing / control center within number 21 to then be regulated and metered by potentiometers / variable resistors  and controlled by solenoids , to feed Ac current to the electric motor , number 33. This with the electric and or manual opening of the flow valve for the hydraulic oil through valve , number 13 then allows pressurized oil to then impale the series of hydraulic pumps / impellers flowing through pressure rated pipe and or tubes that may flex with pressure rated couplings upon the terminal ends of the flow tubes then being able to connect to their respective components ( ie. pumps / impellers/ pressure storage chambers).

The pneumatic feed, to then dynamo system, is the able to be automatically shut off via the pneumatic valve also actuated by electricity electric due to the fact that "draft effect"  ( hydraulic suction into

The system accelerates by the "draft effect" of hydraulic pressure and with an incline rate counter "tilt" in the ratio gear set. This yields a "run away effect" to then require restriction to the slow the rate of the generator mechanism... also then yielding constant "baug" resistant electrical production, to then feed the main electric motor connected to the manual transmission , constant stable electricity in a stable / increasing power ban as a percentile of the generated current then in number 15, will increase the current level to number 33 , when the main electric motor, number 51, then requires more electricity.

The design adjust for the loading of the main electric motor by increasing the power available as it is required.

The system contains multiple pathways for  low tension electricity functions to compensate for component failure ie. if the alternator goes out ( belt breaks ) then the system will auto re-route and derive electricity for the systems low tension 12v Dc current system from the transformers within number 22 from electricity post number 15.

upon a dial gauge ).

tumbler allows for the valve number 2 to be unlocked .

* Note - The fuse links for system function then placed within the electronics bay , number 21.

When performing this action the valve lever will also return

to the original position with the valve itself , number 2,  open still like a ratchet gear that will

then close by solenoid activated when the generator , number 15 is at speed. The valve will

closing as  determined by  the R.P.M. sensor upon  the generator , number 15.

in function...   ie. tells the logic circuits to then bring the generator to it's base idle ready to then

limits. When this  function is occurring  the Dc to Ac current inverter is bypassed ( separate

from the generator. Additionally the throttle upon the handle bars then also containing

then increase the electricity to number 33.

when greater power is requested from number 51.

As a precaution the system contains an "all stop" 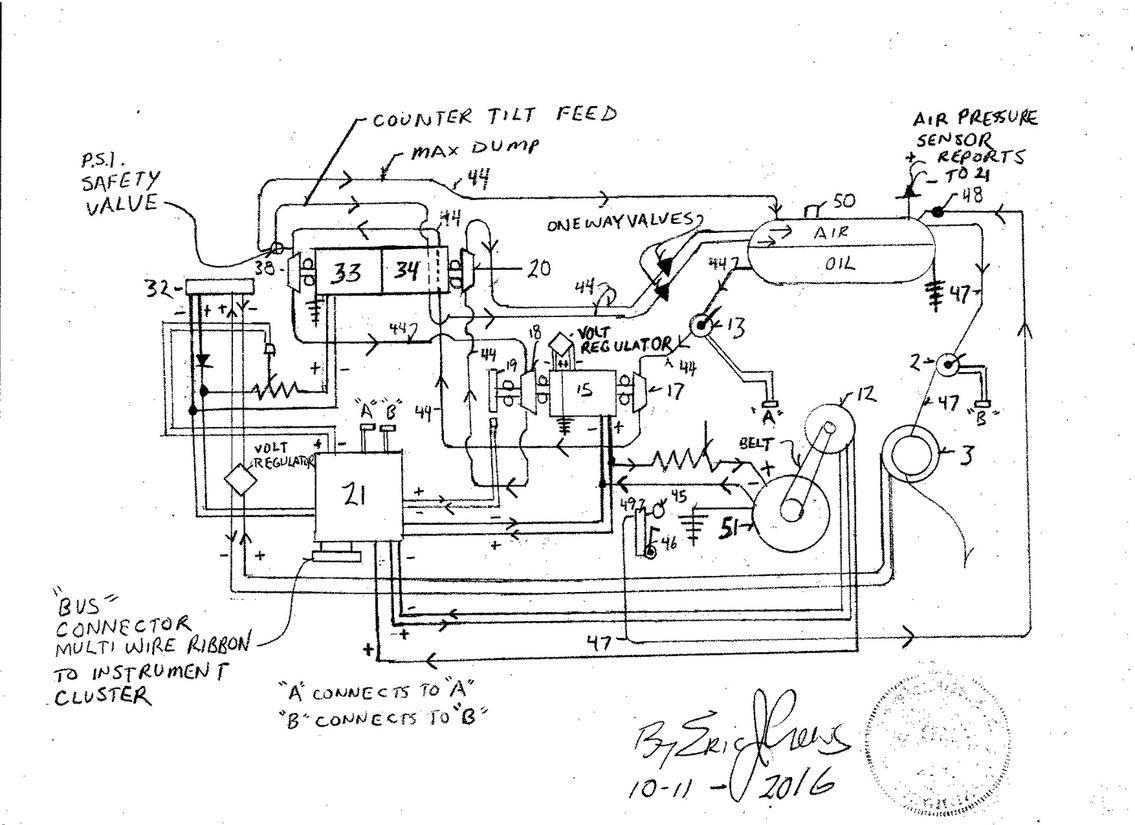 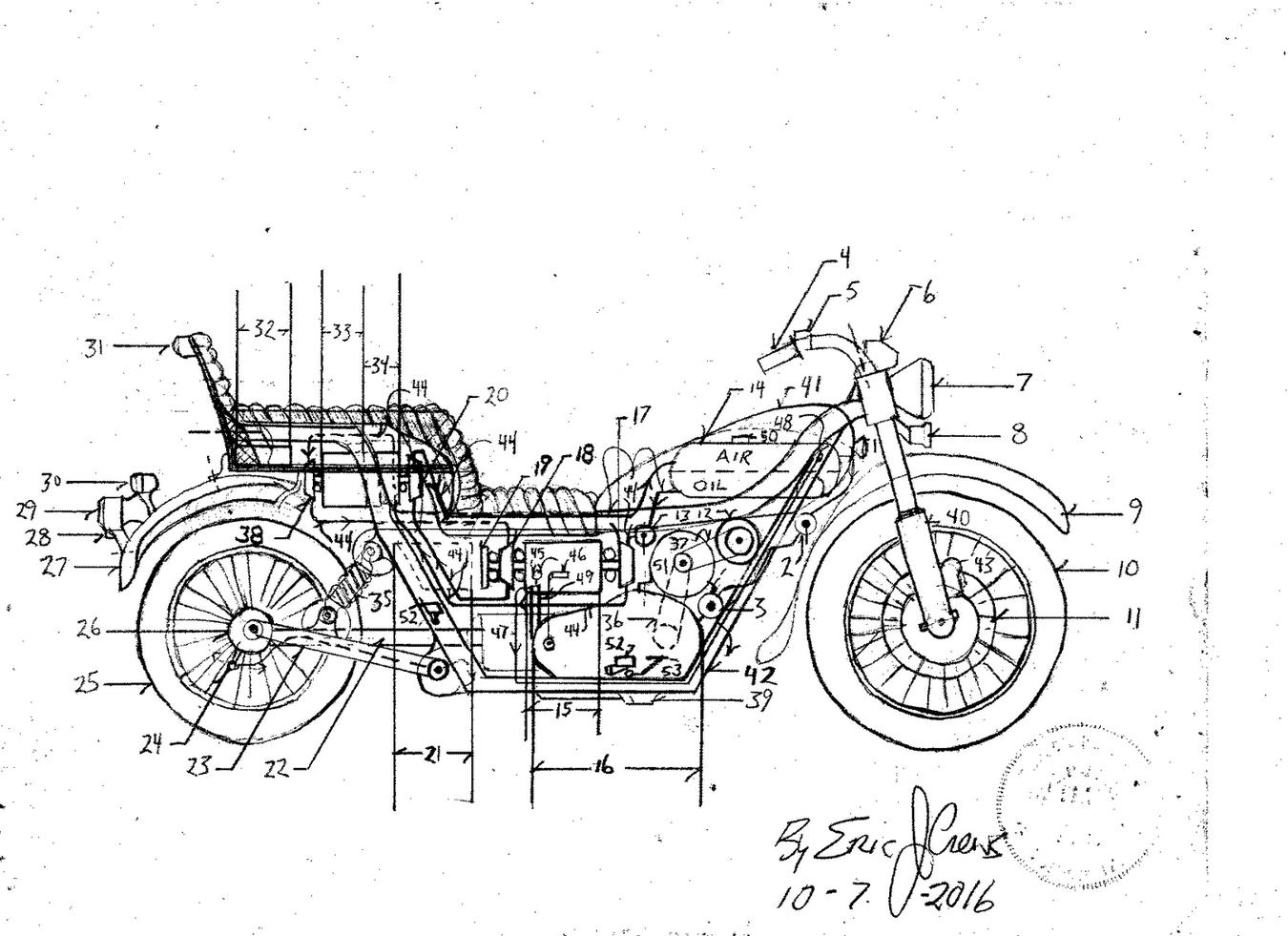