Currently with such a problem with carbon dioxide and the cost of fuel in many developing locations  an increase in capacity for transportation also with the work potential for farming is being presented. The below schematic will then produce an electric vehicle with sustained  "Active" generation...

The cycle begins then by the opening of the pneumatic ( air ) pressure valve labeled as the "start" valve.

The 12v Dc electricity is then directed, via wire to the current inverter. The "inverter" changes Dc current - (Dc = Direct current),  into Ac electricity ( Ac = alternating current / Ac electricity ). For a short time the inverted Dc to Ac current is then able to power the electric motor upon the differential causing rotation also of the hydraulic "compounder" ( the "hydraulic compounder" is then the ratio gear set's impellers and pump). The pneumatic system and valve are then closed once the "hydraulic compounder" is able to self sustain electrical production.

as Ac current causing rotation in the electric motor

* so the electric motor at 50 r.p.m. is also input to the pulley system on hydraulic pump assembly

* this then also advances, by belt transference, the generator assembly to also then

electric motor and electromagnetic clutch to then yield advance of the total system.

The hydraulic compounder is a run away effect so the restriction of fluid then is required! The governing equation then extrapolated from the generators final electricity output level  and information from the internal r.p.m. sensor then electrically positioning the hydraulic flow valve upon the exhaust of the combined component pressure storage tank..The flow is restricted by the said valve to control the base idle of the generating system.

The valve upon the flow tube then coming from the pressurized silicone oil then is allowed to open and allow for the oil to then impale the hydraulic impeller upon the hydraulic compounder. The said oil impeller then tandem rotating with the high side of the ratio gear set.The max pressure safety valve upon the hydraulic impellers housing also contains an electric sensor to indicate when the max pressure safety valve has actuated. The sensor then reporting to the systems governing electronics will then restrict the hydraulic flow then from the combined component pressure storage tank containing pneumatic pressure atop silicone oil.

level ( pneumatic ) to then cause sufficient oil pressure within the tank so that the exiting oil pressure is sufficient to then counter act the total resistance in foot pounds when factoring the resistance of the ratio gear set , field coil in the generator + average payload / incline/ and operator's body weight.

The "clutch" will then need to of an electromagnetic type to allow the system sufficient speed then using two thru bore slip rings for electricity transference.

The pulley incline then is as a 6"diameter pulley upon the hydraulic draft assembly containing the 1:150 ratio gear set and the receiving pulley then upon the electric motor differential assembly then of 3" diameter.

The high voltage Ac generator with magneto and r.p.m. sensor that also reports to the logic system control circuits to the aid in automatic speed regulation of the total system then by signaling ( causing electrical current ) to the close / restrict the oil flow into the the system both for the "y" pipe valve ant the main oil flow inflow from the combined component pressure tank.

The "throttle" will then be by variable resistor / potentiometer to then increase the electricity level generated in the generator with internal magneto then governed by the variable resistor / potentiometer  adjusting the electrical current level to the systems electric motor connected to the differential system.  The electromagnetic clutch allows for smooth acceleration without causing the front wheel of the bicycle to loose contact with the ground as a safety precaution.  A slow incline then allowed by the electromagnetic clutch's  regulating electronics... ( potentiometer ).

The flow tubes are then electrically grounded to control the static electricity within a controlled fashion but the design is not grounded to the bicycles frame. The entire system is then within a casing between two frames of a bicycle. The frame ( two halves  the the left and right side) so that the system does not electrically ground to the frame.

The out put drive shafts of the electromagnetic clutch and drive shaft connecting the rear wheel sprocket is then containing a non electrical conductive interlock drive shaft connector link to prevent electrically charging the bicycle frame. The casing then keeps the system safe from weather, rain, snow, ice etc so  as not to cause random conductivity due to water penetration. The casing is a rain shield....yet allowing for venting ( forced fan blower optional).

The systems  sensor circuits ( generator current level / generator's r.p.m. / max pressure safety valve  sensor) then also plug into the electronics housing within the inverter unit.  The throttle controls the electrical current re-introduction level from the generator to the electric motor as well as the electrical current feed intensity to the electromagnetic clutch. The motors and generators are explosion proof and of sealed type with inert gas also then then supported by sealed bearing races. Due to high speed the material selection of choice for the impellers and pumps is then of stainless steel. The brush system then of stepped dual brush ( ie. staggered fail time.. total of four brushed per quick replacement cartridge).

Additionally  ( as an option) a "Y" shaped exhaust flow tube may be installed upon the hydraulic pumps exhaust flow to then cause the exhaust flow to divide and be directed to an additional hydraulic impeller tandem rotating with the generator to then also vent into the combined component pressure storage tank. The additional flow tube system will also contain a speed regulation valve to control the velocity of the oil then assisting in the rotation of the generator.

The other flow line of the "y" divider pipe then directed directly into the combined component pressure storage tank  ( one way valve is upon the tube system).

The flow system then on the additional hydraulic impeller attached to the generator will also contain a max pressure safety valve and pressure relief tube then venting into the combined component pressure storage tank. The additional max pressure safety valve will also contain an actuation sensor... the sensor then via wire and circuit will cause the restriction of oil flow upon the generator / oil impeller intake by reducing the valves flow rate. 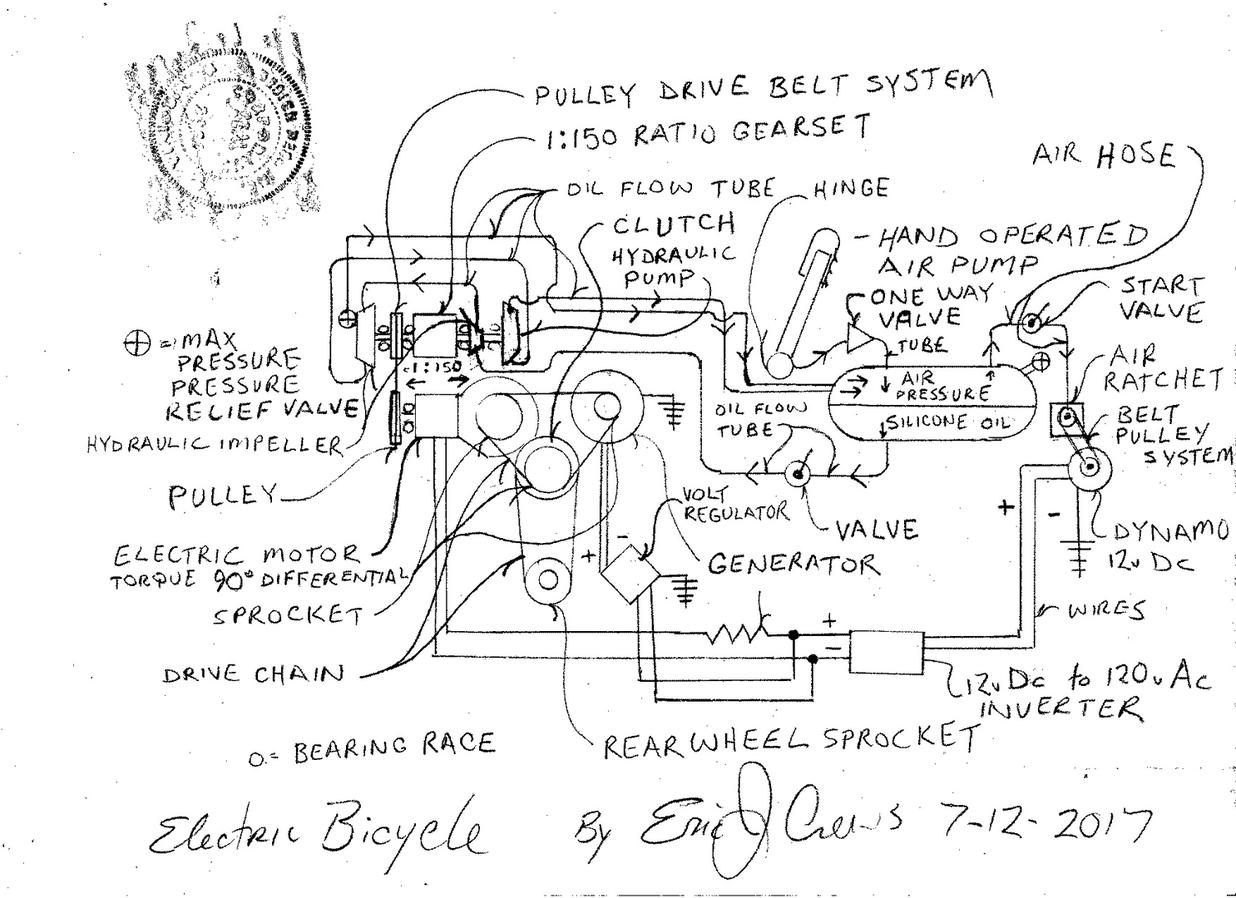