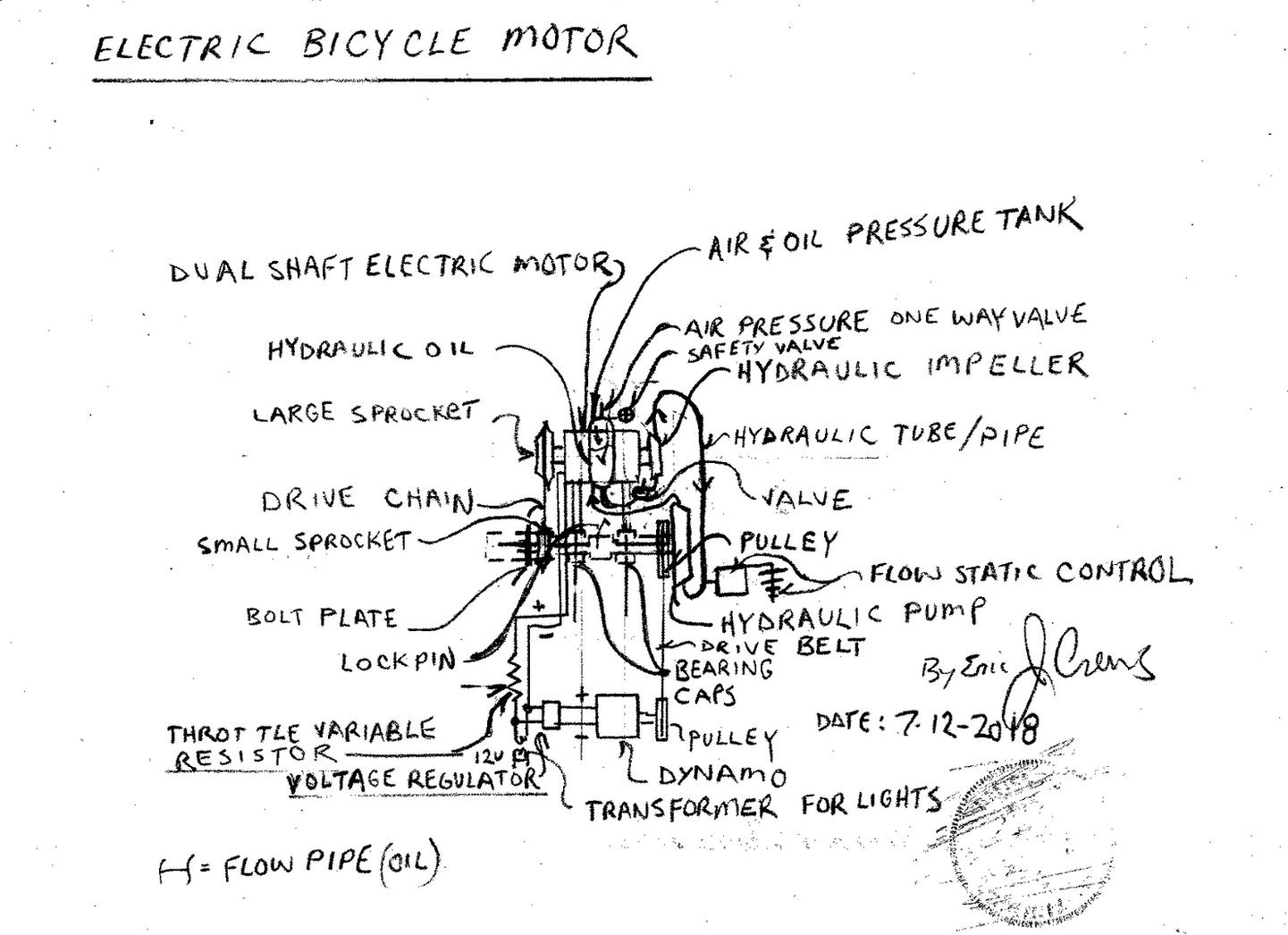 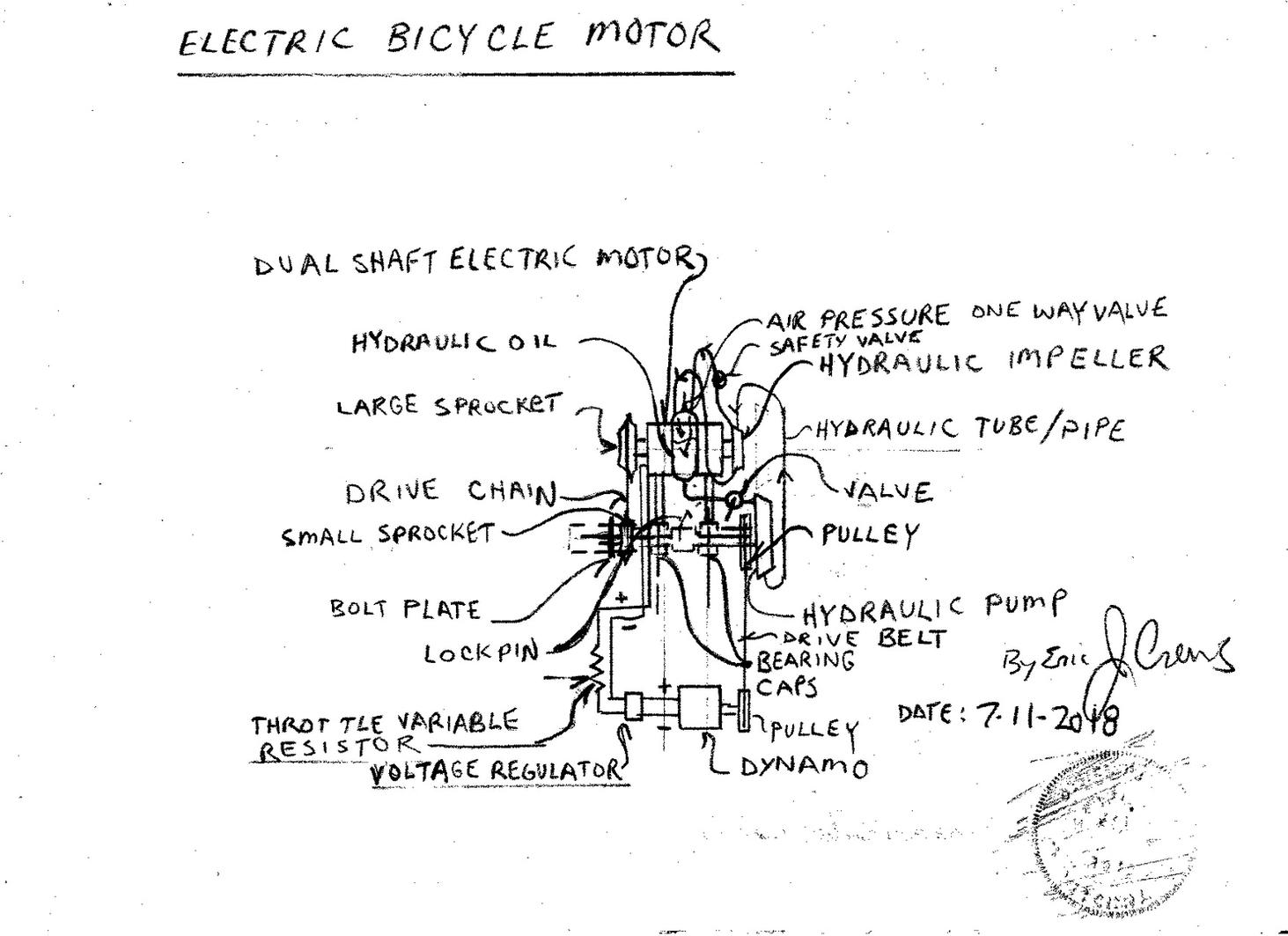 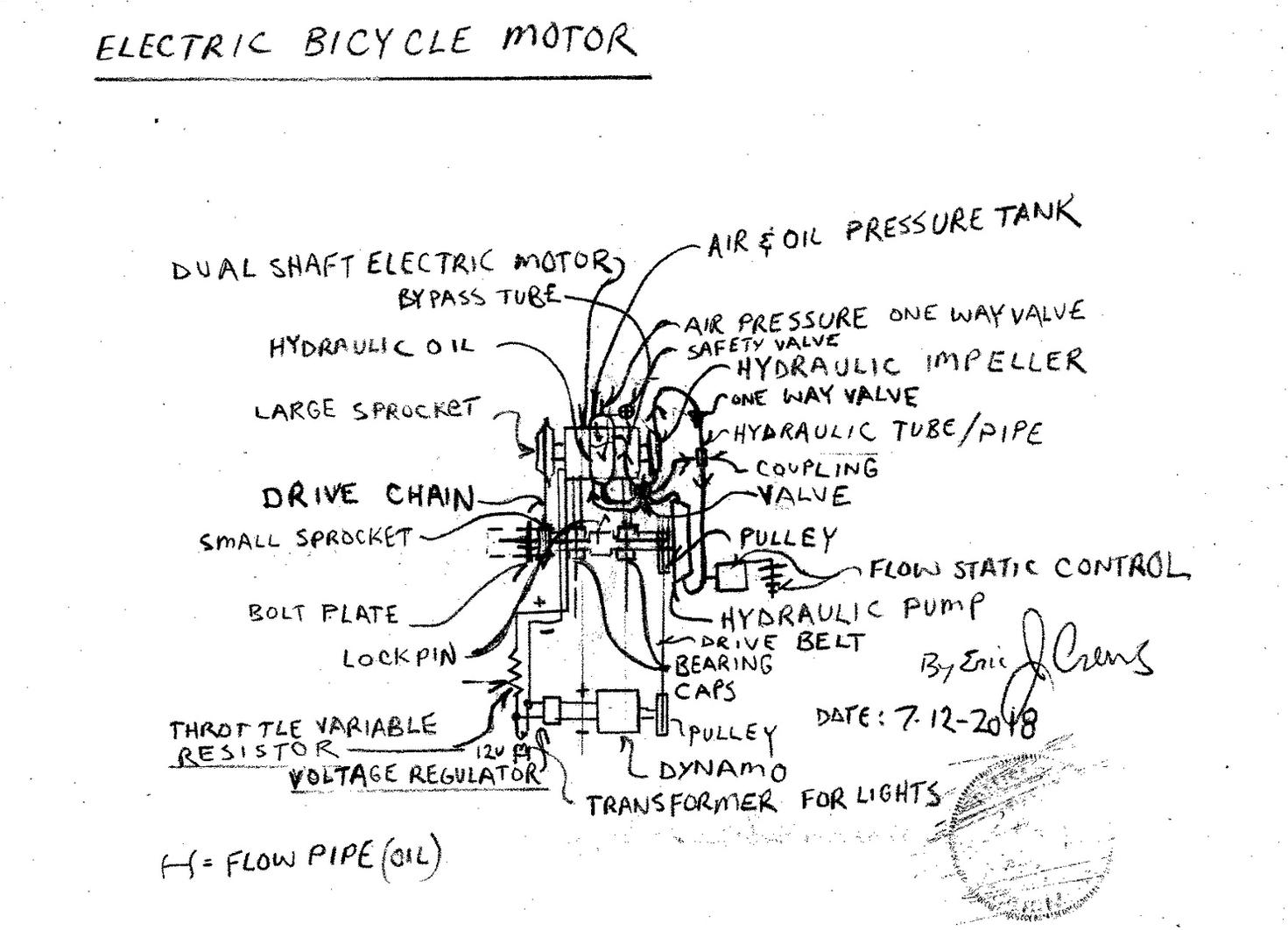 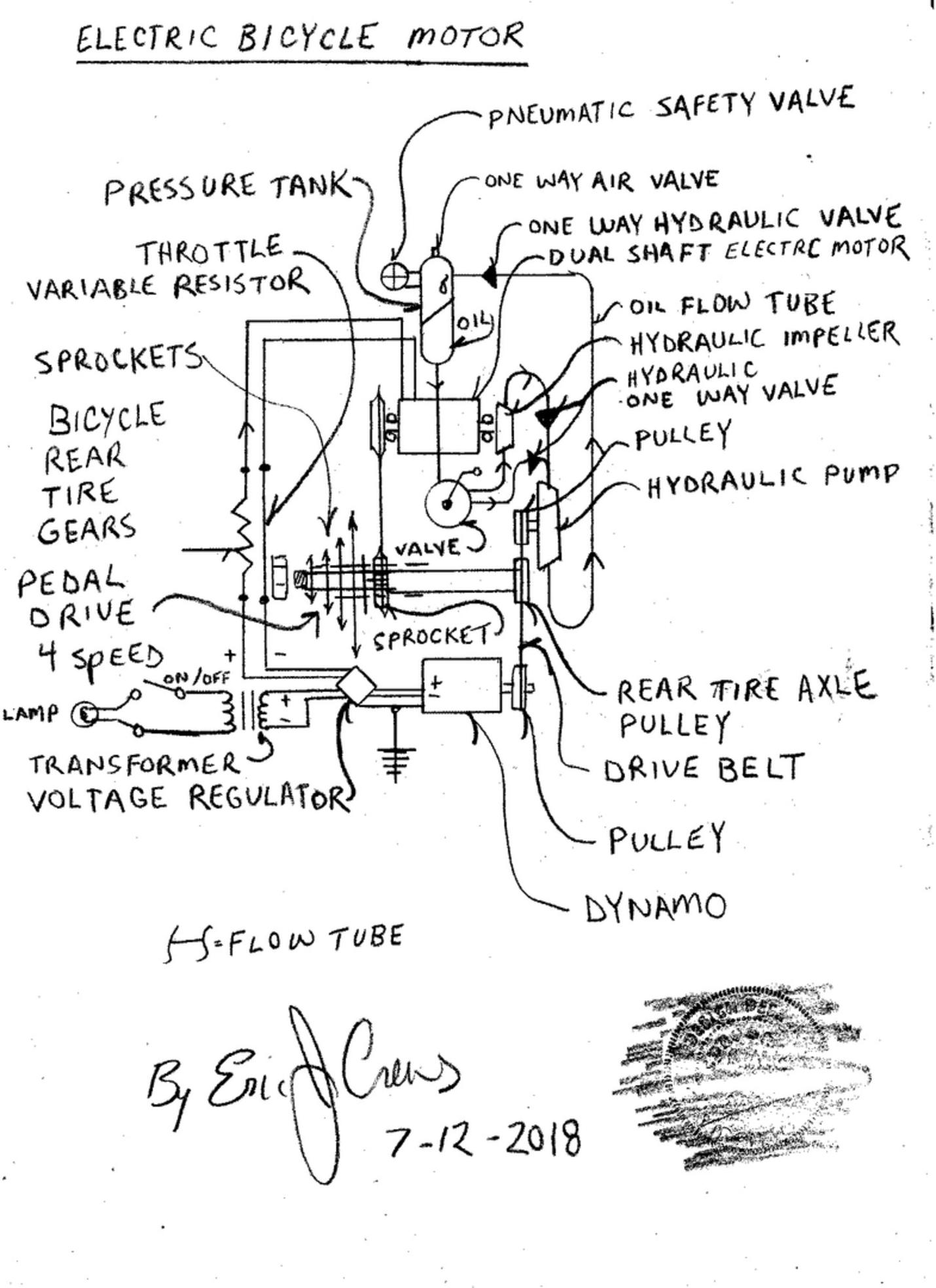 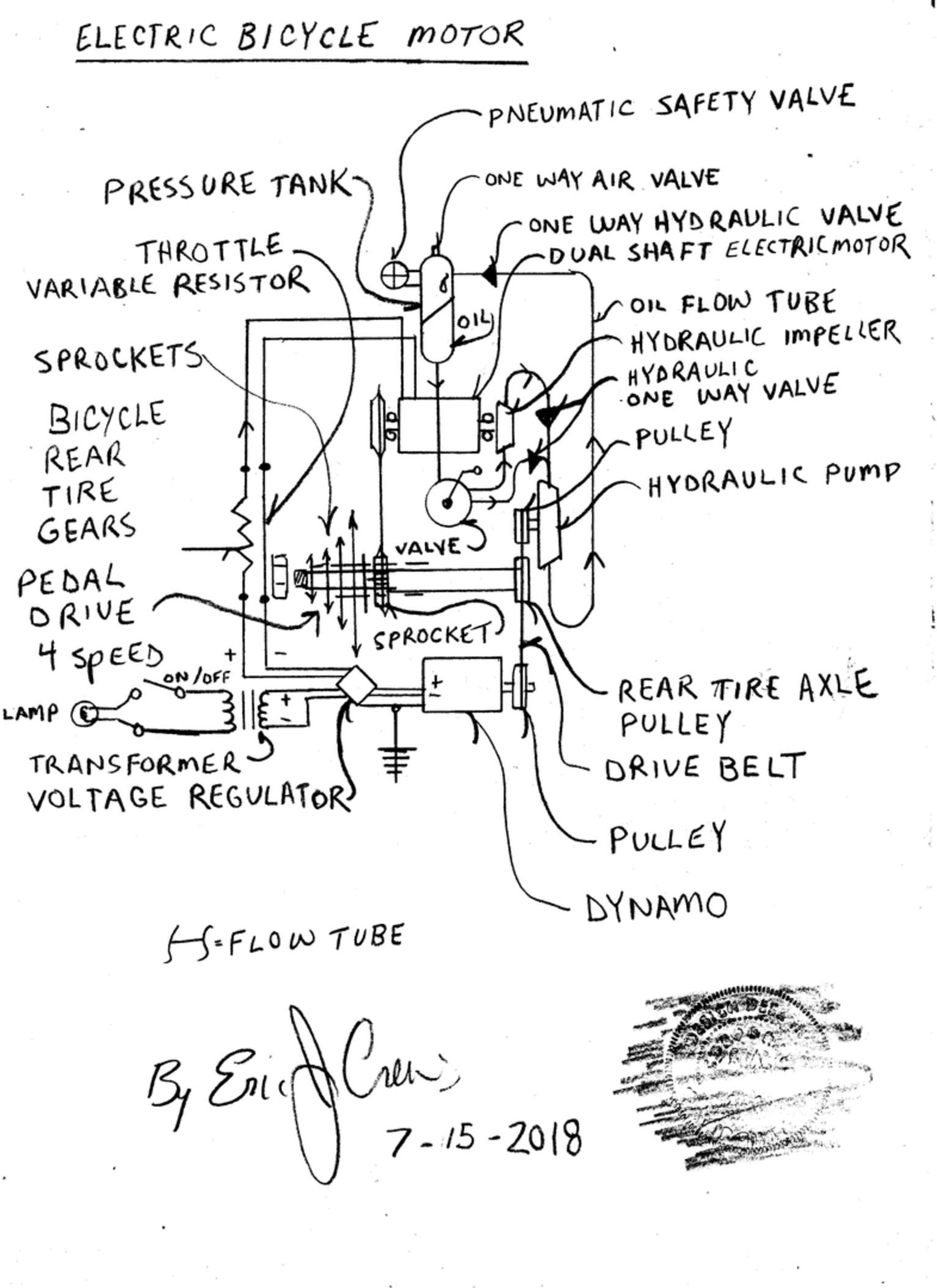 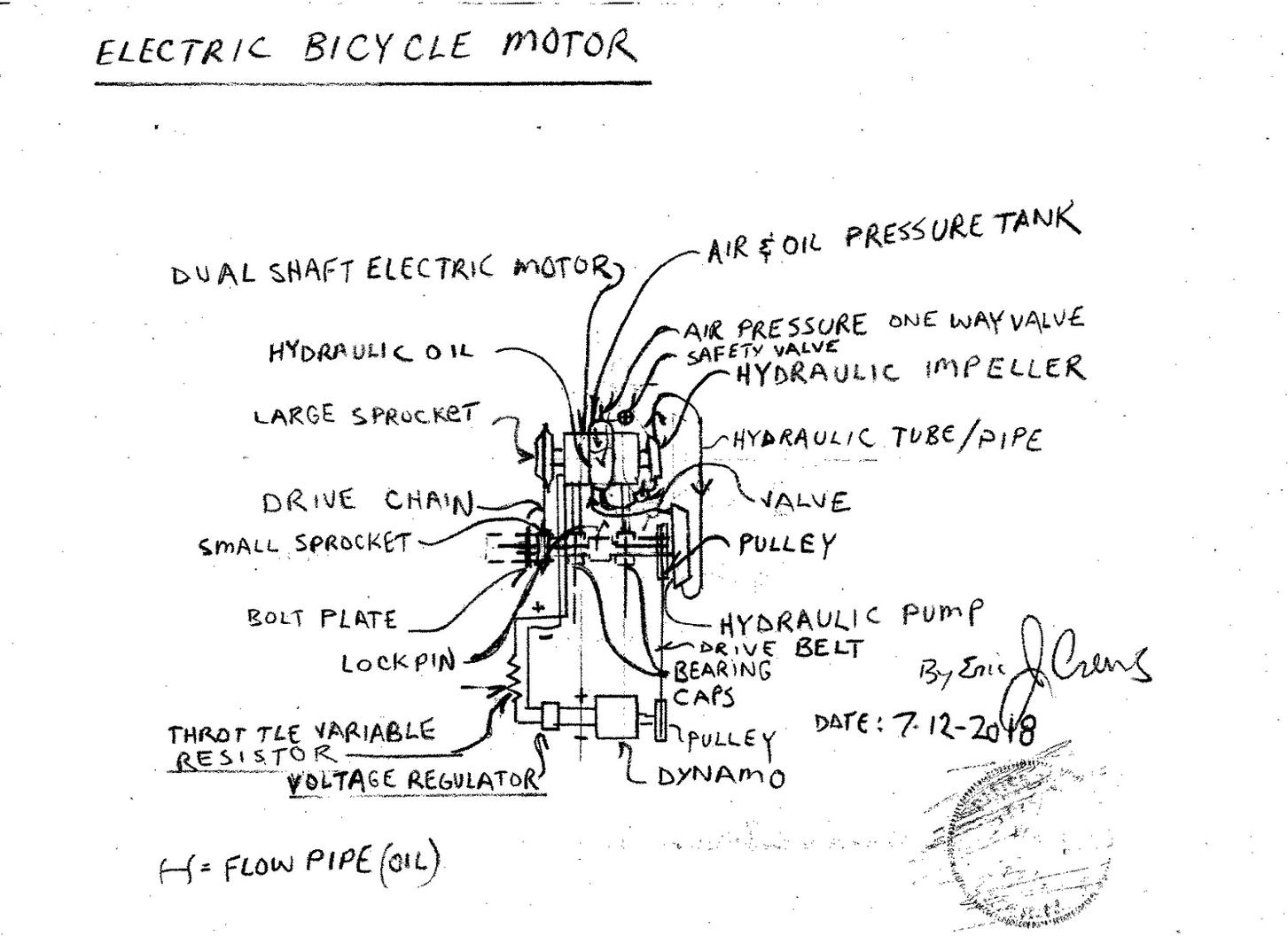 The "Electric Bicycle Motor" is an advancement in cycling. Ever been on a long ride and had problems with inclines hills etc.. This system uses pneumatic pressure to pressurize non flammable non electrically conductive hydraulic oil to then cause a draft effect by the wheel of the bicycle motivating a hydraulic pump ( with greater diameter pump wheel ) pulling hydraulic oil under pneumatic pressure across a  hydraulic impeller causing mechanical advancement of a dual shaft electric motor.

* Note - the dual shaft electric motor will need an electricity insulator union then being non electrically conductive upon the terminal ends of the drive shafts to prevent and unwanted stray electricity. The system will be weather shielded and mounted to the bicycle with non electrically conductive mounting points. The dual shaft electric motor is explosion proof.

The dynamo is then with internal speed increase gearing to produce higher levels of electrical current. The gear incline may also contain pneumatic counter tilt or hydraulic counter tilt to counter act the resistance upon the high side to the dynamo's gear incline via impeller of either type. The pneumatic cycle then venting to air the hydraulic cycle  impeller within the gear set ( high side tandem rotating ) then venting into the intake manifold / hydraulic pump intake coupling.

Important - the system should use non flammable non electrically conductive silicone oil.... then dynamo the also of sealed type generator

The dissipation of unwanted electrical "gain" then dissipated as light via electric light bulb.If the bicycle drive chain then is detected induced with current a n electrical ground "pick - up" then with "ground "brush" can be mounted upon the drive shaft extending from the electric motor between the sprocket and dual shaft electric motor that then is connected by wire to the artificial electrical ground ( plasma box)..

The pressurized oil valve's "load position" is then causing the oil flow direction actuated by the hand throttle just like a standard motorcycle acceleration throttle "to cause" the oil flow to route to the hydraulic impeller via cable changing the valves position. The hand grip twist throttle will also contain a potentiometer / variable resistor to increase the electricity level to the electric drive motor with the electrical current derived from the high speed dynamo.The valves spring tension then causing the throttle to return to it's natural position causing zero current feed and "open run"  flow valve position. note the "valve" then containing a coil spring dampener internal plate valve to prevent fluid lock when the "throttle" is in the "zero" position ie when not intending to advance the system by  hand grip throttle twist.

So the sizes of the pulley...the 12"  inch diameter upon the wheels drive line  4" diameter upon the  hydraulic pump input drive sprocket and 5" diameter pulley upon the dynamo input drive pulley. The hydraulic pump internal  "pump wheel" / compressor is then 6" in diameter and the internal "impeller wheel" is then 4.5" in diameter.  The electric motor is also electrical insulated and grounded to a static electricity dissipation system. The electric motor is then controlled by potentiometer / variable resistor as a "throttle" upon the hand grip like a standard motorcycle. Air pressure then at a safe 100 p.s.i. ( pounds per square inch) and within a one gallon pressure tank that is filled  half full of oil. The pressure tank then  rated at 250 p.s.i. capacity. Over pressure safety valve then vents upon reaching  operating p.s.i. at 100 p.s.i. ( please wear safety gear! ). The electric motor then 5 Hp and generator at  5kw - 5000 watts continual out

The dynamo (Dc electricity generator) then with internal speed advancing gear system to cause high rate for rotation for the internal armature yielding sufficient levels of electrical current output.

The compound valve then also has the ability to reroute the oil pressure by "by-passing" the hydraulic impeller. The effect then may also act as hydraulic drag as a breaking slowing effect....

The valve will contain a flow by pass flow tube to then enter the pressure tank containing air pressure and hydraulic fluid. The design good for a front wheel drive bicycle.... The bolt plate then tandem locked / bolted to the front wheel's similar bolt plate.The handle bar hand grip throttle will then use a variable resistor / potentiometer and cable actuation  retainer with the opposite end of the cable then connected to the hydraulic valve .. to control the valve.

The above system then may also be useful to then use the rim of the bicycle without a bicycle tire to drive a drive belt motivating a higher voltage generator to then heat salt water to steam /  with a hot air bubble blower then cool it  allowing the heavy salt laden water to be transported to total dry system ( not to be returned to the ocean ) and additional water pumping system and "cooling chamber / condensing chamber", producing free clean water..... A low cost desalination system for the conversion of salt water to clean water also then producing excess electricity to pump clean water for agriculture and or domestic use... the crops may also be refrigerated if the system is used to stratify / distill air to yield Nitrogen to cool the crops also assisting in insect control.