The Earth Quake Dampener is a design system to the reduce the effect of high magnitude earthquakes thus protecting people and property. The design does contain an internal filament wire to confirm of the system integrity, ( ie. that the system structure has not collapsed at low levels).

The box forms then linked in contiguous row to form a barrier "wall" then buried an sufficient depth to the disrupt the shock wave of an earth quake. The system will work for Urban areas for for single buildings or entire metro-plex areas as large  "wall" systems. Factoring the structure of buildings then at correct distance as not to in advertenly effect the foundation of the structure.The "shock wave" then by the density change in shock wave transmission medium then reduces the force effect.

This design system may be implemented in successive wall systems to continue to reduce totality of shock impact.The design is then powered by independent power systems, ie... "off grid" for the system then http://www.designdeskinc.com/hydraulic-draft-cycle.html

The system may also function as emergency power if the Utility "grid" then fails for a building at current levels to allow for fire truck electric water pumping systems or  by "firedrone " http://www.designdeskinc.com/firedrone.html

*Note - The hydraulic draft cycle generator system  may use a "Faraday Cage" to prevent load gain due to magnetic field inductance...and will be correctly electrically grounded.

The installation tool for this design system then a  trine boom arm ( hydraulic piston positional system ) heavy equipment with a lift crane / wench attached to the tip of the vertical dig earth saw. The second  "boom" then the dampener loader  ( cable and wench) and the third "boom arm" then spiral anchor system ( powered hydraulic).

The "dig saw" then acting like a gold dredge bucket line with material ( excavated earth) removal system ( high vacuum)... ie... to off load to a truck or control discharge of earth in controlled fashion. The saw then lowered by hydraulic piston system and dual axis ( horizontal and vertical) mount hinge  supported by the servo "crane" at the saws tip  ( roller return) to the required depth.

The wench attached "saw"  then driven by hydraulic fluid with the pumping system electric upon the trailer. The first piece that rides in atop the saw is the "guide" unit. This first upon each insert then acting to direct the "dig unit" ( the "dig unit" ) then as a downward sliding earth quake dampener minus the generator / dehumidification system - upon the cap unit only) the "dig unit" then is inserted into the "guide sleeve" to then continue to dig downward pulling itself down with corner spiral augers causing multiple dig tools to lower.  The "dig unit's" system "tool head" may then be able to be recovered  for subsequent re-use or repaired from the fully sunken earthquake dampener. It's not necessary to leave the "tool" in the hole.

Upon the base of the "dig tool" will then be  dirt removal tools that agitate loosen and stir the soil to then cause lift by vacuum and injected compressed air. The system may contain "where required" laser rock cutting tools.  When the "dig unit then has reached the base of the "guide tube" additional earth quake dampeners may then connect to the top of the prior inserted earthquake dampener.  This will repeat until the system depth for location function has been reached.

Earthquakes occur sometimes at great depth so this continual process could say load a 20' dampener every two weeks until the 100km deep target range is met... the dampeners will require electric down drive wheels to assist their sinking once out of the "guide sleeve".

If aquifers are encountered a concrete emulsion to seal the flow will be required as the extraction of earth from the base of the dig must be dry (post heating ) to then be vacuumed up ward at high vacuum velocity.The sealer injector then by weight attached to a wench and  "boom arm".

The trailer then having stabilizers ( hydraulically lowered feet) for lateral loading  keeps the system from tipping over also with additional "training wheels" that bolt on post site transport to assist in the vertical control of the tool.( Spacers for the trench may also be required to stabilize the dig)...

The design then having the dig saw dump material into it's chassis frame to be vacuumed with the assistance of injected pneumatic pressure to keep up with the material removal speed and pressure / velocity required. The material then by transported via flex tube to off loading.

The design system ( dual "boom" heavy equipment) will have sufficient power by fuel less high density high voltage) so that both functions will be able to carried out at the same time.. ( digging the trench / lowering the earthquake dampener into the trench then while the  earthquake dampener is in one position. The heavy equipment then upon a trailer ( not to cause great cost of construction to speed production of multiple functional units).

Soil, water content  and type of sub-trate ( clay , rock, loam.. "earth" ) then also factoring weather conditions also a factor the  dig system will also contain a lightning suppression system to avoid lighting from harshly effecting the system... then located upon the top of the "crane boom" with drag spike electrical ground in within the system. This avoids the hazard to the system. The design then operated at safe distance by command cord and remote control system... the operator is not upon the design.

A sweep of ground penetrating radar will map the placement of the earth quake dampener that will "ride" into place atop the "saw until in the vertical position. The "earthquake dampener" will then to lock in place by the hydraulic spread pistons also acting as a trench stabilizer. The third  "boom" then with screw auger to stabilize the system when in operation by anchoring into the ground.  The second "boom" then to lift the parts vertical then to lower them into the "guide unit"  when the motorized trailer has provided sufficient open trench distance. The steps will repeat until desired wall length is obtained. The "third boom arm" then by it's mounting system will allow for travel of the trailer before the re-anchoring is required utilizing a slide rack with tilt inertia calculated for the mass of the vehicle to then determining the slide racks material selection and bolt hardness ranges to then be utilized in the slide racks design..

A rain shield will cover the generator unit and as an additional requirement a small water pumping system powered by the generator will be able to evacuate the earthquake dampener. The generator system then also sensitive to flooding and will cause a safety  shut off function should a flood occur. This causes the system to act as a mote with directional controlled discharge. A piped drainage system with hyper velocity fuel less pumping may be added...

To prevent  mold or water born illness from forming within the hollow  of the earthquake dampener the system... the units will be able to heat up to 225 degrees F ( via on board electric resistance heater / electric blower fan) to then also ventilate controlled. The heat then forced the entire depth of the unit...

The design contains two independent water reservoirs within the generator / dehumifdifier compartment ( water collection / dehumidification & purification for select location an option for agriculture, ( distilled for domestic or animal use) .  An organic oil may be added to the system to then prevent insect gestation within the chambers atop any pooling of water.. Sale of the water or agricultural produce may off set the cost of the units installation.

Because of the magnitude of this type of system the depth is a critical factor considering speed of installation and depth required to then be effective... so maybe less depth and more  Dodecahedron Earthquake Force Diffusion units will be in final designs as the Dodechedron earthquake  force 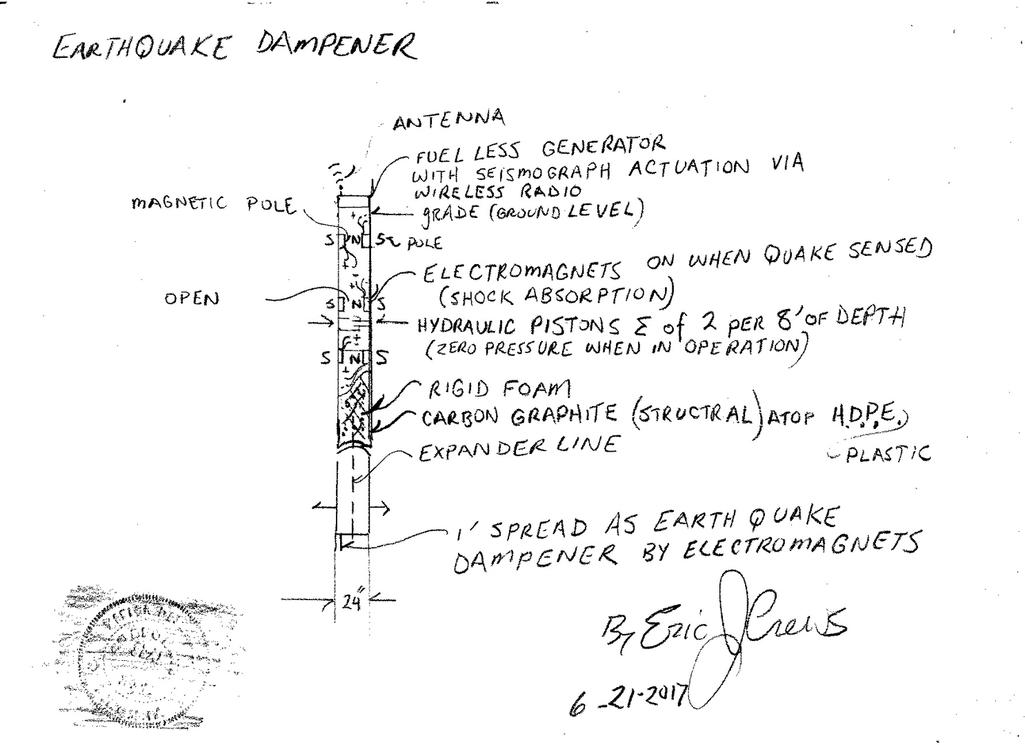