This motor concept is intended to speed up due to the "drafting" of a pressurized fluid. In the design below the ratio are 1:4 but show orientation as to position of driving source.

This automotive concept is using a pressurized fluid to accelerate a hydraulic cycle then generating electricity sustained.

If the design becomes ubiquitous the "used " car can then become a micro desalination system with the wheel removed and replaced by a salt water intake pump pressurizing a reverse osmosis filter then producing clean water pumped by the other drive shaft connected to a pump to then feed water pressure to the application.

This system is monitored by the rate flow meter where the mapping computer will adjust the current control mechanisms to allow for sustained operation producing fuel less electricity to cause an "active run" generator to power an electric car. Current intensity and power levels will also be monitored and reported to the display gauges (within the vehicle ) and to the mapping computer.

Because of the possibility of static electricity being formed by hydraulic fluid flow it will be required to ground the system correctly and the system will be "dipped" in an electrical insulating plastic.

From the full battery the "ignition" switch activates the mapping computer / control logic board  and powers the electric motor number 14 also energizing the stator /field coil number  in number 29 and activating number 12. The pneumatic pressure from the high pressure air tank is then released by electric valve number 16

The rate flow meter will adjust the current intensity for the system to operate reporting the R.P.M. (revolutions per minute) rate to the logic board / mapping computer.  So if number 14 is powered to 500 R.P.M. it causes 2000 R.P.M at the electromagnetic clutch driving the differential to rotation. The differential then causes both drive shafts to rotate.

On one side crown gear is a hydraulic pump that accelerates fluid from the secondary tank and pressurizes by hydraulic discharge the pneumatic compressor " turbo fan" . When this is occurring the other drive shaft from the differential is then "tilting" the high side to the 1:4 ratio gear set.  The high pressure tank is filled by air at the fill valve in number 7 (max pressure safety valve) .

So number 13 is pumping at rate of 2000 R.P.M.  and the fluid is then impaling number 10 causing rotation of number 10 , 11 and rotating number 15 (turbo compressor) to accelerate pneumatic pressure to then impale the dual impeller drive line (air and water/ antifreeze) connected to a high speed hydraulic pump that then feeds the high speed fluid flow to the impeller connected to a 1:4 gear set driving the generator.

So add the pressure / rate of fluid flow and pneumatic velocity and multiply by four times yielding the rate of rotation of the generator system. The generator will then replace the Battery current feed  for sustained operation and charge the battery.  Because assembly number 13,11,10,10 is advancing ..it will then be causing a drafting of pressurized velocity within the hydraulic flow and the impeller attached to the differential then drives the differential to acceleration. Thus Draft Motor. The excess current then becomes used to propel the automobile.

Within this system the mathematical equation "borrows" from the past in the equation..changing the variable and compounding the result in effect...circular thrust that borrows from an earlier  point in time...system will then accelerate to mechanical tolerance determined by construction and selection of materials. 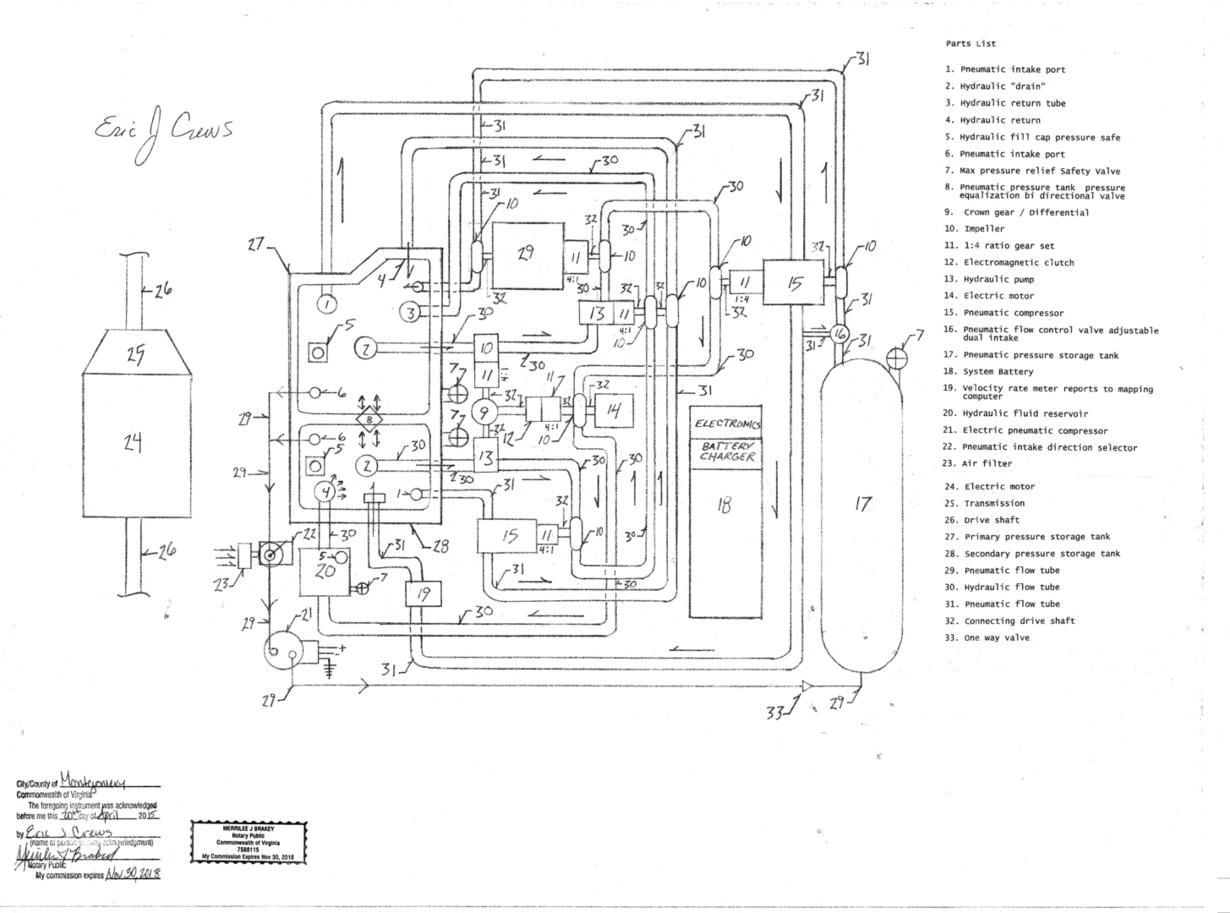