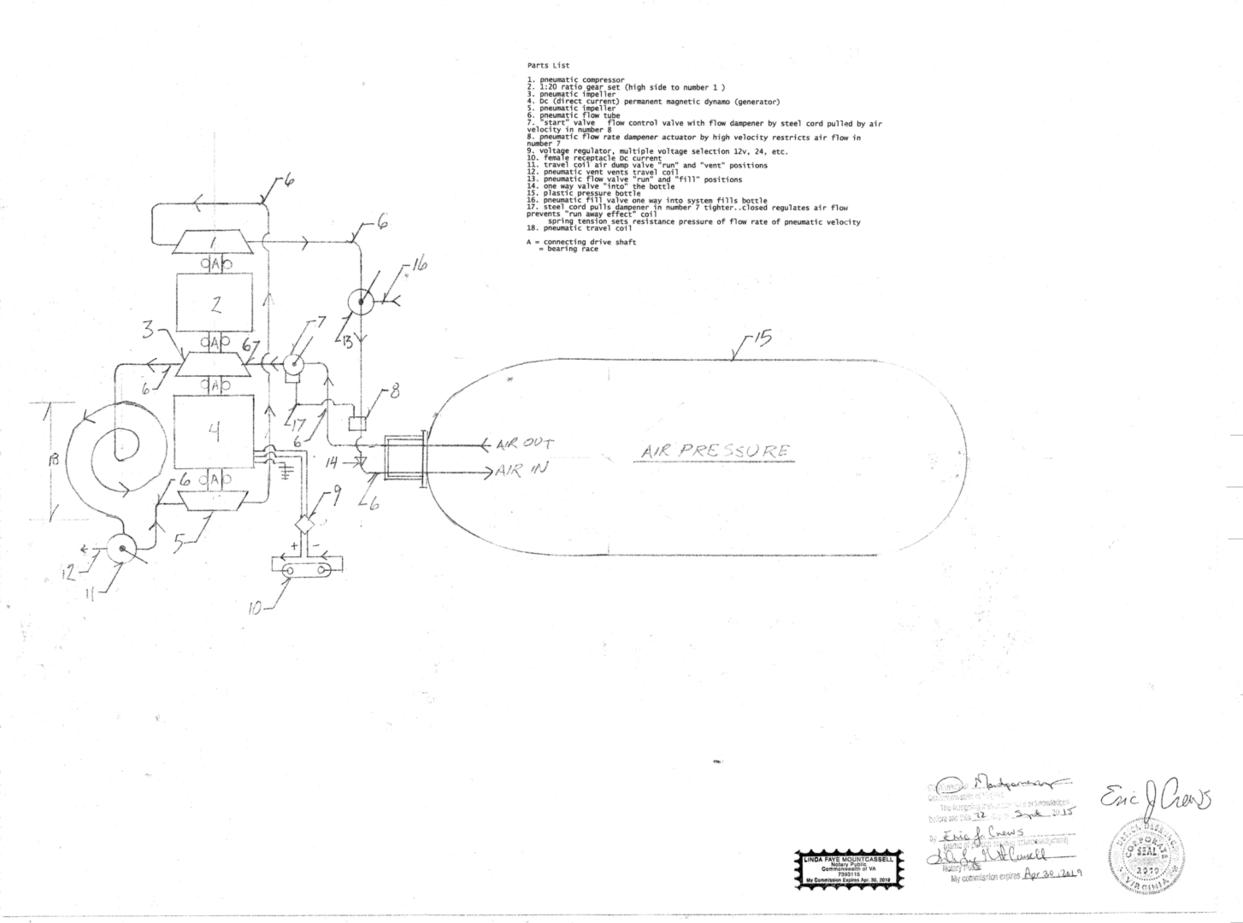 The Draft Bottle Generator is a pressure cycle that can produce fuel less electricity for remote and or emergency conditions. The system depicted is a small generator system but has many versatile  applications and is scalable.

As an addition to the depicted system a conical venturi "funnel"  upon the system intake " flow tube connected to the small end of the funnel",  (at "air out " within the pressure bottle) with the discharge of the generator system ( "air in"  ie. into the pressure bottle ) will then discharge into the side of the "funnel" at a slight angle toward the small end of the funnel,  so that adhesion occurs within the "funnel with open large end" to increase pneumatic intake pressure .

A coiling tube with vent of pneumatic pressurization holes may coil within the inner surface of the "funnel" allowing many vent ports for a balanced intake twist of pneumatic pressure should then occur within the inner surface of the "funnel" by flow tube air in (ie into the bottle) and will have a percentile (10% ) of final flow of the "funnel coil" at it's terminating end open and  jetting into the flow tube that then impales number 3. the inner funnel coil tube must be so that it does not impede (oval tube transitioning  to circular tube ) the coiling twist of the main pressurization flow in to the tube feeding pressure to number 3.

1. First position number 13 to the fill position and connect an air pressurizer like a bicycle tire air pump and begin to fill the bottle with air pressure. Please review the ratings of the selected bottle so that you don't over fill the air pressure bottle ( please only use Plastic bottles like 2 liter soda bottles if metal or other material is used for pressure bottle one must add a safety pressure relief valve to the bottle itself to vent the optional selection bottle type ). Check pressure with a tire gauge and return the valve number 13 to the "run" position.

6. The air pressure will impale number 3 and cause the ratio gear set to spin up producing a "draft" at greater velocity pulling number 5 forward.

8. To prevent a run away effect the flow dampener in number 7 is actuated by flow rate in number 8. This regulates the system for correct electrical output as per strength of magnetics (magnets )within the dynamo.

logic...so if number 3 is rotating at 50 rpm by pneumatic discharge then multiply by 20 yielding 1,000 rpm in number 1...causing an effective accelerating draft pressure of say 500 rpm in number 5 ( plus compounded pneumatic pressure  ie. "funnel" air entry into generator system ..then velocity across number 3 / counters magnetic field resistance in generator )  then the rotational rate in number 1 is then 10,000...see and the magnetic field pressure ie resistance while generating is then overcome by pneumatic pressure within the cycle....see why a flow dampener is require to restrict the air flow...    :) .

* Note - upon the drafting below a correction for clarification,  circle  O = bearing race....

* Note - Number 4 can also be then as a split motor / dynamo and then also in addition a charging circuit for the additional start battery to then accelerate and power
the motor side of number 4.

This system will incorporate a 12v Dc (direct current to 120v Ac ( alternating current ) power inverter  into a closed box yet vented  and will be sold at aprox $100.00 per unit called a   "Power Cell" . Emergency electricity...enough to power a computer ...light an oil furnace etc.....other applications as well....it is unlimited fuel less electricity..