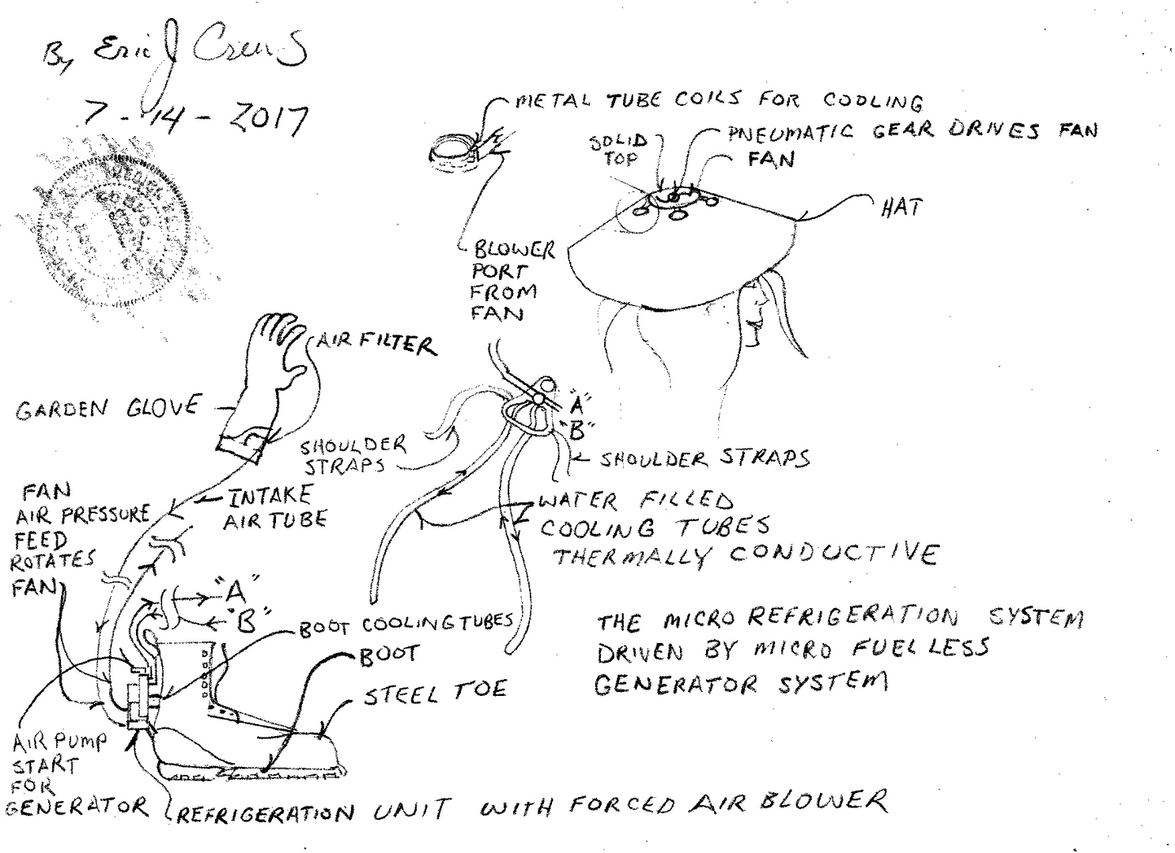 The "Cooling Garden Hat" is then  with an internal head ban support system to then cause slight mounting atop of the head allowing for mild elevation clearance for cold air to then be force blown from the fan. The Hat's cooling metal coils are then chilled by the cold coolant  forced pumped from the evaporator chamber upon the micro refrigeration system. The coolant non electrically conductive.

The gloves may also contain internal cooling system and then implement the albedo effect ie. light colors to then reflect solar heat.

The shoulder strap cooling tubes then may be worn to chill the spinal column under the clothes  or used with undergarments  to then keep the breast cool...

The water is pumped into letter "A" from the return water in letter "B" then chilled in a cooling coil within the refrigeration systems evaporator. The flow tubes letter "A" and "B" are also feeding cold air to the metal cooling coils within the hat.

The pneumatic pressure then by blower system with small electric motor then also motivating the air pump ( centrifugal type) to feed air pressure to the hat's fan then blowing  heat from the top of the head in a gentile fashion with the intake of the fan then being dragged thru the cooling coils. This will cause a slight temperature reduction as the system is then recycling the cold air within the hat.

The upper screened orifice ( top side of the hat ) of the metal cooling coils then an open orifice with the channel port then being the fan's intake port. It's not a hair tangler...( top side hat) . The fan  has intake from the  interior of the hat thru small ports  ( sum of 8 at 1/4" but it is mostly covered upon the interior with an interior cap plate into the cooling coils ... the interior of the fan  top inner of the hat  then also has a multi port screened hole pattern sum of 32 then at 1/2" diameter polar array about the exterior top of the hat. The fan blows downward.

Refrigeration system then may be upon both boots for equal distribution of weight also to act as a back up system should one unit fail. The boots then weather safe water proof and built to last. The heel of the boot has static electricity grounding system to then control dissipate any static charge and recycle the static electricity within the system's electronics. The refrigeration controls then are upon the exterior of the   refrigeration unit and are weather safe ( water proof controls).

The hat will also have  a chin strap with adjustable retention.